Drug-driving mother-of-two, 32, who wasn’t wearing her glasses faces jail after mowing down cyclist leaving him with a fractured skull after the anniversary of her premature-born twins’ deaths

A mother-of-two who mowed down a cyclist while driving more than six times the drug drive limit is facing jail.

Lettings agency worker Emily Brown, 32, had snorted cocaine and was not wearing her glasses when her VW Golf hit Stuart Crowther in Oldham last October.

Mr Crowther – who was wearing reflective clothing but no cycling helmet – was thrown over the roof of the car and left with serious injuries including a fractured skull.

Ten months on from the 25mph impact, the 58-year-old still suffers from dizziness and concentration problems and has not been able to return to work as an HGV driver.

Brown, of Royton, near Oldham, failed a roadside drug test and a standard eye test. She said she had been taking cocaine 48 hours before the incident as it was the sixth anniversary of the deaths of her premature born twins.

Tests suggested she had taken the drug as little as 12 hours before the crash due to the cocaine metabolite in her system.

The hearing was told the incident occurred at a road junction after Brown had been out with her youngest child and the girl’s father for a family meal at a restaurant.

Prosecutor Mr Simon Blakebrough said: ‘She was not wearing her glasses which was a requirement on her driving licence and that evening at around 6.50pm Mr Crowther was cycling home from work along.

‘The collision caused him to be thrown onto the windscreen of the VW Golf, onto the roof of the vehicle and subsequently onto the road. The victim was was wearing reflective and clothing, his blue jacket had reflective panels on it. The bike has lights on that were illuminated.

‘She had failed to have regard for obvious road users, had drugs in her system and was not wearing her glasses as instructed.’ 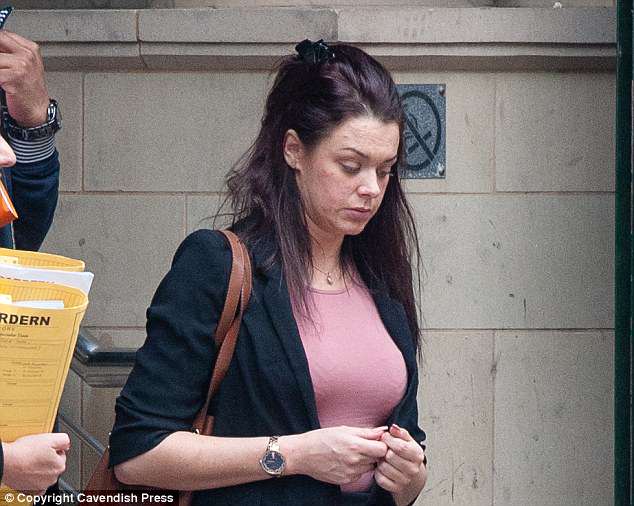 Brown had taken cocaine on the anniversary of the death of her premature twins, lawyers said

He spent three weeks in hospital, where he suffered a number of seizures and was admitted to an intensive care unit. He is still undergoing treatment.

Brown’s lawyer Miss Rachel Shenton told the court: ‘It was also not actual cocaine her system but the metaboliser and this was what put her over the limit.

‘The results suggest she consumed cocaine 12-24 hours prior to the incident but the defendant says she took it on the Monday evening. On that day she went out for a meal and deliberately did not consume any alcohol because she was driving with young daughter in the car.

‘She says her windscreen wipers were on full so it was raining at the time.. She accepts that she was not wearing her glasses and was distracted by her daughter in the car.

‘She has two daughters, and neither of them know about this case. She has been unable to tell them. She told me that she simply won’t be able to tell them that Mummy is not coming home. The impact on her children will be enormous.

Adjourning the case for a report, Judge Bernadette Baxter bailed Brown but told her: ‘I want you to face up to what you did. Sitting here crying will not help your children. You cannot just bury your head in the sand.

‘You need to speak to your family and you need to tell your children what could possibly happen. The fact is that me adjourning does not give any indication on the ultimate sentence where the most likely outcome is still an immediate custodial sentence.’