A mother has been reported to the police for an aggressive foul-mouthed rant at two horse riders while driving down a country lane.

The driver beeps her horn loudly and repeatedly while driving close behind the horses – and on being asked to slow down screams abuse at the rider before yelling: ‘I own the f***ing road.’

Her daughter filmed the incident, which happened near Abergele in North Wales, and even posted it to social media captioned it ‘I think my mar has road rage’

The video shows the driver heading down the country lane with her engine revving, before her way is blocked by two equestrians riding two abreast.

The Highway Code is very clear that motorists should give way to horses, stating: ‘Give them plenty of room and be ready to stop.

‘Do not scare animals by sounding your horn, revving your engine or accelerating rapidly once you have passed them.’

But rather than observing the law of the road the mother sounds her horn loudly and repeatedly, and then shouts at the riders: ‘Where’s your tax and insurance, love?’

She pulls up right behind the pair of horses and shouts the same phrase again, before shouting: ‘Why don’t you clean that sh** up down there that your horse has just left, that’s not very nice.’

Fortunately the horses were not startled.

Earlier in the edited clip – but understood to have taken place moments later – the driver can be heard screaming hoarsely: ‘Do you like that, c***? 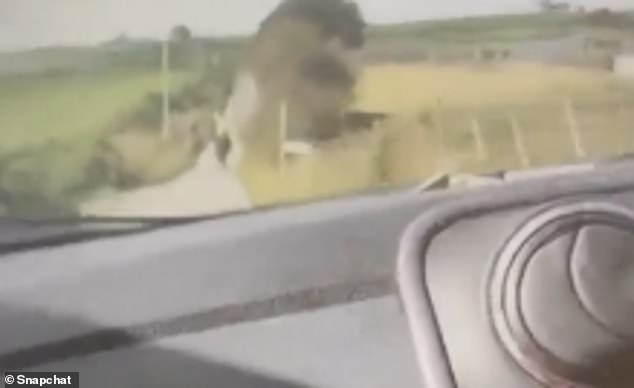 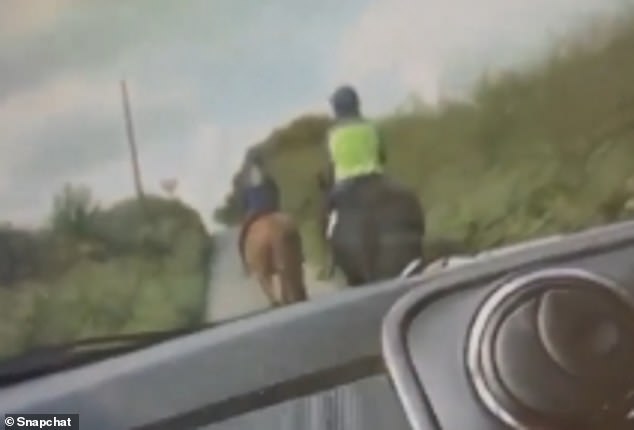 What the Highway Code says about passing horses in a car

Animals: When passing animals, drive slowly. Give them plenty of room and be ready to stop. Do not scare animals by sounding your horn, revving your engine or accelerating rapidly once you have passed them. Look out for animals being led, driven or ridden on the road and take extra care. Keep your speed down at bends and on narrow country roads. If a road is blocked by a herd of animals, stop and switch off your engine until they have left the road.

Horses and horse-drawn vehicles: Be particularly careful of horse riders and horse-drawn vehicles especially when overtaking. Always pass wide and slowly. Horse riders are often children, so take extra care and remember riders may ride in double file when escorting a young or inexperienced horse or rider. Look out for horse riders’ and horse drivers’ signals and heed a request to slow down or stop. Take great care and treat all horses as a potential hazard.

The driver’s daughter uploaded the footage to social media, and captioned the clip: ‘Think me mums got road rage. Take a chill pill bro.’

She also captioned the clip: ‘Some women on her horse tellin me mar slow down [sic]’.

In the final moments of the video the horse riders can be seen on their phones, and the caption on the clip changes to read: ‘Sl**s phoning plod on us’.

MailOnline understands that the two female riders live in a nearby village and they themselves have been the subject of abuse since the video was shared online.

A source told MailOnline the driver, who lives in nearby Llanfair Talhaiarn, is known locally for her aggressive driving and has been reported to the police.

She explained: ‘We have lots of country lanes and it’s getting dangerous.

‘My daughter rides and my heart is in my mouth every time she goes out.