Two sick Labour MPs were made to turn up to the Commons in wheelchairs today for a crunch Commons vote after Tory whips allegedly stopped them being ‘nodded through’.

Naz Shah, the MP for Bradford West, was released from hospital and wheeled through the division lobbies clutching a sick bucket for the vote.

While another Labour MP was also wheeled through to cast their ballot in a vote on whether Parliament should be given a ‘meaningful vote’ if no Brexit deal is done.

Labour blamed Tory whips for making ill MPs physically turn up to vote rather than allowing them to be ‘nodded through’ in a more comfortable part of the estate.

The Tories deny the claims. 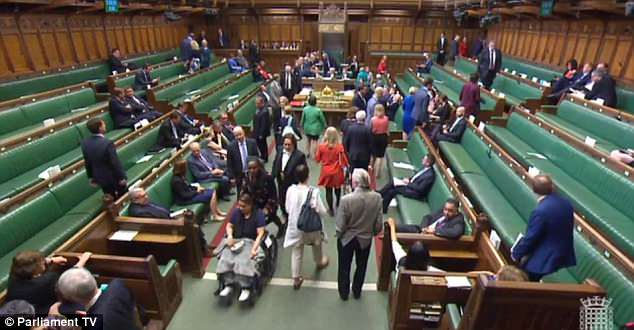 Naz Shah, the MP for Bradford West (pictured in the wheelchair today) was released from hospital and wheeled through the division lobbies clutching a sick bucket for the vote. 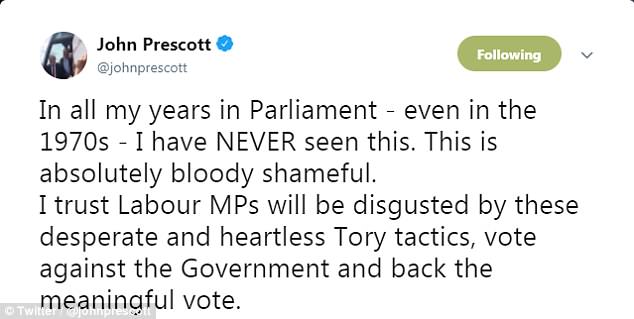 Lord Prescott, the former deputy PM – tore into Tory whips for making the MPs physically troop through the division lobbies despite their ill health

He said on Twitter: ‘In all my years in Parliament – even in the 1970s – I have NEVER seen this. This is absolutely bloody shameful.

‘I trust Labour MPs will be disgusted by these desperate and heartless Tory tactics, vote against the Government and back the meaningful vote.’

He added: ‘The Tory whips are forcing sick people to do this. Lower than vermin.’

Ms Pidcock, the heavily pregnant Labour MP, also had to march through the division lobbies with her hundreds of colleagues.

A spokesman for Jeremy Corbyn confirmed the Government was obstructing sick MPs.

He said: “As I understand it there has been a refusal to pass through people who are not in a state to vote in the normal way.

Meanwhile, heavily pregnant shadow minister Cat Smith, who is just days from her due date, had to miss the vote after she was taken to hospital after a ‘scare’ and has been advised not to travel.

Ms Smith is one of three MPs on the Opposition benches who are in the latter stages of pregnancy. Lib Dem deputy leader Jo Swinson did turn up to vote. Shadow minister Cat Smith, who is just days from her due date, said she was taken to hospital after a ‘scare’ and has been advised not to travel. She is pictured in the Commons last month 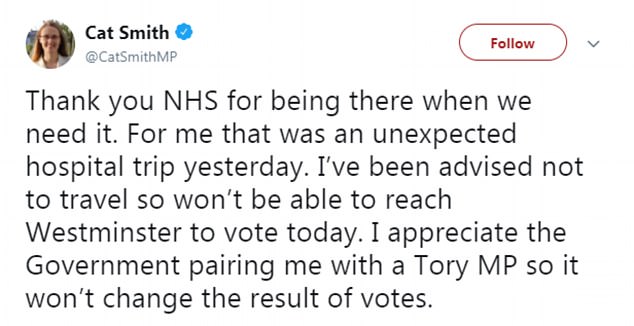 The Lancaster and Fleetwood MP announced her pregnancy with husband Ben Soffa in January. She has said she expects to be back at work shortly afterwards

Under that arrangement, one politician supporting the government will not go through the division lobbies – so they effectively cancel each other out.

And in a further blow to the ill Labour MPs, the amendment they had been forced to turn up to vote for – Tory Mp Dominic Grieve’s amendment on a meaningful vote -failed after a string of Tory rebels ducked out of the clash at the last minute.

It was voted down by 319 to 303  after rebels, including Mr Grieve and Nicky Morgan, were peeled off after a last ditch compromise by ministers.

Posting on Twitter today, Ms Smith, 33, said: ‘Thank you NHS for being there when we need it. For me that was an unexpected hospital trip yesterday.

‘I’ve been advised not to travel so won’t be able to reach Westminster to vote today. I appreciate the Government pairing me with a Tory MP so it won’t change the result of votes.’

She added that the ‘baby gave me quite a scare yesterday but my due date is just days away so we will just be glad when they have safety arrived now’.

The Lancaster and Fleetwood MP announced her pregnancy with husband Ben Soffa in January. She has said she expects to be back at work shortly afterwards.

There is no formal parental leave system at the House of Commons, with neighbouring MPs covering casework for those who need to take time off.

Despite ministers voicing support, proposals for ‘proxy’ voting arrangements for MPs unable to attend are yet to be implemented.