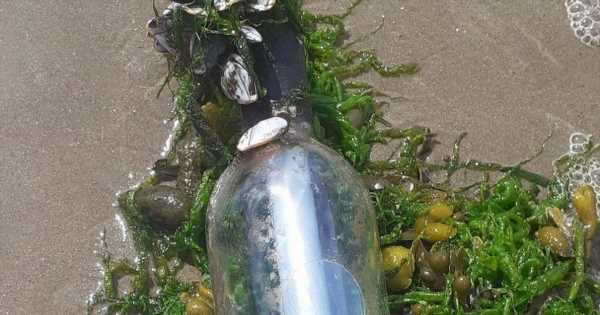 A woman in South Wales has been left stunned after finding a message in a bottle washed ashore on the beach – after travelling an incredible 3000 miles.

Amanda Tidmarsh, 52, from Brynna, made the shocking discovery on the beach in Ogmore-on-Sea while out walking her two rescue dogs.

She said she noticed the bottle tangled up in seaweed – and couldn't believe it when she discovered it had floated there all the way from Canada.

Amanda – who had previously joked with her family that she was "always on the hunt for treasure" – said she was "so excited" when she read the letter inside.

The co-ordinates written on the letter show the bottle was thrown in the sea off the coast of Newfoundland, Canada in November 2020.

She is still waiting to hear back from the crab fisherman who threw it overboard.

Amanda said she was walking her labradoodle Daisy and Jack Russell Ollie when she saw the clear wine bottle, covered in barnacles, mussels and seaweed.

She said: "When I found it I thought it was lovely – got all this way without being smashed. I thought there was something inside it, it's like treasure."

She added she was "so excited" and thought it was "too special to open alone" so waited for her son to come home.

"I could believe it, it was really special," Amanda said. "I text my other son and daughter as they were just as excited as me. It's unbelievable.

"I always joke to my mum that I'm looking for treasure amongst seaweed and I found some."

The note appears to have been written by John Graham, a snow crab fisherman, who left his email address for the finder of the message to contact him.

Amanda continued: "It was well sealed and inside was a zip lock bag rolled up with a note inside.

She said she is "optimistic" that John will get back to her.

But in the meantime, Amanda is keeping the bottle safe in the greenhouse at her house in Rhondda Cynon Taf.

In a similar case, a family boat adventure company became world-famous overnight after its owner found a fascinating message in a bottle dated to 1926.

Captain Jennifer Dowker was cleaning the windows of a small ship when she spotted a worn old bottle at the base of the lake and dived down to find out more.

She was stunned to find a handwritten message reading: “Will the person who finds this bottle give this paper to George Morrow, Cheboygan Michigan."