‘I was made to feel like a criminal’: Mother, 24, who was quizzed by police when her son died at just 19 hours old of pneumonia is awarded £28,700 after NHS admits responsibility

A mother whose baby passed away at just 19 hours old has been awarded £28,700 from the NHS after hospital staff failed to spot he had pneumonia.

Staff at the Royal Oldham Hospital in Greater Manchester failed to notice that newborn Dominic had developed pneumonia and was struggling to breath.

Last week, his mother Chelsea Smith, 24, was awarded £28,700 after the NHS trust responsible for the baby’s care admitted it was at fault.

An inquest also heard how neglect from staff had contributed towards his passing in June 2015.

Just hours after the tragic loss of her first born son, Ms Smith was quizzed by police over the baby’s death. 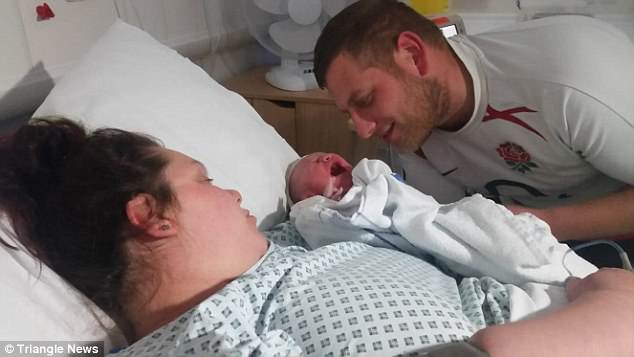 Chelsea Smith, 24, poses with her newborn Dominic and his father Tony, 31

Instead she suffered the tragic loss of her baby and just hours later was being quizzed by police over what had happened.

After losing little Dominic, Ms Smith was shocked to learn that independent investigators had been called into the hospital just two months before she gave birth.

The Acute Pennine NHS Trust, which then ran the Royal Oldham, referred itself for investigation after the deaths of four other babies and two mothers between December 2013 and July 2014.

Ms Smith now now wishes to speak out about the terrible care she received at the scandal-hit hospital where months earlier investigators were brought in to probe a worrying number of deaths on the maternity ward.

The 24-year-old mother added she is certain staff shortages and budgets cuts are helping fuel problems at already over-stretched mother and baby units.

She echoes childbirth charity NCT which suggested last December that maternity care in England was ‘in crisis’. 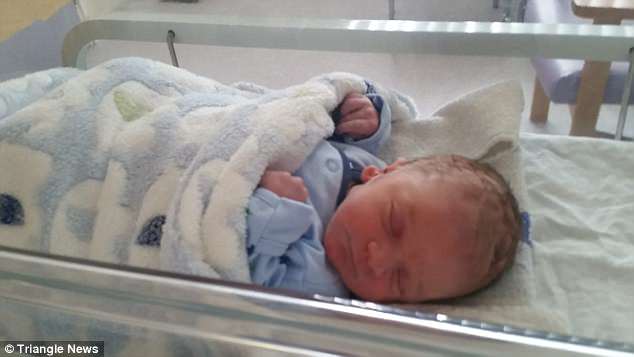 A report found that a total of 276,767 maternity mistakes were logged between April 2015 and 2017 – the equivalent of one for every five births.

While most were minor or near misses, the figures released by NHS Improvement included 288 cases in which either the mother or baby died.

This includes Ms Smith’s case, which could have been avoided if overworked nurses had not made simple mistakes.

Figures from 2016 also show maternity wards were forced to shut their doors 382 times – a 70 percent increase in just two years.

The Royal College of Midwives has blamed the government’s consistent failure to recruit new midwives, with a third now approaching retirement age.

Ms Smith said she was the human face of the government’s failure to get a grip on the issue.

She said: ‘I want to warn other people. People know that I’ve lost a baby but they don’t know why.

‘I’ve never told anyone why.

‘Honest to God, I have constantly asked myself ‘why am I here if he’s not here?

‘The pain has been unbearable. 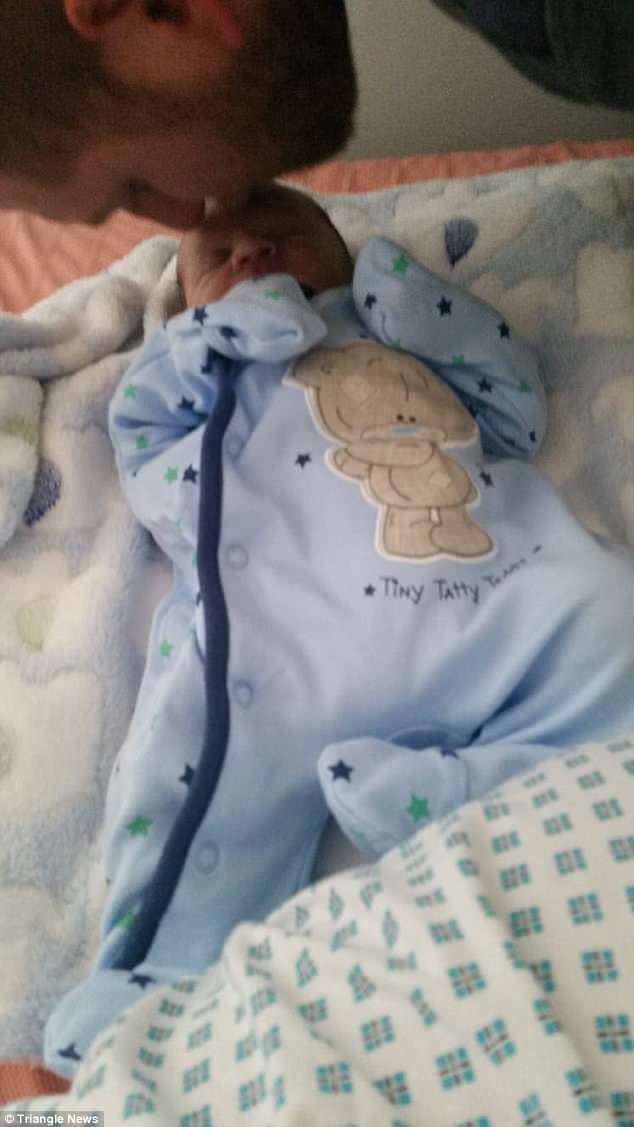 Last week, his mother Chelsea Smith, 24, was awarded £28,700 after the NHS trust responsible for the baby’s care admitted it was at fault

And an internal report published in June 2016 linked short-staffing to a series of deaths, though this did not include Dominic’s.

It stated: ‘The effect of poor staffing numbers in clinics has meant women have fragmented care, suffered long waits and not had appropriate management.’

Now Ms Smith questions why she used the hospital to give birth.

Doctors first failed to notice that her waters had broken four days before she was admitted.

She visited the ward three times complaining that she was in agony but was sent back home.

This staggering failure contributed to baby Dominic’s untimely death, a coroner ruled, as it led to staff missing early warning signs that something was wrong.

After being turned away previously, Ms Smith was finally admitted on June 1, 2015.

Dominic was delivered the next morning weighing 6lbs 14oz after showing signs of distress in the womb. 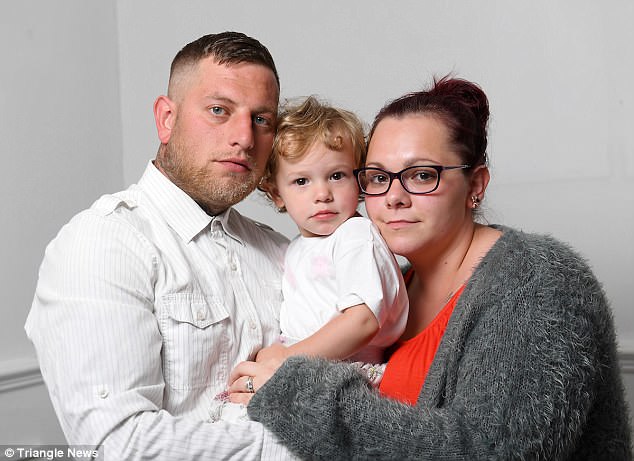 A report showed the the baby was in ‘good condition’ after birth.

Ms Smith said: ‘He was perfect. I was so tired but after he started crying, everything seemed fine.

After family members visited, the new mother and baby both fell asleep for a few hours.

No neonatal observations were recorded, although a midwife noted that the new mother felt hot to touch.

And when baby Dominic started to turn blue at 9pm, a midwife failed to take any action.

A report filed after his death notes that the baby was showing ‘notable signs of deterioration’ at this point, but nothing was done.

‘It was about supper time and a healthcare assistant came in’ Ms Smith said.

‘She said ‘Isn’t he cute!’ and then she just stopped and looked at me.

‘Then she ran out of the room, ran back in, grabbed him and hit a button and ran out. 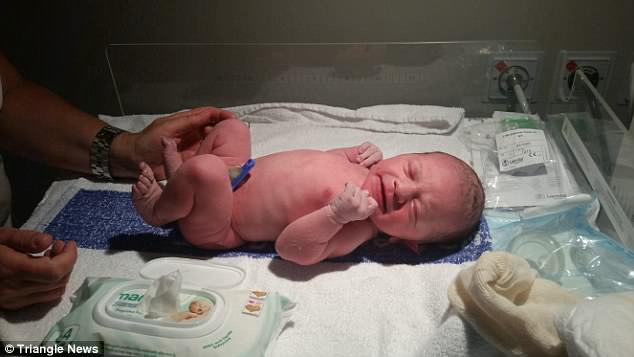 ‘Nobody told me what was happening..

‘Obviously I was panicking and getting upset.

‘Another health care visitor came in and told me that he had stopped breathing.

‘A team ran through straight away and they were working on him for about ten minutes.

‘I got moved into a side room and I rang Tony, who came as fast as he could.

‘One of the midwives said ‘You’ll laugh about this when you’re older. He’s just being a naughty boy. He’ll be fine.’

‘Next thing, they came in and told me that he had died.

‘They said they didn’t want to resuscitate him any longer because he had brain damage.’

‘We didn’t make any sense as we were so upset.

‘I couldn’t be comforted.’

After arranging to have photographs with Dominic the next morning, Ms Smith returned to her hospital bed to get some sleep.

But early next morning, she was woken up and quizzed about Dominic’s death by two officers.

He had died just hours earlier and officers were asking her if she had done something to him. 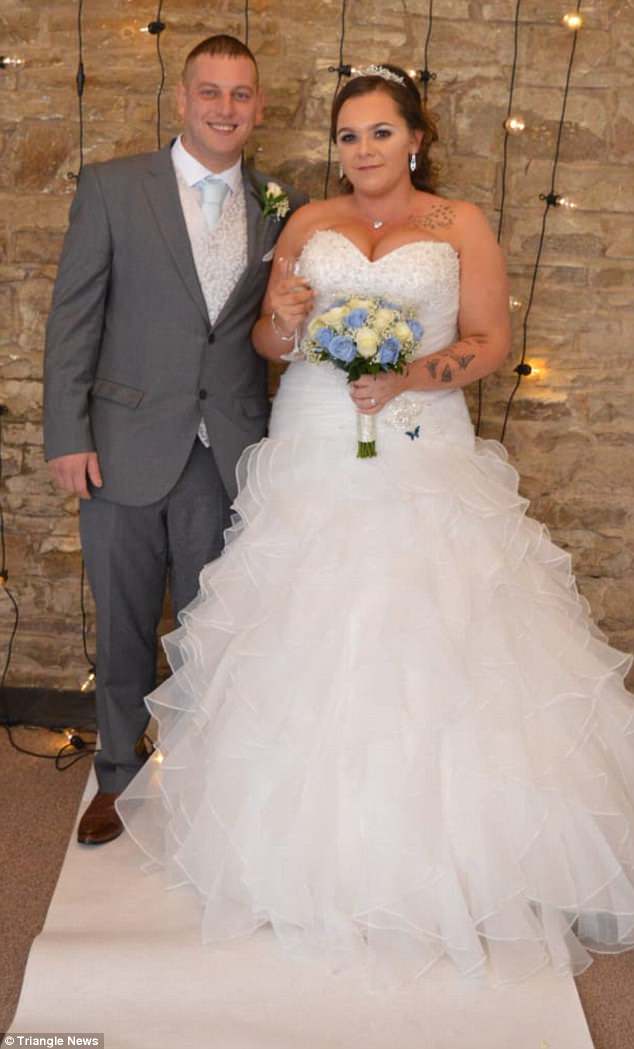 Chelsea Smith, 24 and Tony Smith, 31 on their wedding day

For the new mother and her husband, this was the most terrible line of questioning.

The sobbing pair said they were ‘made to feel like criminals’ as they were quizzed by two officers about what they had been doing in the last hours of their son’s life.

Police asked if the mum had been angry and if she’d alerted staff when he was crying.

‘It was absolutely awful, we just cried our way through it.

‘It felt like we had done something and were being interrogated.

‘When it finished, I told the hospital I wanted to get out.

‘I didn’t want to stay there anymore, I felt like I had been failed in every way.’

The couple returned home but after such an unimaginable loss, they found it hard to cope.

‘I came home and everything was awful. I didn’t want to be there.

‘I felt so guilty. I felt like I’d hurt my baby or done something wrong when I was pregnant.

‘I kept wondering what I had done so badly that I didn’t have my baby.

‘I was struggling, I wasn’t coping well at all. I was drinking a lot.

‘I was blowing all my money on nothing.’

Staff at the hospital initially said that his death was due to cot death.

But a second post mortem insisted upon by the family revealed that baby Dominic’s death could have been avoided.

What is pneumonia and what’s the risk to babies?

Pneumonia is swelling (inflammation) of the tissue in one or both lungs and is usually caused by a bacterial infection.

Common symptoms include a cough, difficulty breathing, rapid heartbeat and a fever.

In the UK, pneumonia affects around 8 in 1,000 adults each year, but it is more common and offers greater risk to the very young and elderly.

Children with usually have sudden symptoms. While unusual in the UK more than one million children die from pneumonia globally.

It showed that he had died of pneumonia which hadn’t been spotted.

At an inquest in June 2016, assistant deputy coroner Lisa Hashmi ruled that neglect had ‘more than minimally’ contributed to Dominic’s death.

Now, Chelsea is still struggling to pick up the pieces of her shattered life.

She became pregnant with her daughter Summer-Ann just a month later in July 2015 in a desperate bid to become a mother.

She said: ‘I wanted to be pregnant again. I wanted to have a baby to hold and feel like a proper mum.

‘Not having my son was so hard. I needed something to keep me sane.

‘Dominic should be at school now. He should be causing more mischief than Summer does.

‘It’s hard. He should be three this year. It’s so hard.

‘It felt like a weight was lifted but I was still so angry.

‘I didn’t have to blame myself any more.’

The hospital, in Oldham, Greater Manchester, has had more than its fair share of scandal.

In November 2016, a premature baby died from a serious infection after doctors failed to administer antibiotics.

A coroner again ruled that neglect had contributed to the tragic death of nine-day-old Daniel Grogan and that medical staff had missed several opportunities to save the baby’s life.

And in January, new figures revealed that in excess of £84m has been paid out in damages for mistakes made by the hospital trust which runs the Royal Oldham since 2012.

After learning of these deaths, Ms Smith fears that the same mistakes are being repeated.

‘I read about those incidents in the papers.

‘And I thought “Oh, we’re not the only ones” It made me so angry.

‘It made me wonder what had been done since those incidents.

‘They might have done their best but they hadn’t fixed it.

‘I wish I had never gone to that hospital.’

Simon Mehigan, Group Director of Midwifery and Gynaecology, said: ‘We would like to express our sympathy to baby Dominic Smith’s parents, family and friends for their loss and apologise to his mum Chelsea for the mental anguish she has experienced since losing her son.

‘We have carried out a thorough investigation into the circumstances surrounding Dominic’s death at The Royal Oldham Hospital on 2 June 2015 and we are sad to say that he did not receive the high standard of care we usually provide, and for that we are sorry.

‘In order to improve we have identified the failings that occurred in baby Dominic’s care and we have introduced a number of improvements to prevent these failings from occurring again.

‘Since 2015, we have strengthened and put in place new leaderships teams across our hospitals with greater focus on service improvements and learning from incidents.’

Erica Stewart, Bereavement Support & Awareness Specialist at Sands (the Stillbirth And Neonatal Death charity), said: ‘When a baby dies, parents and families can feel very isolated as their world can be turned completely upside down.

‘Sands is here to support anyone affected by the death of a baby.

‘This can help to normalise their feelings of grief and reassure them they are not alone.

‘The charity also provides a moderated online community where bereaved parents can log in to a safe space and seek support from each other whenever they might need it.’