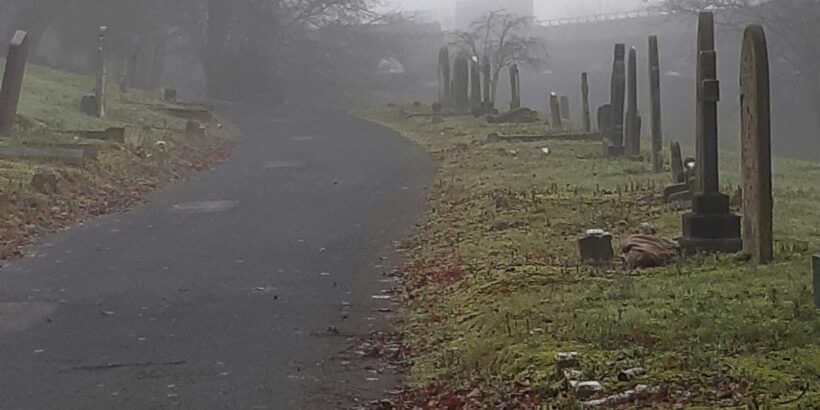 A mourner was left spooked-out after believing she spotted three ghosts as she visited her daughter's grave.

Sam Smith was at Witton Cemetery in Birmingham early on Thursday morning visiting her daughter's grave and decided to capture the foggy conditions by taking some photographs.

But when she got home and looked at the pictures she spotted what she claims are ghostly apparitions.

In one shot, there is a woman dressed in white, in the second image there is a man facing her in long boots.

And in the third there is another figure of what appears to be a woman in Victorian costume.

All of the pictures were taken in the same spot, by the Moor Lane entrance near the M6.

Sam, aged 46,, said she knew Witton Cemetery well, as she used to play in it as a child and is now a regular visitor to remember her ancestors and friends who are buried there.

She goes once a month to visit the grave of her daughter Hannah, who tragically died aged two in 1996 of a rare bowel condition.

"Now I know cemeteries are often spooky with all kinds of rumours of ghosts and paranormal and I am a believer of this," she said.

"I was there yesterday and it was so beautiful and atmospheric with all the early morning fog and mist I decided to take some pictures.

"I was there for several hours and took loads of pictures on my phone and when I got home I looked at them and zoomed in on some and that's when I saw the three figures.

"In three of the pictures there were what looked like apparitions. In the one was a woman dressed in white,like a wedding dress.

"In another picture there's a man facing her in long boots, and in another there's a woman wearing what looks like a Victorian costume."

Sam, who has another daughter, aged 23, said she thought she was "going mad" so showed the pictures to her husband, who agreed there were what looked like ghosts on the images.

"People might look at them and think, oh she's Photoshopped them, but I haven't, I don't know how to use Photoshop and why would I do that?" she said.

"I'd love to know if anyone else has seen or felt something ghostly or weird in that cemetery."