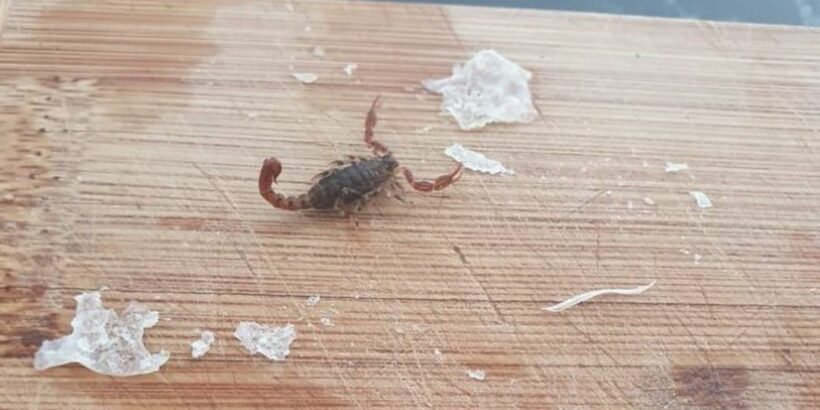 A mum has had the fright of her life after a live scorpion crawled out of the broccoli she had planned to eat for lunch.

Australia is famously a country full of insects, animals and ocean creatures that can easily kill you – but a head of broccoli is not where you'd expect to find them.

The scorpion crawled out from the vegetable and looked around confused before it was captured and released.

The mum, Chloe, who claims she made her purchase in an Aldi branch in Ulladulla in New South Wales, took to a local Facebook group to warn others of her misfortune.

She said: "Just a friendly reminder to check your fresh produce," Chloe wrote in popular Facebook group Aldi Mums, alongside an image of her wooden cutting board, which was home to a sinister sight.

"My [father-in-law] bought a head of broccoli from the [Aldi] Ulladulla store today and after I had cut it up and started cooking it I realised something was crawling around my chopping board. It turns out a scorpion was living in the broccoli."

Scorpions are indigenous to Australia and are mostly clustered in the countryside where the broccoli was grown.

Speaking to 9Honey Kitchen, Chloe said: "I was shocked when I saw it. I'm happy dealing with caterpillars and bugs in fresh produce but was shocked to see a scorpion crawling around.

"He was very much alive and very cranky."

Aldi Australia was soon alerted and just as confused as she was.

In a statement, an Aldi spokesperson said: "We strongly encourage customers to bring issues to our attention directly so we can review.

"Without contact with the customer, we can confirm that it is very unusual, and that this broccoli hitchhiker isn't where they belong — which is likely back on our Aussie producers' farm."