Leidschendam, Netherlands: The case went to trial in a country far from the crime scene with none of the accused in custody. It cost hundreds of millions of dollars to prosecute and employed armies of investigators, researchers and lawyers.

But when the verdict on the most consequential political assassination in Lebanon’s recent history arrived, it left the country without a sense of closure and failed to answer even the most basic question: Who ordered the killing?

For a huge suicide car bomb attack in Beirut in 2005 that rattled the Middle East and killed then-prime minister Rafik Hariri and 21 others, a United Nations-backed tribunal in the Netherlands acquitted three defendants for lack of evidence. 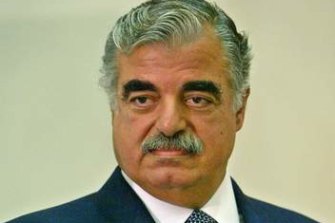 The fourth man, Salim Ayyash, was convicted of participating in a conspiracy to carry out the bombing. But if he is ever apprehended, the court will have to try him all over again since he was tried in absentia.

The long-awaited verdict from the Special Tribunal for Lebanon, which was created in 2009 at the behest of the UN Security Council, disappointed many Lebanese and others who had hoped that an international inquiry would reveal — and punish — those responsible for the crime and break the country's long cycle of impunity for political killings. 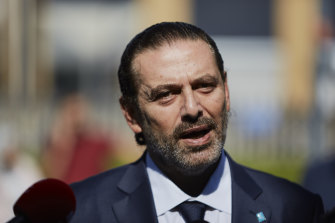 Former prime minister Saad Hariri speaks to the media after the verdict against one of four men accused of assassinating his father.Credit:Getty Images

Saad Hariri, a son of the assassinated politician and himself a former prime minister of Lebanon, attended the session and told reporters after the verdict that he and his family accepted it.

Writing on Twitter, he called it a "historic moment" and "a message to whoever carried out and planned this terrorist crime that the era of using crime for politics without punishment and without a price has ended."

The court announced the verdicts after hourslong statements from its judges summarising the case and the arguments of the prosecution and defence teams. 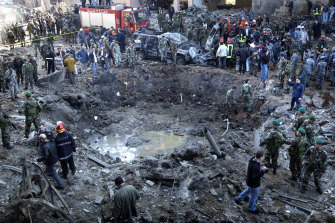 Rescue workers and soldiers stand around a massive crater after a bomb attack that tore through the motorcade of then-prime minister Rafik Hariri in Beirut, Lebanon in 2005.Credit:AP

Months before he was killed, the elder Hariri had resigned as prime minister in anger at Syria's continuing interference in the country, including the presence of Syrian troops.

The judges did not say who had planned the attack but said it was "very likely" that the decision to kill him was made after a February 2, 2005, meeting at which Hariri and other politicians had agreed to call for the "immediate and total withdrawal of Syrian forces from Lebanon."

After he was killed, general suspicion fell on Syria, which denied any role. The brazen attack, which injured hundreds of people and left a yawning crater near Beirut's waterfront, brought more than 1 million protesters into the streets, and the outcry, combined with international pressure, forced Syria to withdraw its troops.

In reading a summary of their 2600-page ruling, the judges said the murder plan relied on a massive load of high-grade explosives and was intended to cause "fear and panic" that would resonate throughout Lebanon and the region.

Hezbollah's leader, Hassan Nasrallah, has repeatedly dismissed the tribunal as a Western conspiracy and has threatened to go after any followers who cooperated with it. The group did not immediately comment on the verdicts, but Nasrallah said recently that it considered the court's finding irrelevant.

The key figure among the suspects, prosecutors said, was Mustafa Amine Badreddinne, a veteran of Hezbollah's special operations and close to its top leaders. But the case against him ended when Badreddinne was killed in Syria in 2016.

To critics of the tribunal, the prosecution of a few low-level Hezbollah operatives is a far cry from the findings of UN investigators who were sent to Beirut soon after the assassination.

In a report, these investigators called the killing an elaborate professional conspiracy that required "substantial logistical support," considerable financing and "military precision in its execution."

Detlev Mehlis, a German prosecutor who led a second inquiry, ended a six-month investigation in 2005 with a list of close to 20 suspects, including several senior Lebanese and top Syrian officials.

Diplomats said at the time that Mehlis had reluctantly ended his mission because he had been warned about two assassination plots against him. At least two Lebanese police officers who assisted the tribunal's investigations have been killed.

The prosecutors built their case largely on circumstantial evidence, much of it extensive records of mobile phones used as operatives covertly tracked Hariri's movements for weeks.

The court-appointed defence lawyers had all asked for acquittals, saying there was no proof that their clients had used the phones in question. Electronic records of hundreds of calls could reveal location, date and time, the lawyers argued, but they did not confirm the identity of the users.

The verdict was originally scheduled for August 7 but was postponed after the Beirut port explosion.

Questions have been raised about the cost of the court's 400-strong staff, including a roster of prosecutors and 11 full-time judges who were involved in the case.

Half of its $US60 million ($82 million) annual budget has been paid by Lebanon, with help from Saudi Arabia, and half by voluntary contributions from Western countries and Arab Gulf states. For many critics, this enormous expense has not justified the symbolism of an absentee trial.

Ehsan Fayed al-Nasser, whose husband, Talal Nasser, headed Hariri's security team and was killed in the blast, said by phone that the tribunal had gathered evidence, identified suspects and sentenced one man.

"I am hoping he'll be arrested and lead us to the mastermind behind this crime," she said.