Reuters journalists Wa Lone and Kyaw Soe Oo were arrested over an investigation into Rohingya killings by military. 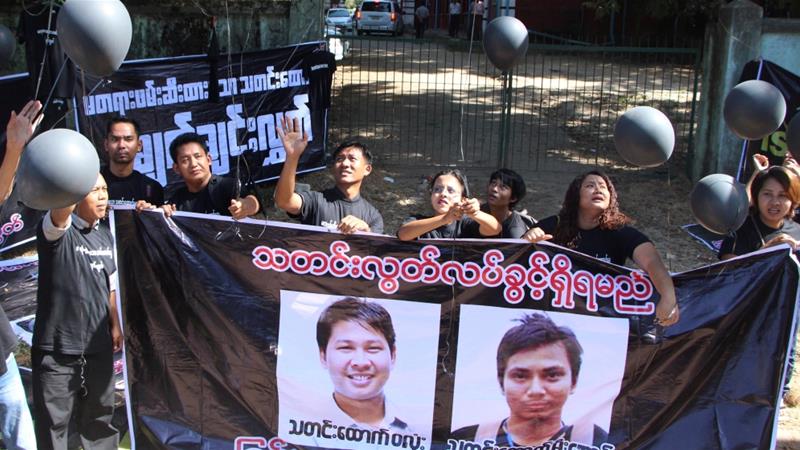 Two Myanmar reporters have appeared in a court 100 days after they were arrested on charges of possessing secret government documents.

The court in Yangon is holding preliminary hearings to decide whether the two journalists, who work for the Reuters news agency, will face charges under the Official Secrets Act – a British Colonial era law that carries a maximum penalty of 14 years in prison.

The pair have been held since December 12, “simply for doing their jobs as journalists”, said Stephen J Adler, president and editor-in-chief of Reuters.

“Wa Lone and Kyaw Soe Oo are exemplary individuals and outstanding reporters who are dedicated to their families and their craft. They should be in the newsroom, not in prison,” he said in a statement.

The pair were arrested over a Reuters investigation into the killing of 10 Rohingya men by Myanmar troops and ethnic Rakhine villagers in the country’s Rakhine State, the news agency said.

The incident occurred during a military crackdown that forced nearly 700,000 Rohingya fleeing into Bangladesh, Reuters said.

Wa Lone and Kyaw Soe Oo were taken into custody after being invited to dine with police officers on the outskirts of Myanmar’s largest city, Yangon.

The reporters told their families they were arrested almost immediately after being handed some rolled up papers by two officiers they had not met before, Reuters said.

Their arrest has sparked global alarm over press freedom in Myanmar.

Diplomats from countries including the US, Canada and the European Union, attended Wednesday’s court hearing.

The Embassy of Denmark, which has sent representatives to each hearing, said the pair had spent “100 days behind bars for ensuring the public’s right to information”, and urged Myanmar to drop charges and release them immediately.