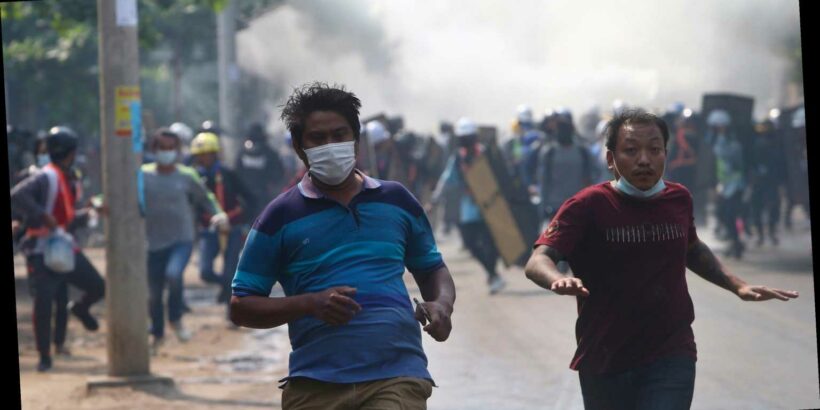 Three deaths were reported in Mandalay, the country’s second-biggest city, and one in Pyay, a town in south-central Myanmar. There were multiple reports on social media of the deaths, along with photos of dead and wounded people in both locations.

The independent U.N. human rights expert for Myanmar, Tom Andrews, said Thursday that “credible reports” indicated security forces in the Southeast Asian nation had so far killed at least 70 people, and cited growing evidence of crimes against humanity since the military ousted the elected government of Aung San Suu Kyi.

Reports on social media also said three people were shot dead Friday night in Yangon, Myanmar’s largest city, where residents for the past week have been defying an 8 p.m. curfew to come out on the streets.

Two deaths by gunfire were reported in Yangon’s Thaketa township, where a protest being held outside a police station was dispersed. A crowd had gathered there to demand the release of three young men who were seized from their home earlier Friday night. Photos said to be of the bodies of two dead protesters were posted online. The other reported fatality Friday night was of a 19-year-old man shot in Hlaing township.

The nighttime protests may reflect a more aggressive approach to self-defense that has been advocated by some protesters. Police had been aggressively patrolling residential neighborhoods at night, firing into the air and setting off stun grenades in an effort at intimidation. They have also been carrying out targeted raids, taking people from their homes with minimal resistance. In at least two known cases, the detainees died in custody within hours of being taken away.

Thousands of people took part in anti-military protests in Yangon, Myanmar, on February 22, despite warnings and violence over the weekend in which two people were killed.

Another possible indication of heightened resistance emerged Saturday with photos posted online of a railway bridge said to have been damaged by an explosive charge.

The bridge was described in multiple accounts as being on the rail line from Mandalay to Myitkyina, the capital of the northern state of Kachin. The photos show damage to part of a concrete support.

No one took responsibility for the action, but it could serve a two-fold purpose.

It could be seen as support for the nationwide strike of state railway workers, who are part of the civil disobedience movement against the coup.

At the same time, it could be aimed as disrupting the ability of the junta to reinforce its troops in Kachin, a state whose residents have long been at odds with the central government. The Kachin ethnic minority fields its own well-trained and equipped guerrilla force, and there has been outrage in Myitkyina at security forces’ killing of anti-coup protesters there.

The prospect of sabotage has been openly discussed by some protesters, who warn that they could blow up a pipeline supplying natural gas to China. They see China as being the junta’s main supporter, even though Beijing has been mildly critical of the coup in its public comments.

In Washington on Friday, the Biden administration announced it is offering temporary legal residency to people from Myanmar, citing the military’s takeover and ongoing deadly force against civilians.

Homeland Security Secretary Alejandro Mayorkas said the designation of temporary protected status for people from Myanmar would last for 18 months. The offer of temporary legal residency applies to people already in the United States. Mayorkas said in a statement that worsening conditions in Myanmar would make it difficult for those people to safely return home.

The Feb. 1 coup reversed years of slow progress toward democracy in Myanmar, which for five decades had languished under strict military rule that led to international isolation and sanctions.

Suu Kyi’s National League for Democracy party led a return to civilian rule with a landslide election victory in 2015, and an even greater margin of votes last year. It would have been installed for a second five-year term last month, but instead Suu Kyi and President Win Myint and other members of the government were placed in military detention.

What you should know: Why is Facebook banning Myanmar military pages?