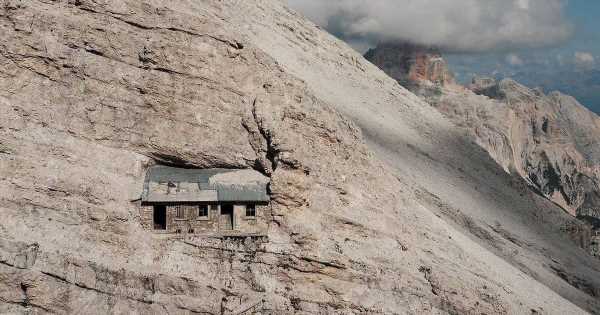 A fascinating hut located high up in the Italian mountains has been dubbed 'the world's loneliest house' after baffling onlookers for decades.

The Buffa di Perrero on Monte Cristallo in the Dolomite Mountains is carved into the side of a sheer rockface, and overlooks a sharp and deadly drop.

It has brick walls, a slanted roof, four framed windows, and a set of camping chairs — leading many visitors to ask the question of how these building materials and objects were taken up to the hard-to-reach structure in the first place.

Climbers can access it via a risky mountain trail or an improvised rope ladder if they dare, but local experts warn that the trek takes a "high level of fitness".

The Via Ferrata, or 'Iron Path' in English, has steel ladders and cables added for especially dangerous parts of the trail up to the mini structure.

It is believed that the cabin was first built more than a century ago by Italian soldiers during World War I, who created the spot to rest, store items, and gain strategic advantage over forces approaching the Austro-Hungarian Empire.

A number of 'bivouacs' like Buffa di Perrero were constructed in the Italian Front of the global conflict, as the two armies clashed on foot and fired heavy artillery into the mountains.

This triggered a number of avalanches, and one incident dubbed 'White Friday' at Mount Marmolada in December 1916 ended up killing 270 Austro-Hungarian soldiers.

Damage resulting from weather conditions remains a hazard in the area, and it was reported by local newspaper Il Dolomiti that the hut had sadly been rendered "unusable" for climbers after the roof gave way.

Images from mountain rescue team of Cortina d'Ampezzo show snow having come through a collapsed roof, with broken pieces of wood scattered around the floor.

Though not currently usable as a rest spot, the Buffa di Perrero still offers a good vantage point for unrivalled views of the impressive Dolomite range.