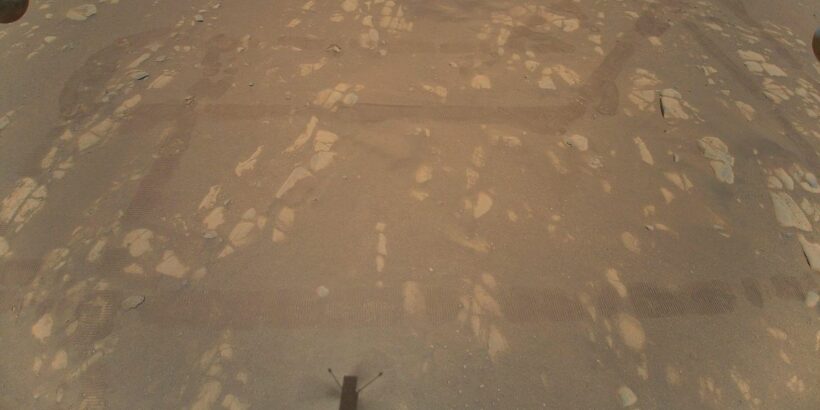 A helicopter sent to Mars by NASA has taken colour pictures of the planet’s surface during a groundbreaking flight.

The space agency spent six years developing Ingenuity, which was carried to the red planet last month on its rover Perseverance.

On April 19, it hovered around on Mars – marking the first controlled flight on another planet.

During another trip on April 22, it took colour aerial photos above the planet.

In the images, the tracks from the Perseverance rover are clearly visible on the surface.

Ingenuity was 5.2m above ground near the “Wright Brothers Field”, where it initially took off.

The chopper took the pictures with a high-resolution colour camera, before they were transmitted back to the space agency.

A NASA spokesman said: “The image, as well as the inset showing a close-up of a portion of the tracks [of] the Perseverance Mars rover and Mars surface features, demonstrates the utility of scouting Martian terrain from an aerial perspective."

News of the initial landing was met by cheers and applause at mission control. The space agency hopes Ingenuity could the way for aerial surveillance of Mars and other destinations in the solar system, such as Venus or Saturn’s moon Titan.

While Mars possesses just a third of the gravity to overcome as Earth, its atmosphere is just 1% as dense – which presented a huge aerodynamic challenge.

To make up for the difference, engineers equipped Ingenuity with rotor blades that are larger [4ft long] and spin more rapidly than would ordinarily be needed for an aircraft of its size.

The design was successfully tested in vacuum chambers simulating Martian conditions at JPL.