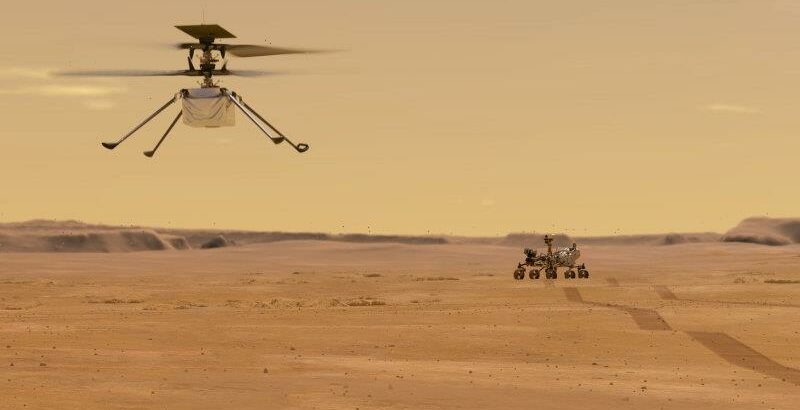 London: Humans have moved a step closer to settling on Mars after oxygen was created on the planet for the first time.

NASA has successfully generated oxygen through an instrument called the Mars Oxygen In-Situ Resource Utilisation Experiment (MOXIE), which is roughly the size of a large toaster. 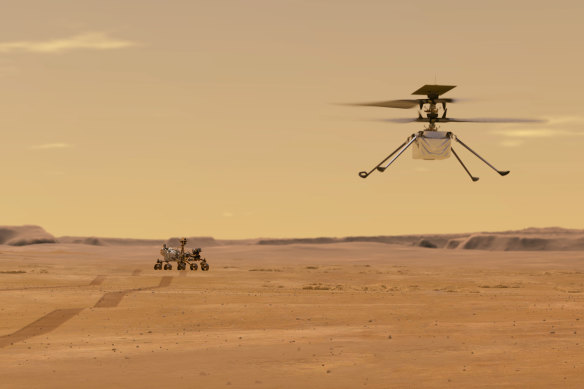 An illustration depicts the Ingenuity helicopter on Mars after launching from the Perseverance rover.Credit:NASA

Mounted to the Mars Perseverance rover, the device works by splitting the carbon dioxide-rich atmosphere.

Any hopes of sending humans to Mars in the next 20 years depend on the ability to make oxygen on the surface for the astronauts to utilise.

MOXIE has been turned on seven times since February 2021 and ran at full tilt for an hour at a time, with each test done in different conditions.

NASA found that about 50 grams-worth of oxygen was made during the seven cycles, which the machine’s builders at MIT say is akin to the productivity of a small tree. 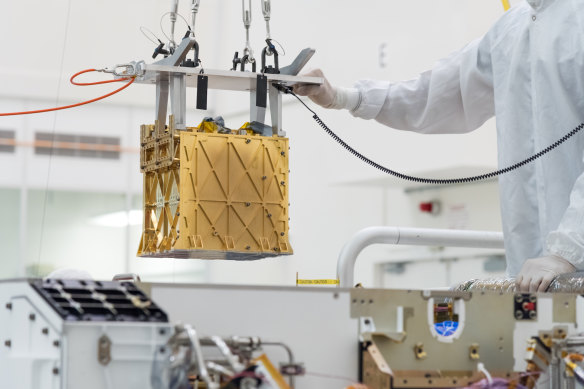 The Mars Oxygen In-Situ Resource Utilisation Experiment (MOXIE) developed by NASA is carefully lowered into the belly of the Perseverance roverCredit:NASA

MOXIE involves a high-quality air filter cleaning detritus from the atmosphere, and then compressing the atmosphere – which is 95 per cent CO2 – to the same pressure of Earth’s air. It is also heated to 800 degrees Celsius and transferred to a custom-built tool called solid oxide electrolysis (SOXE).

SOXE passes electricity from an anode to a cathode to convert the CO² into carbon monoxide and oxygen.

MOXIE twice ran an analysis of the oxygen it had created and found it to be pure as well as meeting the target of six grams of oxygen per hour. 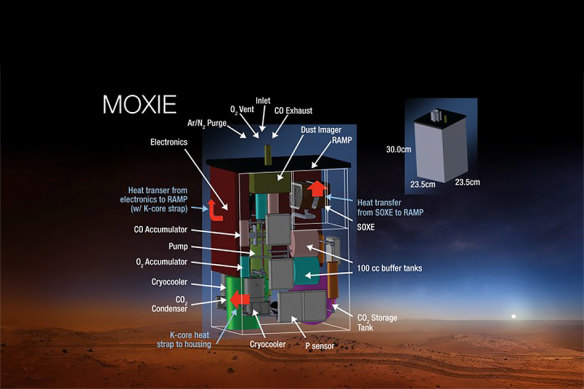 MOXIE is an exploration technology investigation that will produce oxygen from Martian atmospheric carbon dioxide.Credit:NASA

Scientists are trying to manufacture essential materials on different planets, to save having to transport them from Earth.

The atmosphere on Mars is fatal to humans and unable to support life, so reliably producing oxygen is essential to the success of future missions.

The reliability and consistency of MOXIE’s oxygen production has proven the principle, and engineers want to scale it to make several tonnes of oxygen, like a robotic forest. In the future, a ramped-up version of MOXIE may be sent to the Martian surface ahead of a human mission to create oxygen stores.

While it can be inhaled by astronauts, they will also need around 25 tonnes of oxygen to launch a rocket from the Martian surface for any return home.

Instead of running in one hour bursts, the technology would operate around the clock.

Professor Jeffrey Hoffman, the MOXIE deputy principal investigator from MIT’s Department of Aeronautics and Astronautics, called the data, published in Science Advances, “historic”, adding: “This is the first demonstration of using resources on the surface of another planetary body, and transforming them chemically into something that would be useful for a human mission”.

Running MOXIE at various times in the Martian year and during different times of day was a key challenge to prove it can make oxygen under drastically changing conditions.

“The atmosphere of Mars is far more variable than Earth,” Hoffman said.

“The density of the air can vary by a factor of two through the year, and the temperature can vary by 100 degrees. One objective is to show we can run in all seasons.”

Michael Hecht, principal investigator of the MOXIE mission at MIT’s Haystack Observatory, said the only time of day they have not run MOXIE is dawn or dusk, when the temperature is rapidly increasing or decreasing.

However, he said the team had “an ace up the sleeve” to cope with tricky conditions, adding: “Once we test that in the lab, we can reach that last milestone to show we can really run any time.”

NASA hopes to have humans on the Moon within 20 years and Elon Musk, the billionaire founder of SpaceX, hopes to create a permanent colony there.