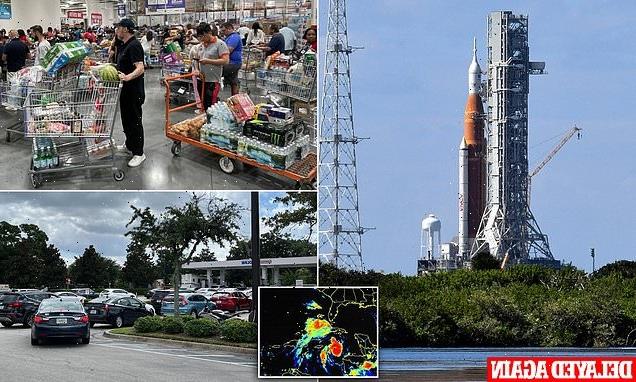 NASA has been forced to postpone the launch of moon rocket Artemis 1 for a third time as Tropical Storm Ian, which could soon become a hurricane, bears down on Florida.

The Tropical Storm has sent panic throughout the state with residents clearing shelves at grocery stores, and now the nation’s space program has felt the fear as well, cancelling the launch that was set for Tuesday.

Artemis 1 is a space launch vehicle designed to bring astronauts and equipment to and from the moon after a 50-year wait. The last manned mission to the Moon was Apollo 17, taking place from December 7 to December 19 in 1972.

The space agency is still deciding whether to bring Artemis 1 back to it’s assembly site, and if they do so, they would not be able to launch during the launch window that ends on October 4.

NASA officials said they would ‘review the latest information on the storm from the National Oceanic and Atmospheric Administration, the U.S. Space Force, and the National Hurricane Center’ and decide on Monday. 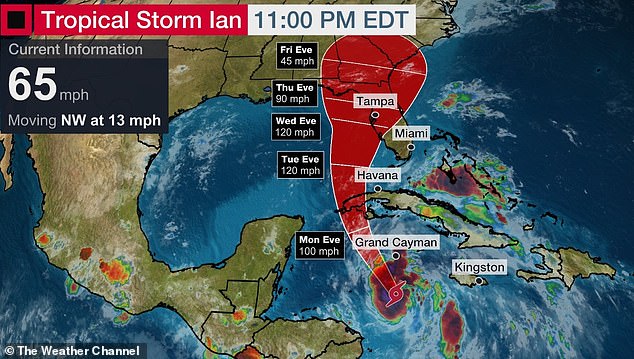 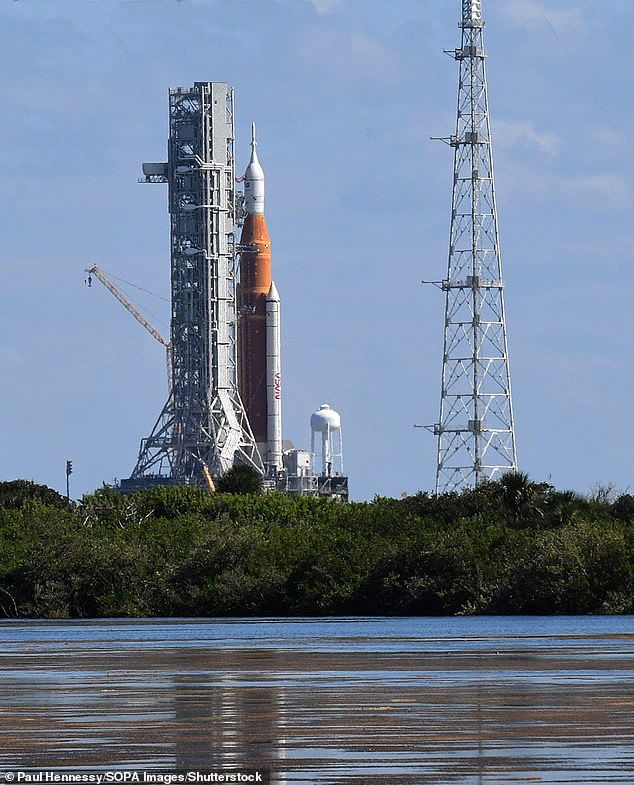 Artemis 1, NASA’s rocket that aims to bring astronauts back to the moon after a 50-year hiatus, has been postponed again due to the impending Tropical Storm Ian 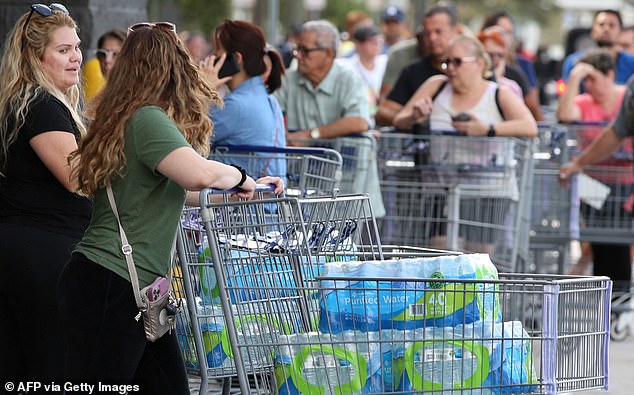 A line of shoppers are seen outside a retail warehouse as Floridians rush to prepare for the storm, which is predicted to be a strong hurricane 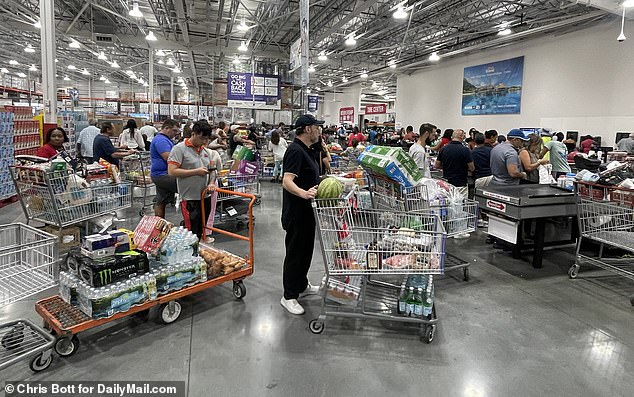 Florida Governor Ron DeSantis declared an emergency across the entire state and its 67 counties on Saturday afternoon, leading to stores full of panicked shoppers

The rocket’s first launch failed at the end of August due to technical glitches, while the second attempt in September was stopped by a fuel leak.

Tropical Storm Ian is expected to strengthen into a hurricane on Monday and reach ‘major’ hurricane strength – anything Category 3 or above – on Tuesday before it hits Cuba.

The storm is expected to make landfall in Florida midweek, either late Wednesday night or early Thursday morning, and bring with it 130mph winds.

‘Ian is going to be a large and powerful hurricane in the eastern Gulf of Mexico and spread its impacts over a large portion of the Florida peninsula,’ said Jamie Rhome, acting director of the National Hurricane Center.

‘The surge vulnerability along the west coast of Florida is very extreme,’ said Rhome, and pointed out ‘it doesn’t take an onshore or direct hit from a hurricane to pile up the water.’

Florida Governor Ron DeSantis declared an emergency across the entire state and its 67 counties on Saturday afternoon in a sign of officials’ high concern.

The cities of Orlando, Panama City and Tampa are all in Tropical Storm Ian’s path, according to the most recent projections The Weather Channel. Parts of Alabama and Georgia are also likely to be affected.

Residents in the expected path have been urged to make hurricane preparations as National Hurricane Center officials warn of the higher-than-normal degree of ‘uncertainty’ in the storm’s forecasted path and intensity.

DeSantis reiterated the uncertainty surrounding Ian’s path, and said ‘just don’t think if you’re not in that eye, that somehow you don’t have to make preparations.’ 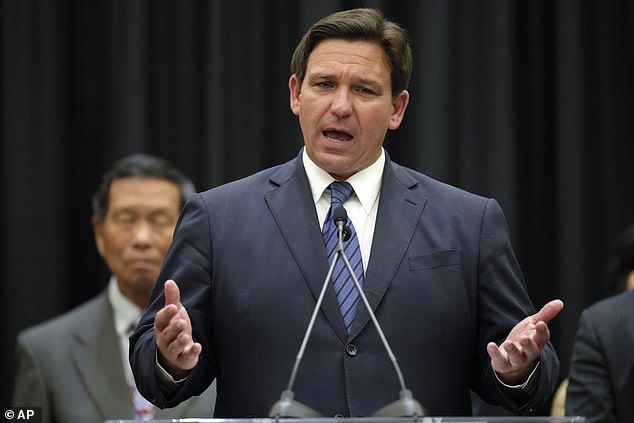 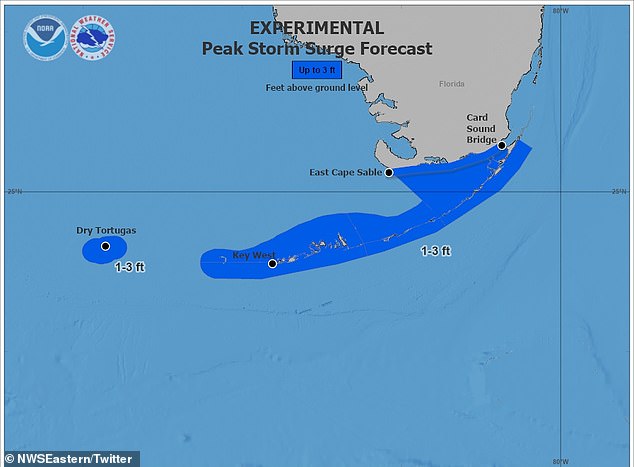 A graphic from the National Weather Service shows potential storm surge depths across southern Florida, and warns they will likely be joined by ‘large and destructive waves’ 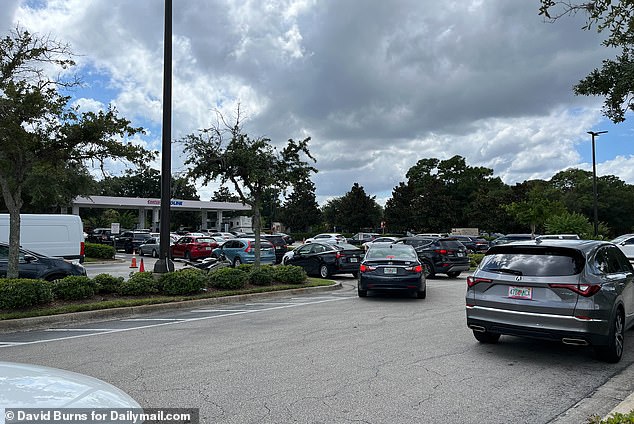 Cars lineup at a Costco gas station in Orlando, Florida as residents rush to stock up on gasoline ahead of the impending storm

The National Hurricane Center issues warnings of storm surges across parts of coastal Florida including the Florida Keys as forecasters predict water levels could rise by several feet.

The Center also predicted that some areas of the state could get up to 6 inches of rain through Tuesday evening and warned of potential flash floods.

John Cangialosi, a senior hurricane specialist, said Sunday that it is not clear exactly where Ian will hit hardest in Florida.

Residents should begin preparations, including gathering supplies for potential power outages, he said.

‘It’s a hard thing to say stay tuned, but that’s the right message right now,’ he said. ‘It’s still time to get your supplies.’

Meanwhile, authorities in Cuba are preparing for Tropical Storm Ian by evacuating some areas of the island and suspending classes at schools on the Western part of the island.

At 11pm EST on Sunday, Ian was moving northwest at 13 mph, about 140 miles south of Grand Cayman, according to the center. It had maximum sustained winds of 65 mph.

President Biden also declared an emergency in Florida and activated federal disaster relief aid for the state, just an hour before he cancelled his Florida visit to campaign with Democrat midterm candidates.