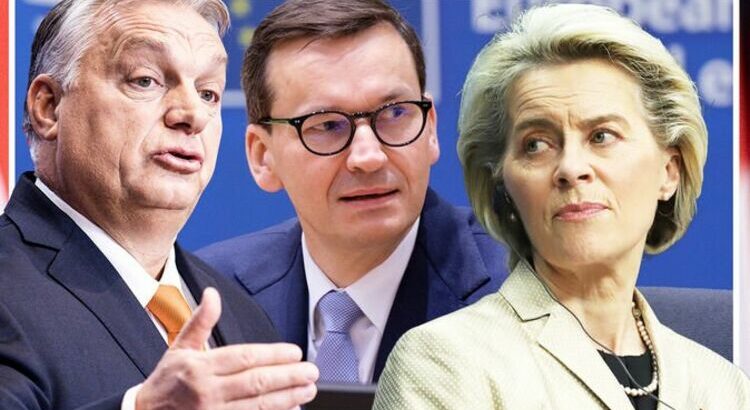 Polexit: ‘Dangers of things getting out of control’ says Meyer

Today (Wednesday), the European Court of Justice (ECJ) reaffirmed that EU law had primacy over those of individual nation. The ruling clears a path for the European Commission to sanction Poland and Hungary, states which have diverged from EU law recently.

Key figures in the EU have become increasingly concerned of democratic backsliding in the two nations.

At the beginning of October, the Polish Constitutional Tribunal ruled that some parts of EU treaties were incompatible with the Polish constitution, challenging European integration.

The EU reacted by fining it one million euros for every day that the ruling was not overturned.

The European Commission said the ruling raised “serious concerns” and said that “EU law has primacy over national law, including constitutional provisions”.

Poland was ordered to pay a million euros (£846,000) for every day it fails to comply with the EU by maintaining its tribunal for hiring and firing judges.

The issue has also held up approval of EU coronavirus pandemic funding, of which it had planned to spend €36billion (£30.1billion) on the country.

The European Parliament previously initiated legal action against the European Commission for failing to use a mechanism, passed last year, to withhold EU funding.

However, it can only be activated if there is a clear risk of misuse of EU money due to such violations.

European Commission president Ursula von der Leyen has previously indicated that she would be willing to activate the mechanism, but was awaiting a ruling from the ECJ on the legality of the tool.

The ECJ today dismissed challenges by Poland and Hungary against the use of the tool – a ruling that cannot be appealed.

Robert Kimbell, a Brexiteer and leader of the Time Party, commented: “All EU member states must watch now as national sovereignty disappears.”

He also asked: “Could the Visegrád Group — the Czech Republic, Hungary, Poland and Slovakia — leave the EU?”

Viktor Orban, the Hungarian Prime Minister, has said that the issue may split the bloc further.

He previously stated: “The European Union only has a future if we can stay together in spite of our growing cultural estrangement.”

Reacting to the ruling, Piotr Muller, the Polish government’s spokesperson, said it “confirms a dangerous tendency of the top EU court and the bloc institutions to go beyond EU treaties.”

He claimed that there were no grounds to withhold funds from Poland.

Poland’s Constitutional Tribunal ruled in October that the Polish constitution had primacy over some parts of EU laws and court rulings.

This allowed the country to continue to have a disciplinary process for judges.

Critics say that the right-wing Government installed like-minded judges onto the Tribunal, so it could dismiss justices.

The decision by the Constitutional Tribunal was welcomed by Jaroslaw Kaczynski, the leader of the largest party in Poland’s governing coalition, at the time.

He said that any different ruling would effectively mean that “Poland is not a sovereign state”, and insisted that the EU had no right to interfere in the country’s administration of justice.