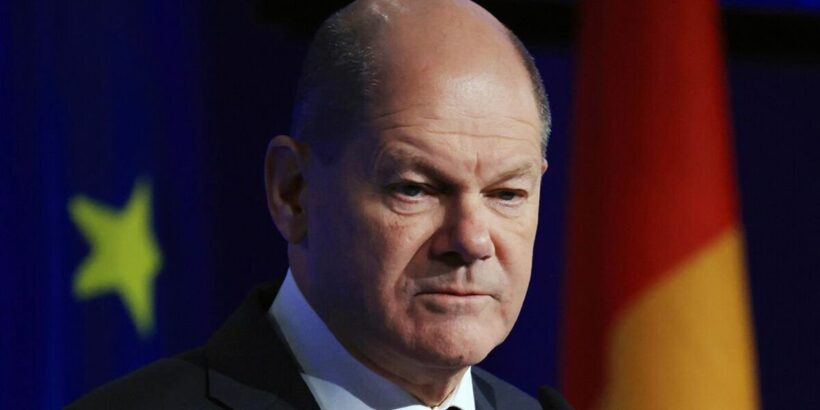 Germany has been facing pressure to maintain its defence commitment to NATO while providing Ukraine with the necessary weaponry to fight back against Russia. According to local reports, the German Army has been left with only “two days” worth of ammunition to sustain active combat if necessary. German affairs expert Oliver Moody noted Berlin is not the only NATO country to have been left facing stock issues as he noted the end of the Cold War nearly 30 years ago ushered in a change towards more technological types of warfare, leaving ammunition stocks thinner.

“It’s a problem across much of Europe. Basically, defence spending was cut in many European states after the end of the Cold War and then, particularly over the past two decades since 9/11, there’s been a sort of configuration towards smart munition for things like counterinsurgency, high-tech, asymmetric conflicts.

“And then with the advent of the war in Ukraine, obviously very large volumes of ammunition, in particular, these 155 millmitre artillery shells have been transferred to the Ukrainian Armed Forces.”

Mr Moody continued: “What is distinctive about Germany is partly that the problem has been known about for so long, partly the sheer scale of it in that it looks like they’re going to need to spend at least 20 billion euros on replenishing their stocks just to meet the minimum NATO requirements.

JUST IN: ‘How dare she!’ Von der Leyen condemned for likening IRA to Ukraine freedom fighters

“And then finally, that the response has been so slow that they haven’t really put in any meaningful orders yet.

“They’ve only got 1.1 billion allocated for ammunition over the coming year despite having a 100 billion investment fund for their armed forces.”

Germany underwent a historic shift following the invasion of Ukraine, announcing plans to send weapons to support the Kyiv Government in its pushback against Russia shortly after the invasion began in February.

But Olaf Scholz’s decision ignited a domestic skirmish that to this day has left Germany’s stance on the war in Ukraine split.

Berlin has become Ukraine’s third-largest weapons provider since the start of the war yet has imposed a veto on sending over tanks, or allowing countries using German-made tanks to dispatch them.

Wolfgang Schmidt, Head of the Federal Chancellery, noted there were two main reasons not to have German tanks sent over to Ukraine.

Mr Schmidt argued the necessary supply chains and repair systems would take too long to set up considering the pace at which the pace was being fought.

And more notably, Berlin remains set on keeping Russia from finding an excuse to further sell its “special operation” in Ukraine as a response to an attack from NATO.

Brexit tax deal with Brazil opens door to trade agreement [REVEAL]
Biden is embracing Macron because he knows it will irritate British [INSIGHT]
‘President Trump will be back in White House by 2024, all signs show’ [REACT]

He said: “If tanks were captured with the German Iron Cross it would be the perfect occasion for Russian propaganda to say, look, this is NATO attacking us.”

Mr Schmidt also pointed out that no other country, including the United States, had so far made any effort to send tanks to Ukraine.

But Germany’s hesitation has sparked the ires of Ukraine in recent months, with Kyiv questioning its commitment in a furious slapdown.

Foreign Minister Dmytro Kuleba wrote in September: “Disappointing signals from Germany while Ukraine needs Leopards and Marders now — to liberate people and save them from genocide.”

The Ukrainian politician insisted there was “not a single rational argument on why these weapons can not be supplied, only abstract fears and excuses.”

He added: “What is Berlin afraid of that Kyiv is not?”