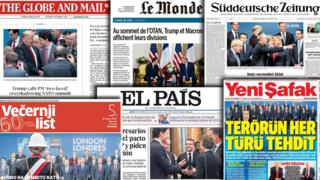 It’s the “reckless” behaviour of Nato leaders that concerns many newspapers internationally after the summit, despite efforts to end the acrimony.

Alliance chiefs agreed to appoint a group of experts to conduct a strategic review over two years to prepare the Western alliance for the future. But the 70th anniversary meeting also saw several bitter rows.

A scathing commentary from German broadcaster Tagesschau brands US President Donald Trump, France’s Emmanuel Macron and Turkey’s President Erdogan as “reckless” for “pursuing their goals in an uncompromising manner with little regard for their allies”.

“The meeting leaves behind the impression of a troubled, fractious Nato. The allies have failed to fill the deep gaps. The egos of individuals harm the alliance. Currently, it is these three presidents – Trump, Macron, Erdogan – who are ruthlessly pursuing their own paths, creating uncertainty in the alliance.”

The National Post says it was “not really the finest moment for either leader”, but one which could have consequences for the government in Ottawa.

“Whereas in any other moment of history, you’d expect this to be the end of it,” it argues, “with Trump, you can’t make that bet.”

The Globe and Mail goes further, suggesting Mr Trudeau should have known better. Most world leaders, it says, have recognised they need to be the adults in the room with Mr Trump, and Mr Trudeau was “caught on video acting like a teenage boy”.

On the delicate summit choreography, France’s Le Monde says “everything had been done to avoid an explosion” and to show that the alliance is not “obsolete” – as Mr Trump said in 2017 – nor is it “brain-dead”, as Mr Macron said last month.

“A ‘strategic review’ will be launched. Nato will survive this ordeal. If there is one thing people know how to do in this organisation, it is how to avoid problems and look for the lowest common denominator. This time, the lowest denominator is not to lose the Turks and not to anger Trump,” Le Monde says.

Yeni Safak says Turkey’s pressure forced the Nato declaration to recognise “all types of terrorism”. Others note Ankara’s retreat on a threat to veto a key Baltic defence plan unless the alliance recognised the Syrian Kurdish fighters as terrorists. Cumhuriyet calls it a “Step back in London” and Birgun says Ankara failed to get what it wanted. “The summit started with a crisis and ended with a crisis,” it states.

Spain’s El Mundo suggests challenges posed by China may help unite the fractured alliance. “This is the first time in its history that Atlantic leaders have put the Asiatic giant in sight. Many hope that this challenge will revive understanding and align the 30 members in the same direction.”

Italy’s Il Messaggero takes a moment to stand back from the fray. “There is a point of view that, at the age of 70, Nato faces the same challenges that were neatly summed up by its first Secretary General, Lord Ismay, in 1952: ‘To keep the Russians out, the Americans in and the Germans down.’ In other words, to consolidate the special political and military relationship with the USA, hold off the Russians and prevent the emergence of new hegemonies inside Europe.”

The paper’s editorial suggests that given new challenges from Russia, China and Turkey, “it is necessary to re-invigorate the alliance to prevent a situation where Europe will be without adequate protection”.

For its part, Russia’s Rossiyskaya Gazeta pours scorn on the summit. “Macron’s attempts to persuade Nato partners into establishing strategic dialogue with Russia failed… So EU countries said ‘Yes’ to Europe turning into a legitimate aim for Russian missiles in the event of a military conflict,” it says.

And in China, the Global Times says a bid to define China as a “strategic challenge” tore a rift between the United States and its allies. “It would be a serious mistake to use the China issue as a respirator for Nato’s survival. Nato can’t hide its illness let alone rely on desperate measures as a cure,” the paper’s editorial says.