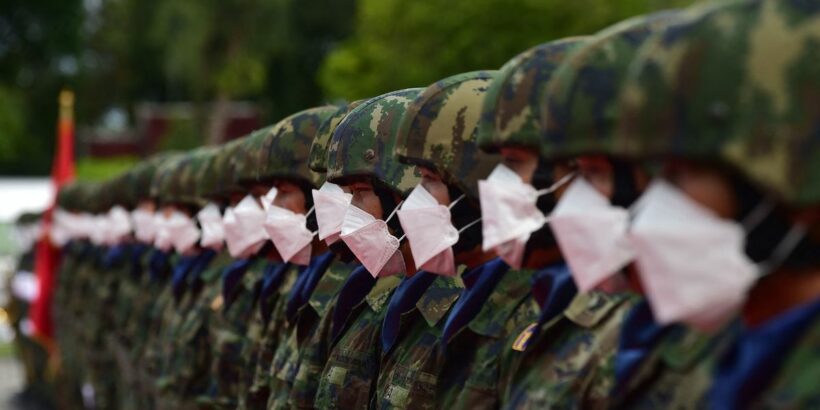 A navy officer in Thailand was jailed after footage of him allegedly forcing new recruits to drink human semen went viral online.

The clip is said to have been filmed at a naval training camp in Chon Buri Sattahip, Thailand, last October but the now-viral clip only surfaced recently.

In the video, a sergeant is reportedly shown punishing new conscripts by forcing them to chug a drink of semen mixed with fish sauce, with the bizarre and disturbing punishment caught on camera.

Petty Officer Second Class Taksin Ngokpilai has been accused as the man force-feeding his new recruits and has been detained for 30 days.

A royal navy representative said that Ngokpilai would be detained for 30 days and that he will be discharged from the service at a later date.

Superiors of the Second Class officer are also reportedly set to be suspended, with the commander of the Royal Thai Marine Corps' Security Department for seven days and the head of department's command and service company for 15 days.

The conscripts featured in the video are said to have completed their six months of training and have since been discharged from service.

Military conscription in Thailand is mandatory for those over the age of 21.

The system for the country sees 21-year-olds and older entered into an annual lottery system, where they draw a "red" card meaning two years of service, or a "black" card, meaning exemption.

Alternatively, those eligible for the draft can volunteer their services and receive a shortened tenure in the military, Vice reported.

Royal Thai Navy vice admiral Pokkrong Monthatphalin apologised to the conscripts and their families for the alleged abuse, with Monthatphalin claiming the navy never had a policy of using violence as punishment.

A navy fact-finding panel found that the allegation had grounds, with Taksin detained for 30 days and set to be discharged.