Inches from DEATH: Couple have a lucky escape as four tonne cylinder slips from crane and smashes straight onto their car

This is the shocking moment that two passengers made a lucky escape from an construction accident in Thailand.

If their white Mercedes car had stopped just an inch further ahead then a falling four tonne steel pile could have crushed them inside the vehicle.

In the incredible footage, recorded on dash cam by a car in the queue of traffic behind, a huge cylinder can be seen falling from the grip of a claw crane. 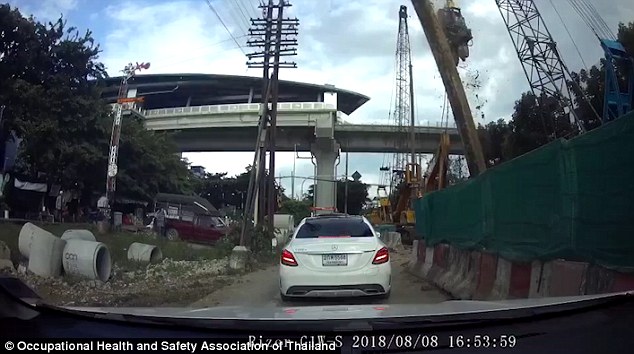 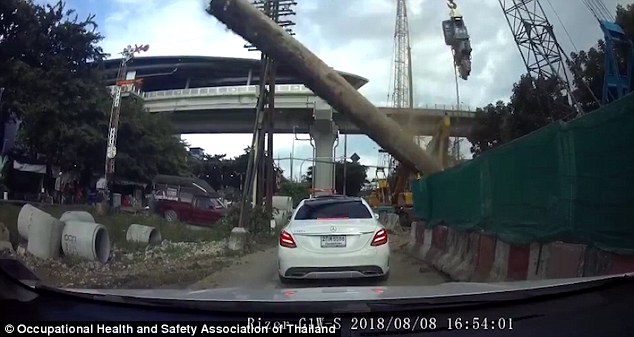 A four tonne steel pile slipped from a claw on a crane and came crashing down on to the bonnet of their car, narrowly missing the roof above them

As it hits the bonnet of the Mercedes the rear of the car raises up making the lights flash.

A man and a woman get out visibly stunned at what’s just happened, in the video shared on Liveleak.

The man makes his way around to the lady, dressed in red trousers and a white top, and embraces her as she bends down in distress.

Construction workers can be seen walking over to the car and pointing at the crane, equally as baffled at what just happened.

Both of the passengers were shaken up after the terrifying incident but weren’t seriously hurt.

One of them is said to have wrist injuries and gone to hospital for treatment.

The accident is believed to have happened on a road along the Bang Khun Nok Railway in Thailand Bang Khunmat district.

The video, that was shared on The Occupational Health and Safety Association of Thailand’s Facebook page, has already hit 915K views and been shared 6.1K times. 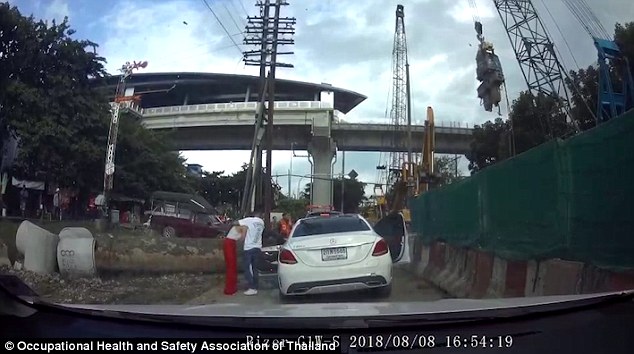 Both the man and woman didn’t receive any serious injuries. After the impact they got out of the car and the man embraced the woman who was clearly shook up