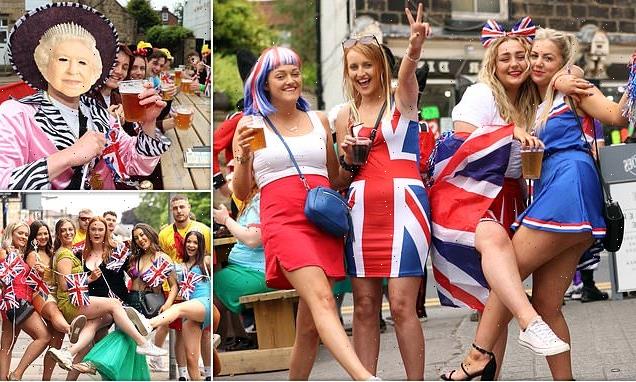 **What are YOU doing to celebrate the Platinum Jubilee?**

Britons across the country are celebrating day three of the Queen’s Platinum Jubilee today ahead of the Party at the Palace this evening.

Up and down the country, local streets have been covered in red, white and blue just like they did for Her Majesty’s Coronation in June 1953.

Families and neighbours have all joined together to celebrate the Queen in her 70 long years reigning Great Britain, and the country as a whole has pulled no punches when it comes to decorating with miles of bunting and Jubilee memorabilia.

While there are clouds and some risk of showers in parts of the south of England, large parts of the country is expected to be dry with sun this afternoon meaning preparations are well underway for the third day of celebrations.

The concert is the highlight of the third day of public events to mark the 96-year-old monarch’s record-breaking Platinum Jubilee with 22,000 people set to attend in person outside Buckingham Palace.

Motown legend Ross, performing for the first time in Britain in 15 years, is a star attraction at the event, to be held on a purpose-built 360-degree stage outside the queen’s central London residence. Britons across the country are getting ready to celebrate day three of the Queen’s Platinum Jubilee today ahead of the Party at the Palace this evening. Pictured: The community in Sidmouth, Devon, gather for a party on day three of celebrations Local residents in Blackpool get in the Jubilee spirit by holding a street party to commemorate the Queens Platinum Jubilee. Pictured: Rory Roberts, age 4, Maggie-Mae White, aged 3, and Darcy Roberts, who is seven, dressed for the occasion 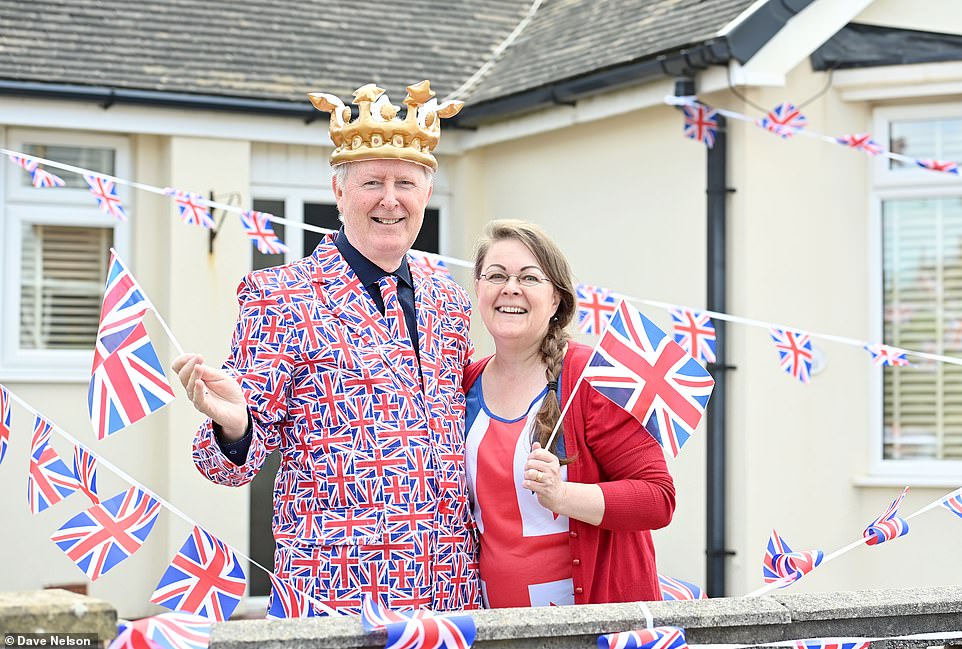 Patriotic: Elsewhere in Blackpool, residents have spared no expense decking their street out with red, white and blue bunting 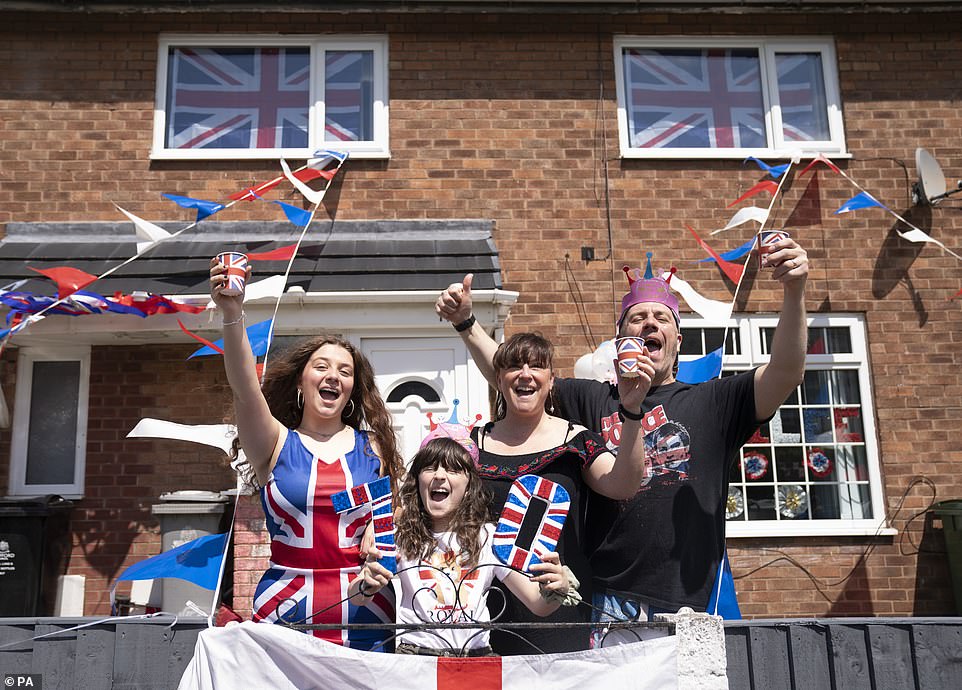 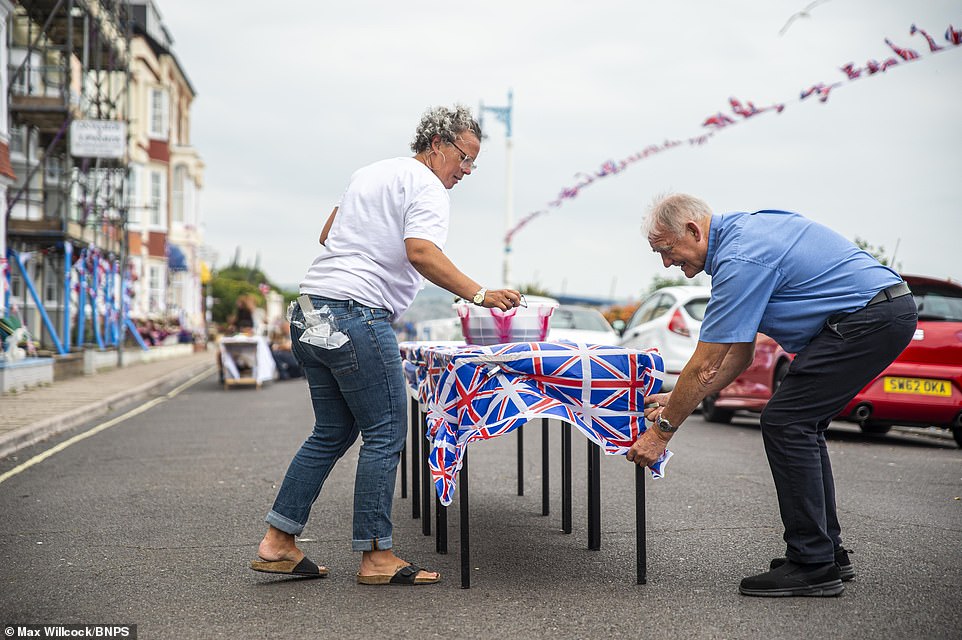 Pictured: Residents pin down the Union Jack tablecloths. Residents battle strong winds to set up their delayed street party on Brunswick Terrace on the seafront in Weymouth, Dorset, as the weather turns on the third day of celebrations

The queen – the longest-reigning monarch in British history – is not expected to attend the two-and-a-half-hour event in person but will instead watch on television at Windsor Castle.

Her heir Prince Charles, 73, and his eldest son, Prince William, 39, will be in attendance. 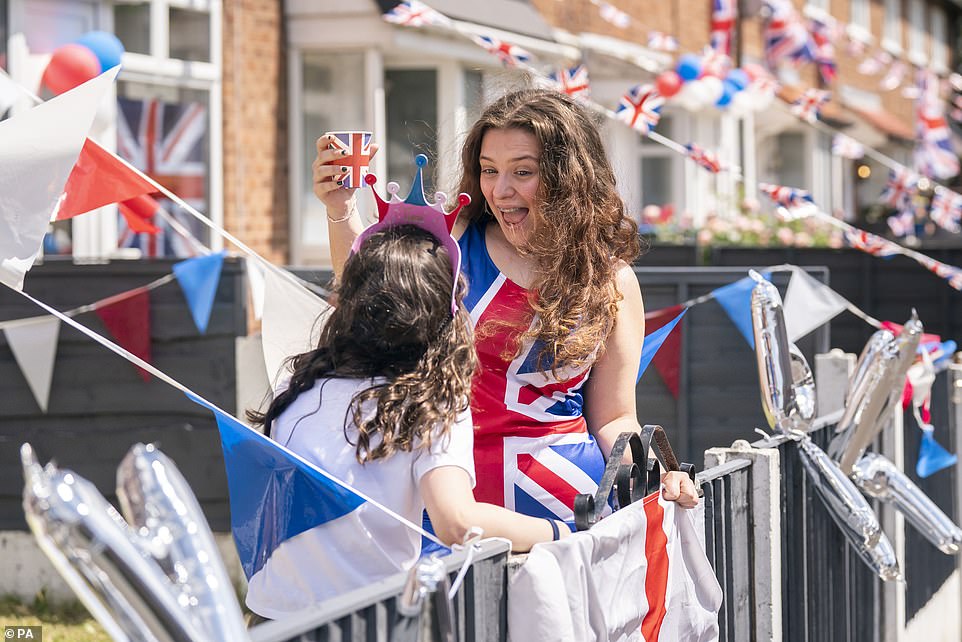 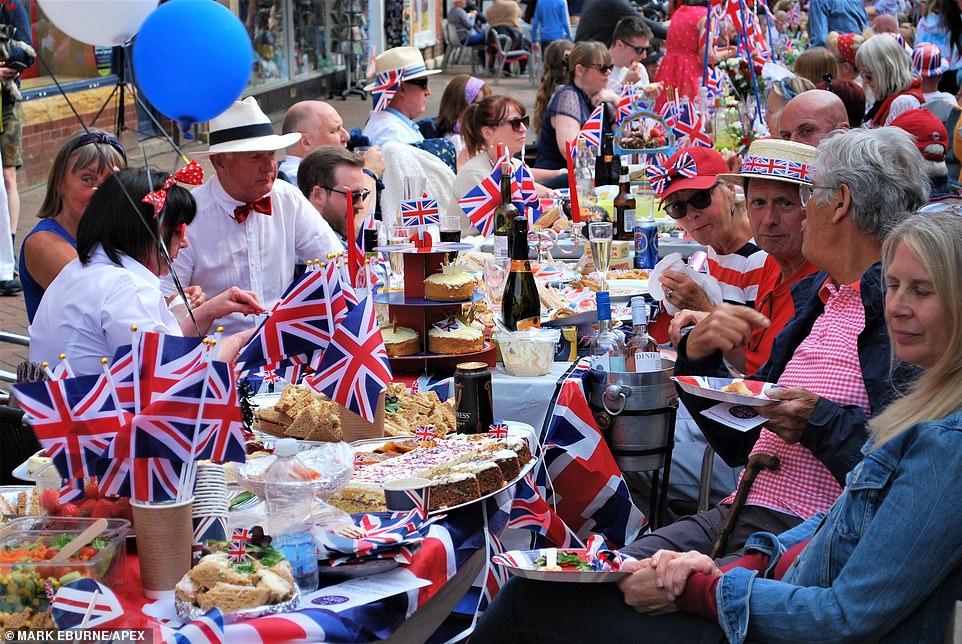 Bunting at the ready: Neighbours in Sidmouth, Devon, enjoy cakes, sandwiches and desserts on day three of celebrations 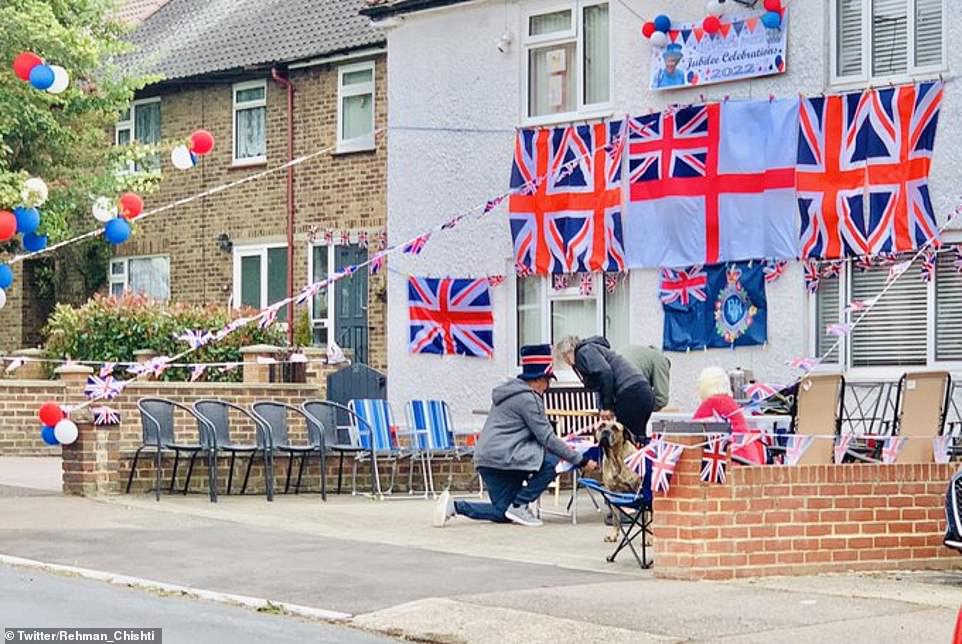 Getting ready: In Kent, Conservative MP Rehman Chishti shared pictures of a street party being held in Twydall (pictured) 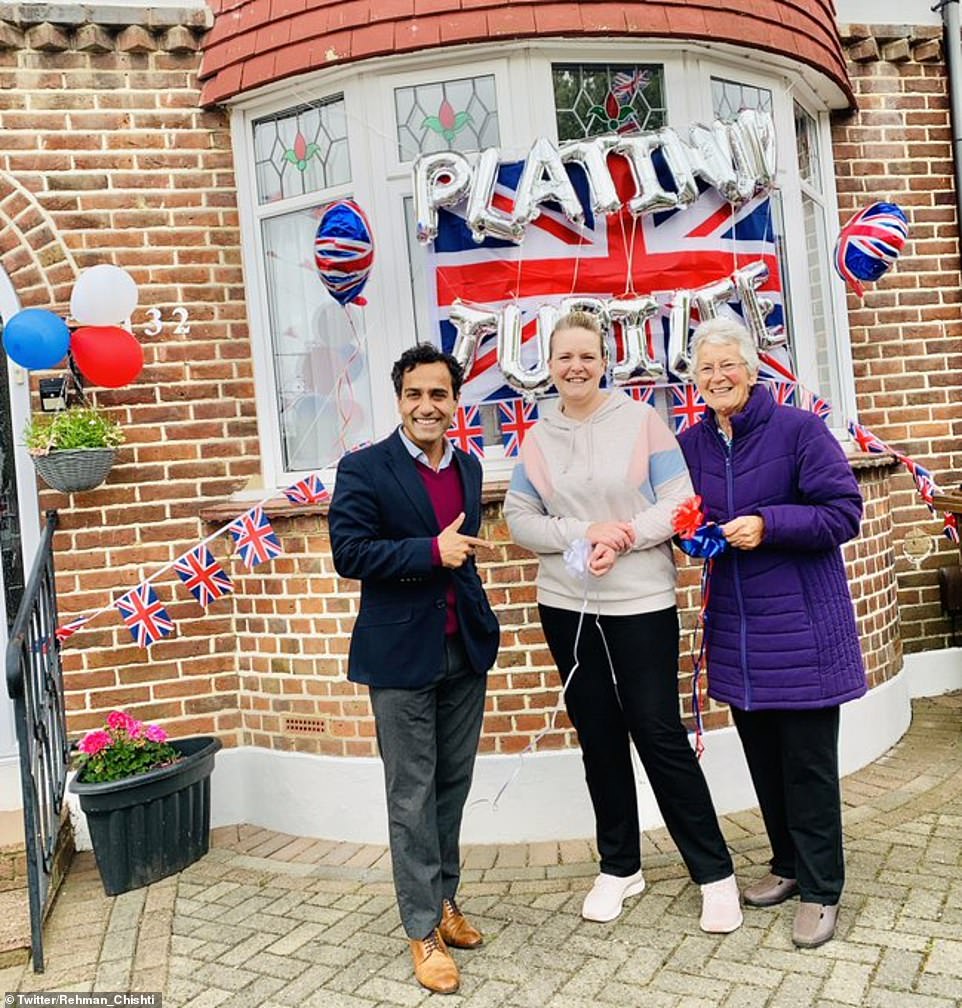 Residents in Kent have decked out their homes in red, white and blue bunting in preparation for their jubilee party today

They are part of a series of major events scheduled for the four-day extravaganza, which began on Thursday with Trooping the Colour and a jaw-dropping 71-aircraft Flypast, and which will end on Sunday with a special Pageant celebrating the life of the nation’s longest-reigning monarch.

Royal Family members will also visit every corner of the UK over the weekend for official engagements – with William and Kate going to Wales; Edward and Sophie travelling to Northern Ireland; and Anne to Scotland.

Meanwhile, families, friends and neighbours are joining in with the pageantry and dressing their homes and streets in red, white and blue bunting, setting up marquees and long tables in preparation for day three street parties.

Residents in Blackpool were taking advantage of the good weather and getting in the patriotic spirit with dozens of street parties set to take place today. 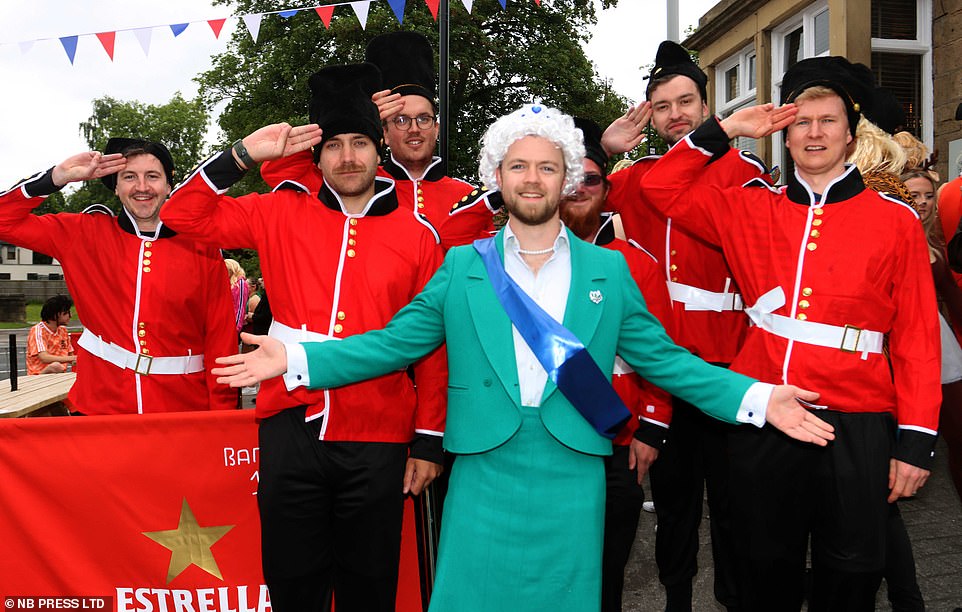 In Leeds, revellers got in the mood for the jubilee by donning royalty-themed fancy dress to celebrate the Queen’s jubilee 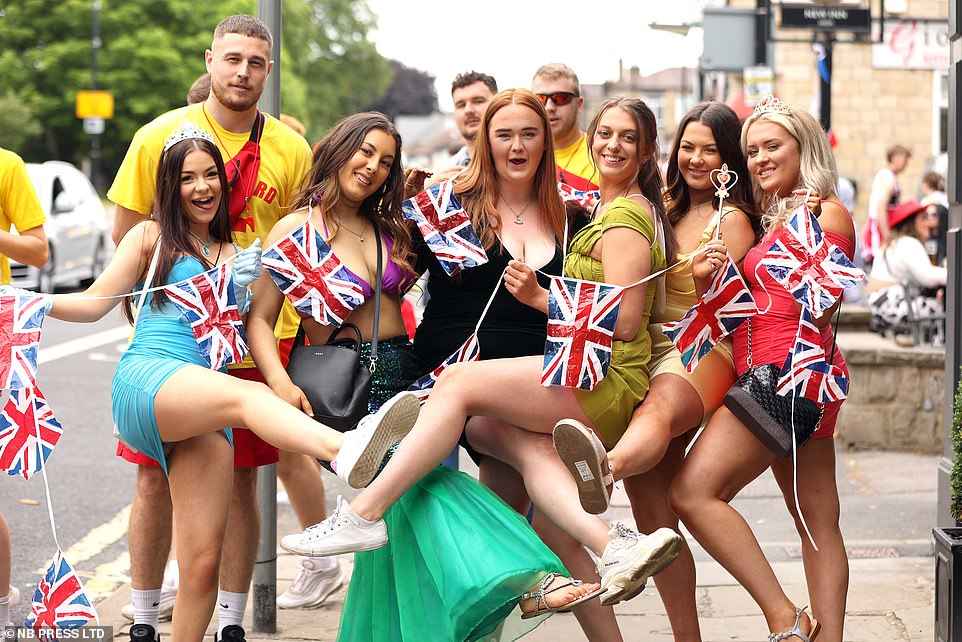 Bunting at the ready: Drinkers in Leeds took their own bunting with them as they enjoyed the extended bank holiday today 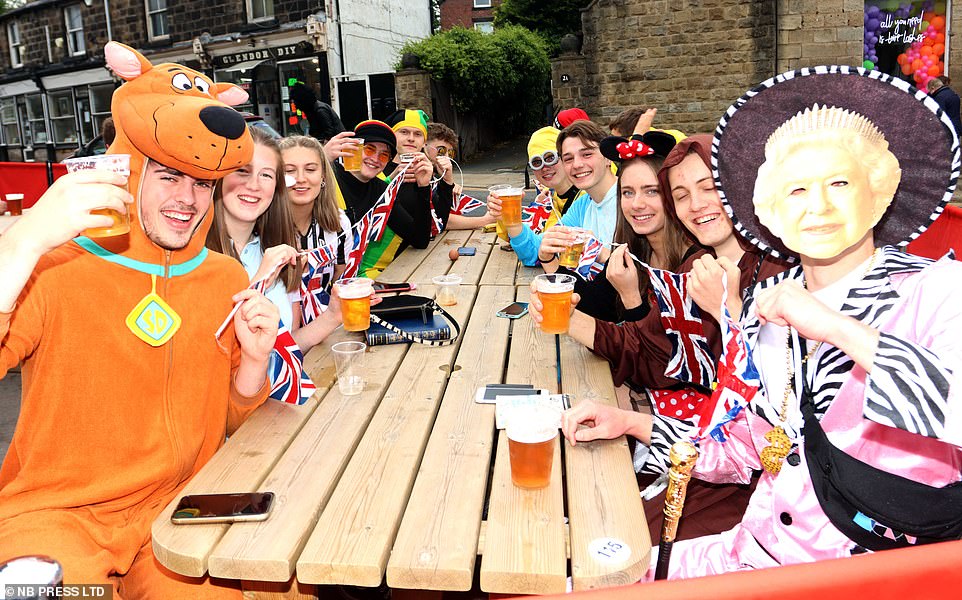 Cheers: Fancy dress in Leeds on Saturday had a distinct royal flavour on Saturday as drinkers marked the Platinum jubilee 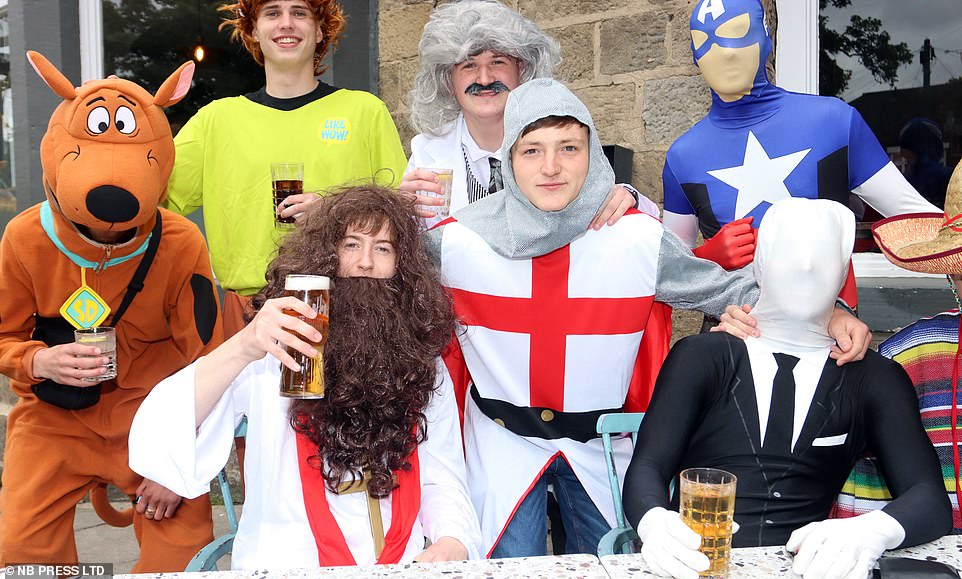 Here’s to the Queen: Revellers in Leeds showed their patriotism by donning English-themed fancy dress this afternoon

Meanwhile, in Dorset, conditions are a little less favourable with neighbours battling blustery conditions but still pushing ahead with their plans to celebrate the jubilee with street parties today.

In Kent, Conservative MP Rehman Chishti shared pictures of a street party being held in Twydall. The Conservative MP said: ‘A real pleasure to meet local residents in Hawthorne Avenue (Twydall) setting up for their HM #Jubilee Street Party. Have a fantastic day. Despite the cold windy conditions terrific to see amazing community spirit.’

It follows yesterday’s royal celebrations which began with a service of Thanksgiving at St Paul’s Cathedral in central London. At 10.50am, Great Paul, the largest church bell in the country at 16.5tons, pealed to herald service of thanksgiving for the Queen’s long reign.

Her Majesty had been hoping to be able to attend the service but has since had to pull out after experiencing ‘discomfort’ on the first day of celebrations. Buckingham Palace has also announced the the Queen will not be attending the Epsom Derby today.