The nephew of Big Gypsy Wedding’s star Paddy Doherty was buried in a blue casket engraved with a £100,000 jewel-encrusted crown.

Mikey Connors, 32, died after hitting a car while driving a horse and cart on the A2016 Eastern Way, in Thamesmead, on July 28.

A life-sized jockey, horse and cart made out of flowers were the centrepiece to his funeral earlier this week, with the £100,000 jewel encrusted crown engraved on his coffin paying tribute to the ‘king of the road.’ 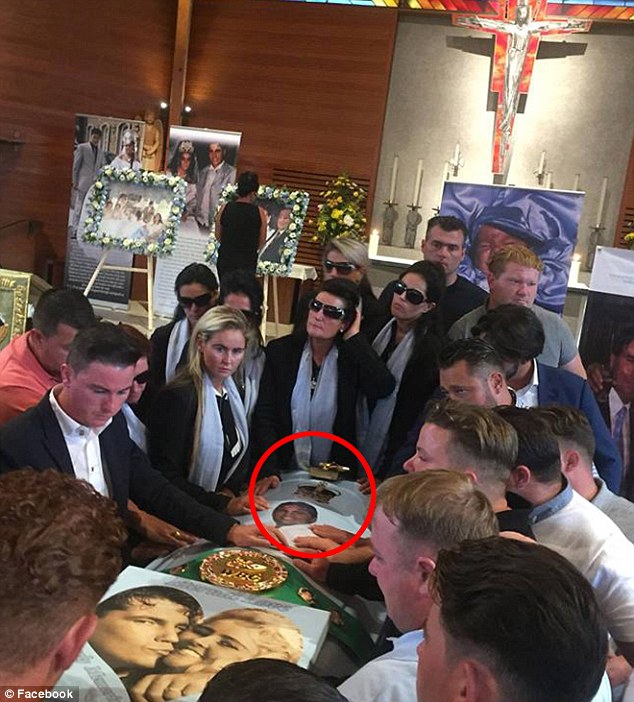 Mikey Connors blue casket is engraved with a £100,000 jewel encrusted crown and also has a picture of him and the WBC boxing belt 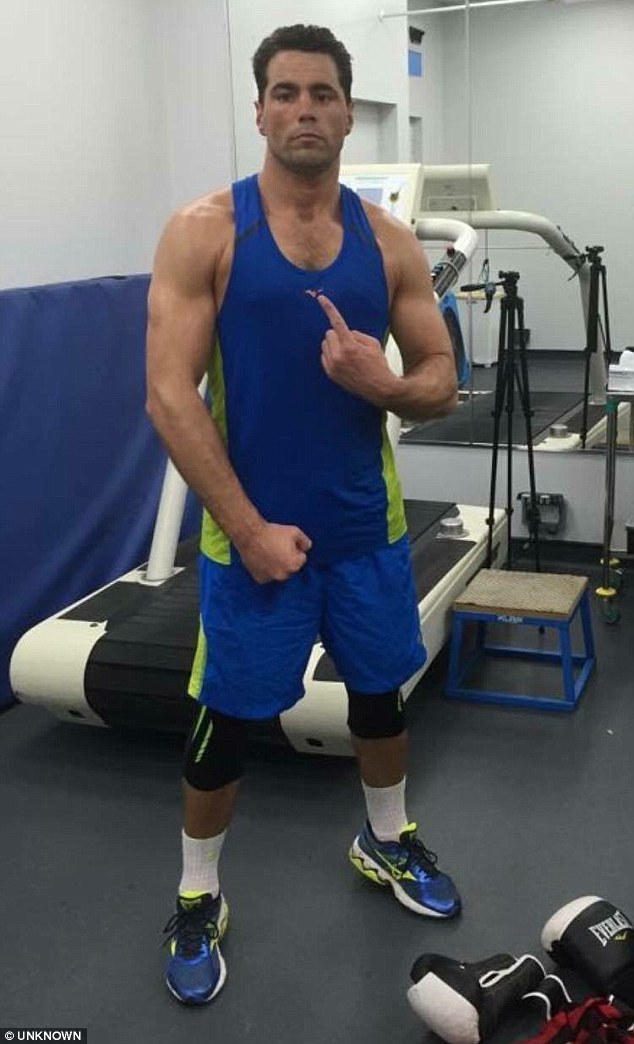 Mikey Connors (pictured), 32, died after hitting a car while driving a horse and cart on the A2016 Eastern Way, in Thamesmead, on July 28. 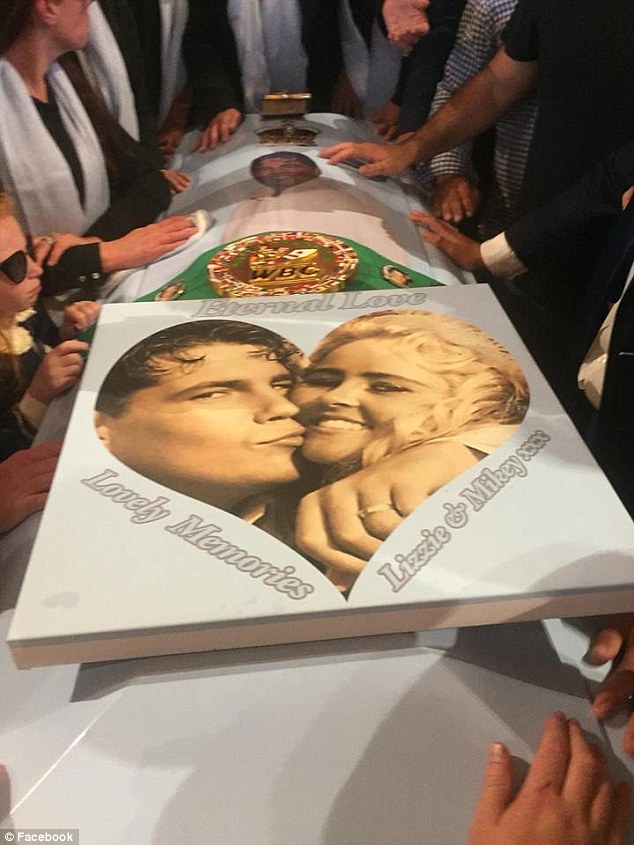 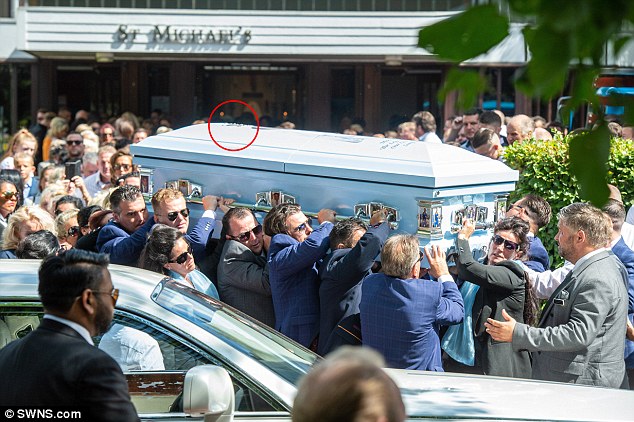 Coffin of Mikey Connors. Mikey was killed in a accident whilst out on his horse and cart Thamesmead. Epsom, Surrey 21st August

A source at the funeral told The Sun: ‘It may seem a bit excessive, but this is our way of showing Mikey how much he meant to us.

‘He liked the finer things in life, so we made sure we got some of the best jewels money can buy to put on his coffin.

‘He was the king of the road and know he’ll wear the crown forever. It’s a proper tribute.’

This week Mr Connors friends and relatives arrived at his funeral in a huge fleet of 16 white Rolls-Royce Phantom cars.

His funeral was held at St Michael’s Church in Ashtead, Surrey and then a ceremony at nearby Epsom Cemetery. 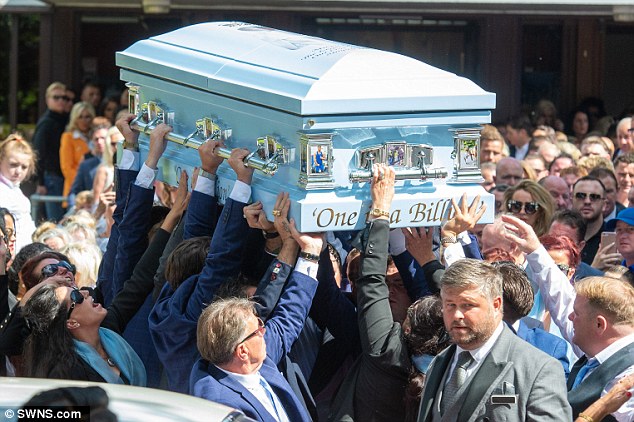 Family members, including Paddy Doherty, mourn as the coffin of his nephew Mikey Connors is carried from St Michaels Church in Ashstead 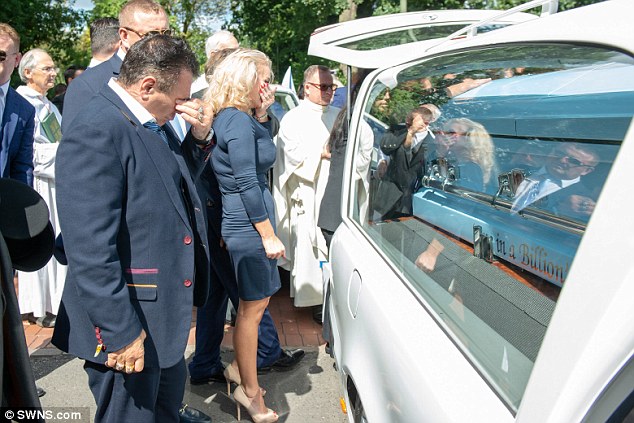 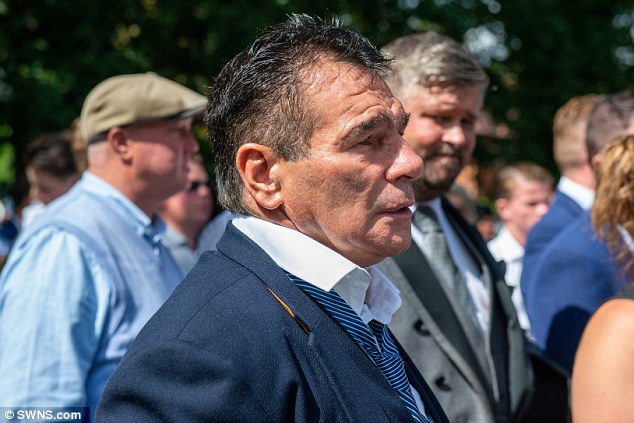 Paddy Doherty in tears at the funeral of his nephew Mikey Connors who died after hitting a car while driving a horse and cart on the A2016 Eastern Way, in Thamesmead, on July 28 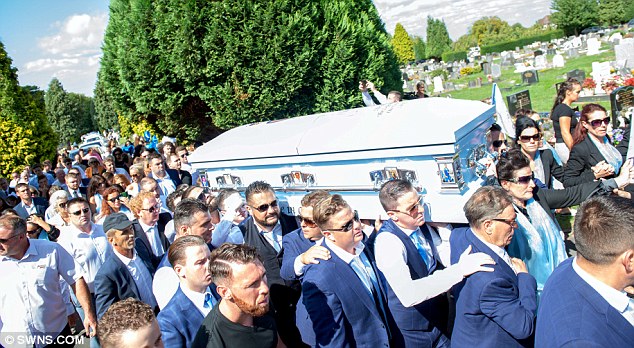 Friends and family follow the coffin of Mikey Connors. The baby blue coffin was also adorned with a WBC boxing belt 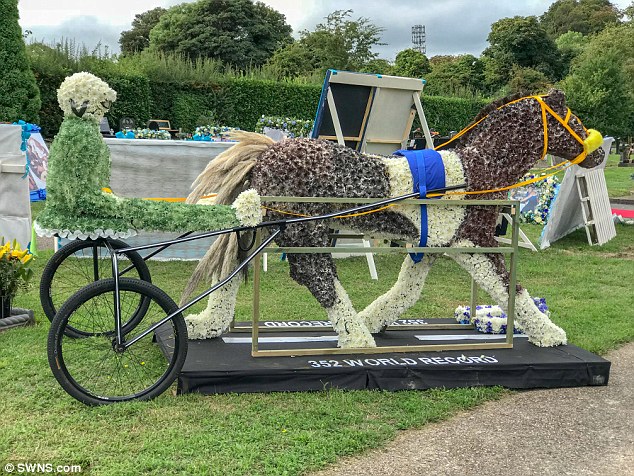 A view of the grave site of late traveller Mr Connors, with the horse and cart made from flowers, ahead of his funeral at Epsom Cemetery in Surrey 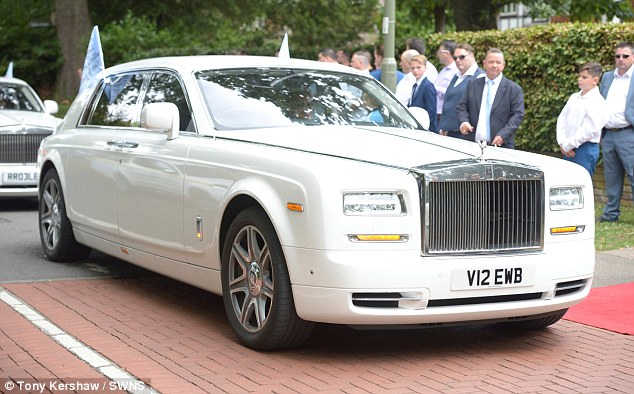 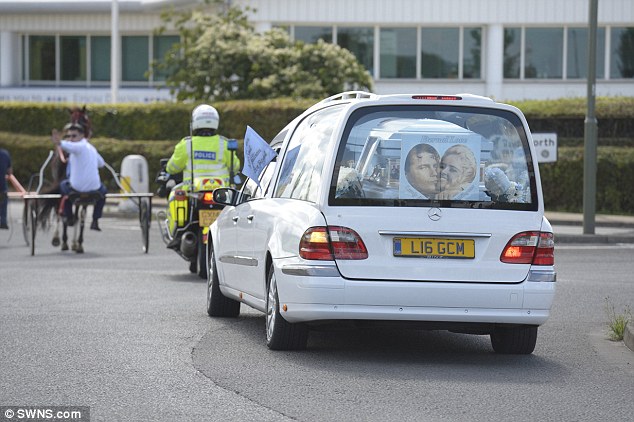 The hearse carries the blue coffin of Mikey Connors at his funeral earlier in the week in Ashstead, Surrey 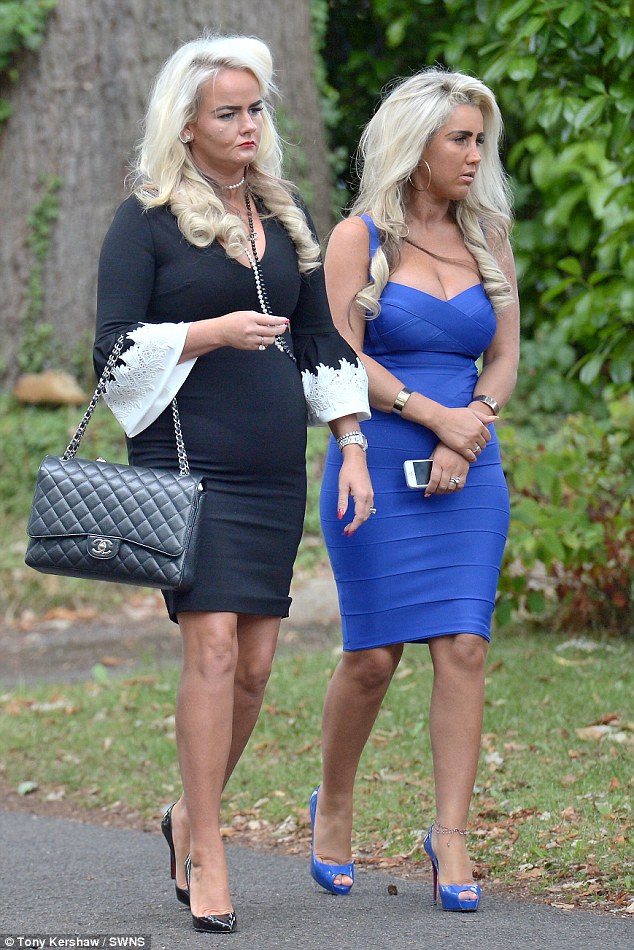 Mourners arriving for the funeral of Mikey Connors in Epsom, Surrey. He was killed in a horse and car accident

Mr Doherty was one of ten pall-bearers who carried the coffin of his nephew after the service.

The coffin was held on the shoulders of ten smartly dressed men as a young girl and boy led the procession.

They held a ‘WBC’ boxing belt and a framed photo of Mr Connors kissing a small child.

Family members banged on the side of the baby-blue coffin and shouted after ‘Mikey’ and ‘God bless ya’.

A woman followed the coffin with a speaker, which played ‘A Place in the Sun’ by Stevie Wonder, followed by ‘Shotgun’ by George Ezra.

Some of the crowd sang along, while other pumped the air with their hands.

The coffin was placed inside a white Mercedes hearse as mourners tearfully bid Mr Connors farewell.

Mr Doherty leant inside the car and placed his hand on the coffin. He was clearly upset as he steadied himself against the car. 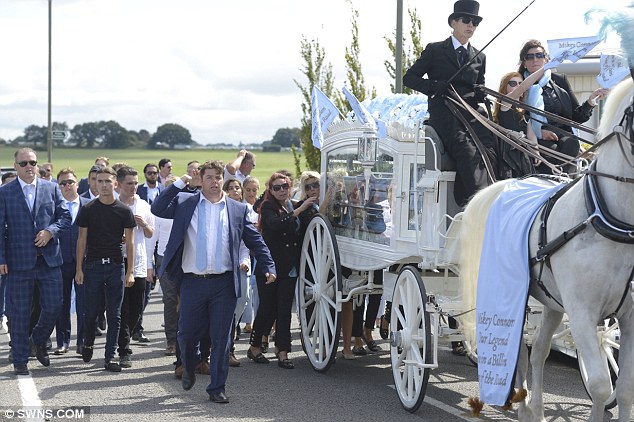 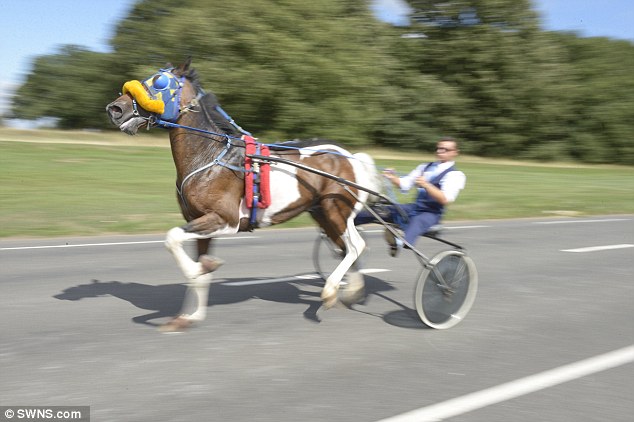 Horses and carts followed the coffin of Mikey Connors. He died after hitting a car while driving a horse and cart on the A2016 Eastern Way, in Thamesmead, on July 28 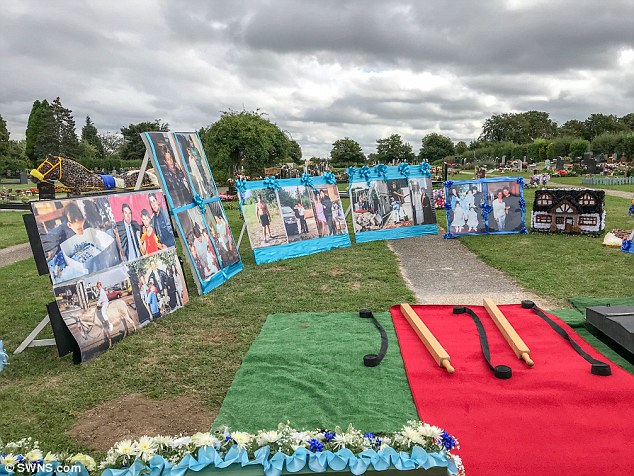 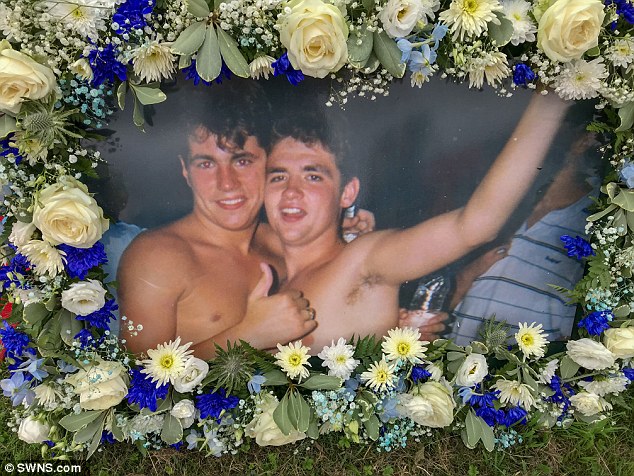 A tribute picture at Mr Connors’ grave site before his funeral, following his death nearly a month ago in Thamesmead 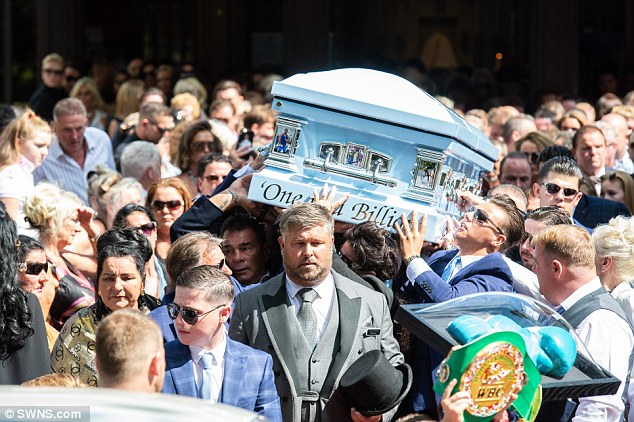 Friends and relatives carrying the blue coffin of Mikey Connor, 32. The inscription on the end of the coffin says ‘One in a million’

Later, Mr Connors was taken for one last race as his coffin in the back of a hearse joined a horse and cart race outside Epsom racecourse.

Mr Connors’s horse, Big T, suffered extensive injuries in the accident and was put down by a vet.

His brother Simey rushed to the scene of the accident after his brother failed to reach the finishing line following the race.

Speaking about his death at the time, Simey said on Facebook : ‘My heart is in bits over you … I saw you lying on the ground I ran over and got on my knees to beg Jesus and Mary for you to be OK.’

After the service, mourners headed to a Wetherspoon’s pub in Leatherhead, Surrey – where scuffles broke out as the evening progressed.

Witnesses described lines of policemen watching over black-clad mourners as they pushed and shoved each other in the road.