Hawaii: New, fast-moving lava is pouring from the flank of Hawaii's Kilauea volcano, destroying four more homes on the Big Island and threatening to isolate around 2000 residents  after a second explosive eruption shot an ash plume three kilometres high from the crater.

Molten rock from two huge cracks formed a single channel and travelled twice the speed of previous flows of older lava that have torn through homes, roads and tropical forest for over two weeks, the County of Hawaii's Civil Defense Agency said.

On Friday, lava changed dramatically with one fissure ramping up and sending a flow across a road, destroying four more homes and isolating residents. The fast-moving lava crossed a road and isolated about 40 homes in a rural subdivision below Hawaii's Kilauea volcano, forcing at least four people to be air-lifted to safety.

The new lava, which is flowing east underground from the sinking lava lake at Kilauea's summit, is expected to create more voluminous flows that travel further, threatening homes and a coastal road that is a key exit route for around 2000 residents. 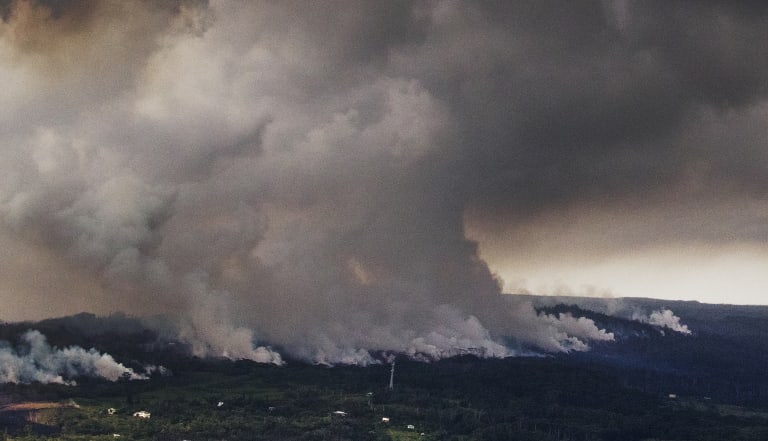 A plume of volcanic steam rises from the alignment of fissures in Hawaii’s Kilauea East Rift zone.

"I think I'm lucky because we went there this morning and we got all the batteries out, and all the solar panels out, about $4000 worth of equipment," he said. "They have to evacuate the people that are trapped up there right now in the same place that we were taking pictures this morning."

He said no one was on his property, but his neighbour had someone on his land.

"I know that the farm right next to my farm . he's got somebody there taking care of the premises, I know he's trapped," Montoya said.

Montoya said the fissure that poured lava across the road opened and grew quickly.

Experts are uncertain about when the volcano will calm down.

The Big Island volcano released a small explosion at its summit just before midnight on Saturday, sending an ash cloud 3048 metres into the sky. The US Geological Survey's Hawaiian Volcano Observatory said eruptions that create even minor amounts of ashfall could occur at any time.

Scientists said the eruption was the most powerful in recent days, though it probably lasted only a few minutes.

It came two weeks after the volcano began sending lava flows into neighbourhoods 40 kilometres to the east of the summit.

A new lava vent – the 22nd such fissure – was reported on Friday by county civil defense officials.

Meanwhile, more explosive eruptions from the summit are possible.

"We have no way of knowing whether this is really the beginning or toward the end of this eruption," said Tom Shea, a volcanologist at the University of Hawaii. "We're kind of all right now in this world of uncertainty."

It's nearly impossible to determine when a volcano will stop erupting, "because the processes driving that fall below the surface and we can't see them." said volcanologist Janine Krippner of Concord University in West Virginia.

The greatest ongoing hazard stems from the lava flows and the hot, toxic gases spewing from open fissure vents close to homes and critical infrastructure, said Charles Mandeville of the US Geological Survey's volcano hazards program.