Police also uncovered a homemade gas mask in the 32nd floor suite of the Mandalay Bay hotel from where killer Stephen Paddock unleashed the massacre. 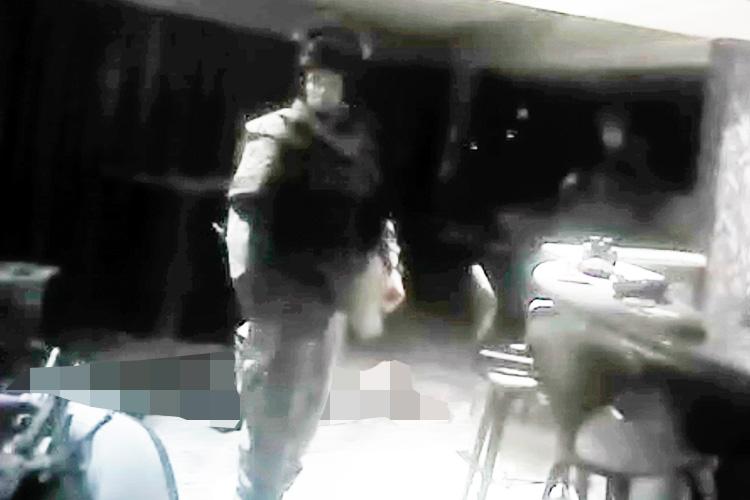 An officer is heard yelling, "Breach! Breach! Breach!", as they approach the room from a stairwell, moments before a loud bang and fire alarm echo through the hallway.

Two hours of footage has been released by Las Vegas authorities seven months after the October 1 massacre in response to a lawsuit by news organisations.

One shows an officer retrieving an assault-style rifle from the ledge of the broken window behind the curtains.

This was one of the guns Paddock amassed in the suite over several weeks, before shooting indiscriminately into a crowd of concertgoers below. 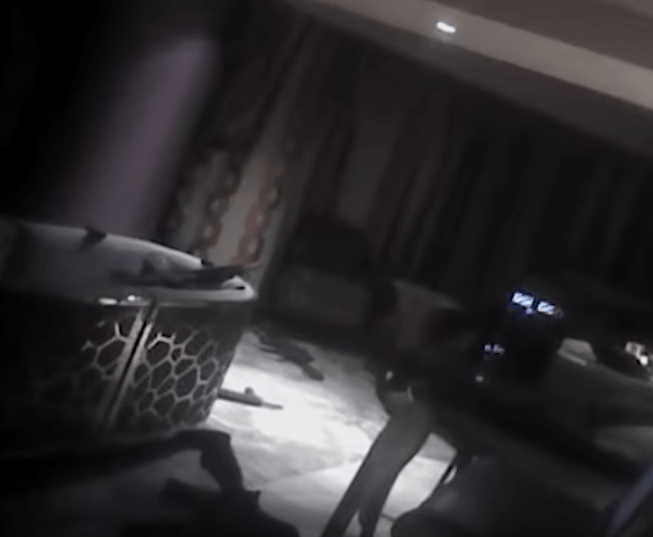 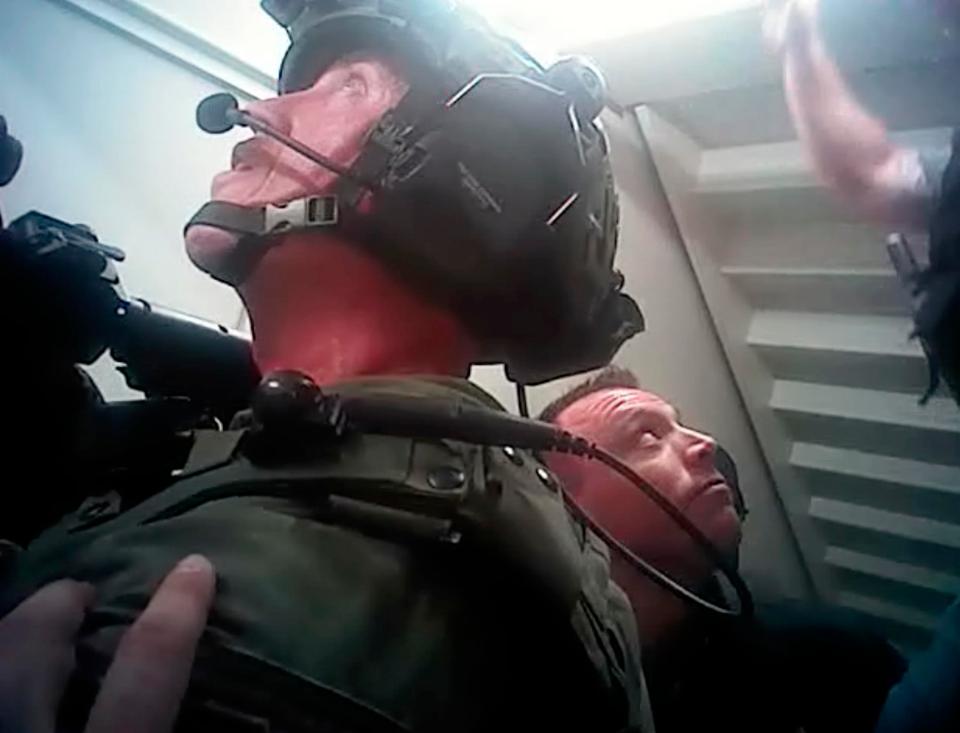 The gunman's limp body is on its back in dark pants, long-sleeve shirt and a glove on his left hand.

A pool of blood stains the carpet near his head as the police SWAT officer walks past.

Some officers are heard talking about the amount of firepower Paddock had, pointing to 10 high-powered guns scattered around the room.

Others talked about Paddock "blasting out the window" and pointed to "a whole suitcase full of loaded AK mags". 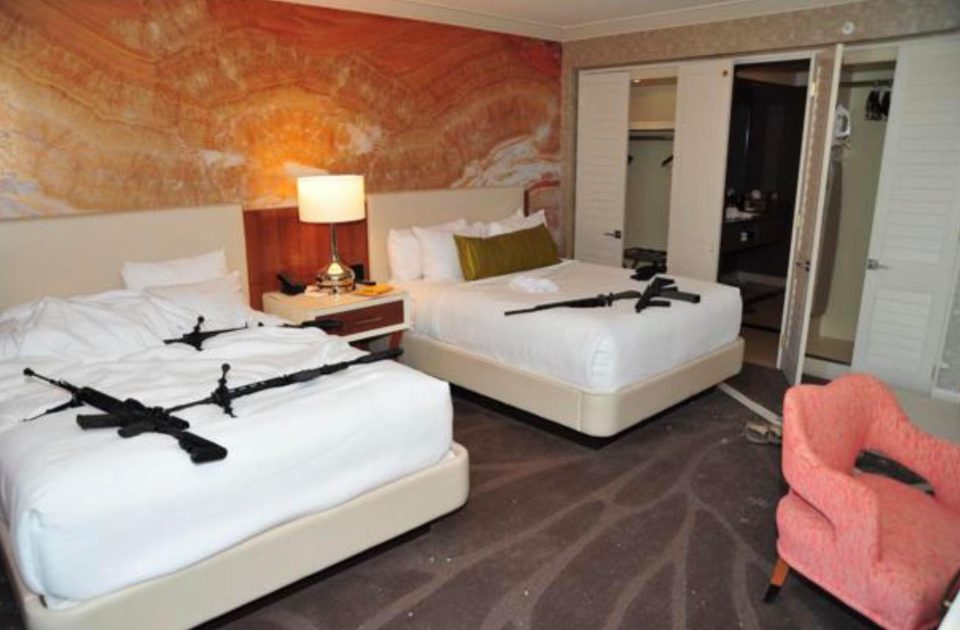 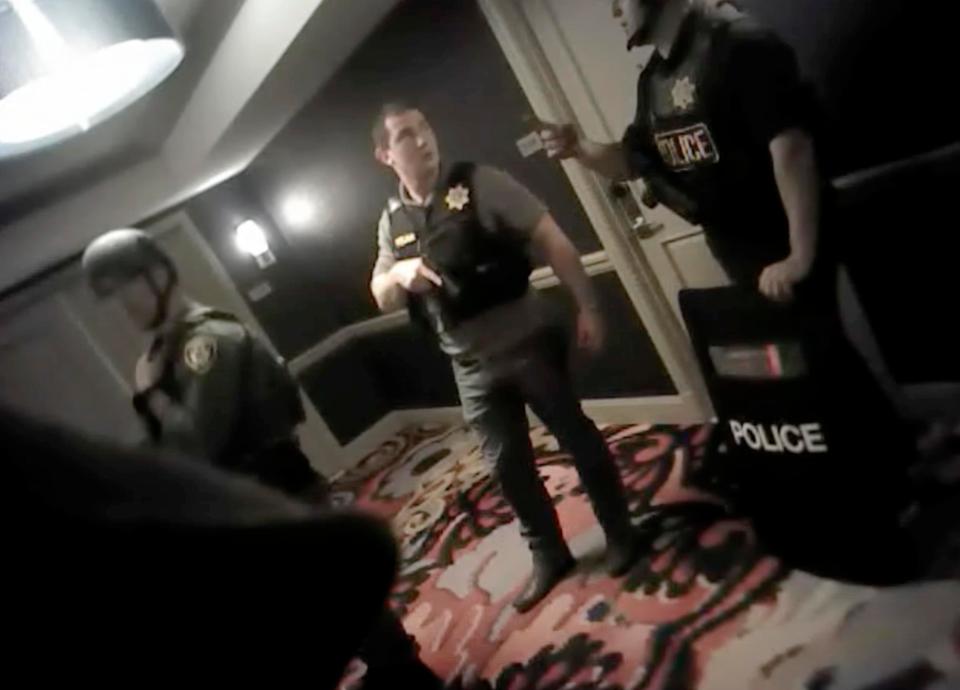 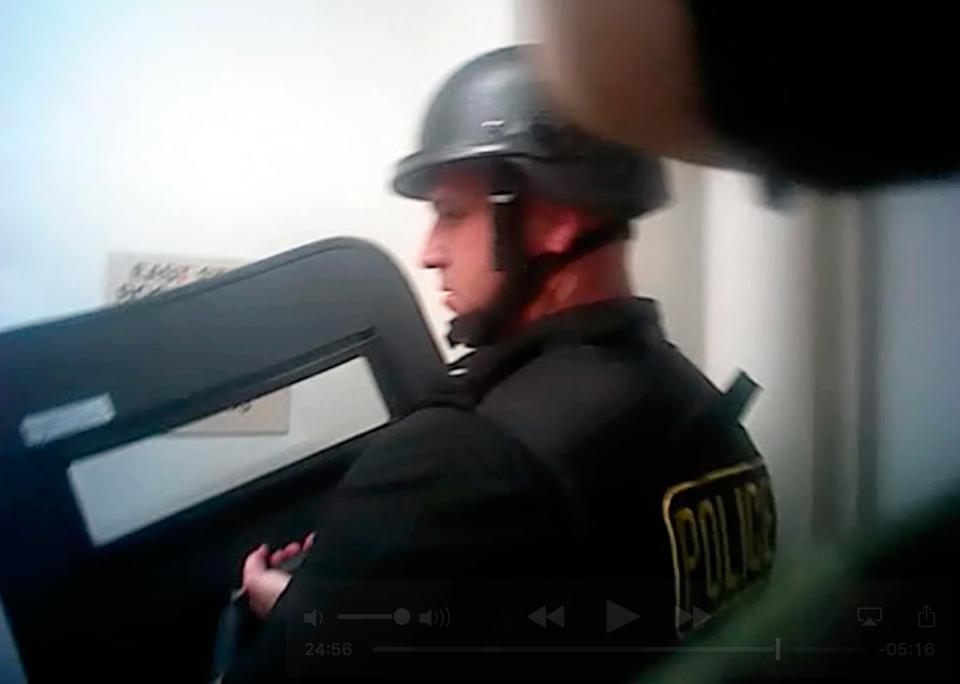 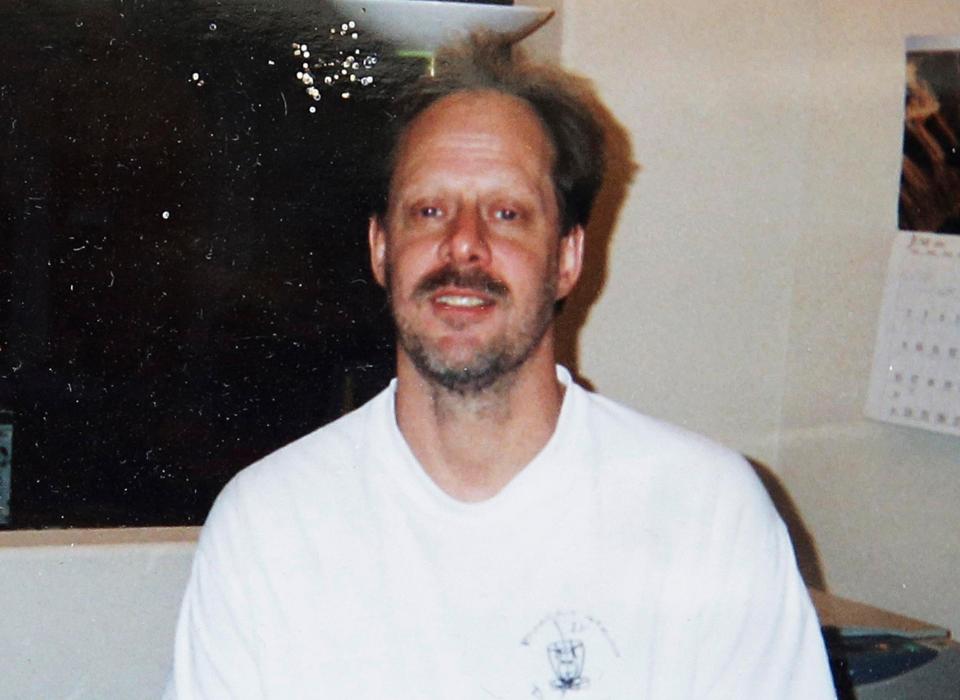 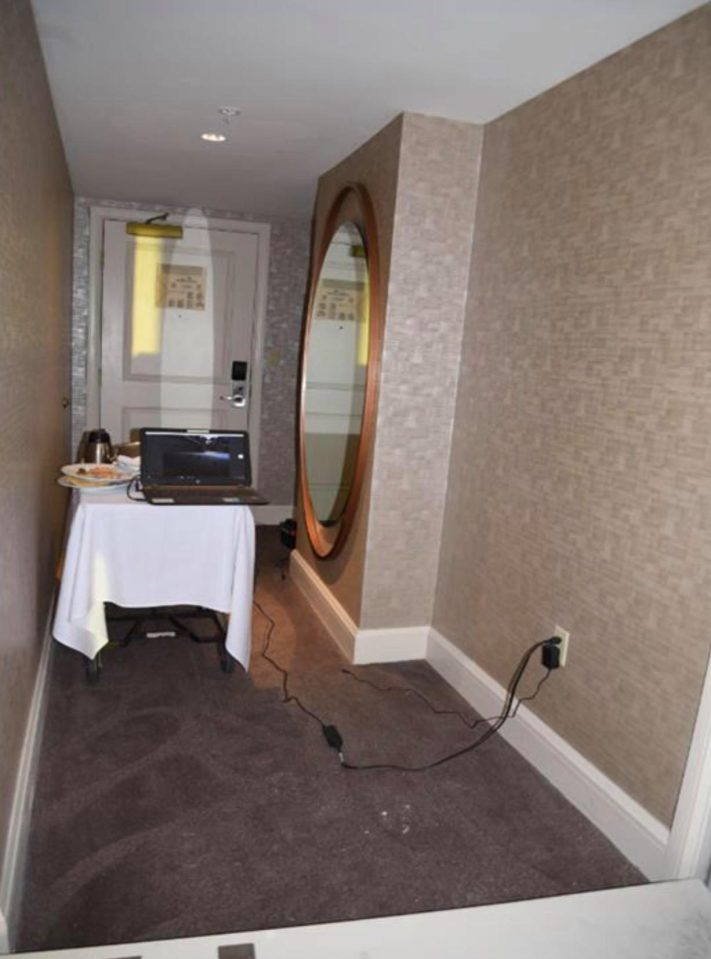 Investigators believe the 64-year-old acted alone, then shot himself before officers burst through the door of his hotel room.

The footage released on Wednesday is just a glimpse of hundreds of hours of body-camera recordings from the raid.

It does not provide a complete view of everything police discovered when they entered Paddock's suite, according to the Associated Press.

The video does not show what the first officer through the door saw because he did not activate his body camera. 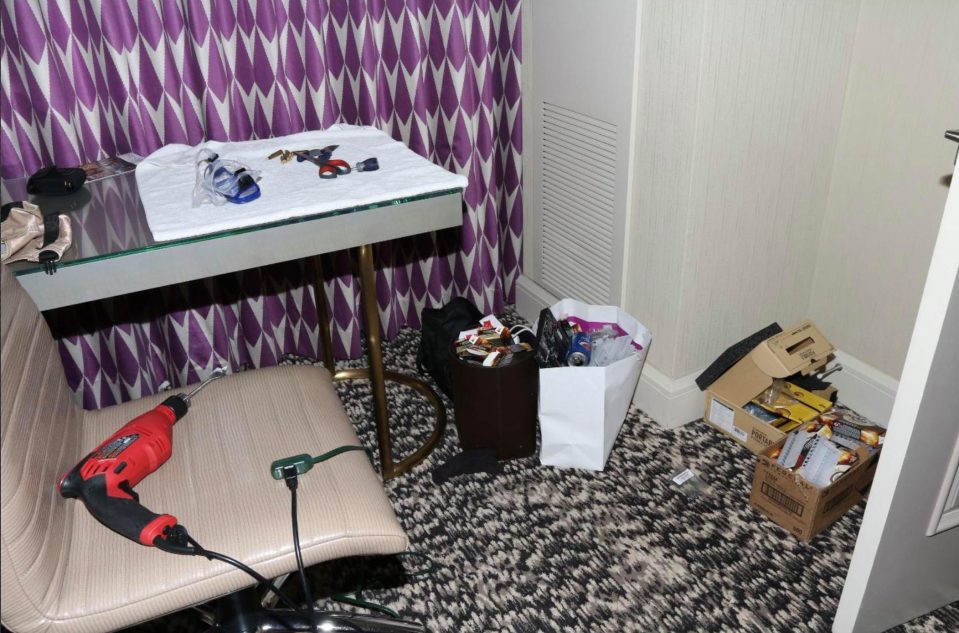 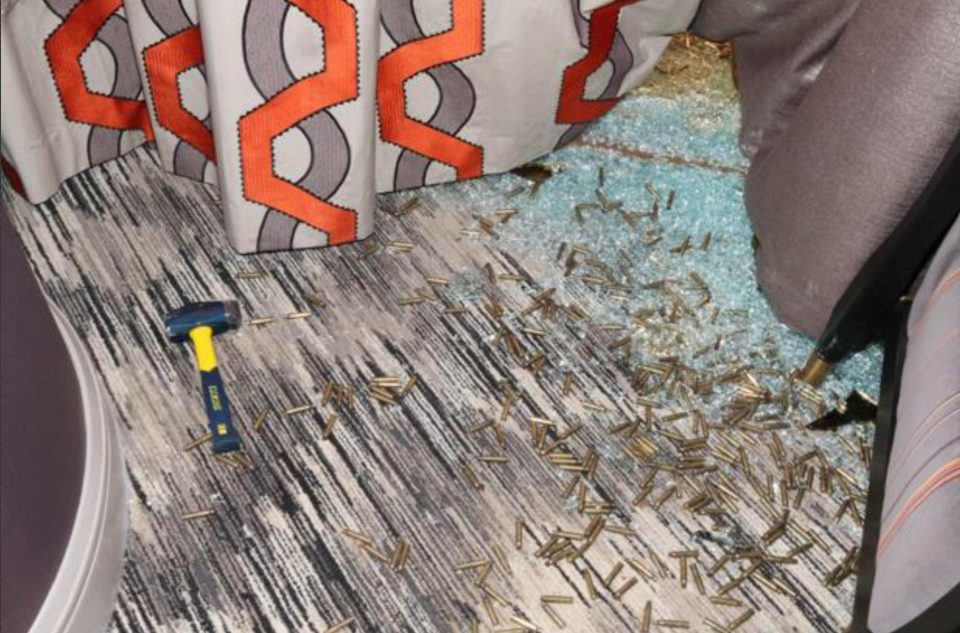 The revelation that the officer failed to activate his camera raised questions about whether officers followed department policy.

The department requires officers with body cameras to activate them during calls that lead to interaction with residents and searches.

Police refused to say whether the officer would be disciplined for violating department policy.

The AP and other media outlets sued to obtain videos, 911 recordings, evidence logs and interview reports to shed light on the response by public agencies, emergency workers and hotel officials while Paddock fired for more than 10 minutes.