EXCLUSIVE: ‘I can still hear Lady’s puppies squealing as my mom boiled them to death.’ Daughter of parents-of-15 reveals hell inside their ‘house of horrors’ – and her relief at escaping

The 18-year-old daughter of parents of 15 who are accused of running a house of horrors has broken her silence to DailyMailTV to tell how her mom marked her 17th birthday by boiling puppies alive.

Lizzy Crouch told of a childhood of cruelty and abuse by a mother who told her she was not her real mom and a father who told his children they were too stupid to go to school.

Martha and Timothy Crouch , 53 and 57, are awaiting trial accused of child abuse, cruelty to animals and obstructing an investigation after some of their 15 children told law enforcement about the ‘house of horrors’ in Aztec, New Mexico.

Both Martha and Timothy – a former reserve sheriff’s deputy – deny the charges. They have seven daughter and eight sons, who range in age from 10 to 33

But Lizzy Crouch, the fourth-youngest of the 15, told DailyMailTV how life inside the squalid ranch house was loveless and routinely cruel.

‘I’ll never be able to get the images out of my mind – seeing my mother dropping newborn puppies into boiling water and the smell of them cooking on the stove top,’ she told DailyMailTV. 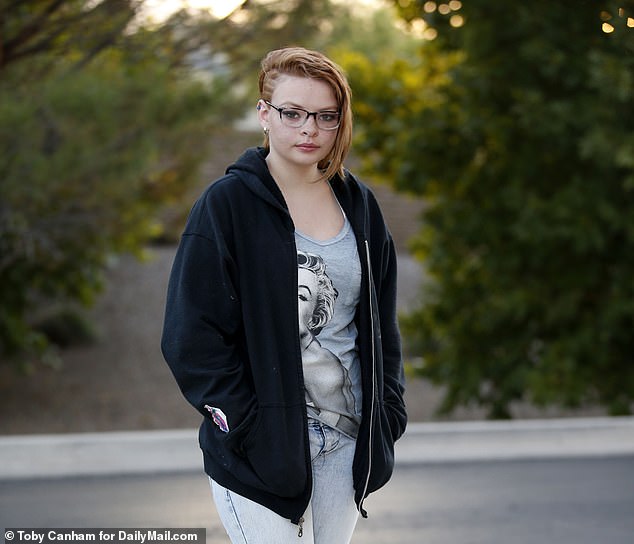 Speaking out: Lizzy Crouch is the fourth youngest of Martha and Tim Couch’s 15 children and now tells DailyMailTV of growing up in a loveless home where cruelty was routine 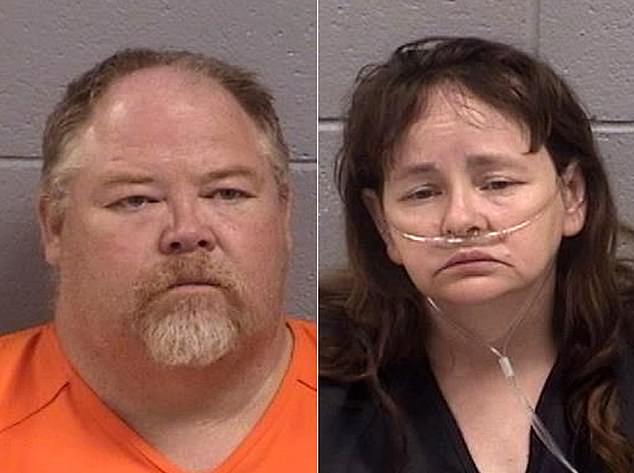 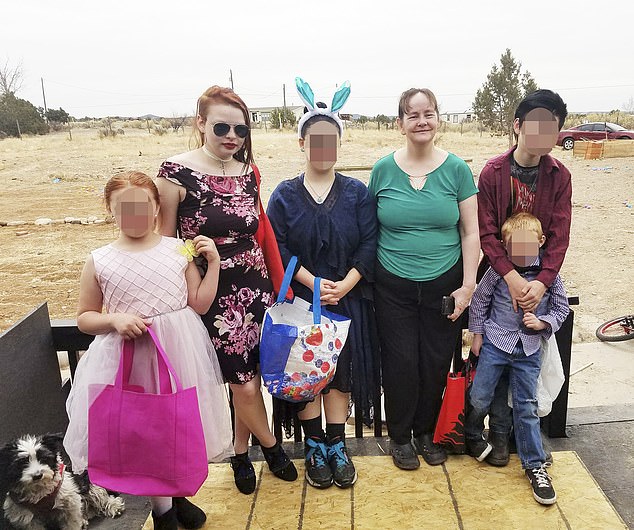 Lizzy Crouch (second from left) stands her mother Martha, her three younger siblings and one of her older sibling’s children during an Easter Egg Hunt at her home in Aztec, New Mexico in April 2019. Months later she escaped and told authorities her parents had abused her 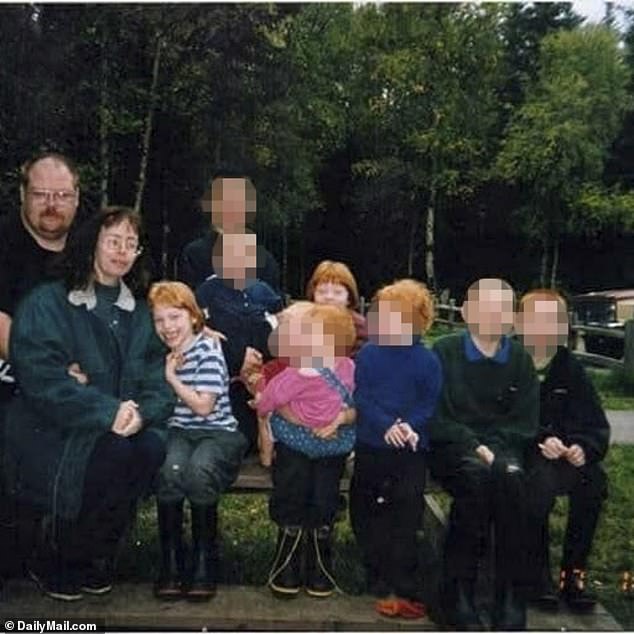 Looking like a happy family, Timothy Crouch and Martha Crouch pose with their children when they lived in Big Lake, Alaska in 2001. The children’s faces have been blurred out apart from Alexandria, then 10, who leans into her mom and her sister, Anastaisea, then nine, who is in the center back row. Anastaisea said she was only allowed out on special occasions and would normally be chained to her bed as her mother controlled what she ate 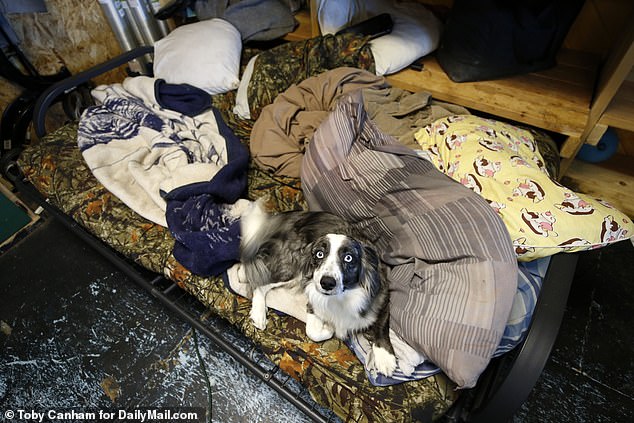 Animal cruelty: Lizzy Crouch says that when one of the family’s dogs had a litter of puppies, her mother marked her 17th birthday by boiling them alive

‘I used to wake up screaming, hearing the puppies in my nightmares, squealing as they boiled to death.

‘The only way I can stop having the dreams is by not sleeping.’

The last time Lizzy – a family nickname for her birth name of Suzannah – saw her mother boil dogs could not have been more horrific: it was her birthday.

‘I was in my bedroom and my mother came in and said, ‘I have a birthday present for you’.

‘I should have known something was up because she is not one to single me out to give me a birthday present.’

Lizzy said she followed her mother down the hallway into the kitchen and started to smell something that she said was ‘atrocious.’

‘I saw some of my brothers and sister lined up in the kitchen and on the stove top I saw a large silver pot, like a pressure cooker.

‘In it I could see baby puppies in the boiling water, at that time I wasn’t sure whether they were all dead or just in the process of dying. I heard whimpering from them.

‘It was awful. I was saddened but, I’m upset to say, not shocked as this wasn’t the first time – I had witnessed my mother killing puppies like this seven times before.

‘The sounds of them dying and crying is something I’ll never forget.

‘After a few minutes, our mother ordered one of my brothers to take the pot out into the back yard and told the rest of us to go back to our bedrooms.

‘I went back and just bawled my eyes out, these puppies were only a week old, their eyes were still closed, they were the size of mice. Each one of them would fit into the palm of my hand.’

Witnessing the death of the puppies made Lizzy determined to escape; she now lives with her two older sisters  Alexandra, 28, and Anastaisea, 27, in Safford, AZ. Their brother James, AGE, is also supporting her.

But in her last year living at home, the cruelty became too much: her mother beat Lizzy routinely with a soup ladle.

‘My mother would pick a sibling and torment them, it just so happens in the past year or so I was on the top of my mother’s list,’ she said.

‘If I disagreed with her, she would hit me with the ladle numerous times on my legs and lower extremities.

‘She made sure it was areas where the marks could be hidden with clothing in case someone from the outside ever saw us.’ 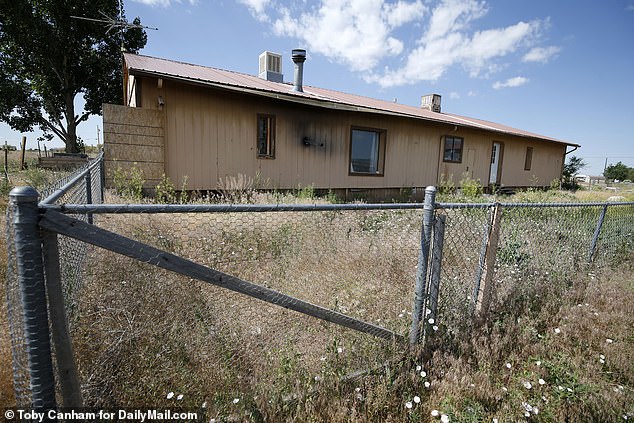 ‘House of Horrors’: The Crouch home in Aztec, New Mexico where mom-of-15 Martha Crouch allegedly terrorized her children by beating them and making them watch as she killed animals 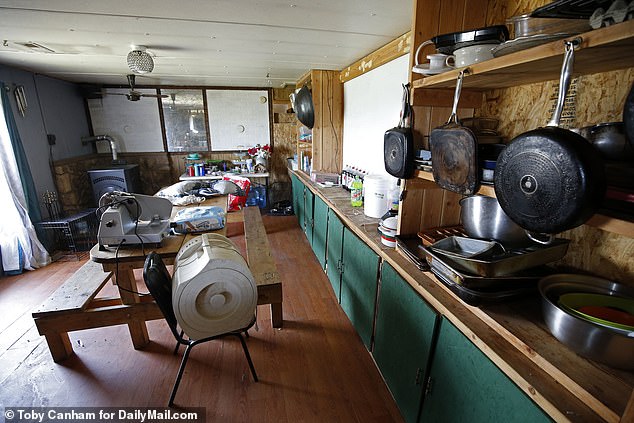 Crime scene? Lizzy Crouch tells DailyMailTV that her mother made her watch in this kitchen as she boiled newborn puppies alive to mark her 17th birthday 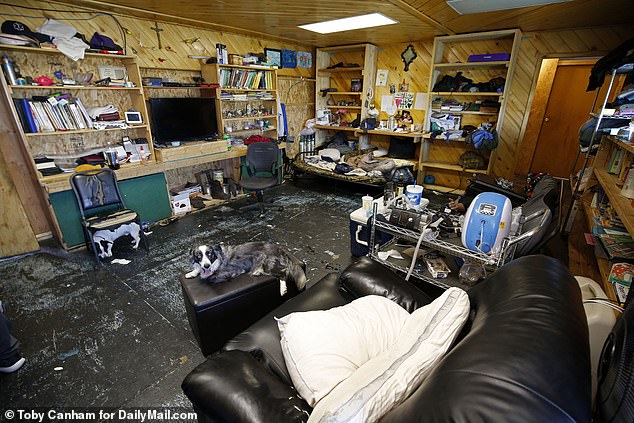 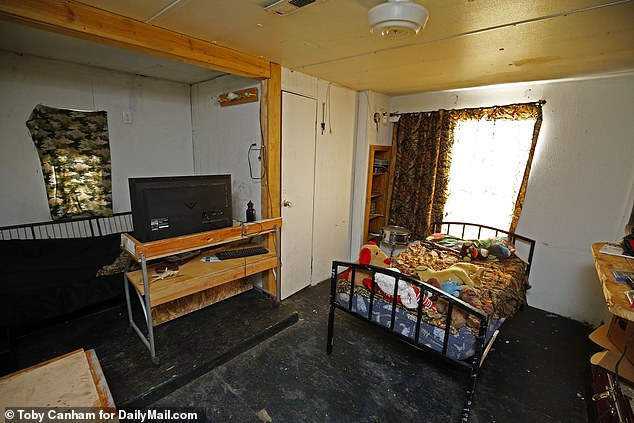 The bedroom in the ‘House of Horrors’ home where Martha and Tim Crouch’s 16-year-old daughter used. She is now in foster care after her parents were arrested

After Lizzy left her parents’ house in June police were able to photograph evidence of bruising on Lizzy’s body, according to Martha Crouch’s arrest affidavit.

Tears welling in her eyes, Lizzy said, ‘They should have never had one kid, let alone 15. I don’t think they ever loved any of my siblings. I’ve never felt they loved me growing up.’

Lizzy remembers when she was just four, she asked her mother if she loved her.

‘My mother looked me in the eyes and said she didn’t love me and said she wasn’t my mother, even though she is listed on my birth certificate as my mom,’ she recounted.

Her sisters with whom she is now living have previously told of their own ordeals as they grew up, and the family moved between Missouri, Alaska, Kansas and Montana, then finally New Mexico.

Alexandria told DailyMail.com how when she became pregnant as a 14-year-old, Martha beat her so viciously she miscarried, while her sister Anastaisea was chained up to her bed for three years starting when she was eight to make her lose weight.

Anastaisea also said she saw her mother kill six newborn kittens by beating them to death with a hammer.

The 11 adult Crouch children are however, not united in their version of their childhoods.

Brother Timothy Joseph ‘TJ’ Crouch, 32 and Samuel Crouch, 22, have previously told DailyMail.com that their parents were kind and loving.

And their father also vehemently denied the claims his children were ever chained up as prisoners.

Timothy said: ‘I’ve never heard anything so ridiculous in my life. A ‘fat chain’? We never chained up any of our children.

‘The daughter who made that false allegation was a bit chubby and we wouldn’t allow her to eat desserts. It was for her own good, but we never chained her up to anything.’

Anastaisea previously told DailyMail.com a version of her childhood which paralleled Lizzy’s.

‘I was a chunky kid and if I weighed more than my older siblings she’d get mad at me and hit me. One day, when I was eight years old, she chained me to my bed with a heavy-duty dog chain so she could control what I ate,’ she said.

‘It was about ten feet long. One end was attached to a bedpost and the other was wrapped around my ankle and fastened with a key code padlock. 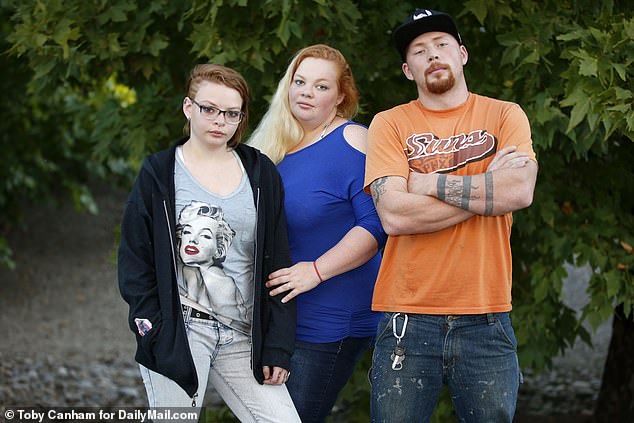 Family: Lizzy Crouch, her sister Anastaisea and borther James are now supporting each other in Arizona. Lizzy tells DailyMailTV she will give evidence against their father 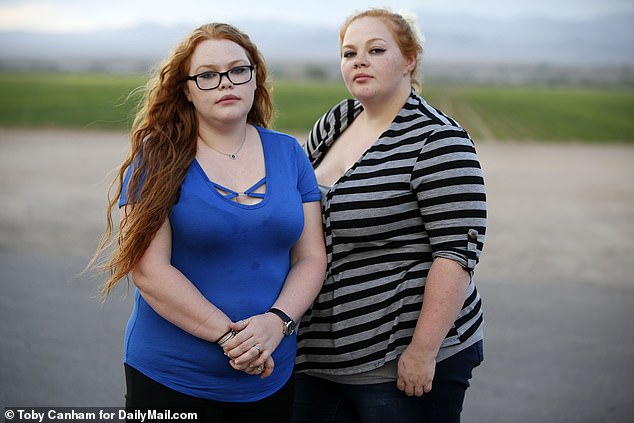 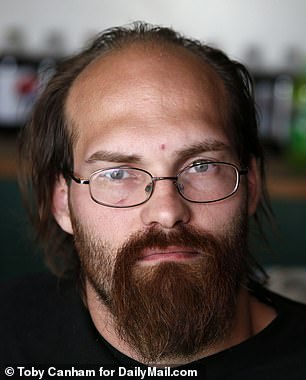 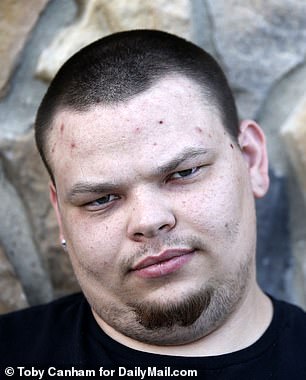 Timothy Joseph ‘TJ’ Crouch, 32, (left) and Samuel Crouch, 22, (right) are supporting their parents Timothy and Martha. TJ was charged on May 31 on three charges of aggravated assault with a deadly weapon at the Crouch family home. It was this arrest that launched the child welfare probe into the Crouch family and led to their 17-year-old sister making allegations against their parents 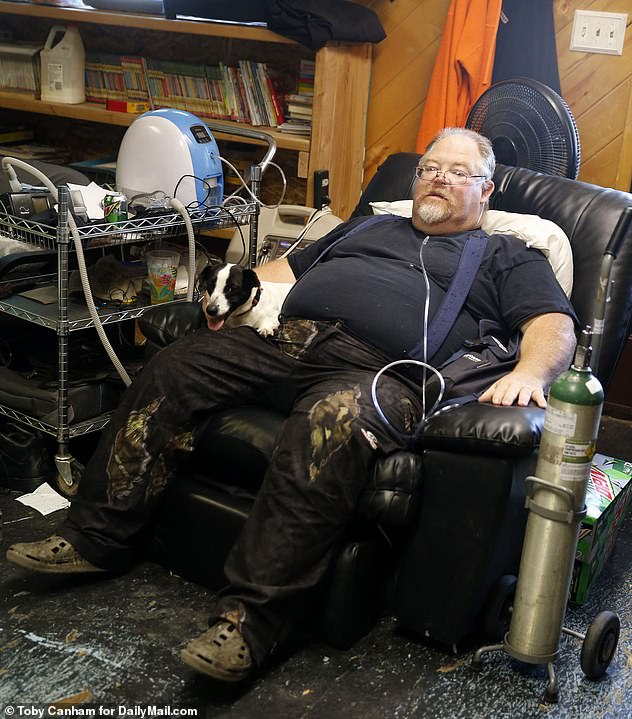 ‘This went on for about three years. On occasion my mother would unchain me to weigh me or if people came over to the house or our family had to go somewhere.

‘One time, when she weighed me, I was one pound more than my older sibling and she beat me. I had to go to the bathroom in a bucket and I could only shower about once a month.’

The cruelty was not only physical. Education wasn’t a top priority for Lizzy’s parents. ‘My parents told us we were too stupid to go to school.’

The last grade Lizzy can remember attending for any measurable length of time was 8th grade, when she was 13.

‘I attended the school for about one month before my parents pulled me out of there and we all moved.

‘I would attend various grades for a few days or weeks at a time. I’ve never completed a grade in my life.’

Lizzy said that she is learning to read and has made vast improvements since she’s been away from her parents.

Most of all she is pleased that her younger siblings are safe, living together in a group home in New Mexico.

She said: ‘They are doing well, considering the circumstances. They are actually going to school and learning, something they weren’t allowed to do under the care of my parents.’

Lizzy is applying to work at local fast food restaurants and is going back to school to earn her high school diploma, with the hope to one day become a child psychologist.

She said, ‘I want to help kids who were in the same situation as I was in.

‘Unfortunately, I don’t think I’m the only kid who has had monster parents like I’ve had.

‘I want to show kids they can survive no matter how bad their childhood was, I’m living for that. ‘

But she now faces giving evidence against her own parents.

Timothy is out of jail, due to stand trial on December 10, but his wife remains in San Juan County Adult Detention Center, unable to pay the $30,000 bail bond.

She will appear at Eleventh Judicial District Court in Aztec for a hearing to discuss her trial on January 22.

Lizzy fears her mother, who needs an oxygen tank and sometimes uses a wheelchair, will try to avoid a trial by claiming she has psychological issues.

Lizzy said, ‘My mother is attempting to convince the court she is incompetent to stand trial. She’s acting, she’s trying to fool the court psychologist.

‘She’s put on an act our entire life, pretending we were one big happy family. She could win an Oscar for her acting job.’

She has not spoken to either parent since their arrests, says she still cares for them but believes they should be given life sentences.

She said: ‘I love them but I never want to speak to them again.

‘They should spend the rest of their lives in prison. Failing that, they should have any parental rights to my younger sisters and brother stripped from them.

‘If I must testify against my parents I will, I just can’t let them torture my three minor siblings like they did the rest of their kids.

‘I’m willing to do whatever it takes to keep my parents away from my younger siblings, forever.

‘I want someone to ask them, ‘If you never loved any of your children, why did you have so many?’