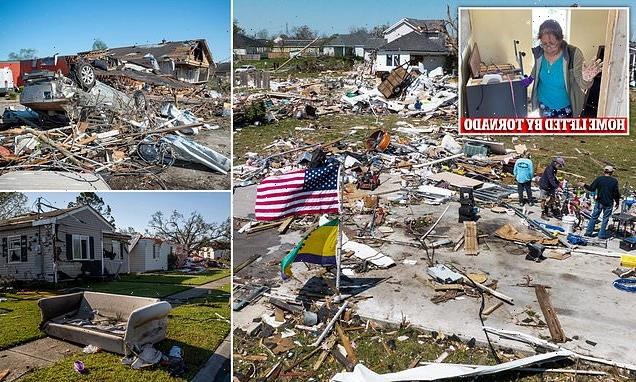 Louisiana family gets ride of their life when house is picked up by tornado and carried into the street: New Orleans declares a state of emergency after tornadoes damage more than 12,000 buildings and kill one man

Louisiana’s governor declared a state of emergency Wednesday after tornadoes lashed the New Orleans area, flipping vehicles, tossing a house with a family inside to the middle of their street, leaving thousands without power and killing at least one person.

A mother in Arabi, in the St. Bernard Parish, described the terrifying moment she felt her house spin a full rotation – and when she emerged, the house was in the street. Standing on top of the wreckage, she frantically screamed for help while her daughter, who was on a breathing machine, was trapped inside.

The powerful storm is the latest to devastate a region still reeling from Hurricane Ida last August and Hurricane Katrina nearly 17 years ago.

At least two people are confirmed dead, including a 25-year-old man in St. Bernard Parish, according to a statement from Louisiana Gov. John Bel Edwards. Just north of Dallas, a woman was confirmed to be among the dead. Authorities didn’t say how they were killed.

Several other people were transported to the hospital and local emergency officials say dozens of homes were damaged in St. Bernard Parish alone. Exact numbers will become available once the initial emergency response is completed.

Other tornadoes spawned by the same system caused so much damage in Texas that the governor declared a disaster in 16 counties. Buildings were shredded in Alabama, where torrential rainfall was recorded.

The multi-day severe weather event is expected to produce more powerful storms as it moves east and is expected to smash into Florida, Georgia and the Carolinas. 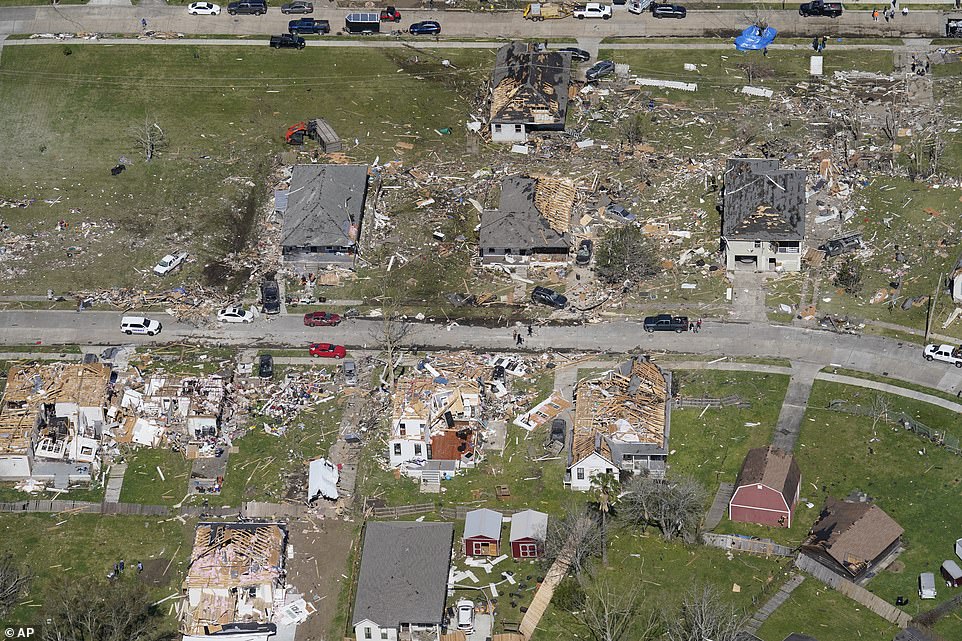 Drone footage shows the community of Arabi, in the St. Bernard Parish, that was devastated by Tuesday’s storms 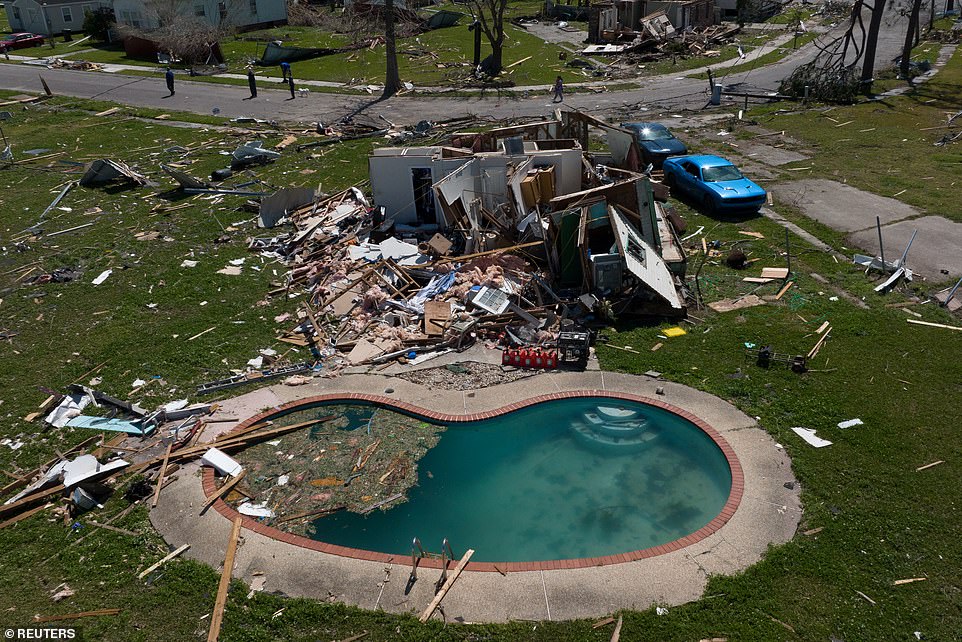 Residents walk past a home destroyed in the aftermath of a tornado in the Arabi neighborhood of New Orleans, Louisiana 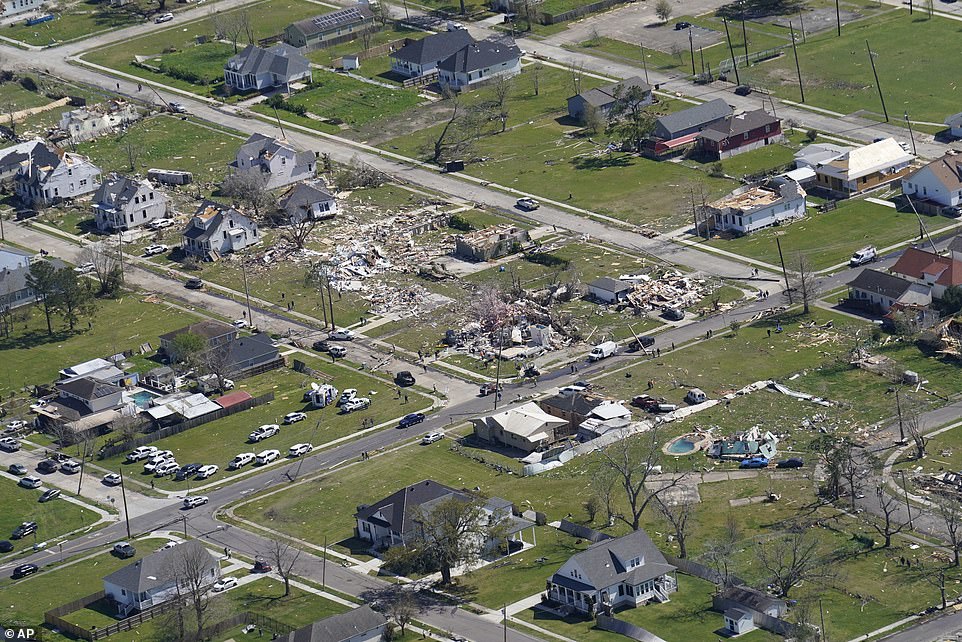 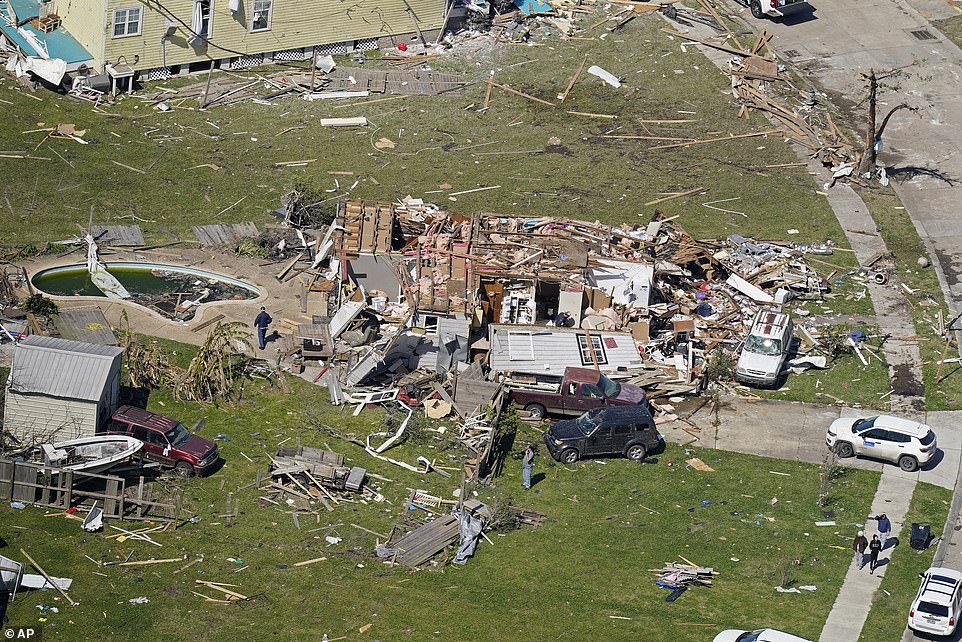 People walk amidst destruction from a tornado that struck Tuesday night in Arabi, La., Wednesday 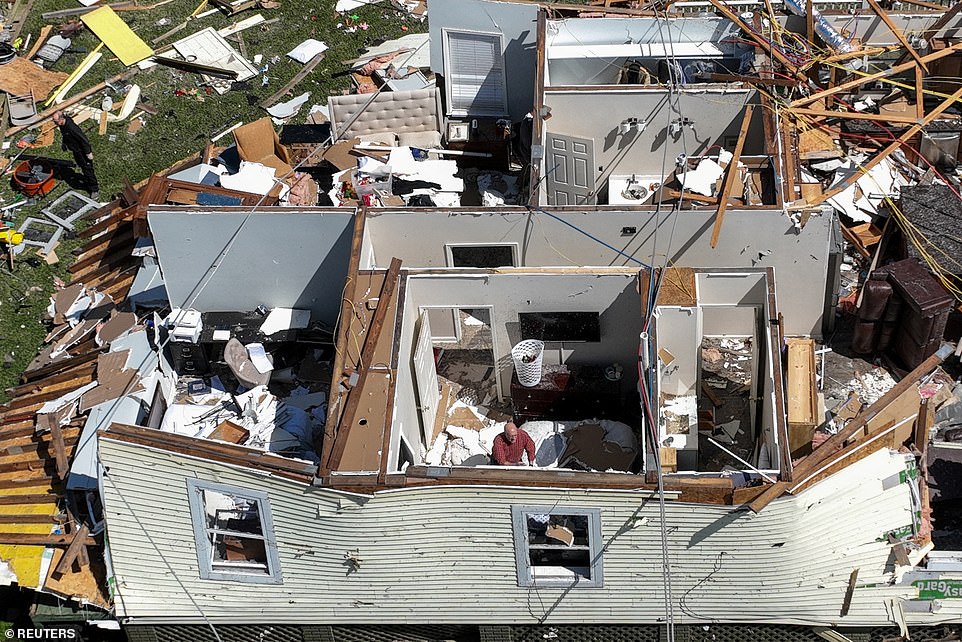 A man clears debris of a destroyed home, after it was struck by a tornado in the Arabi neighborhood of New Orleans

The storm system is the latest blow to a region still reeling from Hurricane Ida last August and Hurricane Katrina nearly 17 years ago. Officials say Arabi, in St. Bernard Parish, was hit hard.

‘Unfortunately, our people have become all too familiar with rebuilding after tragedy and loss, but it is never easy,’ Gov. John Bel Edward said. ‘My prayers are with everyone who is hurting because of these tornadoes today and I have pledged to local leaders that we will be here to support their long-term recovery efforts.’

In Arabi, debris hung from electrical wires and trees amid destroyed houses. Power poles were down, forcing emergency workers to walk slowly through darkened neighborhoods checking for damage early Wednesday.

The tornado that ripped through a New Orleans suburb lifted one house into the air and dropped it onto the middle of a street with a family inside.

Neighbors said the parents of a girl climbed out of the wreckage screaming frantically for help. Their daughter, who was on a breathing machine, was trapped in the house.

On Wednesday, as she tried to salvage items from the one-story house that had been moved 30 feet by the storm, mother Dea Castellanos described to The Associated Press through a translator how she heard rain and wind outside while she was sitting on her living room couch Tuesday.

The next thing she knew, Castellanos said, she could feel the house spin through a full rotation and she ended up in a bedroom.

When the family was finally able to emerge, Castellanos noticed that her house was in the street. Her daughter, who suffers from muscular dystrophy, was stuck in her bedroom, calling for her mother.

‘They were screaming. His wife was hysterical,’ neighbor Chuck Heirsch, who called 911, told The Times-Picayune / New Orleans Advocate when he saw his neighbors trying to get to their daughter. ‘They were already traumatized from taking that `Wizard of Oz´ ride.’ 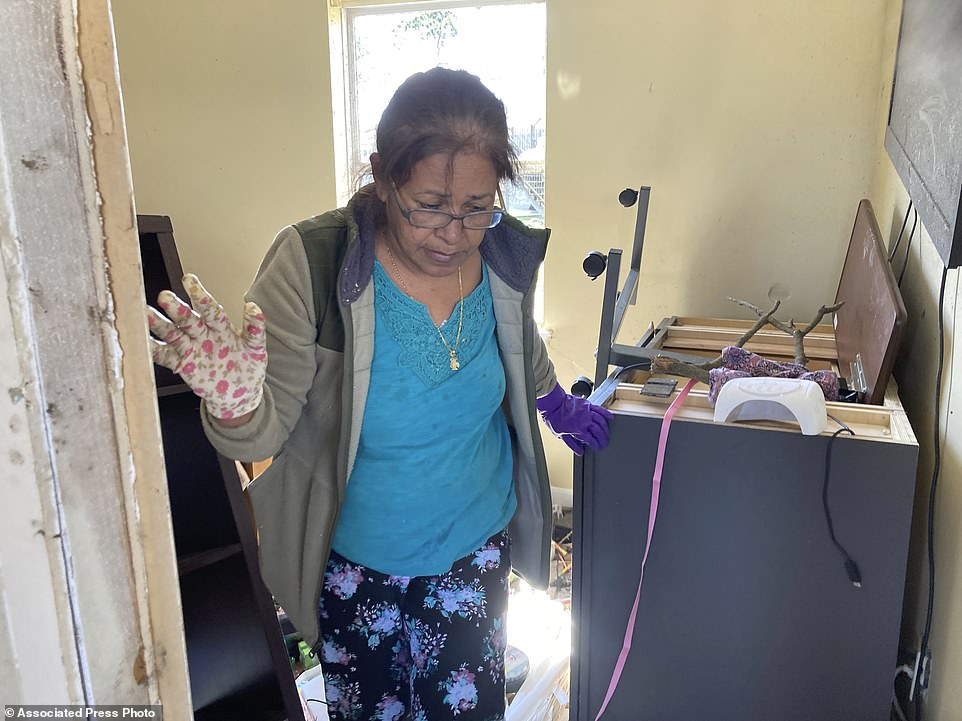 Dea Castellanos walks through her destroyed house in Arabi, La., Wednesday, March 23, 2022. The house was moved off its foundation during the tornado Tuesday night and landed in the street about 30 feet away 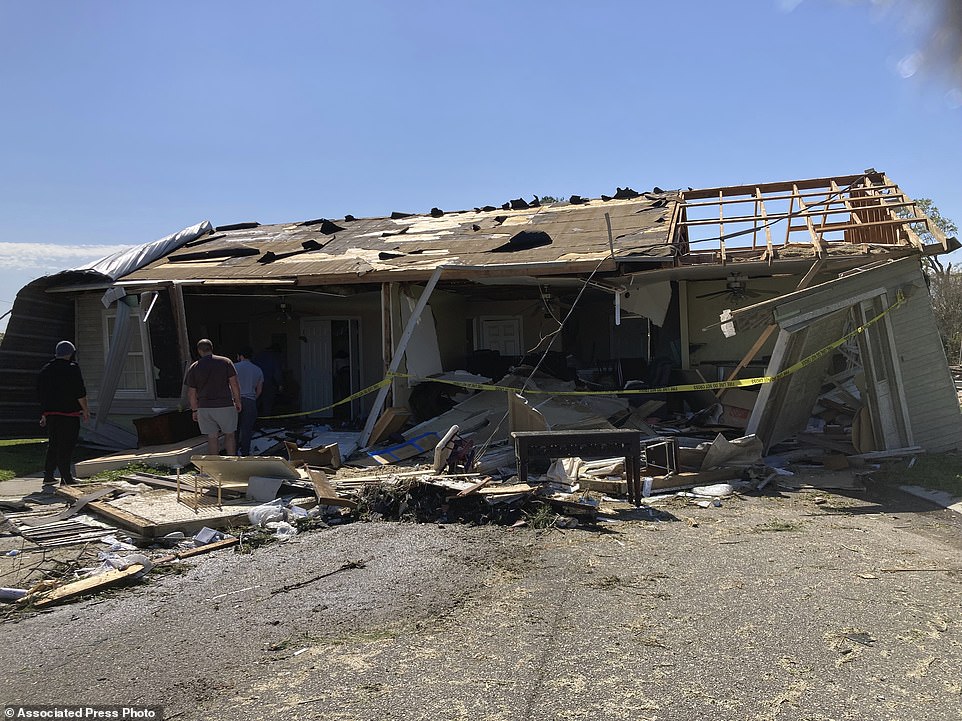 The rest passed like a blur, Castellanos said. An ambulance came to take her daughter to the hospital, where she was operated on overnight and is now all right, she said. Describing the rescue, St. Bernard Parish President Guy McInnis said the hospitalized girl was ‘doing fine.’

Friends and relatives helped Castellanos clean out what belongings could be saved from inside the shattered home, like clothes and mementos, on Wednesday. One of the birds Castellanos kept as pets was standing on the floor, scattered debris all around.

Castellanos said she was thankful for everyone who had come to help with the cleanup, bringing food, garbage bags and work gloves. 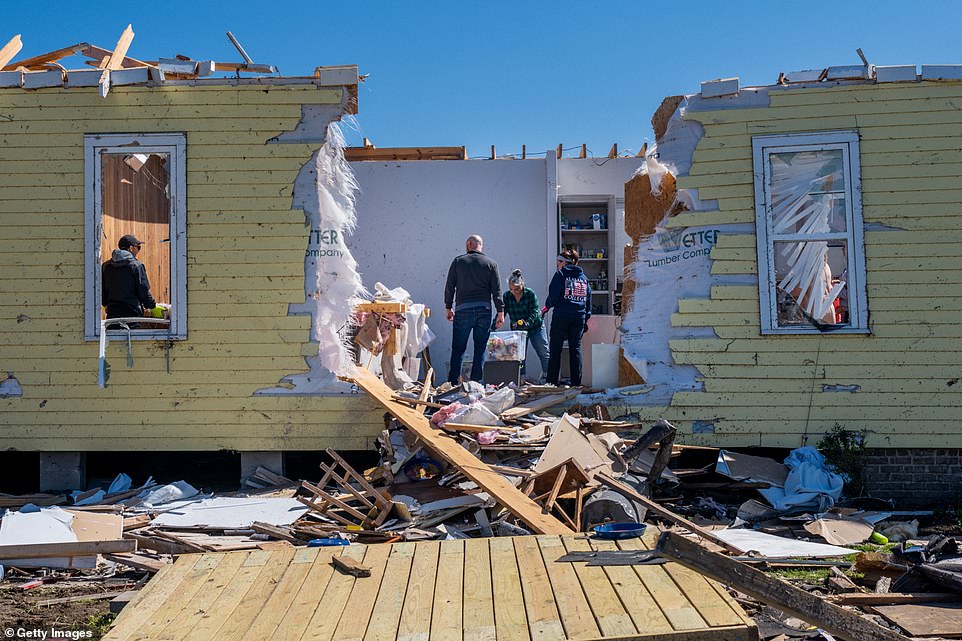 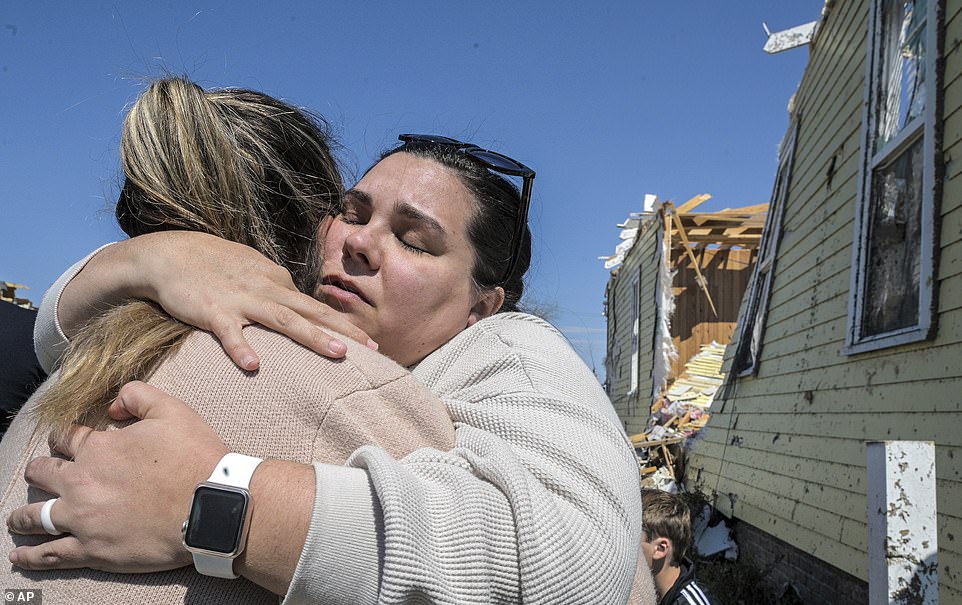 Residents of severely damaged or destroyed homes in Arabi swept up broken glass and tried to salvage their belongings.

The community next to the city´s Lower 9th Ward was wrecked by Hurricane Katrina in 2005 and hit hard again when Hurricane Ida swept through last year.

Stacey Mancuso´s family had just finished repairing the damage from Ida, which ripped off the roof and caused extensive water damage. Huddling in the laundry room with her husband, two children and dogs, they all survived as the tornado blew away part of their new roof.

‘We´re alive. That´s what I can say at this point,’ said Mancuso. Still, the twister was the third time they´ve had major weather damage since Katrina. 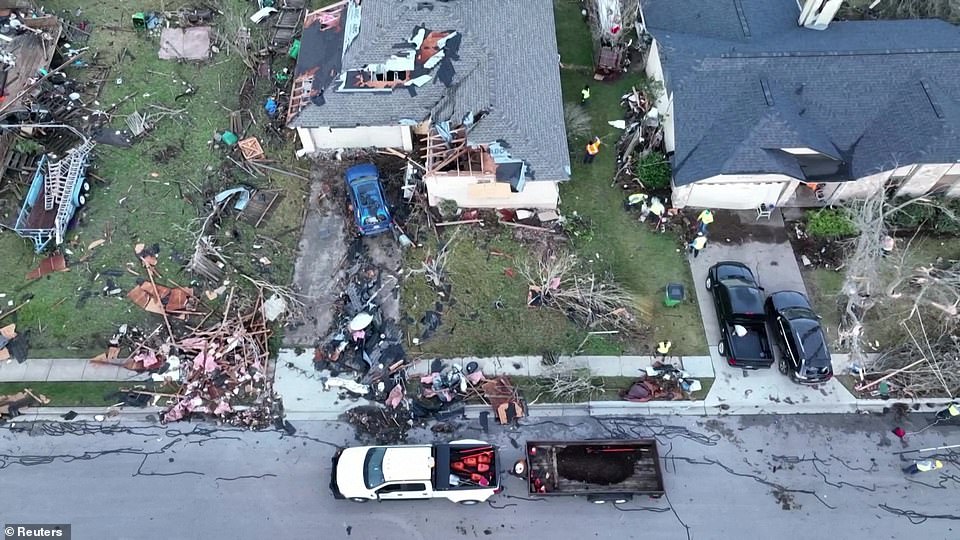 The system, which has already snuffed out the life of one Texas woman and has injured dozens of others, is now moving east across the Lone Star State toward Louisiana, Mississippi and Alabama, National Weather Service Storm Prediction Center say, where it may possibly trigger ‘a regional severe weather outbreak’ 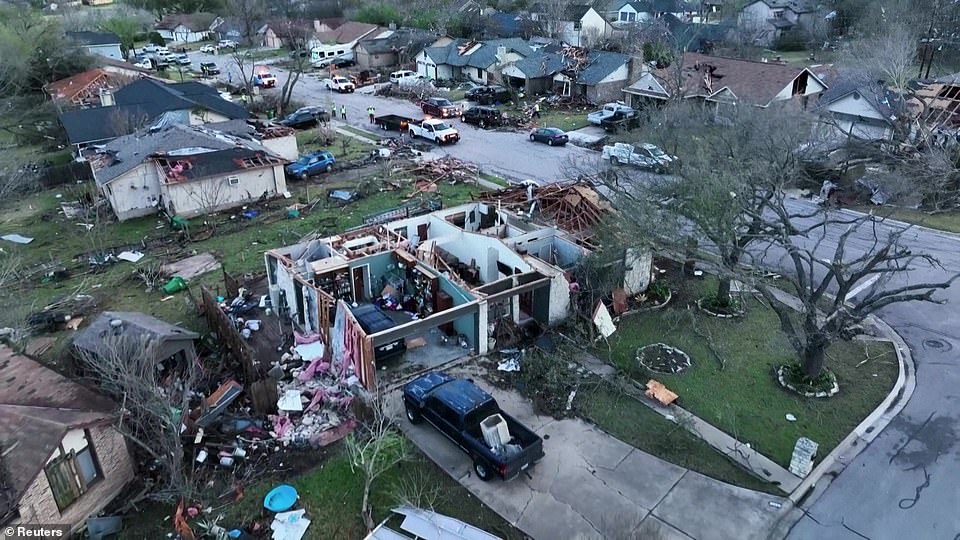 The town in the footage, the small, usually sleepy suburb of Round Rock, saw several tornados rip through its framework Monday night, seeing dozens of homes, businesses, and properties destroyed 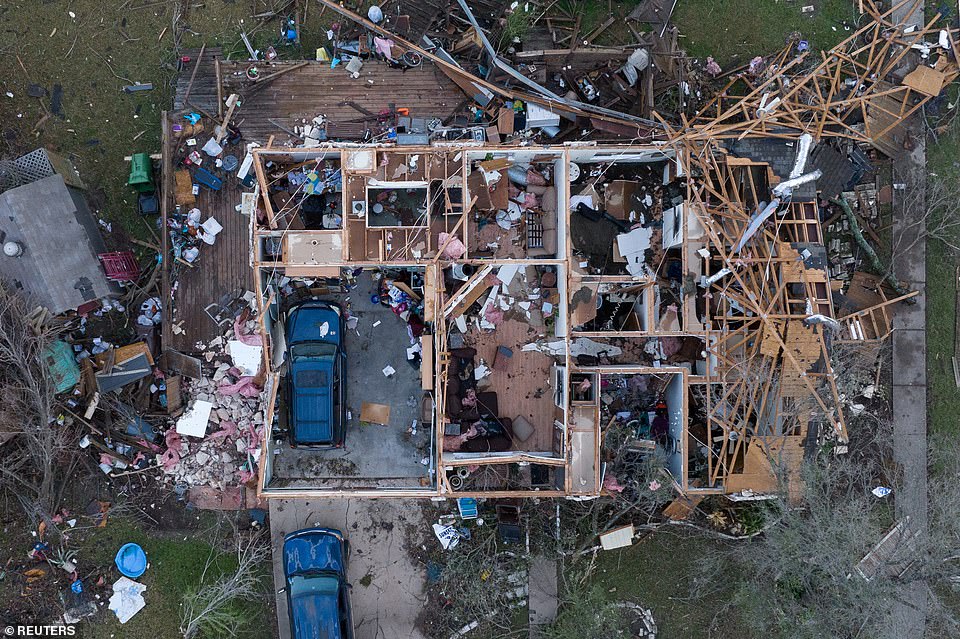 ‘I wasn´t mentally prepared to see what I was seeing,’ said Amy Sims, who jumped into her car when the tornado warning sounded and drove to the Arabi Heights area to check on relatives. She said emergency medics, some crying, were dodging live wires as they went door-to-door through shattered homes.

‘A bomb looked like it had gone off,’ she said, adding that her cousin´s home and family were OK, but houses all around them were flattened.

Television stations broadcast live images as the storm damaged an area about 2 miles (3.2 kilometers) long and a quarter-mile (0.4 milometer) wide in St. Bernard Parish, where Ochsner Health said eight patients were treated in an emergency department.

Louisiana activated 300 National Guard personnel to clear roads and provide support. They joined firefighters and others searching door-to-door to make sure no one had been left behind, said John Rahaim Jr., the parish’s homeland security director. 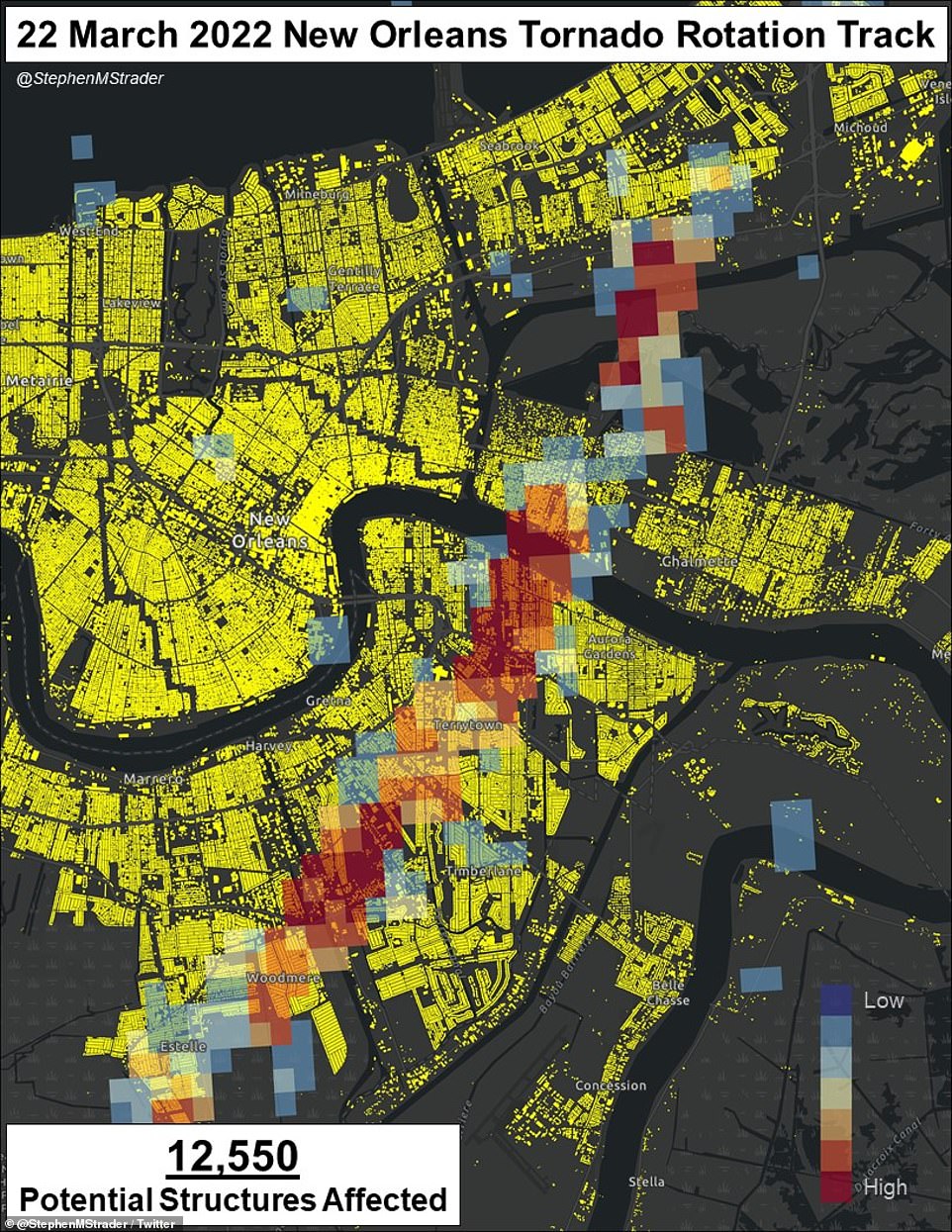 An analysis of the tornado posted by Stephen M. Strader on Twitter 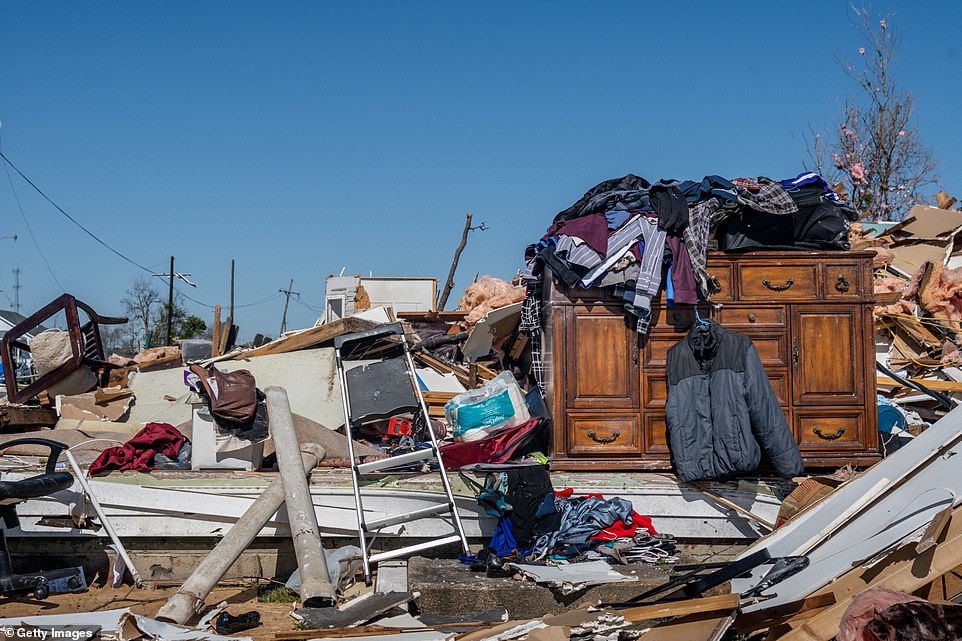 n intact dresser is seen amongst debris in the Arabi neighborhood on March 23, 2022 in New Orleans, Louisiana 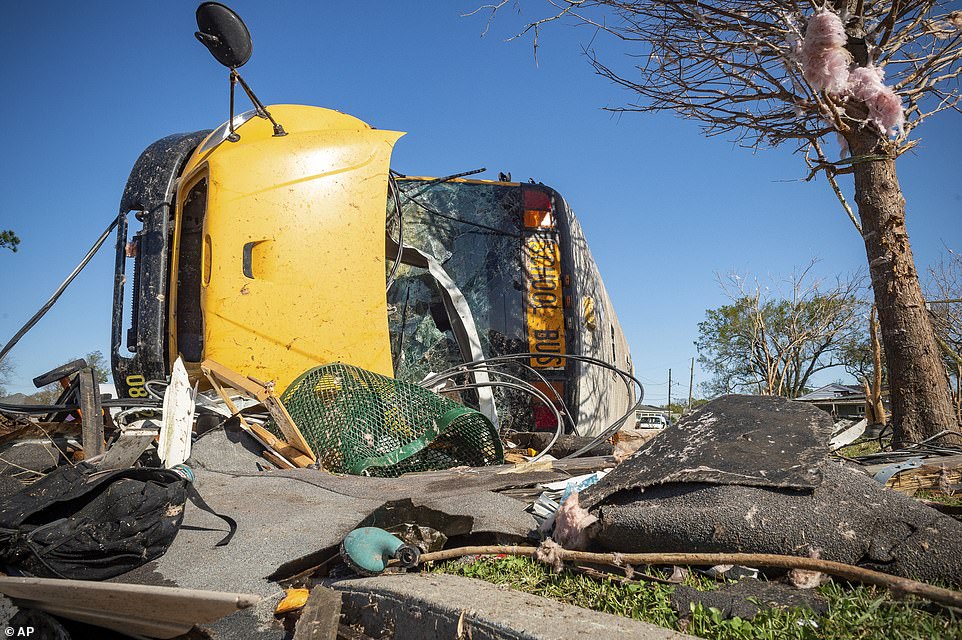 A school bus is overturned after a tornado Tuesday night in Arabie, La., Wednesday, March 23, 2022. Louisiana is sending 300 National Guard troops to the New Orleans area where tornadoes flipped cars, ripped off rooftops 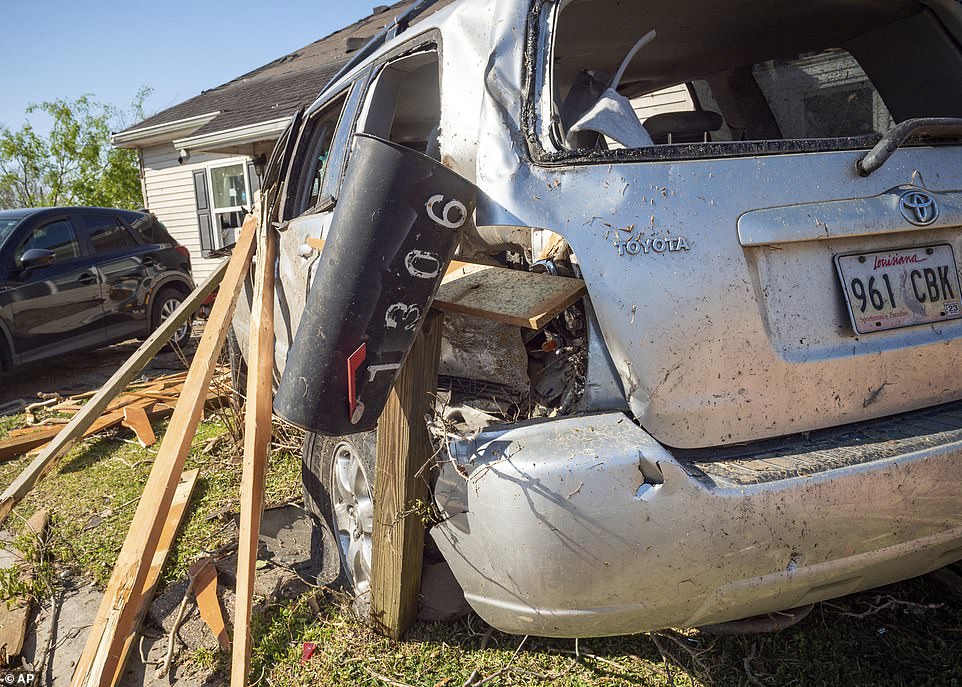 A vehicle is damaged after a tornado Tuesday night in Arabie, La., Wednesday, March 23, 2022. Louisiana is sending 300 National Guard troops to the New Orleans area where tornadoes flipped cars, ripped off rooftops

Entergy reported that about 3,700 of its customers remained without electricity Wednesday. A strong smell of natural gas was in the air, and downed power lines forced emergency workers to walk slowly through the wreckage.

Michelle Malasovich was texting relatives from her home in Arabi when ‘all of a sudden the lights started flickering.’ Her husband saw the twister approaching.

‘It just kept getting louder and louder,’ Malasovich said. After it passed, they saw some columns were blown off their porch, and her Jeep’s windows were blown out. Others fared worse: ‘Our neighbor´s house is in the middle of the street right now.’

Gene Katz said he, his wife and their two children hid in a closet as the tornado pushed their home off its slab and caved in the part where they took shelter.

‘By the time we closed the door, the roof came off, and that was it,’ he said.

As the storm front moved eastward, an apparent twister shredded a metal building and shattered windows east of Mobile Bay.

The weather service reported more than 8 inches (20 centimeters) of rainfall in the central Alabama city of Sylacauga overnight. The roofs of several homes were damaged in Toxey, Alabama, where tornado warnings were issued.

The Mississippi Emergency Management Agency said a dozen counties had damage to homes and two injuries were reported.

The vicious weather hit Texas on Monday, with several tornadoes reported along the Interstate 35 corridor. In Elgin, broken trees lined the rural roads and pieces of metal hung from the branches as residents stepped gingerly through the mess.

‘There used to be a barn there,’ Harkins said, pointing to an empty plot on his uncle´s property, covered with debris.

Texas Gov. Greg Abbott said 10 people were injured by storms in the Crockett area, while more than a dozen were reportedly hurt elsewhere.

The Grayson County Emergency Management Office said a 73-year-old woman was killed in Sherwood Shores, about 60 miles (95 kilometers) north of Dallas, but provided no details.