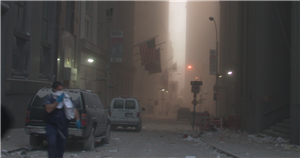 The US Secret Service has released unseen and disturbing pictures taken during the September 11 terror attacks.

The photos offer a new perspective of the tragedy, which claimed nearly 3,000 lives.

Flight 11 crashed into the North Tower, and shortly after, another passenger jet ‒ Flight 175 ‒ was flown into the South Tower.

It collapsed at approximately 10am, killing nearly 3,000 people.

The Secret Service recently tweeted: “This week, as the 20th anniversary of September 11th approaches, we will be sharing photos from that day and the days that followed.

“Some have been shared before and some have never been seen.”

In another, debris is scattered across Ground Zero, with ash blotting out the sky.

Smoke is seen pouring from the towers in a third photo, as fires tear through the buildings.

A special agent, identified only as AJ, was working as part of a truck hijacking squad in Brooklyn, New York, on September 11.

Describing his reaction, he told an FBI podcast: “I always say it reminded me of a monster movie from when I was a kid, like a dinosaur or something out of … [a] creature was chasing people up Broadway.

“But when I went out to Broadway and started looking south I saw … this is not going to be good.

“I wasn't looking at the towers when they started to collapse.

“I was engaged in conversation when you just saw people's eyes get really wide. And everybody just started to say it's coming down.”

AnITV documentary ‘9-11: Life Under Attack’has broadcast a harrowing phone call between a victim of the September 11 attacks and an emergency operator, which depicts a desperate plea for assistance.

Making the call at 9:17am, a woman can be heard begging for help, as she explains that she is stranded with others on the 83rd floor of the tower.

She said: “Is it… Is it… are they going to be able to get somebody up here?

“There’s no one here yet and the floor’s completely engulfed.

“We’re on the floor and we can’t breathe.