As the U.S. tries a new way to protect shipping across the Persian Gulf amid tensions with Iran, it finds itself sailing into uncertain waters.

For decades, the U.S. has considered the waters of the Persian Gulf as critical to its national security. Through the gulf’s narrow mouth, the Strait of Hormuz, 20% of all crude oil sold passes onto the world market. Any disruption there likely will see energy prices spike.

The U.S. has been willing to use its firepower to ensure that doesn’t happen. It escorted ships here in the so-called 1980s ‘Tanker War.’ America fought its last major naval battle in these waters in 1988 against Iran.

Now, the U.S. Navy is trying to put together a new coalition of nations to counter what it sees as a renewed maritime threat from Iran. But the situation decades later couldn’t be more different. 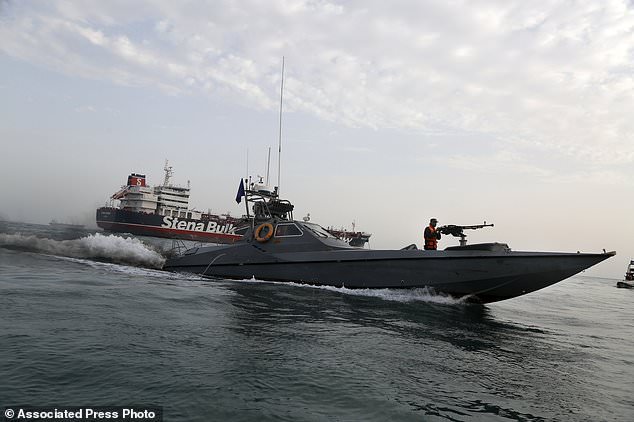 A speedboat of the Iran’s Revolutionary Guard moves around a British-flagged oil tanker, the Stena Impero, which was seized by the Guard, in the Iranian port of Bandar Abbas, July 21, 2019. The U.S. Navy is trying to put together a new coalition of nations to counter what it sees as a renewed maritime threat from Iran. Meanwhile, Iran finds itself backed into a corner and ready for a possible conflict 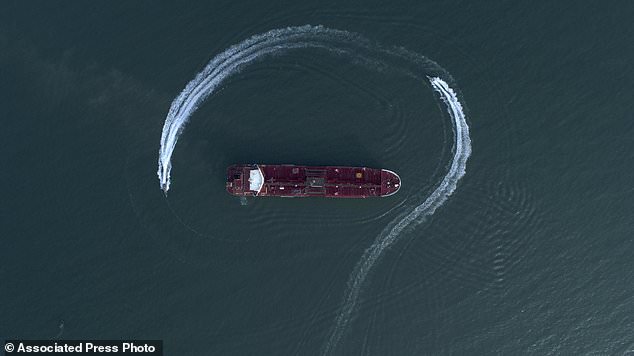 An aerial view shows a speedboat of Iran’s Revolutionary Guard moving around the British-flagged oil tanker Stena Impero, which was seized in the Strait of Hormuz by the Guard, in the Iranian port of Bandar Abbas, July 21, 2019

The U.S. public is fatigued from years of Mideast warfare after the Sept. 11 attacks. The demand for Persian Gulf oil has switched to Asia. Gulf Arab nations poured billions of dollars into their own weapons purchases while inviting a host of nations to station their own forces here, even as infighting dominates their relations.

Meanwhile, Iran finds itself backed into a corner and ready for a possible conflict it had 30 years for which to prepare. It stands poised this week to further break the terms of its 2015 nuclear deal with world powers, over a year after President Donald Trump unilaterally withdrew America from the accord and imposed crippling sanctions on the country.

‘It is plausible to imagine a scenario where these forces stumble into some type of accidental escalation,’ said Becca Wasser, a senior policy analyst at the RAND Corp. who studies the region. ‘While U.S. efforts are intended to deter, Iran may view increased U.S. maritime presence as offensive in nature or as preparation for a larger attack on Iran and respond accordingly.’ 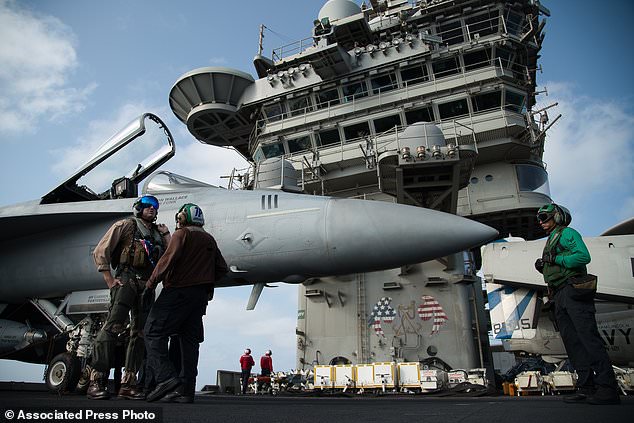 In this June 3, 2019 file photo, a pilot speaks to a crew member by an F/A-18 fighter jet on the deck of the USS Abraham Lincoln aircraft carrier in the Arabian Sea

The U.S.-led Sentinel Program aims to secure the broader Persian Gulf region. It includes surveillance of the Strait of Hormuz and the Bab el-Mandeb, another narrow strait that connects the Red Sea and the Gulf of Aden off Yemen and East Africa. Smaller patrol boats and other craft will be available for rapid response.

The plan also allows for nations to escort their own ships through the region, said Cmdr. Joshua Frey, a spokesman for the U.S. Navy’s 5th Fleet, which oversees the region. For now, the Bahrain-based 5th Fleet is not escorting U.S.-flagged ships through waters, though that remains a possibility, he said.

So far, only Australia, Bahrain and the United Kingdom have said they’ll join the U.S. program. India has begun escorting its own ships independently of the U.S. coalition, while China has suggested it could get involved as well.

The U.S. Navy has sent Arleigh Burke-class guided missile destroyers to chokepoint positions, like either end of the Strait of Hormuz. There, they observe ship traffic and monitor for anything unusual as drones and other aircraft fly surveillance routes overhead, Frey said.

Some of what the U.S. plan calls for already falls under the routine operations of the 5th Fleet, which has been in the region since 1995. U.S. Navy ships coming in and out of the Persian Gulf often find themselves shadowed by Iranian Revolutionary Guard vessels. Some incidents have seen the U.S. fire warning shots or Iranian forces test-fire missiles nearby. 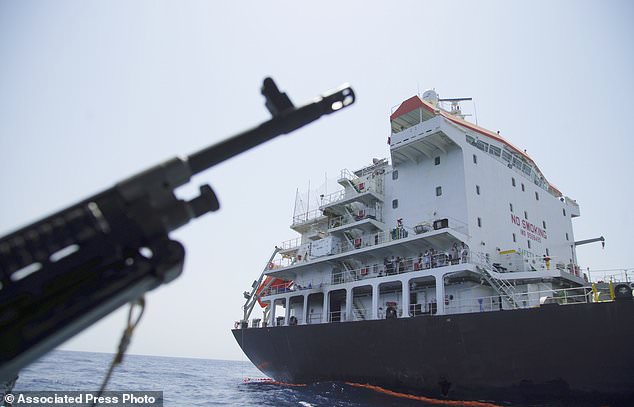 In this June 19, 2019 file photo, sailors stand on deck above a hole the U.S. Navy says was made by a limpet mine on the damaged Panama-flagged, Japanese owned oil tanker Kokuka Courageous, anchored off Fujairah, United Arab Emirates, during a trip organized by the Navy for journalists

What’s different now though is shippers find themselves under attack. The U.S. blames Iran for the apparent limpet mine explosions on four vessels in May and another two in June sailing in the Gulf of Oman near the Strait of Hormuz, something Iran denies being behind. Iran also seized a British-flagged oil tanker and another based in the United Arab Emirates.

Facing growing financial pressure from U.S. sanctions on its oil industry, Iran has sought diplomatic support from those still in the deal, while increasing pressure militarily as well. Even President Hassan Rouhani, who had supported rapprochement with the U.S. in the run-up to the 2015 deal, has been threatening to close off the Strait of Hormuz if Tehran can’t sell its oil abroad.

‘If someday, the United States decides to block Iran’s oil, no oil will be exported from the Persian Gulf,’ he told a cheering crowd in December 2018.

That raises the stakes for conflict.

‘The United States is not seeking a military confrontation, and are certainly not soliciting international support for any provocation,’ Frey said. ‘With that said, while the intent of our presence is deterrence and stability, we are prepared to defend (coalition) member nations’ interests from attacks in the maritime domain.’

But it won’t be just the United States involved if things spin out of control, nor will it likely be confined to the high seas.

Since the 1980 Carter Doctrine, the U.S. has vowed to use its military power to defend its interests in the oil-rich Persian Gulf. That saw America enter the ‘Tanker War’ toward the end of the 1980s Iran-Iraq war, in which U.S. naval ships escorted reflagged Kuwaiti oil tankers. It culminated in a one-day naval battle between Washington and Tehran, and also saw America accidentally shoot down an Iranian passenger jet, killing 290 people.

The 1991 Gulf War, in which a U.S.-led coalition expelled Iraqi dictator Saddam Hussein’s troops from Kuwait, further cemented America’s presence, as did its later wars in Afghanistan and Iraq.

‘The Gulf states have long sought to give external nations a stake in their security and have done so through basing agreements and lucrative arms sales,’ said Wasser, the RAND analyst. ‘This build up is likely to continue because the Gulf states see it as a net gain for their security.’

And it hasn’t just been the Americans in recent years boosting their presence. The French run their own naval base out of Abu Dhabi, the Emirati capital. The British, who withdrew their forces from the Gulf in the 1970s, recently reopened a naval base in Bahrain. Even Turkey under President Recep Tayyip Erdogan opened a military base in Qatar. 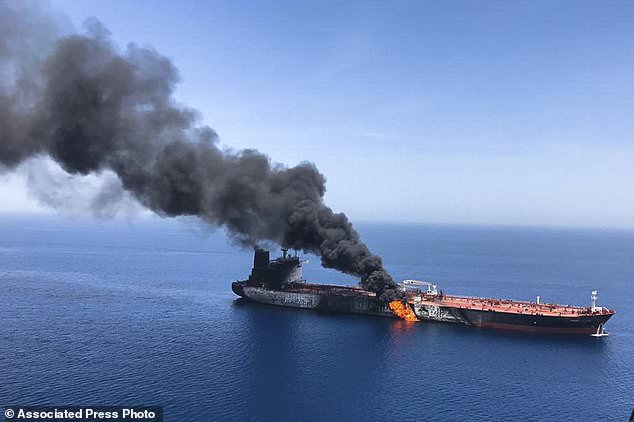 For Iran, it can only look at the wider build-up with suspicion, especially as the U.S. and its coalition bring more warships to the region. While the U.S. and the U.K. had no choice but to respond to the Iranian attacks, their increasing presence can heighten tensions, said Michael Stephens, a senior research fellow who focuses on the Mideast at London’s Royal United Services Institute for Defense and Security Studies.

‘When you change the chessboard, you are effectively permanently changing the conditions under which you’re operating,’ Stephens said. ‘How you cannot make that look like an escalation is anyone’s guess because it is an escalation.’

Iran itself hasn’t sat still. The Guard, a paramilitary force answerable only to Supreme Leader Ayatollah Ali Khamenei, pilot speedboats through the Strait of Hormuz and run drills practicing swarming larger warships. It possesses shore-to-ship missiles. It also, according to U.S. officials, has special forces capable of sneaking up on unsuspecting ships to plant explosive mines.

The ‘rules’ that govern military confrontations in the Persian Gulf seem to be changing, Stephens said, with the growing U.S. Navy operation, Iran’s willingness to seize and allegedly attack ships, and the collapsing nuclear deal pushing Tehran toward drastic action. 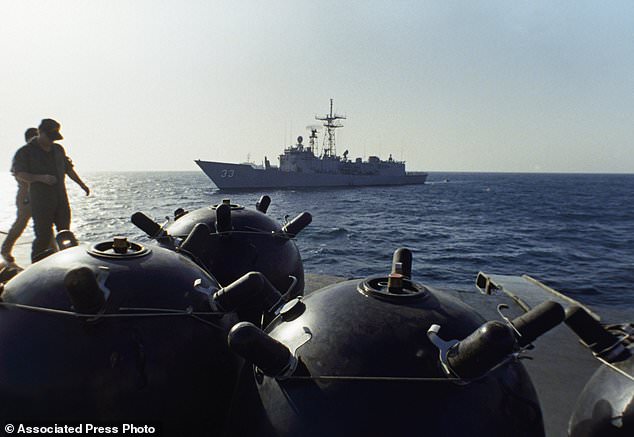 This Sept. 21, 1987 file photo shows mines aboard the Iranian ship Iran Ajr being inspected by a boarding party from the USS Lasalle in the Persian Gulf 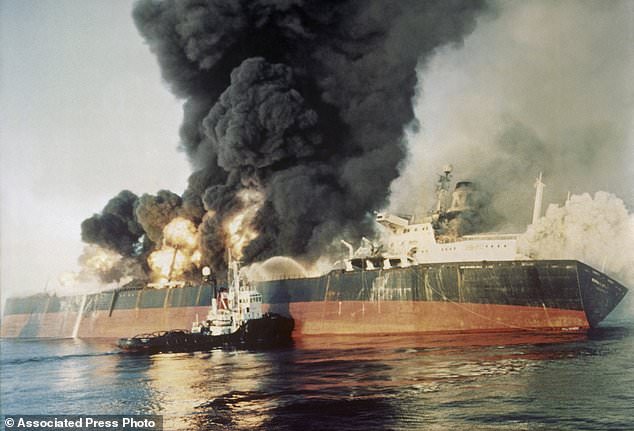 In this Dec. 6, 1987 file photo, the Singapore-registered tanker Norman Atlantic sits ablaze in the Strait of Hormuz after being attacked by an Iranian gunboat

One of the immediate dangers is in the response to Iran itself. During the Somali piracy crisis of the 2000s, the rush of navies to the region saw fishermen wrongly targeted for attack in at least one incident, said Salvatore R. Mercogliano, a former merchant mariner and associate professor of history at North Carolina’s Campbell University.

Adding additional forces, especially those that may not respond to a single command and exercise different rules of engagement, could raise the risks of a conflict, Mercogliano said. Trying to run convoys of ships through the areas also would slow down traffic and delay shipments. Meanwhile, the Guard’s small fast boats easily can be missed among the fishermen and traditional dhow ships moving through the busy waters.

‘It is a very difficult area to track any traffic just due to the huge amount of numbers in that area,’ Mercogliano said. ‘If you only have a few ships on patrol, a few air assets, a few drone assets, it’s very easy to get lured one way or another and miss something.’

Meanwhile, U.S. authorities warn that ships in the region have reported ‘spoofed bridge-to-bridge communications from unknown entities falsely claiming to be U.S. or coalition warships.’ Ships also have reported interference with their GPS systems, according to the U.S. Transportation Department’s Maritime Administration. That could see ships accidentally enter Iranian territorial waters and offer a pretense for its forces to board.

For international business, the risks could be clearly seen after crude oil prices jumped nearly 4% after the June limpet mine attacks in the Gulf of Oman. Even though the majority of the oil and natural gas passing through the Strait of Hormuz now heads to Asia, prices could spike again.

Insurance premiums for shipments shot up in the area after the June limpet mine attacks by 10%, with additional war-risk premiums costing around $100,000, according to the market data firm Refinitiv.

For mariners in the region, the Strait of Hormuz has been declared a temporary extended risk zone, qualifying them for a bonus and higher death and disability coverage. And while the mariners may be on Western-owned or -flagged vessels, many come from poorer countries in Eastern Europe or Asia. The 23 crewmembers aboard the Stena Impero, the British-flagged oil tanker seized by Iran on July 19 and still held today, are Filipino, Indian, Latvian and Russian.

‘The normal seafarers are the ones being caught up in this geopolitical game,’ said Jacqueline Smith, the maritime coordinator for International Transportation Workers’ Federation.