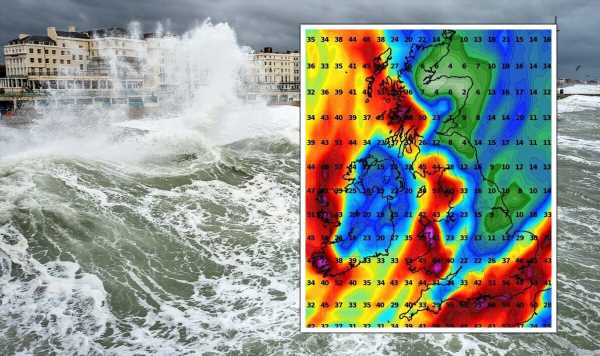 The mild autumn temperatures have currently been put on ice – and this is due to a series of flood alerts and weather warnings all pointing towards severe gales, heavy rain and now thunderstorms. Much of the country began the work and school commute in torrential rain, especially those living along the south coast, this morning. It’s almost as though a switch has been flicked and the warm, unseasonable mercury has disappeared, with a new weather warning now being issued for tomorrow, predicting thunderstorms smashing against the southern coast from Kent to Dorset and even much of Wales overnight and into the early hours of the morning.

“Downpours are likely to be most frequent along the coast. Some locations may receive 30-40 mm of rain in a few hours, whilst thunderstorms will be mostly limited to coastal districts where lightning and hail may be additional hazards.”

The warning particularly mentions hail, standing water and flooding to some homes as being the main areas of caution, plus the chance of some buildings being damaged by lightning strikes. Delays on public transport, along with short term power loss is also “likely,” it adds.

Jim Dale, senior meteorologist at British Weather Services told Express.co.uk that people across the nation should prepare for more unsettled weather to last for at least another week. He said: “Next week starts unsettled with more rain and some wind but nothing over the top at this moment.”

But there is a silver lining – and that’s the news that much of the nation will begin hotting up once more towards the end of next Thursday, in a period of mildness lasting into the weekend. Mr Dale added: “It does settle by Thursday onwards and it actually starts to turn warmer again 15/16C, it will be Friday into next weekend in the southeast.”

In the meantime, Bonfire Night could be a washout in some places. The UK-wide forecast for the weekend, from the Met Office, reads: “A chilly start across eastern areas on Saturday, ahead of rain pushing east through the day. This lingering across southeast England on Sunday.”

The Weather Outlook founder Brian Gaze said there will be some temporary respite for some parts of the nation tomorrow. He added: “Tomorrow scattered showers affect the north and west. However, many places miss them and in other regions, it should be dry. Despite sunny spells developing it will be quite cold.”

Looking ahead to Bonfire Night he continued: “During Saturday a band of rain pushes eastwards across the UK. It will probably clear from central and western regions through the afternoon to leave dry conditions for fireworks parties. However, in the southeast it could linger into the evening.

And into next week: “Through Monday, Tuesday and Wednesday it stays unsettled. All regions have showers or longer spells of rain. Temperatures fluctuate around the seasonal average.”

The Met Office long-range weather forecast from November 7 to November 16 also warns of more disruptive weather, and says: “Monday will most likely bring unsettled and cloudy conditions with areas of rain or showers, locally heavy, likely to spread northeastwards.

“Windy conditions likely with possible severe gales in exposed locations in the west. Continuing through the rest of the period, changeable and unsettled conditions are likely.

“Frequent spells of wet and windy weather, sometimes heavy, are likely further west and northwest, with an increasing chance of drier and brighter conditions in the southeast towards the end of the period.

“It will often be windy with strong winds and gales likely at times, particularly for coastal regions in the north and northwest. Temperatures are expected to generally be around average for this time of year.”

A yellow weather warning for southern England for rain is in place until 3pm today, with a statement from the Met Office saying: “Heavy rain will affect southeastern parts of England during Thursday morning, clearing eastwards early afternoon.

“Around 20-30 mm of rain is expected fairly widely, with 40 mm in a few places near English Channel coasts. The ground is fairly wet, and recent fallen leaves may reduce drainage of surface water in some locations.”