Wellington: New Zealand is planning to invest more in recycling plants and set up a government-led taskforce to work out how to grapple with the fallout from China's ban on waste imports, its associate environment minister said on Thursday. 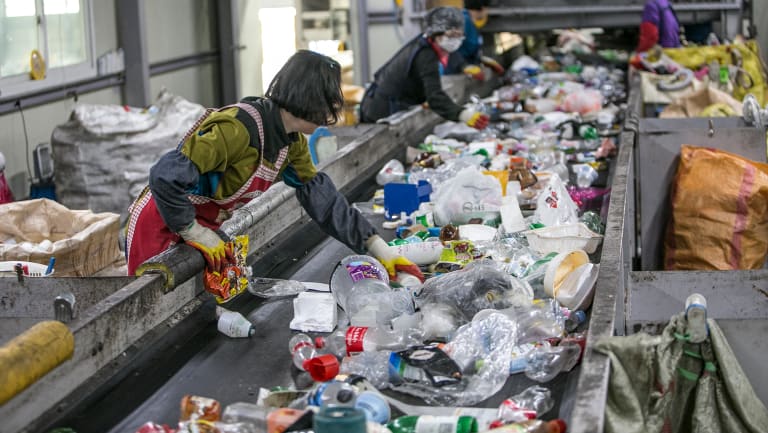 Workers separate plastic waste from other waste moving along a conveyor at a a recycling facility in South Korea. In a bid to curb its own rampant pollution, China has clamped down on the import of unsorted paper and plastics. The effects of the strict new standards on halting impurities in waste imports are now being felt worldwide.

New Zealand had been sending 15 million kilograms – worth around NZ$21 million ($14.6 million) – a year of waste to China, mostly paper and plastics that are now piling up as waste companies scrambled to divert it to processors in South-East Asia.

"The ban has had a greater impact than the industry expected and we need a coordinated response from central and local government, together with the waste and business sectors," Associate Minister for the Environment Eugenie Sage said.

The government plans to use its existing waste levy to invest in more onshore recycling plants, she added.

China, the world's biggest importer of plastic waste, has stopped accepting shipments of rubbish, such as plastic and paper, as part of a campaign against "foreign garbage".

The ban has upended the world's waste handling supply chain and caused massive pile-ups of trash from Asia to Europe, as exporters struggled to find new buyers for the garbage.

Much of New Zealand's waste had been diverted to processing plants in Indonesia, Malaysia and Thailand, but some stockpiles were building up around the country.

"We are also looking at options such as expanding the waste levy to more landfills, improving the data we have on waste including recyclables, and other tools to reduce the environment harm of products such as product stewardship, levies and bans," Sage said.

Governments in Britain, the European Union and Australia have announced plans to confront growing waste as a result of ban with the British introducing a deposit return scheme for plastic bottles and the EU mulling a plastic tax.