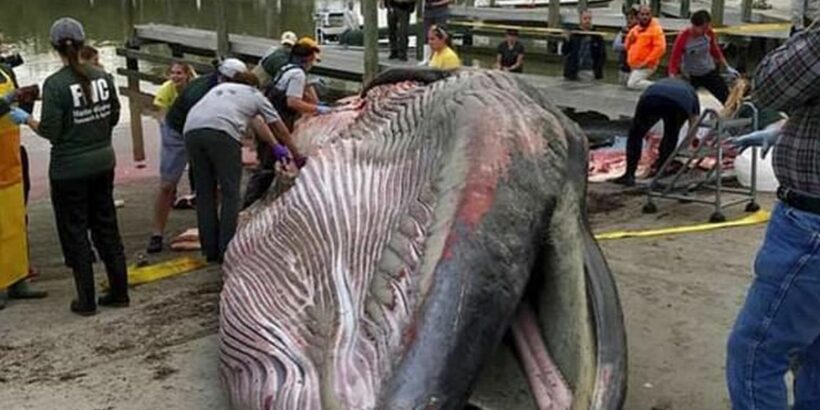 A new species of whale has been discovered, but scientists say it is already endangered.

Experts believe there are fewer than 100 of the newly-discovered whale after one of them washed up on Florida's stretch of the Gulf of Mexico.

The species of baleen whale, which has been called Rice's whale, is already threatened with extinction despite only just being properly identified.

Experts undertook an analysis of the whale's skull after it washed up in 2019 which revealed key differences compared with other baleen whale species.

It now faces significant threats to its existence including oil spills, ocean debris, vessel strikes and the possibility of becoming entangled in fishing gear.

An average whale is said to weigh around 60,000 pounds (around 27,000kg and five times as heavy as an elephant), growing to a staggering 42ft long.

Not much is known about their life expectancy but closely-related species reach sexual maturity at the age of nine and can live around 60 years.

In a statement, the National Oceanic and Atmospheric Administration (NOAA) said: "The discovery is exciting and will allow them to better understand and protect this rare baleen whale."

The whale has been named in honour of renowned American biologist Dale Rice who had a distinguished career in marine mammal science.

He died in 2017 but he was the first researcher to recognise that the species was present in the Gulf of Mexico.

Classifying the species dates back 30 years. NOAA scientist and co-author of the latest study Dr Keith Mullin, along with his colleagues, have been studying the whales at sea since the 1990s. NOAA Fisheries scientist and study author Dr Patricia Rosel said: "The distinguishing characteristics are in the shape and orientations of several bones in the top of the skull that are located around the blowhole."

Dr Rosel was able to examine the skull after one of the whales became stranded in Florida off the Everglades National Park in January 2019.