Non-fungible tokens have seen a "significant" rise manipulative practices that exaggerate prices, liquidity and launder money, according to new data — a growing fear as the sector turns increasingly volatile.

A report released Wednesday from blockchain analytics platform, Chainalysis, found “significant wash trading and some money laundering" does occur, with at least part of those questionable flows running through ultra-hot NFTs, a sub-sector of the growing cryptocurrency market.

Chainalysis data comes as Open Sea, the largest marketplace for buying and selling NFTs, had its best month yet in January with $4.9 billion in transaction volume, raising at least a few questions regarding exactly how much of the overall market is legitimate.

Many observers of the crypto market have been quick to suggest and even point out that the market is plagued by price manipulative practices such as wash trading, a practice in which traders take both sides of a sale to inflate its value.

Wash trading and money laundering are proving “extremely easy to trace on the blockchain” according to the firm’s director of research, Kim Grauer. 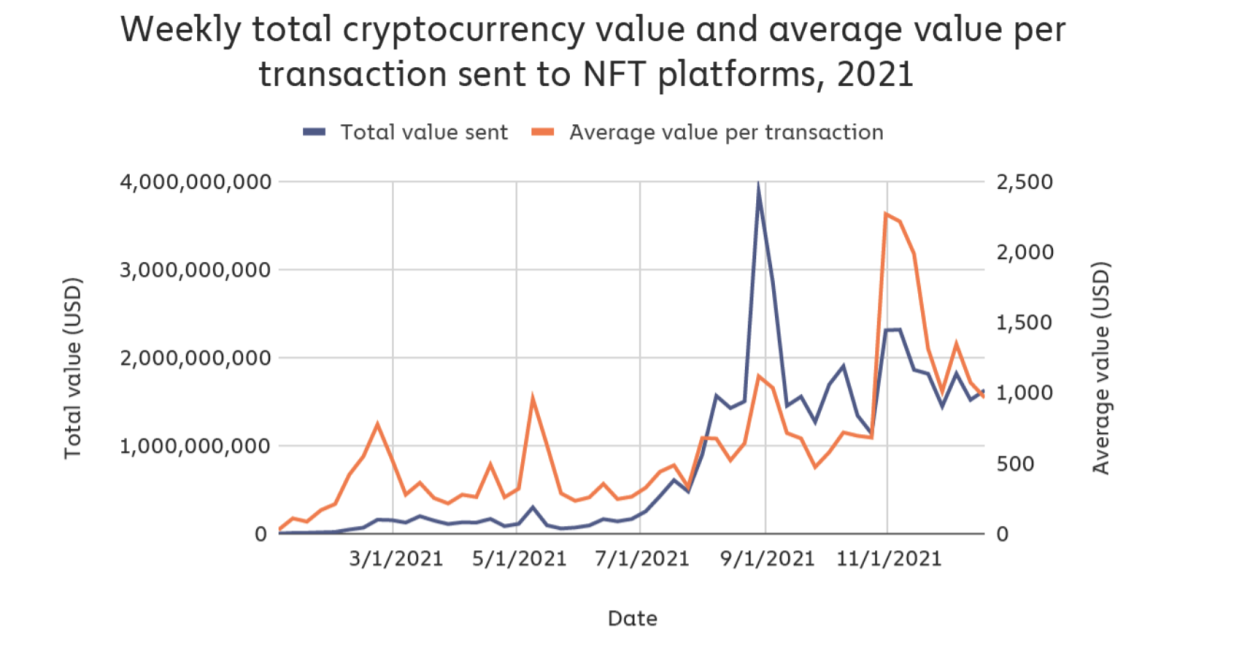 Wash trading often boosts an asset's demand and underlying price, and is being increasingly cited in some NFT transactions. The practice can be pervasive in the crypto markets, which involve wallet addresses that can be created pseudonymously for free, with little effort.

While wash trading is illegal for conventional securities and futures instruments, it's not been actively enforced within the budding NFT movement. Sometimes, it is literally programmed into a platform's reward model.

Last month, Decrypt reported that a newer Ethereum (ETH-USD)-based NFT platform, LooksRare, saw a massive upswing in trading volume thanks to wash trading. That included a Meebits NFT sold for a jaw-dropping $100 million worth of trading volume in just two transactions.

Yet the data presented by Chainalysis shows that the practice is sometimes not even worth the effort.

“We found that by and large, [wash trading] really is not an attractive thing to do in the NFT space,” Grauer told Yahoo Finance.

Apart from how easily was trading can be traced, Grauer pointed to the high transaction costs (i.e. Ethereum gas fees) for trading NFTs.

Looking at a sample of buyers and sellers across multiple NFT marketplaces, the study tracked the profitability of 252 traders who they assumed with a high degree of confidence could be classified as habitual wash traders.

Each of these traders conducted NFT transactions at least 25 times between self-financing wallet addresses, meaning those funded by the sellers address or the address that funded the selling address. Of those habitual washers, the study found that only 110 profited, while the other 152 lost money. However, profitable wash traders still made out very well.

According to the report, the 110 profitable wash traders collectively made nearly $8.9 million, which dwarfed the $416,984 in losses made by the other 152 habitual wash traders.

“We don’t see wash trading as an effective or reliable way for criminals to make money because of both the cost spent on gas, the traceability, and the risk of no payout unless someone takes the bait,” Grauer added.

As Yahoo Finance has previously reported, money laundering in crypto assets is far easier to track than in government issued fiat currencies. The study found that the value in cryptocurrencies sent to NFT marketplaces from illicit wallet addresses reached $1.4 million in 2021.

Crime will likely rise as more investors show interest in NFTs. However, those sums are relatively small: Chainalysis previously found that $8.6 billion of illicit funds were laundered in on a total $44.2 billion worth of money that went to NFT marketplaces during the same period.

Read the latest cryptocurrency and bitcoin news from Yahoo Finance