An NHS administrator who led a secret double life as an online paedophile avoided jail today after she said her squalid behaviour occurred during an abusive romance with a former boyfriend.

Laura Nixon-Corfield, 33, swapped explicit pictures of youngsters with the man along with shocking messages including: ‘I like seeing girls acting as w****s, it shows what they’ll be as adults – start them young!’

Police were called in after Nixon-Corfield who works as a clinical administrator for the National Institute for Health Research attended a hospital near her home in Manchester complaining of suicidal thoughts and confessing she indecent images.

Officers raided her home in the city’s Levenshulme area and found her laptop contained images of children aged between one to 12 with the majority of youngsters being aged between six and eight and who appeared to be in distress and pain.

Inquiries revealed there was an attempt to delete the images through a computer software programme.

In a statement Nixon-Corfield who also officiates at roller skating events and who previously worked at the Christie cancer hospital said: ‘I fully admit to the offences alleged in the indictment on the full facts.

‘I became involved in a relationship with someone which was of a controlling and abusive nature.

‘The control fell far short of duress and I am still responsible for my actions, which were willing particularly with the offences.

‘I accept full responsibility for my actions and do not seek to blame on somebody else for this course of offending.’ 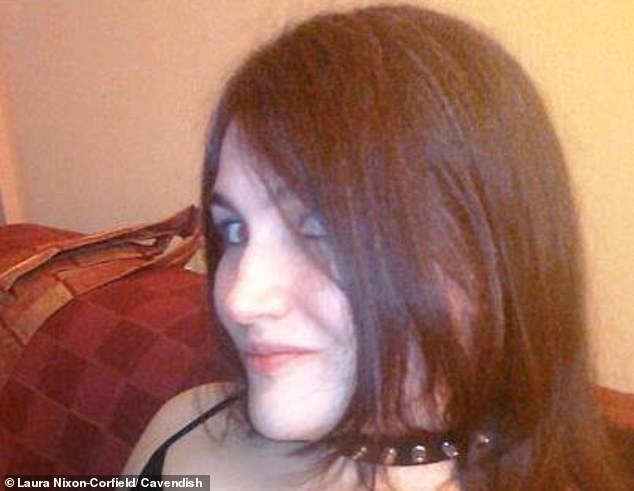 At Manchester Crown Court, Nixon-Corfield wept as she admitted possessing or distributing 821 indecent images and was given two years jail suspended for two years.

She was also ordered to sign the Sex Offender Register for ten years and was made subject of a Sexual Harm Prevention Order.

The ex- boyfriend who is currently facing an investigation over the images cannot be named for legal reasons.

Prosecutor Miss Charlotte Crangle said: ‘The offences came to light in June 10 2017 when the defendant attended the Manchester Royal Infirmary in the early hours of the morning, she was indicating having suicidal thoughts.

‘When seen by the mental health nurse she disclosed that she had been invoked in a relationship with a male and she had been sending indecent images to him.

‘She said she felt under pressure from him to do this and the nursing staff then informed the police. Officers attended at her home and her mobile phone was seized along with a Lenonvo Laptop.

‘She gave a prepared statement indicating that she first met her boyfriend when she was and their relationship began to become sexual. 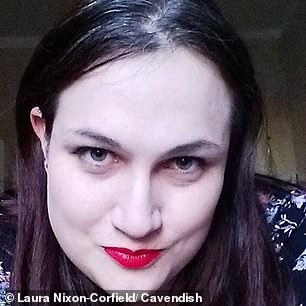 At Manchester Crown Court, Nixon-Corfield wept as she admitted possessing or distributing 821 indecent images and was given two years jail suspended for two years

‘He began to bombard her with demands and she felt under pressure to comply, she felt she had to do exactly what he told her, including sending pictures of children.

‘There was a large number of pornographic images which she sent to him involving adults and adults performing sexual acts.

‘She said she felt controlled by him, he made her do and say things and the reason behind why she went to the hospital was to stop what was going on.

‘She gave the prepared statement and answered ‘no comment’ to any further questions. She was released under investigation at that stage and her phone and computer was sent off for analysis.’

After police found the images, Nixon-Corfield was quizzed again and maintained she felt ‘under pressure’ from her ex-boyfriend ‘to behave in this way.’

Miss Crangle added: ‘She said she thought he was targeting her at a time when she was very low and depressed and down and was doing and saying what he told her to do to keep him happy.

‘She said she knew what she was doing but said she never derived any sexual gratification from it.

‘She had done it for him and she was prepared to support a prosecution against him. He was arrested and interviewed and is under investigation. It is clear from the chat logs that the defendant was willing and fully participated in the sexual behaviour.

‘It appeared she did derive sexual gratification from the chats.

One of the comments said: ‘I like seeing girls acting as w****s, it shows what they’ll be as adults’ and ‘start them that young’.

‘There were other various comments referring to sexual acts against children and other similar comments of that nature. The age of the children was a vulnerable age. The images were described to show them in distress and in pain.’

In mitigation defence lawyer Harriet Johnson said: ‘It would take a hard heart not to be disgusted by the messages that exist in this case – and this also applies to Laura Nixon-Corfield.

‘She does not wish any sort of blame upon somebody else, she accepts her actions were willingly undertaken. But there was pressure, which she maintains, and she was in an abusive relationship.

‘She is adamant that she wishes no mercy or no excuse made on her behalf and she does not approve her behaviour and she became caught up in her own offences. Her good character has been destroyed as a result of her confession.

‘The courts tragically see these offences on a regular basis but it is rare to see complete cooperation, admission and acceptance.

‘She has brought a bag with her today and is under no illusion of what faces her. She lost her employment and has lost any shred of self respect she had.

‘She has shown genuine remorse and understanding and on her behalf a suspended sentence is not as is often reported, as walking free.’

Sentencing Judge Hilary Manley told Nixon-Corfield: ‘You embarked on a relationship with this man when you were on an extremely low ebb in your life.

‘You have suffered and executed your own frailty and I find you were devastated during the course of his suggestion that you become involved in the possession and distribution of those vile images.

‘However you are an intelligent thinking person. You did not have to do any of the things asked if you and you did not have a gun held to you head either literally or metaphorically – you were a willing participant.

‘What was depicted from those messaged you sent to each other state that you were involved in this with some type of enthusiasm.

‘You received genuine gratification from these indecent images. The phrase ‘indecent images of children’ does not express the child’s sexual torture they suffer in the making of these images.

‘When these images are downloaded this redirects the demand and adds to more sexual torture for the child. Distributing these images is peddling the restriction of the future of these children.

‘These courts know the majority of their lives have long been devastated and damaged due to their sexual abuse.

‘I find you genuinely became tormented by what you had been doing and as a result you felt you no longer wanted to hide it from yourself and that is a great example of remorse. You have taken steps to amend what you did.’