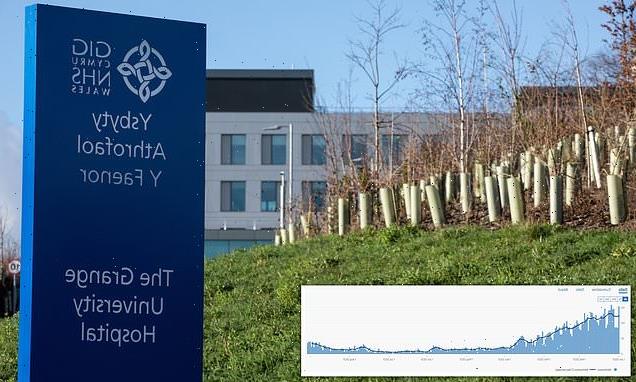 A hospital in Wales has moved to red status after being inundated with critically-ill Covid patients, a doctor revealed today.

More than half of the 24 ICU beds at Grange University Hospital in Cwmbran in south east Wales are now taken up with the virus.

Dr Ami Jones, an intensivist at the NHS hospital, said staff were now experiencing  the ‘next wave of Covid patients’.

Aneurin Bevan University Health Board, which oversees the hospital and three others in the area, said it is treating more than 40 infected patients across its sites.

It warned the number of Covid patients in ICU at the Grange University Hospital is increasing and most of them are unvaccinated.

A spokesperson said it does ‘not have any plans’ to suspend any services, but Dr Jones told MailOnline elective procedures will get cancelled if there are no beds.

There was an average of 36 admissions a day in the week leading up to September 3, but this is lower than previous waves when the rolling seven-day average admissions reached 130.

Across the UK, there has been around 945 daily hospitalisations in the last week.

It comes as a SAGE member revealed ministers were planning for a two-week ‘firebreak’ lockdown in October if hospital admissions continue to rise.

No10 denied the claims, but admitted there were some contingency plans in place to be used as a last resort. 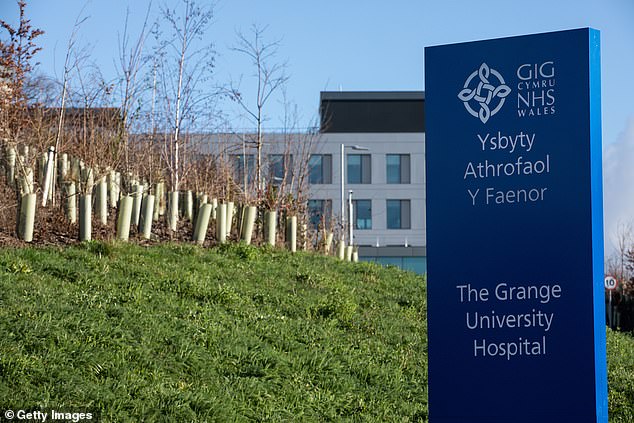 More than half of the 24 ICU beds at Grange University Hospital in south east Wales, which is part of Aneurin Bevan University Health Board, are taken up by Covid patients, doctors warned today. The board said more than half of the infected patients were unvaccinated and it had no plans to cancel treatments. But an ICU doctor in the hospital warned some care ‘will get cancelled if there are no beds’

A further 36 people were admitted to hospitals in Wales on September 3, the latest date figures are available for. Some 164 individuals were admitted to hospital with the virus in a single day at the peak of the second wave on December 31, before falling to a low of one daily Covid admission in late June. But the numbers seeking hospital care due to the virus have been ticking upwards in recent weeks, leading to concern among hospital staff

A total of 331 patients were in hospitals in Wales on September 3, which is the highest number since March 25 when 344 required hospital care

Some 47 patients were in mechanical ventilation beds on September 3, the highest numbers since March 2 when 52 required the beds

A further 2,666 people tested positive for Covid in Wales on September 2, as infection rates reach levels last seen during the second wave in January

An amber status ward is one where there patients who are close-contacts of Covid cases. A red ward contains patients infected with the virus.

Medics have to wear more personal protective equipment (PPE) when in amber or red wards, compared to those that are thought to be green and Covid-free.

And all other patients in the ICU have no contact with them to avoid them being at risk of infection.

It comes as a further 36 people were admitted to hospitals in Wales on September 3, the latest date figures are available.

This brought the total patients in hospital with the virus to 331, which is the highest number since March 25 when 344 required hospital care. Around 14 per cent (47 patients) are on mechanical ventilation beds.

To manage the spread of Covid within hospitals, units are divided into red, amber and green in some hospitals.

Red ares include patients who test positive for Covid and are considered high-risk.

The infected patients in these wards are kept separate from those who have not tested positive.

And staff have to wear more PPE when working in these departments.

Amber units include patients who are close contacts of someone who tested positive, meaning they may have the virus.

Meanwhile, green low-risk areas are made up of patients who have tested negative.

Some 164 individuals were admitted to hospital in a single day at the peak of the second wave in the country, before falling to a low of one daily Covid admission in late June.

But the numbers seeking hospital care due to the virus have been ticking upwards in recent weeks, leading to concern among hospital staff.

Dr Jones tweeted: ‘Frustrating day for ABUHB [Aneurin Bevan Health Board] ITU staff today as we “flipped” the largest part of the unit from amber (non Covid) to red (Covid).

‘Covid patients now make up the majority of our patients on the unit.

‘We’re all pretty gutted that we’re facing this next wave of Covid patients.

‘Vaccination has certainly weakened the link between infections and hospitalisations, but it hasn’t broken it and the unvaccinated are featuring heavily in hospitalised patients.’

She told MailOnline that the situation means there is less space for non-Covid patients, who are a mixture of emergency admissions and elective patients.

Elective operations – such as joint replacements – ‘will get cancelled if there’s no beds’, Dr Jones added.

A spokeswoman for Aneurin Bevan University Health Board told MailOnline it has 40 Covid-positive patients across its hospitals, which reflects ‘the rising number of cases in our communities’.

They said: ‘The number of Covid positive patients being cared for in our Intensive Care Unit (ICU) at the Grange University Hospital is also increasing and we have established a dedicated Covid area within the unit to care for these patients.

‘Most of the patients in our ICU are unvaccinated.

‘Our elective services are continuing in non-Covid areas of our hospitals and Covid positive patients are cared for in well-established separate areas to minimise the risk of the infection spreading.

‘At this time we do not have any plans to suspend any of our services.’ 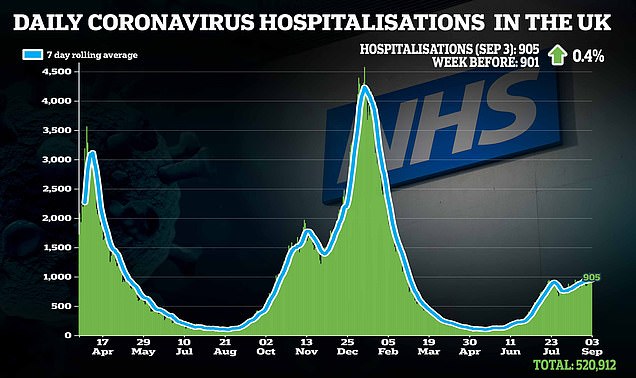 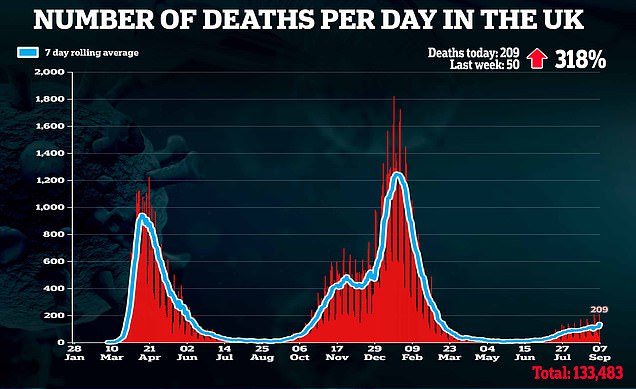 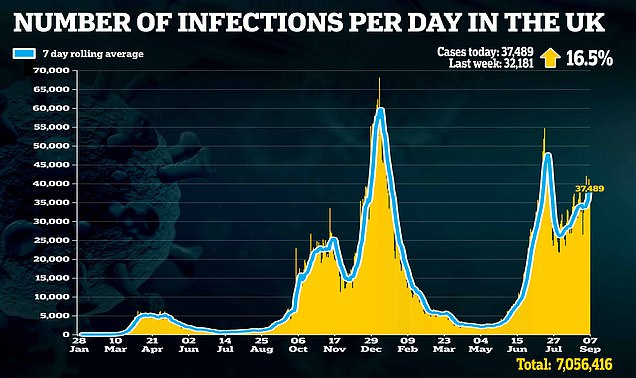 The spokesperson added: ‘We are closely monitoring the situation in our health board area and we have plans in place to meet increased demand where necessary.

‘As ever, the safety of our patients and our staff is our main priority as we continue to operate through this ongoing pandemic.’

Britain’s daily Covid deaths quadruple in a week to 209 and daily hospital admissions surpass 1,000 for the second time in a week

Britain’s daily Covid deaths more than quadrupled in a week today, official figures show — but the rise is likely due to a recording lag from the bank holiday last week.

Health chiefs have registered another 209 Covid fatalities in the past 24 hours, compared to just 50 recorded last Tuesday.

Last week’s number was unusually low and came a day after bank holiday Monday, with death figures typically lower on and around public holidays. For comparison, on the previous two Tuesdays there were 174 and 170 deaths.

Another 37,489 people tested positive for Covid in the past 24 hours, up 16 per cent in a week. The Department of Health also revealed that 1,000 people were hospitalised with the virus across the UK on September 1.

It marked the second time in a week there were four-figure admissions in a single 24-hour period, after 1,019 people were also hospitalised with the virus on August 25.

The DOH update — which often includes backlogged hospital data due to the way it’s recorded — showed there were a further 988 admissions on September 2 and 905 on September 3, which were both week-on-week rises.

The board encouraged people to get vaccinated, wear face coverings when appropriate, maintain social distancing and avoid poorly-ventilated spaces.

It comes as an unnamed source within SAGE, the team of ‘s scientific advisers that advise No10, claimed ministers were mulling over a two-week firebreak lockdown.

The measures would involve extending the October half-term school break from one to two weeks to avoid the NHS being overwhelmed.

But the Prime Minister’s spokesperson said: ‘It is not true that the Government is planning a lockdown or firebreak around the October half-term.

‘We have retained contingency plans as part of responsible planning for a range of scenarios, but these kind of measures would only be reintroduced as a last resort to prevent unsustainable pressure on our NHS.’

Vaccine Minister Nadhim Zahawi told BBC Breakfast this morning he ‘had not seen any plans’ suggesting the Government was planning a firebreak lockdown for next month.

He added: ‘Look, vaccines have given us the ability to reduce infections, to save 100,000 lives.

‘It is through the booster programme that I hope… we can transition the virus from pandemic to endemic status and deal with it year in, year out – it is going to be with us for many years – but not have to close down our economy or take the severe measures we had to sadly take in December of last year.’

Meanwhile, official data showed Covid deaths in England and Wales have climbed to their highest level in five months.

The Office for National Statistics weekly report said 668 people had Covid mentioned on their death certificates in the week ending August 27.

This is the highest weekly total since the week to March 26 — when the second wave was dying down — when there were 719 deaths involving the virus.