‘He won’t turn his back on an opportunity for power’: Nicola Sturgeon says Jeremy Corbyn WILL grant her demand for a new Scots independence referendum so he can get the keys to No10

Nicola Sturgeon today insisted Jeremy Corbyn will bow to her demand for a new Scottish independence referendum – saying he would not ‘turn his back’ on the chance to be PM.

The SNP leader said the Labour leader would prioritise getting into No10 if the election on December 12 results in another hung parliament.

The comments came after Ms Sturgeon ridiculed Mr Corbyn’s wriggling on the issue of when he would permit a new ballot on breaking up the union.

Mr Corbyn has admitted he will not stand in the way of another Scottish independence referendum, but flip-flopped wildly over the timing.

He initially ruled out permitting a vote before 2024 – but then humiliatingly backtracked and suggested one should not happen in the ‘early years’ of a Labour government.

Answering questions at an event in Dundee today, Ms Sturgeon said: ‘I do believe if the Parliamentary arithmetic needs this, then Jeremy Corbyn is not going to turn his back on an opportunity for a UK Labour government just because he is determined to block the right of the Scottish people to choose their own future.’ 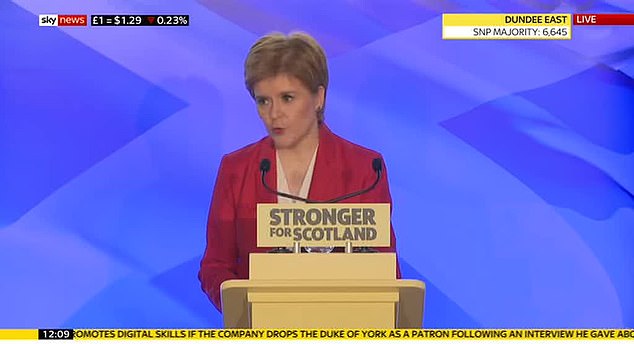 At an event in Dundee today, Nicola Sturgeon said she did not think Jeremy Corbyn would ‘turn his back’ on an opportunity for power

‘Much as I oppose Brexit, and I really oppose Brexit in principle, as well as for all the practical reasons I’ve been talking about, there was nothing inevitable about the mess of the Brexit process,’ she said.

‘That was down to the fact that those who advocated to leave in the referendum didn’t put any detail of what it would mean in practice, the trade-offs, the compromises that would be required to implement that.’

Mr Corbyn was confronted by Boris Johnson over his stance on a Scottish independence during an ITV election debate last night.

Asked to rule out a ballot before the end of the first year of a Labour government, Mr Corbyn said: ‘I’ve said there would be no deal with the SNP, there would be no support for a Scottish referendum in the early years of the next Labour government because I want to invest in Scotland and give Scotland the £70billion it needs in capital investment.’

But Mr Johnson retorted: ‘I listened very carefully as I always do to Mr Corbyn – I didn’t hear him say he was going to rule out a referendum on Scotland. Did you?’

Last night Ms Sturgeon laughed off Mr Corbyn’s suggestion that a referendum should not happen in the ‘early years’ of the next Parliament, rather than her schedule of next year, saying in an interview: ‘I drive a hard bargain.’

‘I have to say, Jeremy Corbyn’s position on this does change almost every day,’ she said.

But she said there was an ‘issue of principle at stake’ that it should be ‘up to the people of Scotland’ to decide its future.

She said she would not prop up the Tories in power, and would make sure the ‘voice of Scotland’ is heard if Labour needs help to form a minority administration. 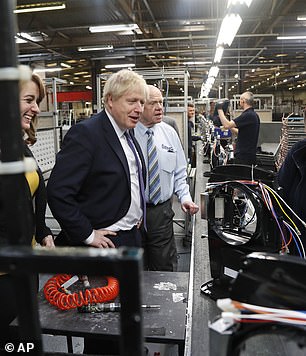 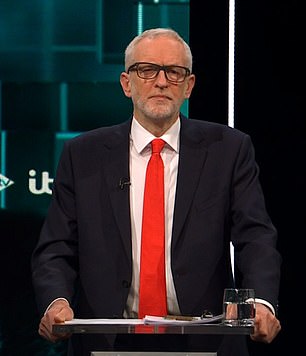