The stew arrives in a jumble: irregular pieces of bone-in goat meat coated with a brilliant fire-engine-red sauce. Thick like a blanket in February, the sauce is a blend of fresh tomatoes, peppers and tomato paste that’s cooked down until nearly burly, just shy of smooth. It clings lazily to the goat, the meat soft from a quick braise, with just enough fat to offset the peppers’ quiet fire.

At Hills Kitchen, a new Nigerian restaurant in Bushwick, Brooklyn, the stew calls for rice. Your choice presents a quandary: A pile of white rice is an efficient vehicle for those strictly interested in mainlining their serving of sauce, but choosing it means forgoing the jollof rice, that mainstay of Nigerian — and much other African — cuisine.

The base for jollof rice is that same tomato-pepper combination, cooked down and married with a heap of rice, holding the grains together like a web. The flavor is somehow brighter and more acidic than the stew’s sauce. Those who want their rice to make them sweat should take advantage of the shaker of powdered Cameroonian pepper on the table, waiting to take any dish up to 11. Bottles of palm wine are kept behind the counter, ready to calm everything down with their glossy, cider-like effervescence. 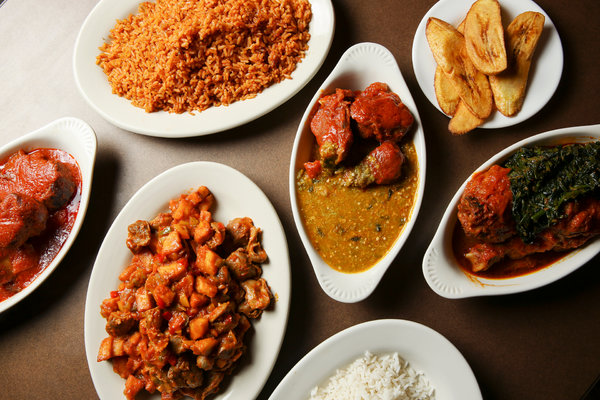 The owner, Hillary Uduh, and his cousin Promise Edoro, who cooks alongside him, opened Hills Kitchen in February, partly because of the surprisingly few Nigerian restaurants in the city. The space is narrow and cozy, with a large front window that faces Maria Hernandez Park across the street.

Mr. Uduh owned a few restaurants in Nigeria before emigrating, but has been cooking since long before that. “Right from childhood, my mom made us cook — the same things I’m cooking today, at the restaurant,” he said. “In my house, everyone had to cook.”

Those dishes are on the menu: jollof rice, of course, and soups, often laden with leafy greens. When ordered as a main course, they come studded with meat or stockfish and are served with a soft, dense ball of pounded yam, amala or wheat — a category of food often referred to, colloquially, as “fufu.” (Mr. Uduh noted that fufu technically refers to the version made with cassava flour, and doesn’t employ the term.) Each comes wrapped tightly in plastic, and doubles as a utensil. The pounded yam is doughy and barely sticky, adhering ever so slightly to your fingers as you scoop up broth-laden bits of greens.

The soups here range from brothy to creamed-spinach-thick, and wield bitterness to varying degree. The lightly tangy okra soup splits the difference between silky and viscous, the vegetable’s seeds and bits of flesh suspended with confetti-like spinach.

Edikang ikong is dense with greens cooked down until they nearly melt: pumpkin leaf, common in Nigerian cooking, and spinach, which Mr. Uduh and Ms. Edoro use as a close substitute for the harder-to-find waterleaf. The dish gets a slight, almost nutty funk from the ground and dried crayfish sprinkled into nearly everything here, along with a cube of Knorr seasoning. The soup’s edges glow red with the trace of fresh chiles.

The bitter leaf soup puts a megaphone to that pungent African green’s brashness. A Nigerian-American friend, when asked about the dish, wrinkled his nose in the specific way many grown children react to the hard-to-love foods of their childhood; Mr. Uduh considers it a specialty.

A bit more gentle is the egusi soup, with a barely spicy broth topped with ground melon seeds, earthy and fluffy and lightly sweet. They soften after sinking into the broth, thickening it with their bulk.

There’s no dessert section on the menu, but tucking into the cakelike moi moi feels like a treat. It’s shaped like a stocky flan, with a body of puréed beans that envelops a whole-boiled egg hiding inside. The beans have a nuttiness that hints of peanuts. I kept going back to it, trying to pinpoint a familiar flavor interspersed with flecks of fresh chile, and ultimately realized all I really wanted was to eat the whole thing.