Trump says Ivanka would be ‘incredible’ as U.N. ambassador but laments he would be accused of ‘nepotism’ if he chose her, amid speculation she could be a likely replacement for Nikki Haley

President Donald Trump said his daughter Ivanka Trump would make a ‘incredible’ Ambassador to the United Nations but he didn’t want to be accused of ‘nepotism’ if he appointed her to the job.

Ivanka Trump was speculated as a possible replacement for outgoing U.N. Ambassador Nikki Haley, who lavished praise on the first daughter and her husband Jared Kushner in the Oval Office Tuesday.

‘I can’t say enough good things about Jared and Ivanka,’ Haley said at the announcement she was leaving her job at the end of the year.

The couple, who serve as advisers to President Trump, were in the Oval Office to hear her glowing words.

But a White House spokesperson declined to comment on the talk Ivanka Trump may replace Haley in the country’s top diplomatic post. 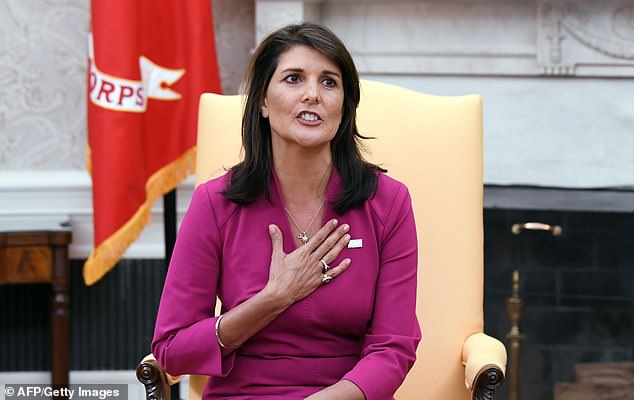 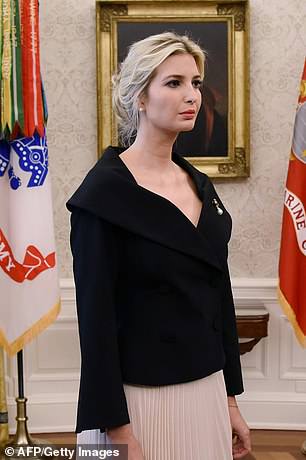 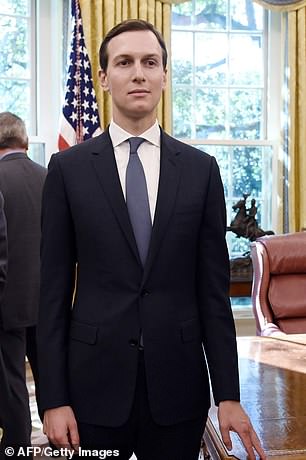 Ivanka Trump and Jared Kushner, who serve as advisers to President Trump, were in the Oval Office to hear Haley’s glowing words 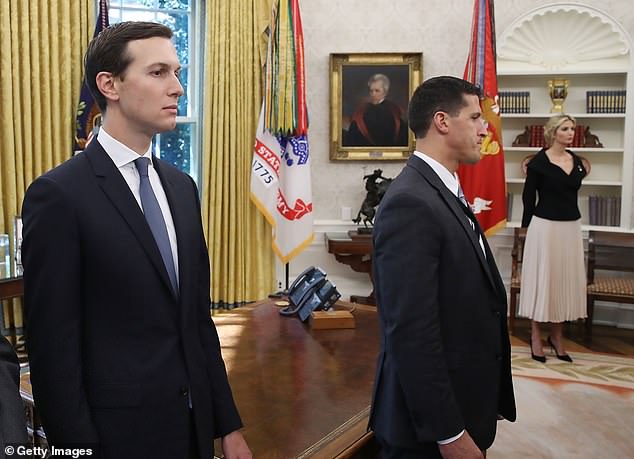 White House Senior Advisors Jared Kushner and Ivanka Trump listen to President Donald Trump announce that he has accepted the resignation of Nikki Haley as U.S. Ambassador to the United Nations

Still Haley’s comments about the two were notable. Jared Kushner and Ivanka Trump were considered two of her biggest allies in the Trump administration.

‘Jared is such a hidden genius that no one understands,’ Haley gushed, citing his work on the renegotiating NAFTA and on various trade deals.

‘Ivanka has just been a great friend,’ Haley added.

She said the couple do more behind the scenes in the Trump administration than people realize although she did not offer specific examples.

‘They do a lot of things behind the scenes that I wish more people knew about because we are a better country because they’re in the administration,’ Haley said.

Ivanka Trump returned the praise in a twitter post with Haley and her husband, adding a picture of the three in the Oval Office.

‘Ambassador Haley has served America with dignity + distinction. She is a bold reformer and has been an unwavering champion of truth, principled realism and integrity within the United Nations. Jared and I are grateful for her friendship — a true blessing in our lives!,’ the first daughter wrote.

Haley’s touting of the two comes as speculation returns that Ivanka Trump could be named to the U.N. job, which Haley will stay in until the end of the year.

CNN reporter Poppy Harlow pointed out that one of Ivanka Trump’s main issues is ‘advocacy around the globe. And particularly when it comes to women’s issues, and it’s something she doesn’t make a lot of headlines for, but it is an area where a lot of her Werk has gone. I do think she may have some interest in a role like this that would truly put her on the world stage and put her focus on some more of the global issues where she may be able to have some success.’

CNN political director Mark Preston said the president was capable of appointing anyone he wanted to the position and noted the couple could want to return to New York, which is where they lived before moving to Washington D.C. after the 2016 election.

‘Does she want to get back to New York?,’ he said. ‘There’s been talk about how her and her husband would like to get back to New York. That could get them back to new York. I would argue this. I think she’s in such a powerful position being right next to the president that I don’t know why anybody would want that position if she was really looking for power.’

‘It’s not just the president I want to thank – the family in general. The first lady has been nothing but very kind to me. I can’t say enough good things about Jared and Ivanka.  Jared is such a hidden genius that no one understands. To redo the NAFTA deal the way he did. What I’ve done working with him on the Middle East peace plan is so unbelievably well done. Ivanka has been a great friend and they do a lot of things behind the scenes that I wish more people knew about because we’re a better country because they’re in this administration.’

Ivanka Trump was with Haley and herfather at the U.N. General Assembly meeting in New York City at the end of September where she sat in on some of the president’s meetings with world leaders and led a few briefs of her own.

She delivered an anti-human trafficking speech during her time there, calling it “the greatest human rights issue of our time.”

“This is a call for action, a call for global unity,” Ivanka Trump said at a panel hosted by Great Britain and Northern Ireland, noting that her father has said he is “prepared to bring the full force and weight of our government” to combat human trafficking.

It’s not the first time the first daughter has been mentioned as Haley’s replacement – Cabinet-level position that requires confirmation by the Senate.

In November of last year, The New York Times reported there was talk in the White House that Ivanka Trump could replace Haley as ambassador to the United Nations if Haley replaced Secretary of State Rex Tillerson.

But Tillerson was replaced by CIA Director Mike Pompeo. 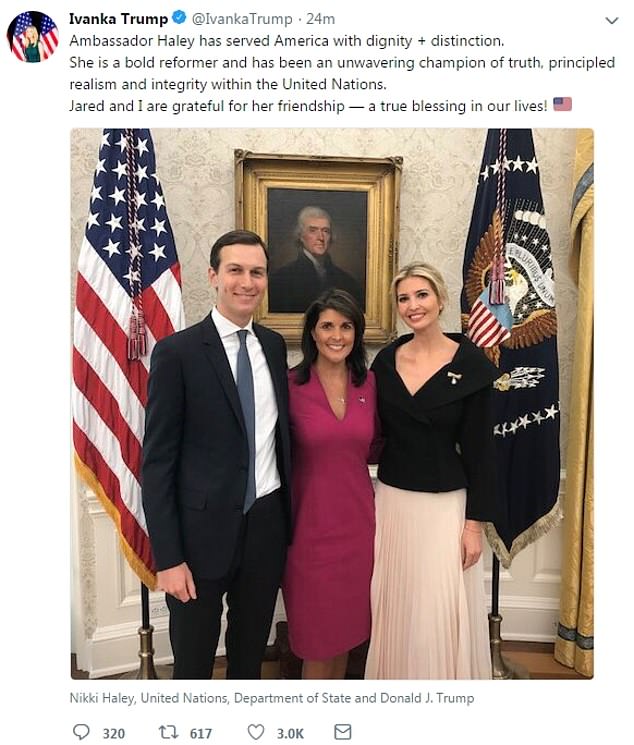 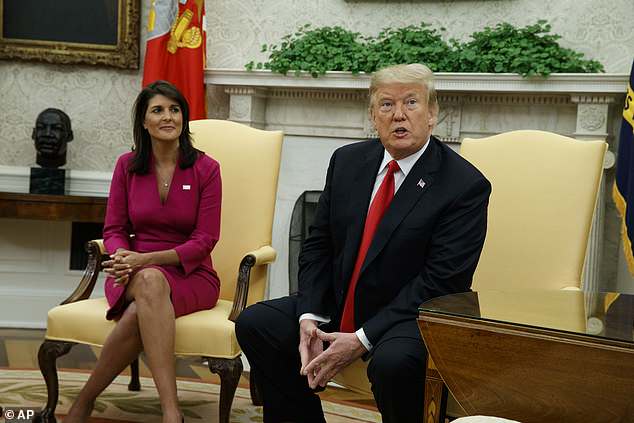 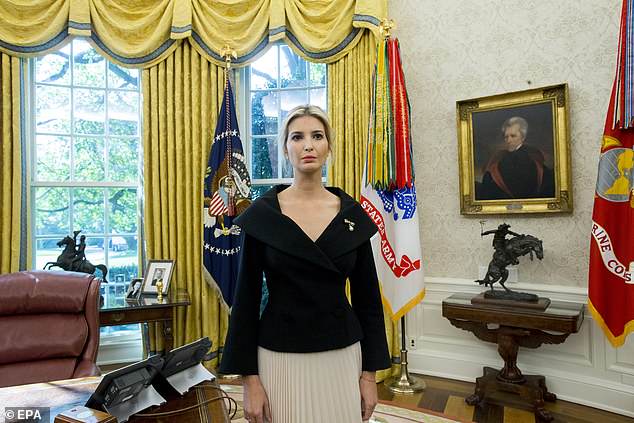 There was speculation last year Ivanka Trump could be named U.N. ambassador 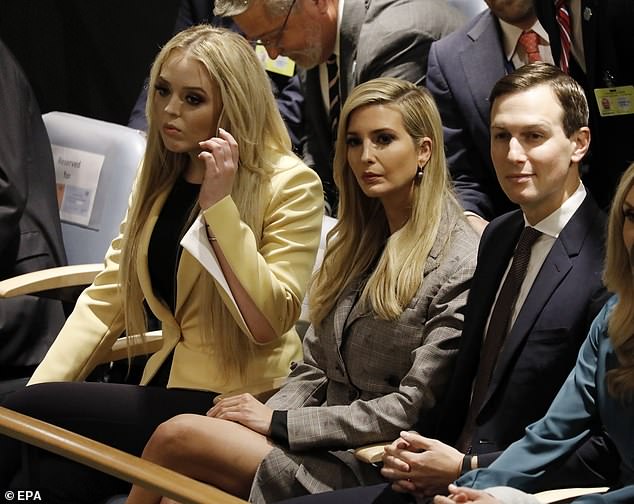 Ivanka Trump was at the U.N. General Assembly meeting with her husband Jared and half-sister Tiffany 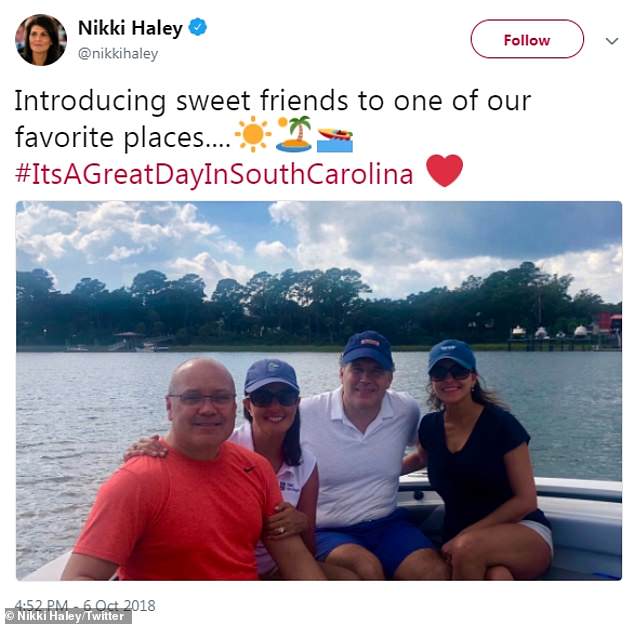 Haley was in South Carolina over the weekend and tweeted this photo of her with former deputy national security adviser Dina Powell, sparking speculation Powell could get her job 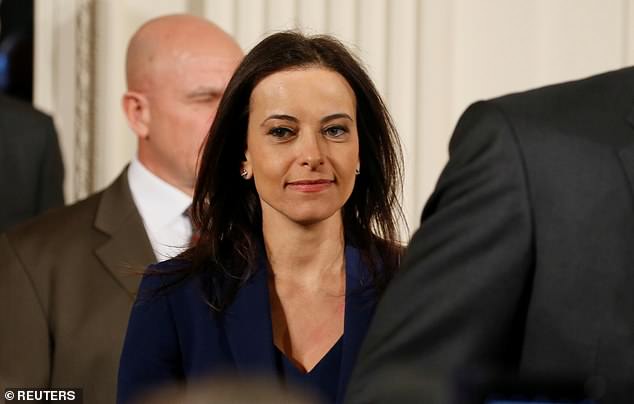 President Trump said ‘a number of people’ would want the job and noted:  ‘It’s become a more glamorous position than it was two years.’

‘I can almost say many people who want to do it,’ he added.

He said he expects to name Haley’s successor by the end of the month.

‘Within the next two or three weeks, maybe sooner,’ Trump said.

Should Ivanka Trump be named to the position, the White House would have to move fast on her confirmation process if Democrats win control of the upper chamber in the November midterm.

But no matter which party controls the Senate, she would have to fill out extensive Senate disclosure forms on her and husband’s finances.

Another name being floated as a Haley replacement is Dina Powell, who worked with Ivanka Trump on women’s economic empowerment issues and later became deputy national security adviser before she left the White House earlier this year.

She is very close to the first daughter.

Haley spent the weekend in her home state of South Carolina and Powell was with her according to a photo Haley tweeted.