Chilling video has emerged showing the suspected gunman who killed 17 people and wounded 17 more at a Florida high school in February bragging about his plans to carry out the massacre.

‘When you see me on the news you’ll know who I am,’ Nikolas Cruz says while laughing creepily in three separate clips recorded on his cell phone.

The video clips were released by Florida prosecutors, according to the Miami Herald. 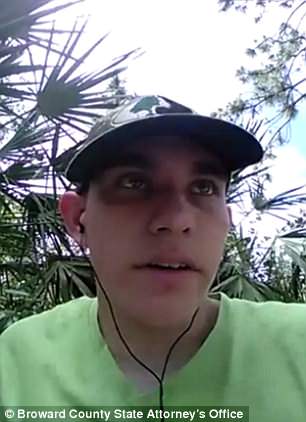 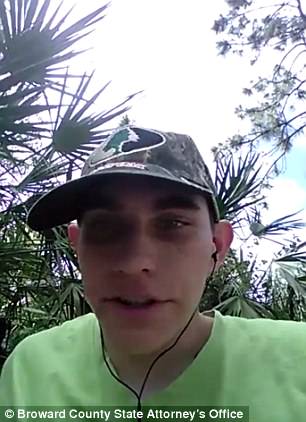 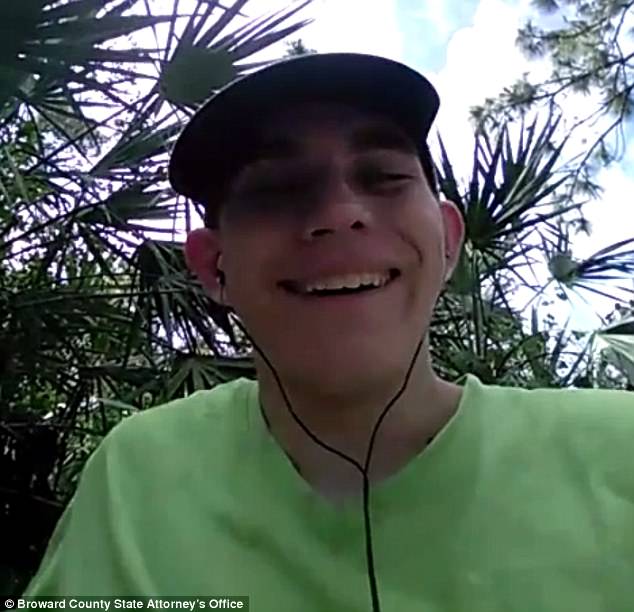 ‘When you see me on the news you’ll know who I am,’ Nikolas Cruz says while laughing creepily in three separate clips recorded on his cell phone 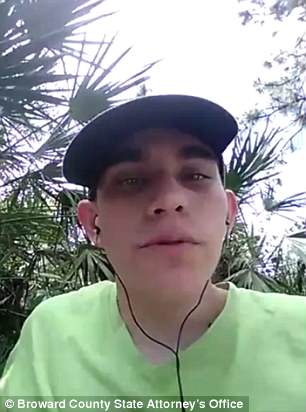 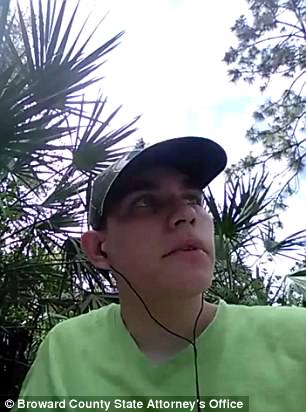 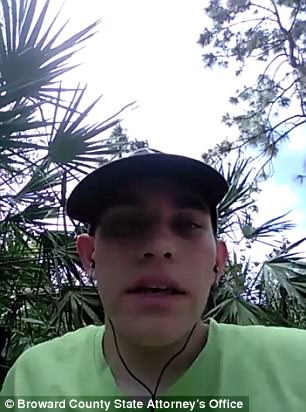 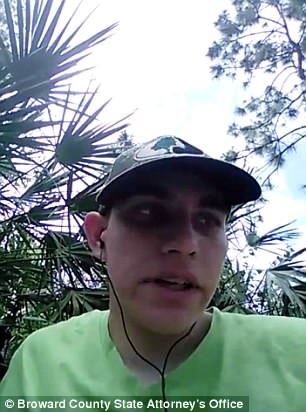 Authorities are seeking a conviction for first-degree murder, which is a capital crime

‘My goal is at least 20 people with an AR-15. … Location is Stoneman Douglas in Parkland, Florida. 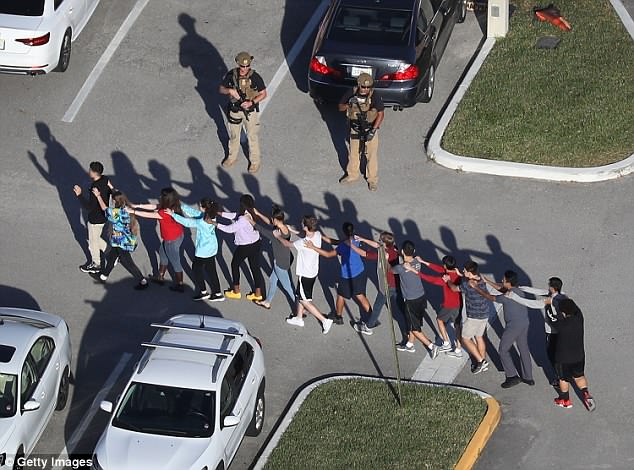 Two of the videos were apparently recorded on February 14 – the day of the shootings at Marjory Stoneman Douglas High School in Parkland (above). It is unclear when the third video was recorded 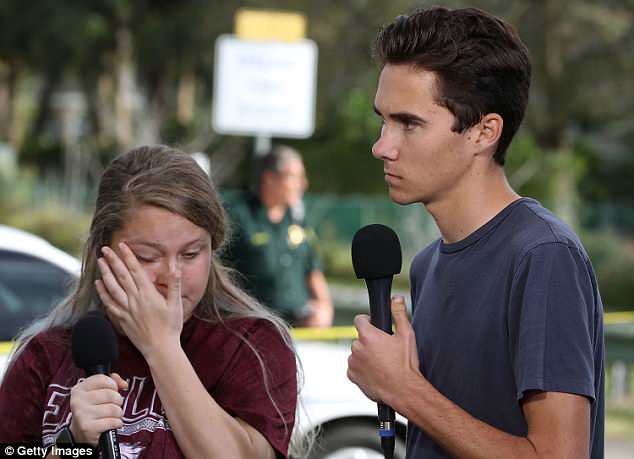 ‘You’re all going to die,’ he says before making gunshot sounds.

In another video, he says: ‘Today is the day. The day that it all begins. The day of my massacre shall begin.

‘All the kids in school will run in fear and hide. From the wrath of my power they will know who I am.’

Cruz then appears to offer a glimpse into a possible motive.

‘In real life, you’re all the dumb***. You’re all stupid and brainwashed.’

He then mentions a girl by the name of ‘Angie,’ though it is not clear whom he was referring to. Cruz says he will always love her.

‘I hope to see you in the afterlife,’ he says.

Florida prosecutors say that the video boosts their case that Cruz carried out the shootings in a premeditated fashion.

Authorities are seeking a conviction for first-degree murder, which is a capital crime.

If convicted, Cruz could face the death penalty.

Two of the videos were apparently recorded on February 14 – the day of the shootings at Marjory Stoneman Douglas High School in Parkland.

It is unclear when the third video was recorded, the South Florida Sun Sentinel reported.

The video was released by Broward State Attorney’s Office after the defense requested discovery, which is the evidence being gathered by the prosecution.

Cruz’s lawyer, a public defender, said that he intends to plead guilty in hopes of avoiding the death penalty.

Police say Cruz confessed to the crime after his arrest about an hour after the shooting took place.

How were at least 16 warning signs missed for Nikolas Cruz?

1. ‘I’m going to be a professional school shooter’

Nikolas Cruz left a comment on a YouTube video back in September using his own name that simply read: ‘I’m going to be a professional school shooter’

2. FBI was warned about the comment but couldn’t identify him

Vlogger Ben Bennight alerted the FBI to the comment shared by Cruz. The FBI was quick to respond, arriving at his office the next day but only after Bennight called a local field agent, revealing his initial attempts to send in a screengrab of the comment failed when the email address he found listed on the agency’s website came back with a domain error saying it did not exist. The FBI was unable to identify the person who posted the comment.

After Cruz’s mother died, he eventually moved in the the family of a former classmate, where he brought his AR-15 which was kept in a locked cabinet that he had the key to. He was able to purchase the rifle in the past year and passed a required background check. Federal law allowed people 18 and over to legally purchase long guns. At 21, people can legally buy handguns from a license dealer. Cruz was also studying marksmanship in the Army Junior Reserve Officers’ Training Corps.

Cruz’s Instagram page is filled with disturbing posts of what appears to be himself showing off with weapons with his face covered, asking for advice on buying firearms, and making racist comments about Muslims.

5. Was a member of a white nationalist group and came to training exercises

Jordan Jereb claims that Cruz was a member of the Republic of Florida, which aims to make Florida its own white-entho state. Jereb claimed Cruz, who was adopted, was brought up in the organization by another member and he reportedly carpooled to at least two training exercises held by the group.

Students who say they knew Cruz claimed he liked to kill animals.

‘He was crazy because he liked to kill small things, like little animals – frogs and other animals like that and he just had a crazy mind,’ one told 10ABC news.

Another classmate claims he would tell him he shot rats with a BB gun.

7. Took knives and bullets to school

Former classmate Joshua Charo, 16, said all he ‘would talk about is guns, knives and hunting’.

Another student said he started selling knives out of a lunchbox when he started high school, while he was also found to be carrying bullet casings in his bag.

8. Was banned from carrying a backpack

Jim Gard, a math teacher, who had Cruz in his class last year, said he believes the school sent out an email warning teachers he shouldn’t be allowed on campus with a backpack.

‘There were problems with him last year threatening students and I guess he was asked to leave campus’.

The deeply troubled ‘loner’ was expelled last year for ‘fighting over his ex-girlfriend’ with her new boyfriend.

10. Abusive to his ex-girlfriend

Students claim the gunman was abusive to his girlfriend

Mr Gard also claimed that he was taken with another student ‘to the point of stalking her’, while another student who claims to have been friends with Cruz said he had to cut him off because he started ‘going after’ and ‘threatening’ a female friend of his.

Neighbor Christine Rosburgh said she, and all the other neighbors, were terrified of the teen who would bang his head against a cement wall if his legal guardians tried to send him to school.

She also claims she caught him peeking in her window and when she confronted him, he said he was looking for golf balls.

Cruz had been getting treatment at a mental health clinic, but stopped about a year ago and dropped off the radar. He was showing signs of depression.

Broward County Mayor Beam Furr said: ‘It wasn’t like there wasn’t concern for him. We try to keep out eyes out on those kids who aren’t connected… In this case, we didn’t find a way to connect with this kid.’

Natalie Brassard, a program director at the non-profit FASCETS, which works with FASD children, said some of Cruz’s characteristics ‘suggest that he might have been living with an invisible brain-based condition – it could have been FASD or many others.’

Conditions of FASD can range from mild to severe but can include learning disabilities, intellectual disability or low IQ, poor reasoning and judgment and a host of other issues.

Cruz’s adoptive mother, Lynda Cruz, 68, died of pneumonia in November last year. She was one of the only people that was remotely close to Cruz. His adoptive father Roger Cruz died of a heart attack several years ago.

After his mother died, he and his brother were left in the care of family friend Barbara Kumbatovich, of Long Island, New York.

He is believed to have lived for a few weeks at the Lantana Cascade mobile-home neighborhood with a different family friend before moving in with a former classmate’s family in Parkland around Thanksgiving.

Cruz was investigated by state authorities in 2016 after he filmed himself cutting his own arms on Snapchat and saying he wanted to buy a gun.

He posted the video on the social media app in September 2016, 17 months before he allegedly committed the school shooting.

He posted the Snapchat clip just days after turning 18 year of age and shortly after he broke up with his girlfriend ‘who was cheating on him,’ his mother told investigators.

Cruz is seen in the video talking about his plan, which was to take an Uber to the school and then climb up to the third floor.

From there, he would pick off students in the courtyard.

That is not the plan that materialized. While Cruz did take an Uber to the school, he did not wait until reaching the third floor before he started shooting.

The father of one of the victims said he read the transcripts of the videos, but he chose not to watch them.

‘I already know what he did,’ said Fred Guttenberg, whose daughter, Jaime, was killed in the shooting.

‘He’s evil. Repulsive. He deserves to be dead… He talked about how he was going to be someone now.

‘It’s a level of thought that I can’t comprehend. It looks, from the words, like the kid had joy. 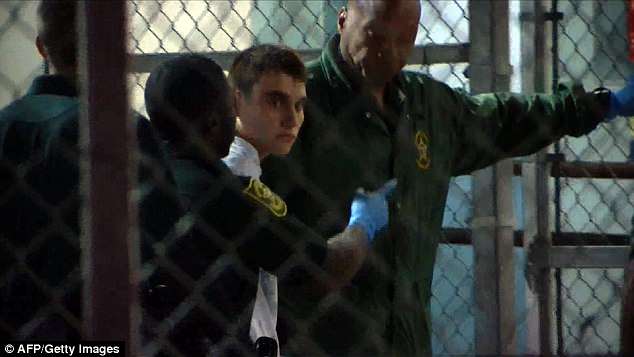 Cruz is seen above being taken into custody on February 15, 2018 at Broward County Jail in Fort Lauderdale

‘I don’t want to see the delight he took in planning the murders of our children.’

The shootings in Parkland sparked a nationwide debate about gun laws, particularly after it was learned that Cruz used an AR-15 assault rifle that he legally obtained.

Authorities are also wrestling with questions surrounding how the warning signs that Cruz would do harm to others were apparently missed.

Officials were so concerned about Cruz’s mental stability that they decided he should be forcibly committed.

But the recommendation was never acted upon.

A commitment under the law would have made it more difficult if not impossible for Cruz to obtain a gun legally.

But more than a year earlier, documents in the criminal case against Nikolas Cruz and obtained by The Associated Press show school officials and a sheriff’s deputy recommended in September 2016 that Cruz be involuntarily committed for a mental evaluation.

The documents, which are part of Cruz’s criminal case in the shooting, show that he had written the word ‘kill’ in a notebook, told a classmate that he wanted to buy a gun and use it, and had cut his arm supposedly in anger because he had broken up with a girlfriend.

He also told another student he had drunk gasoline and was throwing up.

Calls had even been made to the FBI about the possibility of Cruz using a gun at school.