No charges will be laid against the operators of a backyard slaughterhouse at Koo Wee Rup after the Department of Agriculture closed its investigation into reports of cruelty and biohazard breaches.

Footage of sheep being butchered in a garage on the outskirts of Melbourne surfaced last month, sparking complaints from animal welfare advocates.

The footage showed four people and animals, including rats and kittens, coming and going from the makeshift slaughterhouse floor as one sheep appears to take more than five minutes to die, thrashing its tethered legs as it lay on its back in a metal cradle without first being stunned. 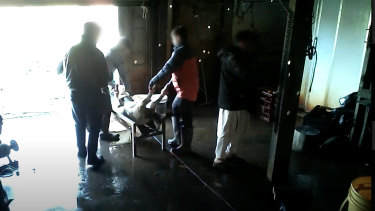 The animal's head hangs over a plastic bucket, then the carcass is hung from the ceiling and butchered as a young child runs past.

The Department of Agriculture has refused to reveal whether it visited the property or conducted raids on the premises but said it was no longer investigating the matter.

“Agriculture Victoria has investigated the complaint which included inspecting a property in Koo Wee Rup," the spokeswoman said.

“The investigation has now been closed.”

The property at Koo Wee Rup, 63 kilometres south-east of Melbourne, was the subject of complaints to the Agricultural Department in July last year but animal welfare advocates told The Age it had continued to operate.

The Victorian Meat Industry Act prohibits the slaughter of livestock other than at an abattoir to produce meat for sale, but does allow farmers to slaughter their own livestock on their farm for private consumption at home. Meat from these animals is not permitted to be sold or to leave the property, according to the state's meat safety regulator PrimeSafe.

Animals must be stunned, rendering them unconscious, before being killed.

At the time, Animal Justice Party MP Andy Meddick, who made an initial complaint about the property in 2019, feared an increased demand for the illegal underground meat trade was occurring with industry abattoirs facing tight restrictions and partial shutdown orders due to COVID-19 lockdown measures.

Of the state's highest COVID-19 clusters, a large number were from the meat industry.

On Sunday, Mr Meddick said it was outrageous the government was "unable or unwilling to investigate" this type of behaviour when exposed by undercover activists.

"They say that the evidence is inadmissible. It is outrageous that a loophole in the law allows illegal slaughterhouses to operate in a cruel and unsanitary manner without fear of prosecution – yet exposes the people who film it to criminal charges," Mr Meddick said.

The footage was captured by the Farm Transparency Project.