It’s Friday afternoon in the inner north, so it’s time to go to the playground. After all, there’s nothing else to do. The park is full of crazy kids, dogs running wild and surreptitious knots of teenagers pretending they’re socially distancing. This is the regular late afternoon scene in my neighbourhood, and probably in yours. 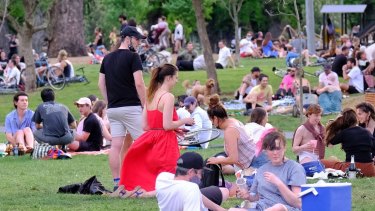 People relaxing at the Edinburgh Gardens in Fitzroy.Credit:Luis Enrique Ascui

Once upon a time we had so many other options: pubs, beaches, barbecues. March changed all that in a flash. As we gradually re-emerge (let it be for good this time!) I wonder what habits we’ll keep from this time, apart from an obsession with washing our hands.

The impact of lost jobs and the awful toll in lives matters most, of course. But for luckier people, lost rituals loomed large. Not being able to drop by a favourite cafe; shopping at a new greengrocer that’s in our zone; missing out on choir practice or the after-work gym session. These small changes were discombobulating in surprising ways.

Freedom is not about taking every option. It’s about choice, and sometimes we choose to be anchored by routine and familiarity. Not needing to think about every single thing we do is a kind of freedom in itself.

Our daily habits define us. We manage the river of time by carving out paths for it to flow in, like children at the beach digging channels for the sea. Lockdown was a freak wave, washing everything away.

Now, we can fall back into the old grooves, or carve out new ones. Habits can be acquired by choice and effort, plugging away at new ways of doing things until they’re automatic.

Self-help book pioneer Maxwell Maltz, of Pyscho-Cybernetics fame, even put a time frame on it: 21 days "to effect any perceptible change in a mental (self) image".

Since Maltz (who was a plastic surgeon) made his pronouncement, some actual behavioural scientists have tried to pin down what makes a good habit stick, and what helps us lose a bad one.

It turns out a habit actually takes at least 66 days to form, and that to lock it in, you need a lot of help and motivation. There’s a joke about how many social workers it takes to change a light bulb: only one, but the light bulb has to want to change. Oddly, the idea of people being forcibly prevented from accessing their pokies venue by a microscopic virus did not occur to the researchers.

No one likes forced change, but it might be good for us.

When some of the London Underground was closed during a strike in 2014, commuters had to find new routes across the complicated public transport network. Afterwards, about one in 20 stuck with their new and better routes. Research found that the time they saved outweighed all the time lost across London during the strike. The strike did what people wouldn’t do for themselves: it made them try a different way.

In fact, when Melbourne consumer research firm Nature surveyed 1000 people last month on their post-lockdown plans, a bunch of us said we wanted things go back to exactly how they were before.

If you want to recreate your former life, complete with excessive alcohol consumption, questionable hook-ups or even a compulsion to over-exercise (hello MAMILs of Beach Road), that’s fine with me. The last thing we need is to be told to use this crisis as an opportunity.

Still, some people, annoyingly, saw an opportunity to improve their lives, according to the Nature research. They wanted to live better, or more simply – to wipe the slate clean.

A million years in lockdown will help with that too. As one habit researcher wrote: “An appealing solution to breaking a habit is to remove the person from any environment which cues unwanted habitual responses.”

I have not taken up home yoga while working and co-teaching my year 1 kid. I may be walking the kid on Fridays instead of heading to the pub, but I’m also demolishing half a block of chocolate every afternoon, like clockwork.

We are not the Bionic Man, being rebuilt after his crash (“Better than he was before. Better … stronger … faster”).

But we are reconstructing ourselves, like grandfather’s axe: the same, but different.

Jenny Sinclair is a Melbourne writer.