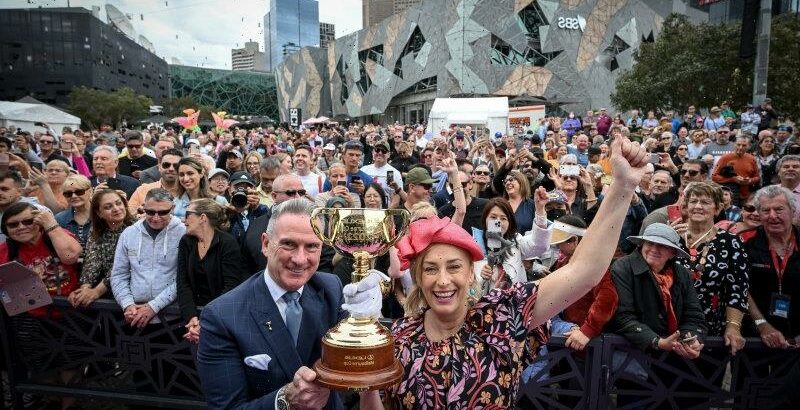 Karen Dryden is going to her first Melbourne Cup on Tuesday, and she doesn’t care if it rains.

As a warm-up to the main event, Dryden, 66, and her son and grandson had a fun day out on Monday watching the Melbourne Cup parade, dubbed a “cavalcade”, on their first visit to the city. 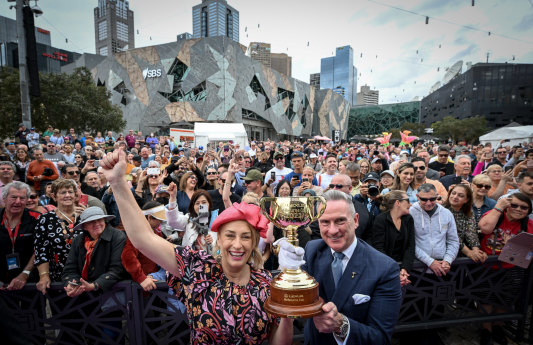 Warm was the word: It was a balmy 21 degrees as several thousand people, many from interstate, lined the short route from Hamer Hall and across Princes Bridge to Federation Square.

But the rain at least held off for the first Cup parade since 2019.

The forecast is for rain and possible thunderstorms at the Flemington racecourse on Tuesday, but Dryden, from Gosford in north Sydney, is excited about going and “couldn’t care less” if it’s a bit wet.

“We’ve bought disposable raincoats,” she said. “There’s no point worrying about the weather. You can’t control it so just enjoy it.” 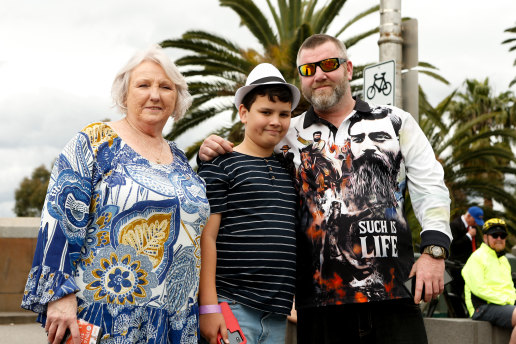 Capp said it was a joy to see crowds back in the city. She said the Spring Racing Carnival was about “coming together with friends and family to have a good time”.

Spectator Angela Woods, 67, a retired nurse from Albury, will attend the Cup for the second time, but this time “from the posh end, not the back end”. 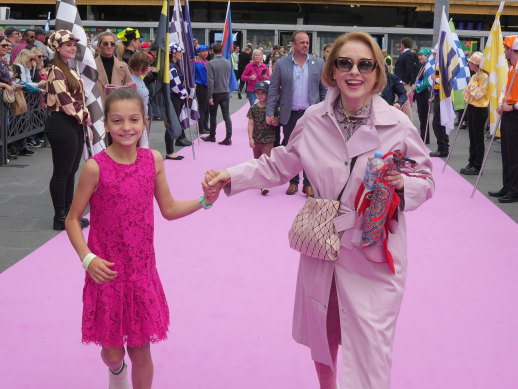 In 1976, Woods was a strapper for the colt Current Issue, which came 17th out of 23 starters in the Cup.

“He led for about three-quarters of the race, going flat-chat, then he just stopped in his tracks,” she said, adding it was a “very exciting” day.

Friends Rae Barrett-Foye, 80, and Lorraine Dorin, from Wollongong in NSW, came to Melbourne on a P&O cruise. It will be Dorin’s first live Cup, and she said that if it rains, “I’ll wear a raincoat and bring an umbrella. It won’t stop us.”

Barrett-Foye’s tip to win the Cup is Irish gelding Camorra, because friends had seen a fortune-teller who tipped “race 7 number 7”. 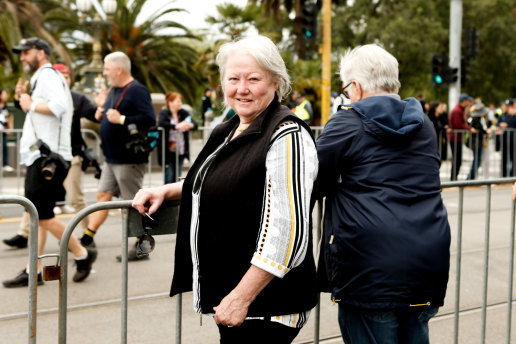 Parade spectator Angela Woods, who was a strapper for a horse in the 1976 Melbourne Cup.Credit:Esther Linder

Members of the group Coalition for the Protection of Racehorses staged a loud protest beside the parade, holding placards saying “Nup to the Cup” and “Horse racing kills”.

Protest leader Elio Celotto read out names of over 130 horses he said had died on Australian racetracks in the past year.

Celotto said racehorses “are forced to compete”, are whipped and the industry “doesn’t have a retirement plan for them” when they out finish racing and so many are sent to the knackers.

In a speech at Federation Square after the parade, Victoria Racing Club chairman Neil Wilson tipped two Danny O’Brien-trained horses – Young Werther and Vow and Declare – to come first and second in the Cup.

Wilson expects a crowd of 80,000 at Flemington racecourse on Tuesday.

Gai Waterhouse, who trained the 2013 Cup winner Fiorente, said it felt “lovely” to have two 2022 chances running – Hoo Ya Mal and Knights Order – and both were “ready to rock and roll”.

Waterhouse, flanked by granddaughters Sophia and Grace, said the parade was fantastic and it “embraces all age groups and nationalities”.