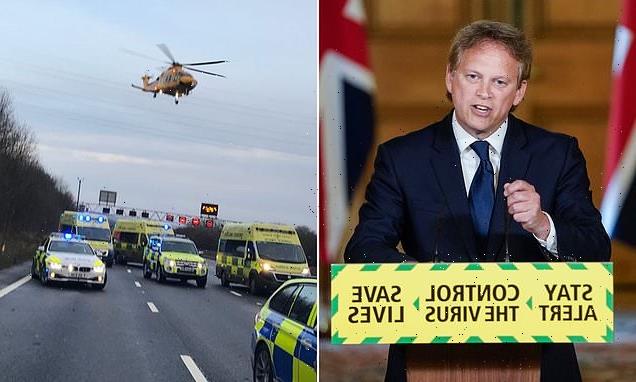 So-called smart motorways cause major issues for emergency services when the hard shoulder is closed off, according to Highways England documents.

Files containing communication logs have revealed how staff from the company had to assist an ambulance in reaching a dying motorist after the hard shoulder was converted into a fourth lane.

The documents, obtained under a Freedom of Information Act request by The Telegraph also shows how Highways England staff had to step in and ‘hand stop’ traffic to clear a path for the ambulance. 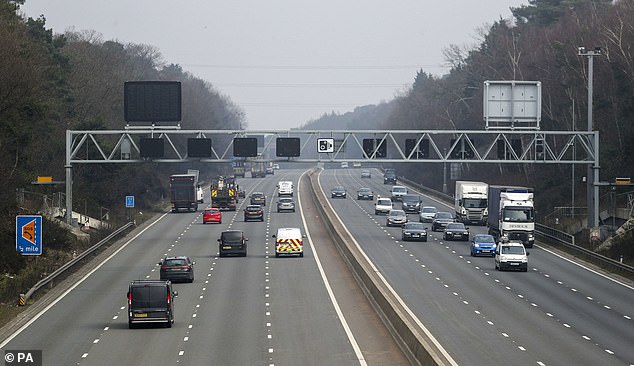 Newly-obtained documents show that so-called smart motorways, with no hard shoulder, have caused chaos for emergency services when trying to reach people in need (stock image)

Jacobs had been forced to stop to repair his van after being unable to reach an emergency refuge spot and killed as he attempted to work on the van.

He was pronounced dead at the scene by paramedics, an hour after the crash took place.

Three other people, including Scripps, were taken to Sheffield Northern General Hospital.

Scripps, who had been a passenger in one of the cars involved in the incident, died seven weeks later.

The incident, back in 2019, was initially reported to Highways England around 1pm, but communication logs show the company didn’t close a carriageway despite requests to do so to allow an air ambulance to land at the scene. 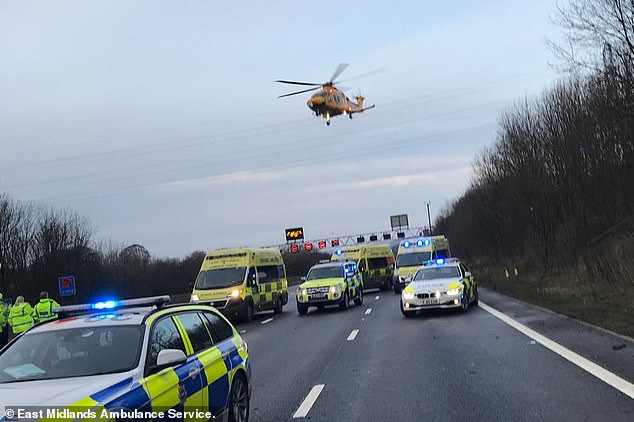 The files focus on an incident involving the deaths of Derek Jacobs, 83, and Charles Scripps, 78, who died as a result of a car accident on March 22, 2019, on the M1. Pictured: The air ambulance is seen attempting to land at the scene of the crash, in 2019

The air ambulance crew were forced to land on an adjacent field before making their way to the crash site.

The documents also showed that Highways England staff were caught up in ‘trapped traffic’ and so found difficulties in navigating the four lanes.

Highways England did not say if there had been a fault with their signalling system at the time of the incident but a spokesperson for the company offered sympathies to the friends and families of Jacobs and Scripps.

They added: ‘We worked closely with the emergency services as part of a multi-agency response into the tragic and complex incident which took place on March 22 2019.’

With police still investigating the incident, the spokesperson said it would be inappropriate to provide comment on any further details. 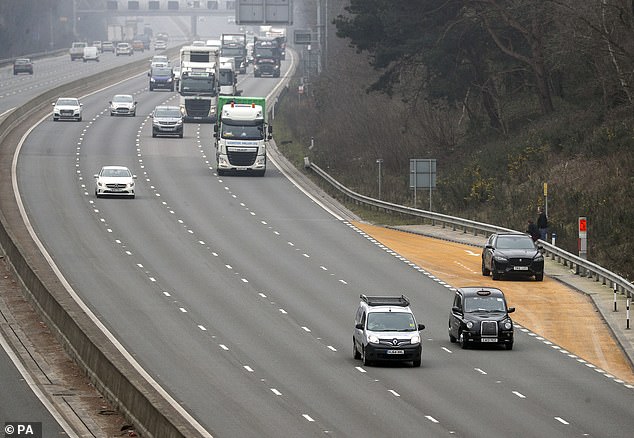 Jacobs’ widow Sally, 83, has slammed Highways England for pushing on with their so-called smart motorways project and claims her husband would still be alive if the hard shoulder had been available to him.

She told the paper: ‘If you kill someone accidentally it’s manslaughter. But they know what is happening, so deaths on smart motorways should now be viewed as murder.

‘They won’t listen. I can’t bring my beloved Derek back, but I can try to stop this happening to other people.’

A spokesperson for East Midlands Ambulance Service said that their staff are trained to deal with work under all types of road conditions.

They added that they continue to work alongside Highways England to ensure their crews can use restricted access routes on the M1 when responding to emergencies. 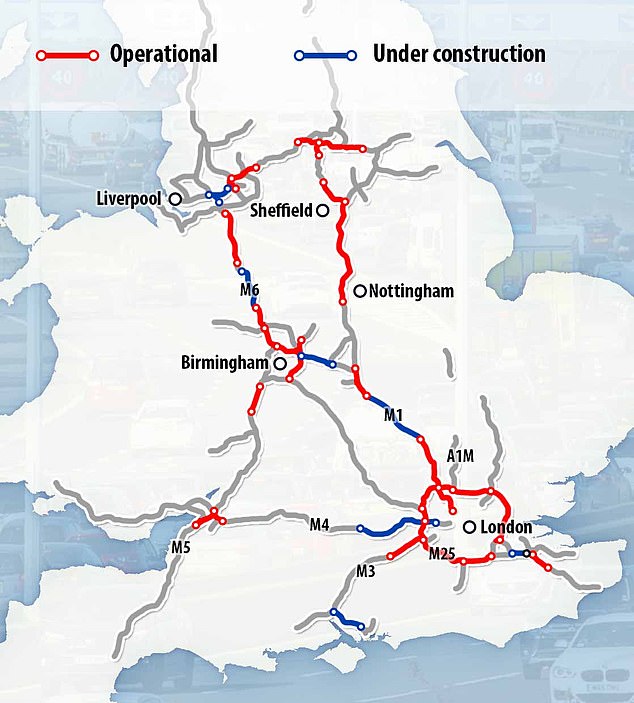 It comes only weeks after an announcement that crash statistics on so-called smart motorways are to be analysed by the roads regulator amid safety concerns.

Transport Secretary Grant Shapps has commissioned the Office of Rail and Road (ORR) to carry out an independent review of safety data despite insisting the roads are safe.

He has also ordered his officials to continue their work with Highways England – the Government-owned company responsible for England’s motorways and major A roads – on ‘developing possible future options’ for reducing accidents on smart motorways.

The design of all lane running (ALR) smart motorways, which involve the hard shoulder being converted into a running lane, has led to safety concerns following fatal incidents involving stationary vehicles being hit from behind.

In a written statement to Parliament, Mr Shapps said: ‘While the evidence has suggested that ALR motorways are in most ways as safe as, or safer than, conventional ones, I am determined to go further and ensure that they are the safest roads in Britain.’ 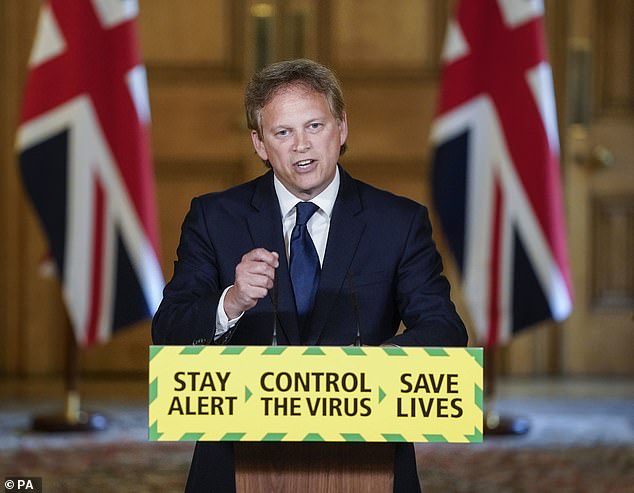 Smart motorways have claimed at least 38 lives over five years: Here’s what you need to know

What is a smart motorway?

Smart motorways involve a range of methods to manage traffic flow, most controversially using the hard shoulder as a live running lane.

Refuges where drivers can stop are placed every mile or so. Variable speed limits are also used.

How many are there?

Motorways with sections where the hard shoulder has been removed include the M1, M4, M5, M6, M25 and M62. The smart network stretches to around 500 miles in England, with an additional 300 miles planned by 2025.

What are the benefits?

Smart motorways are designed to increase capacity without the more disruptive and costly process of widening carriageways.

But are they safe?

Concerns have been raised about incidents where stopped vehicles are hit from behind. Highways England has insisted smart motorways are ‘at least as safe as, or safer than, the conventional motorways they replaced’.

But a survey of drivers by the RAC found 70 per cent felt removing the hard shoulder on motorways compromised safety.

How many have died?

BBC Panorama in January last year found that at least 38 people had died on stretches of smart motorways over the previous five years.

What do officials say?

An ‘evidence stocktake’ published by Transport Secretary Grant Shapps last March stated that the risk of a collision between moving vehicles is lower on smart motorways than conventional motorways.

But the chance of a crash involving a moving vehicle and a stationary vehicle was found to be higher when the hard shoulder was removed.

An 18-point action plan included more refuges for emergencies and faster rollout of a radar-based system to spot stranded vehicles.

Are smart motorways used in other European countries?

The vast majority of motorway-style roads in Europe have a permanent emergency lane.