A North Carolina Town Hall has refused to take down Black Lives Matter flags even as early-voting is under way, according to reports.

The town of Carrboro rejected the state elections director’s request to remove the flag after an emergency meeting Thursday morning to discuss the matter, according to the News Observer.

“This is really important,” Mayor Lydia Lavelle said on the video conference call before closing the meeting to the public.

Later Thursday afternoon, town spokesperson Catherine Lazorko confirmed the meeting was about the flags — and that they’re staying up. 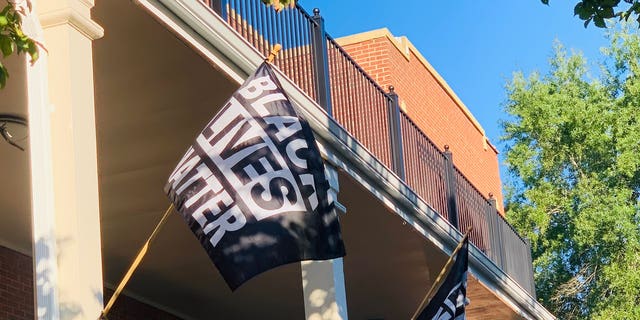 “After consulting with the town attorney, the Mayor and Town Council have chosen to leave the flags in place,” Lazorko wrote in an email.

In July, the town approved the flags "supporting Black Lives Matter along with gel lights" on the Town Hall, ABC 11 reported.

The flags have remained in place since then, but residents have taken issue with the flags now that the election is underway.

State Board of Elections Executive Director Karen Brinson Bell sent a letter to the mayor, that explained the board had received "emailed complaints" about the voting site.

"After receiving word today from the General Counsel for the Republican Party that there were numerous additional complaints, we feel we must formally request you remove these flags for the duration of the early voting period, which concludes in three days on Saturday, October 31, 2020," the letter read.

Carrboro Town Council did not immediately respond to a request for comment.

According to copies of the complaints, the residents claimed that the flags "represent the views of one party" or that the "political" flags represented "voter intimidation at its finest."

Waddy Davis, chairman of the Orange County Republican Party, said that he had received as many as 18 written complaints and many more by word of mouth.

“It’s not welcoming to a lot of people, to my side,” he said. “Black lives matter, of course. Every life matters. Your life matters.”