Seoul’s Joint Chiefs of Staff (JCS) revealed multiple kinds of projectiles were fired from the eastern coastal town of Sondok before rising up to 30 miles today.

The missiles come just two days after the Korean peninsula threatened to take ‘momentous’ action in protest against outside condemnation over its live-fire exercises.

It is the second set of weapons testing by Pyongyang in the last 10 days, following a four-month break. 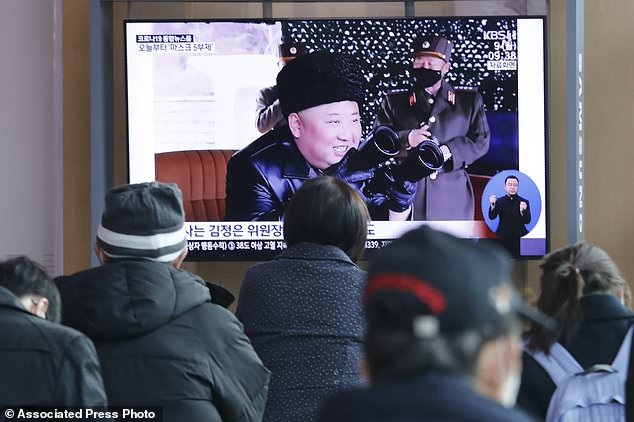 A JCS statement said South Korea felt ‘strong regret’ over the launches because they violated a 2018 inter-Korean agreement which aimed to lower military tensions.

They held an emergency video conference to discuss the missiles’ launch.

He added that the multiple North Korean projectiles traveled between 62 to 125 miles but none landed inside Japan’s exclusive economic zone. 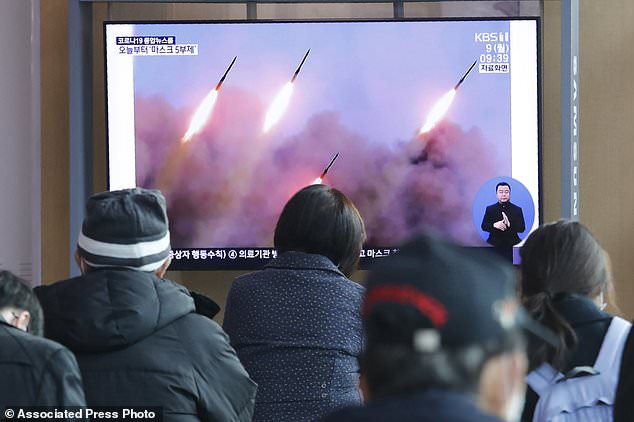 ‘North Korea’s latest action, on top of its repeated firings of ballistic missiles, is a serious threat to the peace and safety of Japan and a grave problem for the entire international society,’ Suga said.

The South Korean Defense Ministry told CNN the launches could be ‘joint strike drills that include multiple types of multiple rocket launchers’ as part of Pyongyang’s winter military drills.

Kim had entered the new year with a vow to bolster his nuclear deterrent and not to be bound by a major weapons test moratorium.

It comes amid a deadlock in a US-led diplomacy aimed at convincing Kim to abandon his nuclear program in return for economic and political benefits. 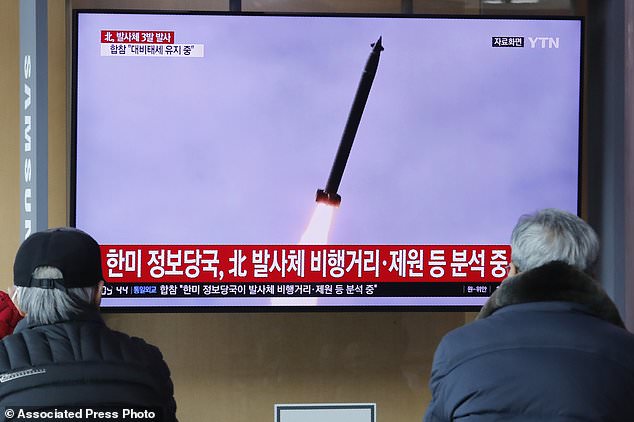 A TV showing a file image of an unspecified North Korea’s missile launch during a news program at the Seoul Railway Station in Seoul, South Korea, today

South Korea and some European countries protested against the second North Korea drills on March 2, which they believe involved ballistic missile launches in a violation of UN Security Council resolutions.

Pyongyang fired two unidentified short-range projectiles from an area near the coastal city of Wonsan, about 65 kilometers (40 miles) south of Sondok, last Monday.

North Korea insists it has the right to conduct military drills in the face of US and South Korean forces on its doorstep. 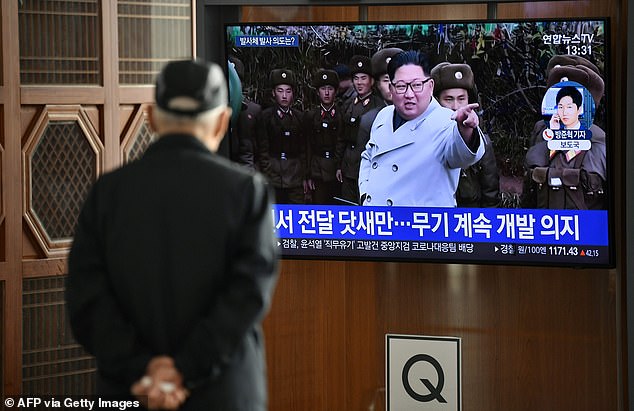 The North’s Foreign Ministry accused the five European countries of ‘repeating an absurd argument of condemnation and violation resolutions of the UN whenever we conducted military drills’ on Saturday.

‘The reckless behavior of these countries instigated by the US will become a fuse that trigger our yet another momentous reaction,’ a ministry statement said.

Her statement was then followed by Kim sending a letter to South Korean President Moon Jae-in expressing condolences over its coronavirus outbreak. 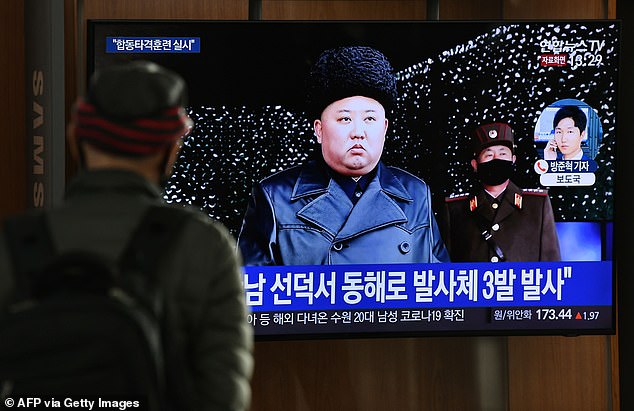 Some experts say North Korea may intend to catch South Korea off balance before seeking help in reviving its economy, since the US has said sanctions on North Korea will stay in place unless it takes significant steps toward denuclearization.

‘At the domestic level, his regime claims to protect the people with drastic quarantine measures and military exercises against external threats.

‘Pyongyang may be seeking international assistance, but remains obsessed with not appearing in an inferior position to Seoul.’

Nuclear talks between Pyongyang and Washington remain stalled since the breakdown of a second summit between Kim and President Donald Trump in Vietnam in early 2019.

Subsequent talks between the two countries failed to produce progress amid disputes over how much sanctions relief should be given in return for a limited step away from nuclear weapons by North Korea.