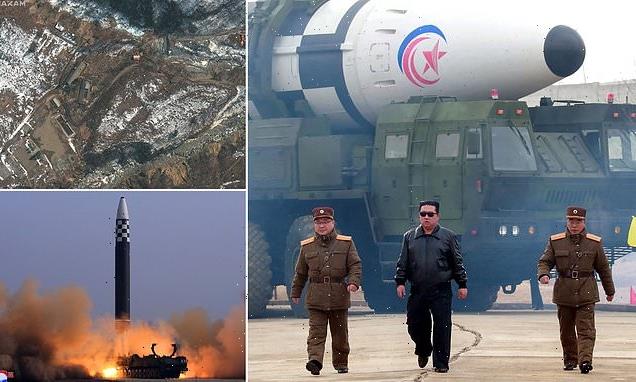 Kim Jong Un’s secretive regime appears to be hastily constructing a ‘shortcut’ to a tunnel at its nuclear test site in Punggye-ri in preparations for a seventh underground nuclear detonation, South Korean news agency Yonhap reported on Sunday.

Warnings of the nuclear test, which would be the first since September 17, come just days after the North test-fired its massive Hwasong-17 intercontinental ballistic missile, which could deliver a warhead anywhere in the United States.

Kim’s latest saber-rattling comes as the world is focused on Russia’s invasion of Ukraine, and adds to the geopolitical challenges facing President Joe Biden. 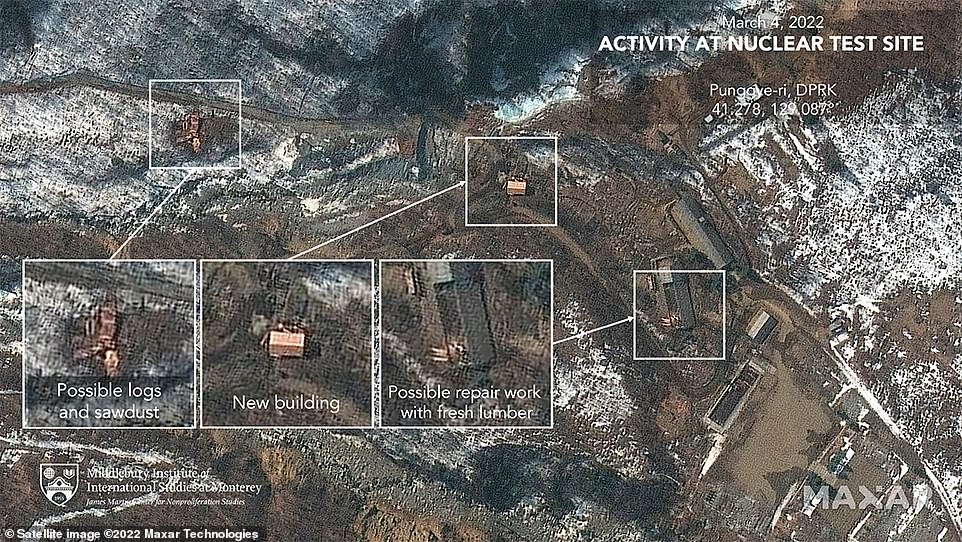 Kim Jong Un’s secretive regime appears to be hastily constructing a ‘shortcut’ to a tunnel at its nuclear test site in Punggye-ri (above) in preparations for a seventh underground nuclear detonation, South Korean government sources say 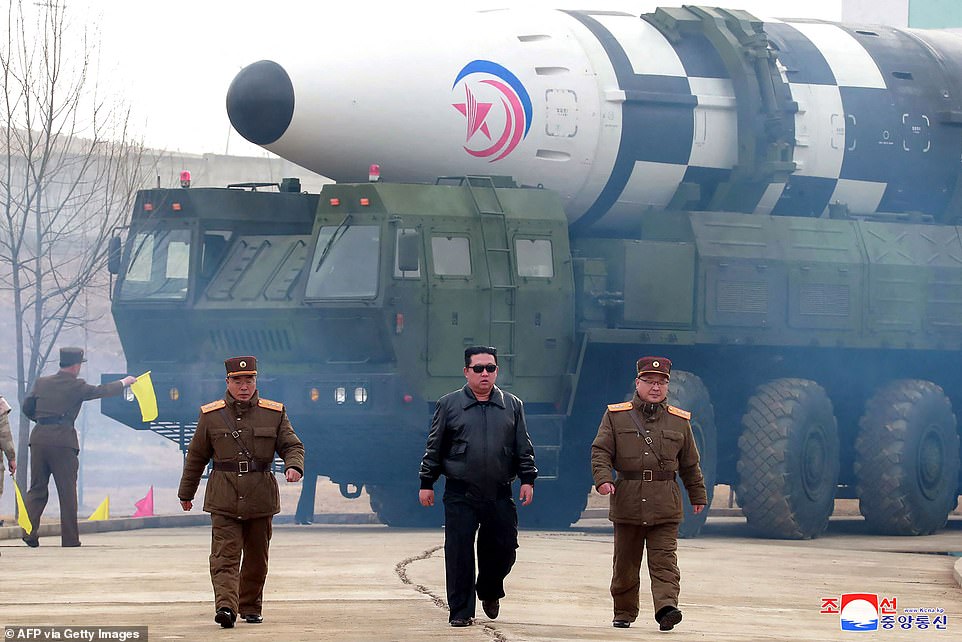 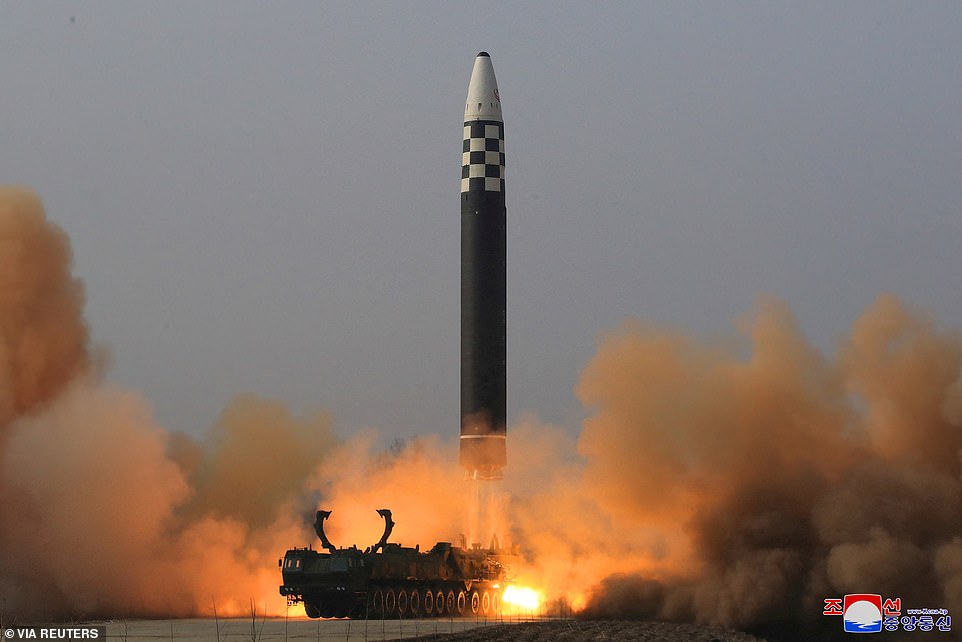 The latest information about North Korea’s nuclear test plans comes from South Korea’s military and intelligence authorities, who say they have detected signs the North is restoring an underground testing facility that was shuttered during negotiations in 2018.

Work at the mountainous site in the country’s northwest appears to have taken a turn that suggests the restoration of access to Tunnel 3 is a high priority.

‘(The North) abruptly stopped its initial construction work to restore the entrance to Tunnel 3, and it is digging up the side (of the tunnel),’ a source told Yonhap, requesting anonymity.

‘In this way, it seems like it will be possible to restore (the testing facilities) in a month.’

Major weapons tests in North Korea often coincide with national holidays, and Kim could be eyeing a nuclear demonstration for Military Foundation Day, which falls on April 25.

Experts tell Yonhap the North may test a small tactical nuclear weapon that can be loaded on ballistic missiles.

Though smaller nukes may seem like less of a threat than massive thermonuclear bombs, arms control experts warn that they can lower the threshold for nuclear deployment, as they are designed to be used in battlefield scenarios.

The Arms Control Association estimates that North Korea currently has around 40 to 50 viable nuclear warheads. 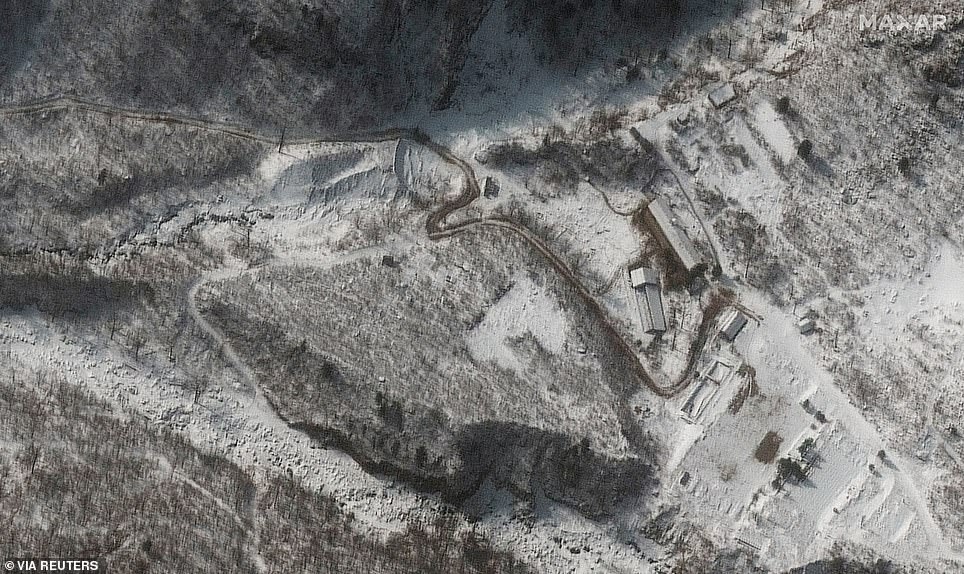 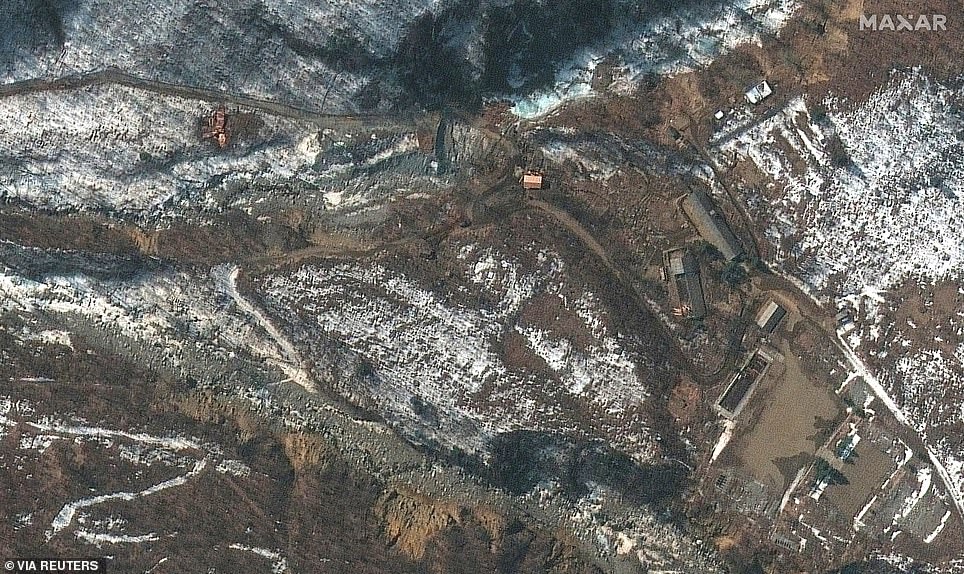 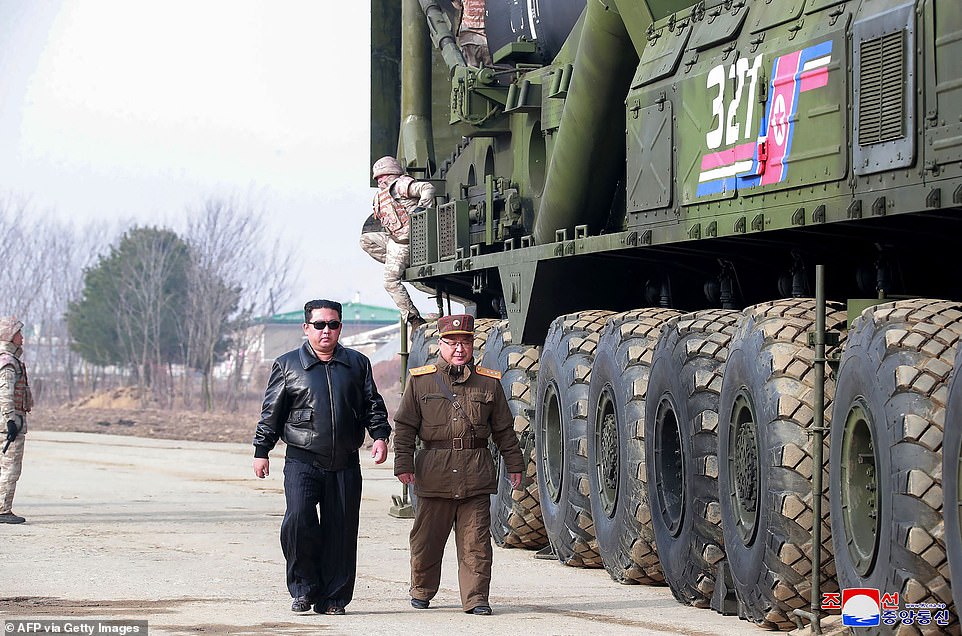 North Korean leader Jim is seen walking around what state media reports say is a new ICBM. It came a day after the militaries of South Korea and Japan said they detected the North launching an ICBM

This photo distributed by the North Korean government shows what it says a Hwasong-17 intercontinental ballistic missile (ICBM) before its test-fire, at an undisclosed location in North Korea on March 24, 2022

On Thursday, North Korea fired its cartoonishly massive Hwasong-17 intercontinental ballistic missile (ICBM) for the first time, demonstrating the capabilities of a weapon potentially able to deliver a nuclear warhead to anywhere in the United States.

The launch Thursday extended a barrage of weapons demonstrations this year that analysts say are aimed at forcing the United States to accept the idea of North Korea as a nuclear power and remove crippling sanctions against its broken economy.

North Korean state TV dramatized the missile testing process like a Hollywood movie, showing Kim walking in slow motion in front of a giant missile in sunglasses and a black leather motorcycle jacket.

After a series of quick cuts of Kim and military officials staring at their watches, Kim takes off his shades and nods, and the missile is shown being rolled out of the hangar.

But analysts said shadows, weather, and other aspects of the imagery suggest the launch shown by North Korea actually happened on a different date and time.

‘Multiple pieces of visual evidence suggest North Korea’s version of events is misleading at best, and possibly a complete fabrication of a successful Hwasong-17 test at worst,’ NK Pro, a Seoul-based research website that tracks North Korea, said in a report.

The Hwasong-17, which was fired at a high angle to avoid the territorial waters of neighbors, reached a maximum altitude of 3,880 miles and traveled 680 miles during a 67-minute flight before landing in waters between North Korea and Japan, Pyongyang´s official Korean Central News Agency said.

KCNA claimed the launch met its technical objectives and proved the ICBM could be operated quickly during wartime conditions.

The South Korean and Japanese militaries had announced similar flight details, which analysts say suggested that the missile could reach targets 9,320 miles away when fired on normal trajectory with a warhead weighing less than a ton. 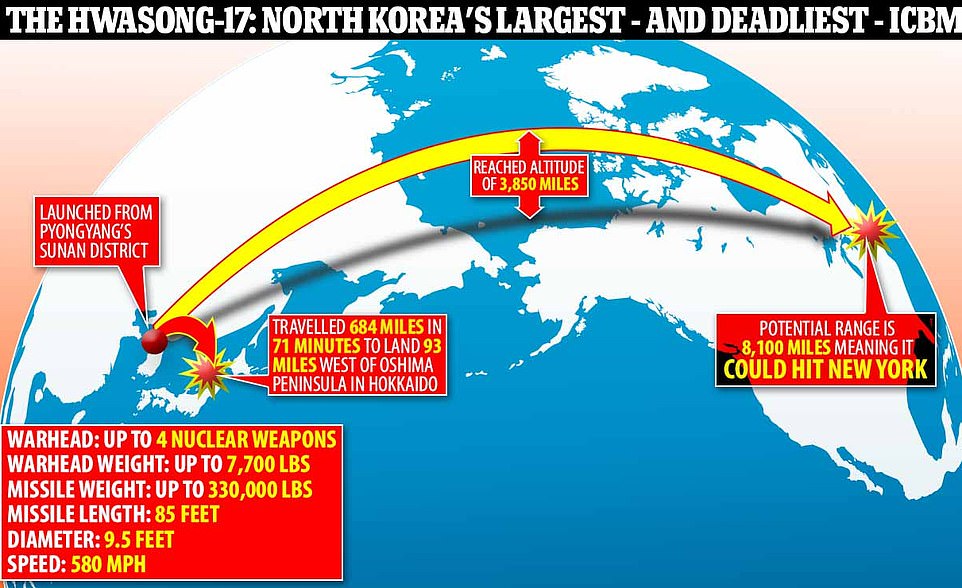 North Korea on Thursday launched its first intercontinental ballistic missile since 2017, one capable of hitting any part of the continental United States, while its Western rival has been focused on rising tensions with Russia amid the war in Ukraine 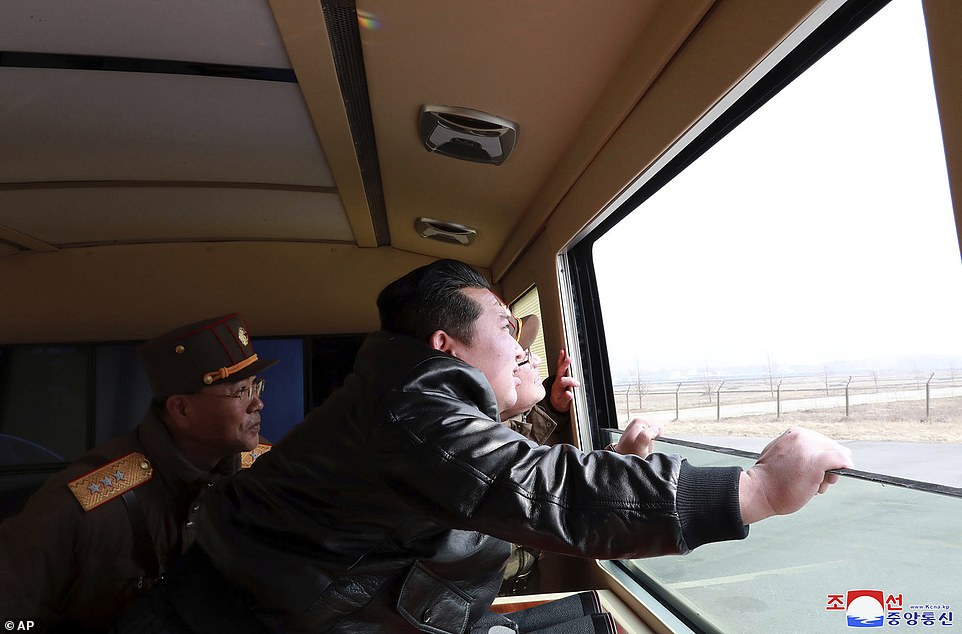 North Korean leader Kim Jong Un looks through a window during the test firing of what state media report is a ‘new type’ of intercontinental ballistic missile, fired on Thursday 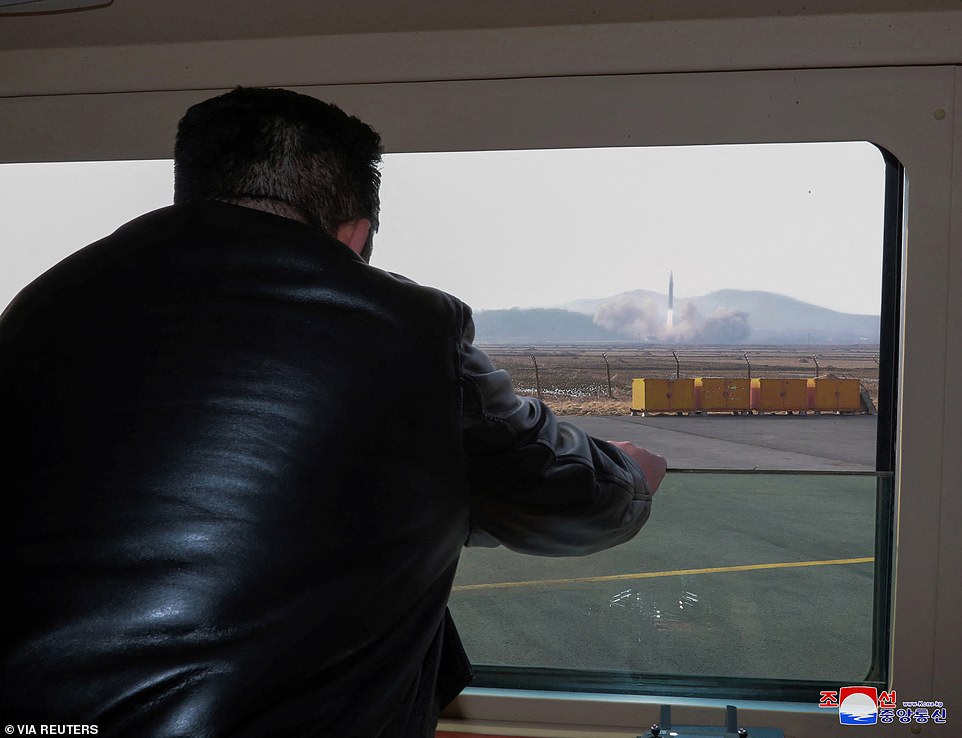 Believed to be about 82ft (25m) long, the Hwasong-17 is the North’s longest-range weapon and, by some estimates, the world’s biggest road-mobile ballistic missile system 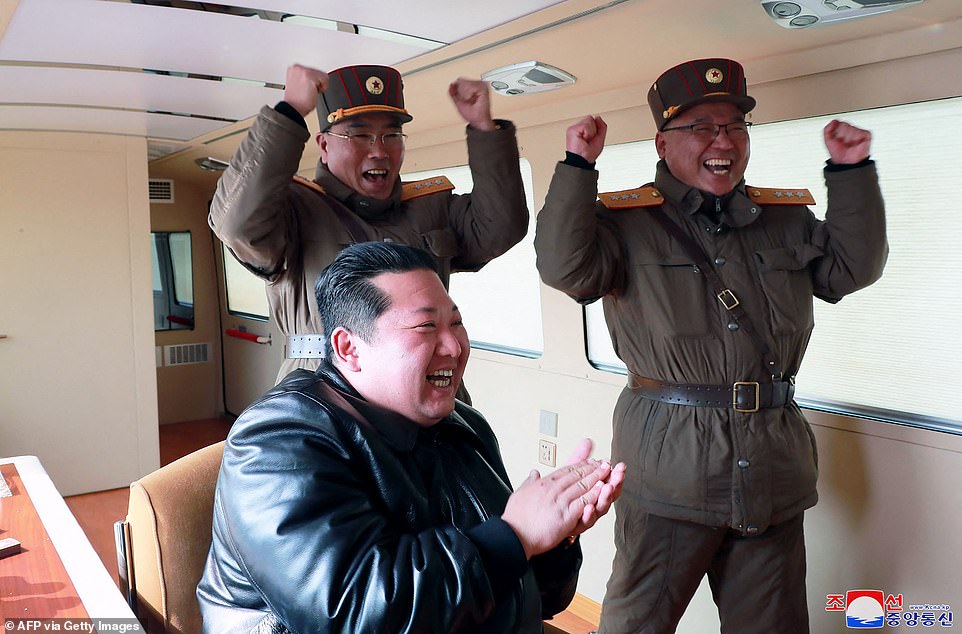 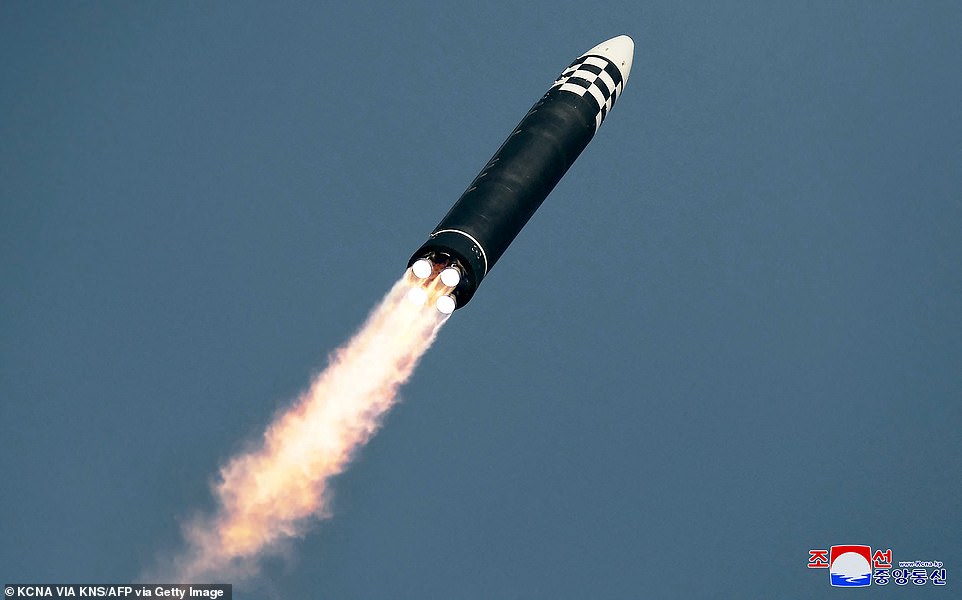 That would place the entire US mainland within Kim’s striking distance, as well as the UK and all of continental Europe.

Believed to be about 82 feet long, the Hwasong-17 is the North´s longest-range weapon and, by some estimates, the world’s biggest road-mobile ballistic missile system.

North Korea revealed the missile in a military parade in October 2020 and Thursday’s launch was its first full-range test.

KCNA paraphrased Kim as saying that the new weapon would make the ‘whole world clearly aware’ of the North´s bolstered nuclear forces.

He vowed for his military to acquire ‘formidable military and technical capabilities unperturbed by any military threat and blackmail and keep themselves fully ready for long-standing confrontation with the U.S. imperialists.’ 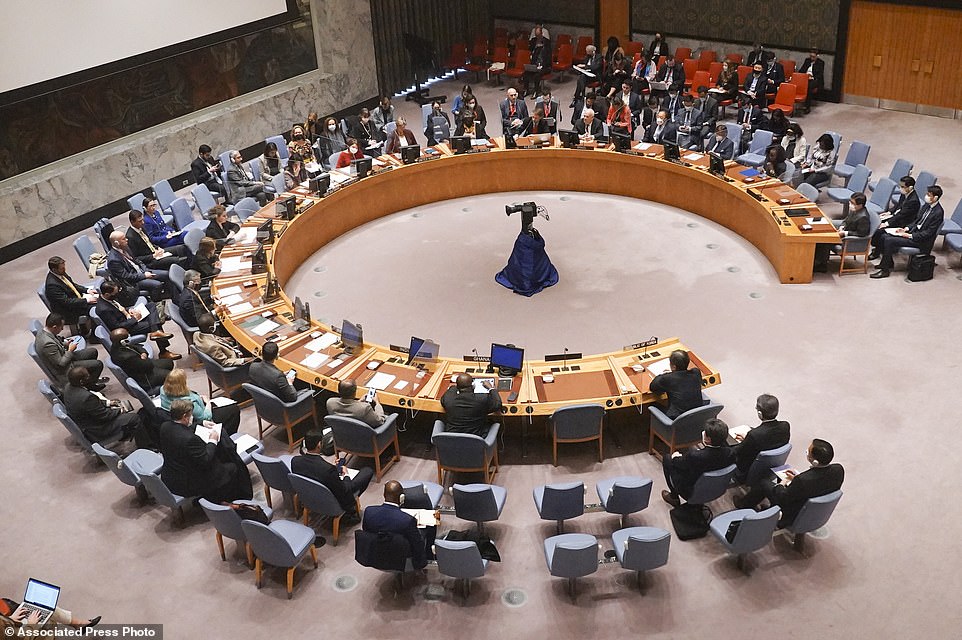 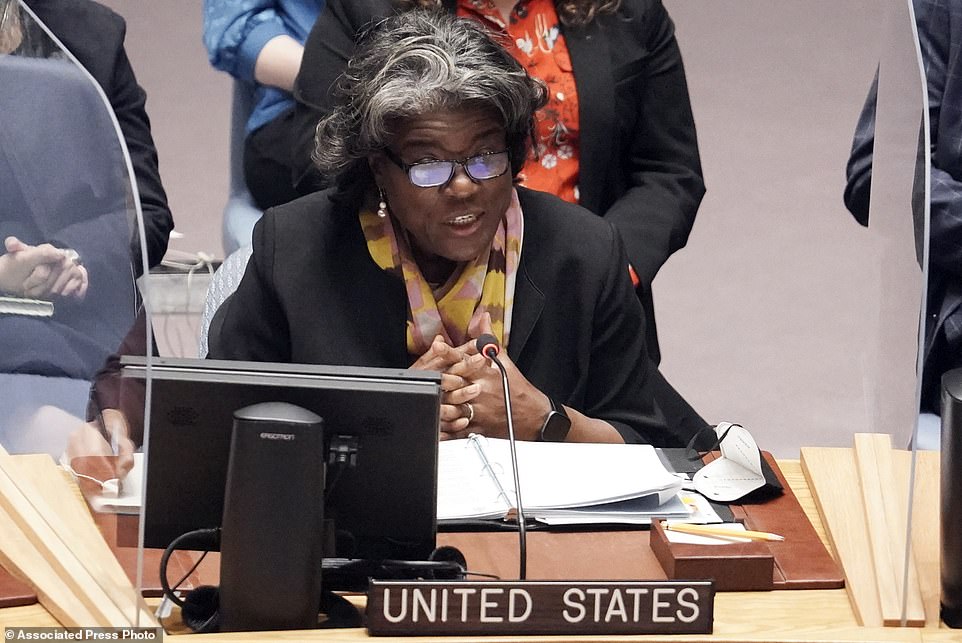 At a U.N. Security Council meeting Friday, U.S. Ambassador Linda Thomas-Greenfield said the U.S. would propose a resolution ‘to update and strengthen’ Security Council sanctions. She declined to specify what those new measures might be.

‘It is clear that remaining silent, in the hope that the DPRK would similarly show restraint, is a failed strategy,’ she said. DPRK is an acronym for the country´s formal name, the Democratic People´s Republic of North Korea.

The council originally imposed sanctions after the North’s first nuclear test explosion in 2006 and tightened them over the years.

But last fall, veto-wielding China and Russia called for lifting various sanctions against their neighbor.

He suggested that the U.S. didn’t do enough to respond to the North´s 2018 self-imposed pause on long-range missile and nuclear tests and needed to ‘show its goodwill’ and ‘work harder to stabilize the situation’ and resume dialogue.

North Korea didn’t speak at the council meeting. A message seeking comment was sent to its U.N. mission.

Meanwhile, the U.S. imposed new sanctions of its own against five entities and individuals in Russia and North Korea over transferring sensitive items to the North’s missile program, State Department spokesperson Ned Price said.