Kim Jong-un has arrived in Beijing for a meeting with China’s President Xi Jinping where he is likely to reveal details of his goundbreaking meeting with Donald Trump.

Security was tight on Tuesday morning as a motorcade including sedans, minibuses, motorcycles and a stretch limo with a golden emblem left Beijing’s airport.

This is the North Korean dictator’s third trip to China this year, coming a week after he met the US President in Singapore for historic talks.

Trump agreed to work with Kim toward complete denuclearisation of the Korean peninsula, committed to provide the North’s regime with security guarantees and pledged to end ‘war games’, which Pyongyang and Beijing have long seen as provocative.

South Korea and the Pentagon announced they would halt the annual Freedom Guardian military drill scheduled for August. 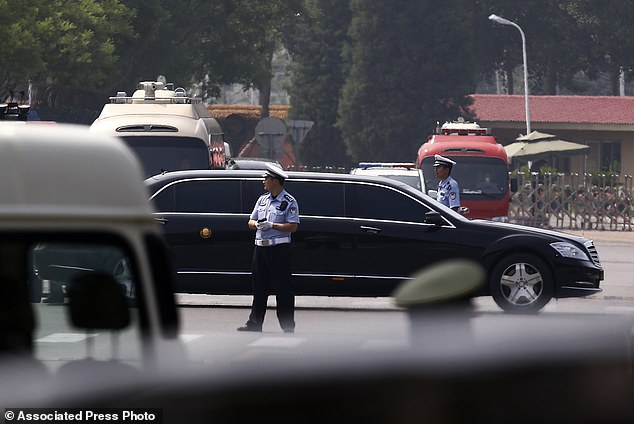 Kim Jong-un has arrived in Beijing for a meeting with China’s President Xi Jinping where he is likely to reveal details of his goundbreaking meeting with Donald Trump. Security was tight on Tuesday morning as a motorcade including sedans, minibuses, motorcycles and a stretch limo with a golden emblem was seen leaving Beijing’s airport 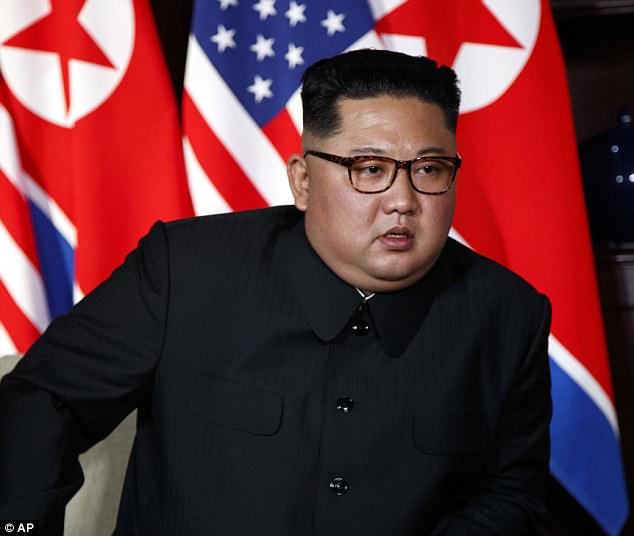 In an unusual move, Chinese state media announced Kim’s visit and said he would stay for two days. Previously China would only confirm Kim had visited after he had left the country. No other details were provided.

A Kim trip to China to discuss his summit with Trump had been widely anticipated in diplomatic circles. China is North Korea’s most important diplomatic and economic backer but has been angered by Pyongyang’s nuclear and missile tests.

Police tightened security along Beijing’s main Changan Avenue, which leads to the Great Hall of the People where Chinese leaders normally meet visiting heads of state, and also outside the Diaoyutai State Guest House, where Kim stayed with his wife during his March visit to Beijing.

Outside the east gate of the Great Hall, where foreign leaders are officially welcomed, authorities had erected a screen running the full length of the road, cutting off the view behind it. 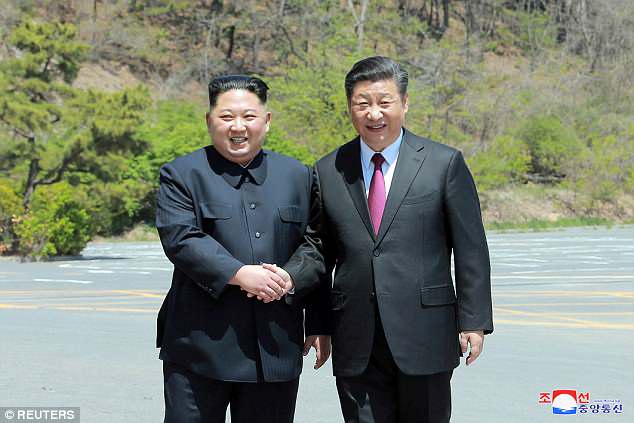 Kim has made two recent visits to China, North Korea’s main ally and key source of trade and economic assistance. Jong-Un is pictured shaking hands with China’s President Xi Jinping in May

China has welcomed the warming of ties between Washington and Pyongyang, and offered to help.

Beijing has been particularly pleased by Trump’s announcement to suspend military drills, which China has long pushed for under its ‘dual suspension’ proposal, whereby North Korea stops weapons tests and the United States and South Korea stop military drills, so both sides can sit down for talks.

‘South Korea and the United States have agreed to suspend all planning activities regarding the Freedom Guardian military drill scheduled for August,’ according to a South Korean defence ministry statement.

A Pentagon statement confirmed the suspension and added that there would be a meeting between the secretaries of defence and state as well as Trump’s national security adviser on the issue this week.

Last year, 17,500 American and more than 50,000 South Korean troops participated in the Ulchi Freedom Guardian drills, although the exercise is mostly focused on computerized simulations rather than live field exercises that use weapons, tanks or aircraft.

The U.S.-South Korean exercise calendar hits a high point every spring with the Foal Eagle and Max Thunder drills, which both wrapped up last month.

The decision to halt military exercises in South Korea has bewildered many current and former U.S. defence officials, who only learned about it when Trump made his remarks after the Singapore meeting. 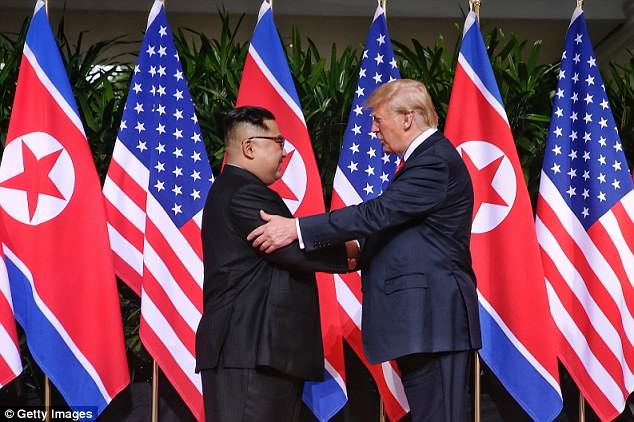 Following his summit with Trump, Kim (both pictured) was expected to meet with Chinese leaders to discuss progress in halting his country’s missile and nuclear weapons programs in exchange for economic incentives

Japan’s Chief Cabinet Secretary Yoshihide Suga said on Tuesday there would be no changes to joint drill plans between the United States and Japan, both of which also engage in regular deterrence exercises against North Korea.

‘The United States is in a position to keep its commitment to its allied nations’ defence and our understanding is there is no change to the U.S. commitment to the Japan-U.S. alliance and the structure of American troops stationed in Japan,’ Suga said in a regular briefing.

The Pentagon has yet to publicly release the cost of previous and future joint military exercises with South Korea, a week after Trump cited their ‘tremendously expensive’ cost as a reason for halting them.

Spending data for previous military exercises in Korea and elsewhere, however, suggest that the cost of a single exercise would be in the low or perhaps tens of millions of dollars in a U.S. military budget this year of nearly $700 billion.

In response to repeated requests for cost data, Pentagon spokesman Lieutenant Colonel Christopher Logan, said: ‘We are currently evaluating the costs of the exercises.’

Calculating the cost of military exercises is a complicated process, often requiring data from different branches of the military and spread over several budgets over different years.

Troops who would have been involved in the exercises would still require training and certification, which would still cost money, said Abraham Denmark, a former deputy assistant secretary of defence for East Asia under President Barack Obama.

‘To me, the idea of this as a cost saving measure doesn’t really make much sense,’ Denmark said.