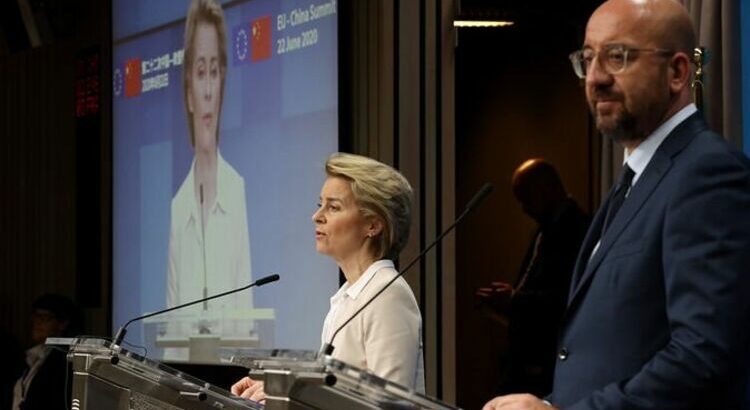 China has so far said it “deeply regrets” the outbreak of war in Ukraine, but has stopped short of condemning Russia on the world stage. Diplomats now say that, despite EU desires for it to be the focus of the conversation, the Chinese leadership “is not keen to talk too much about Ukraine”.

The meeting also comes at a time when tensions between the EU and China are high, after a hardening of diplomatic ties between Beijing and Lithuania over Taiwan.

In its description of the meeting, the European Council said the “main focus of the summit will be on the war in Ukraine”.

It added that EU delegates would bring up “the engagement of the international community to support Ukraine, the dramatic humanitarian crisis created by Russia’s aggression, its destabilising nature for the international order and its inherent global impact.”

However, EU leaders may be set for a disaster meeting as Chinese officials are said to want to steer clear of the issue.

According to Politico, diplomats are now saying that China “is not keen to talk too much about Ukraine” in the meetings.

The Biden administration will reportedly be watching the outcome of the meeting, as US officials are said to be privately concerned the EU is giving China an easy time.

In recent years, Russia and China have enjoyed close relations, with Vladimir Putin and President Xi declaring a “no-limits” friendship earlier this year.

But now, that friendship is under intense pressure as Mr Xi seeks to toe a diplomatic line between China’s ally and its Western trade partners.

A fortnight ago, Chinese foreign minister Wang Yi told his Ukrainian counterpart Dmytro Kuleba China “deeply regrets” the conflict, and was “paying extreme attention to the harm suffered by civilians”.

When the UN voted to condemn Russia for the invasion, China was one of 35 nations that abstained.

However, it did not veto the motion, as Russia did. Beijing has also expressed “unwavering support” for Ukraine’s sovereignty.

China has so far touted itself as a mediator, seeking a peaceful end to the fighting.

At the start of March, Josep Borrell, the European Union’s top foreign spokesperson, said China “must” be responsible for mediating peace negotiations.

This is despite him reportedly having a “very difficult” conversation with Mr Wang over the phone on Tuesday, in preparation for Friday’s meeting.

The EU said it would be looking for “ways to ensure a more balanced and reciprocal trade relationship” with China at the summit, which may be a subtle hint that the EU leadership will bring Lithuania up.

The EU member state had harsh trade blockades placed on it by the Chinese state after Taiwan – a country it pressures others not to recognise as legitimate – opened a new diplomatic office in the Lithuanian capital, Vilnius.

The EU took the issue to the World Trade Organisation on Lithuania’s behalf at the end of January, and Lithuania has withdrawn all its diplomats from China.

The EU accused China of “discriminatory trade practices” against Lithuania, which were “harming exporters both in Lithuania and elsewhere in the EU”.

The diplomatic tensions have pushed the EU to accelerate plans for an anti-coercion instrument that the European Commission wants to allow it to impose retaliatory measures.