Notre Dame was just 30 minutes from completely collapsing before heroic firefighters managed to stop the inferno on Monday night – it has been revealed.

Laurent Nuñez, the French junior interior minister, said a group of around 20 firefighters managed to stop the blaze from spreading to the church’s belfries – which saved 13-tonne bells from tearing apart the remaining structure.

Experts warned officials during Monday night’s disaster that if the wooden belfries fell victim to the blaze, the weight of the bells falling would almost certainly have destroyed the towers below.

Mr Nuñez said firefighters entered the towers ‘at the risk of their lives’ with less than half an hour to spare before the flames chewed through the belfries. 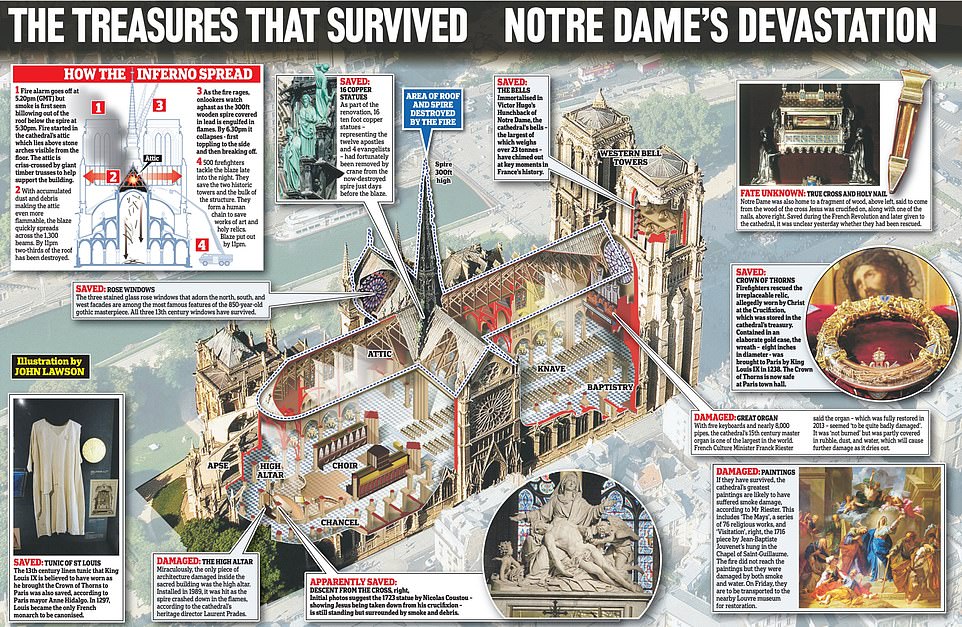 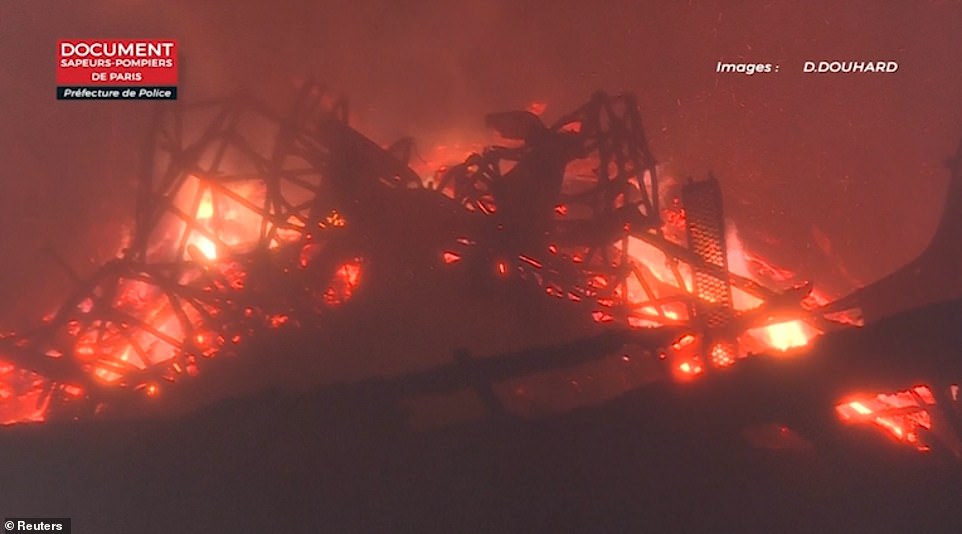 Inferno: The burning interior of Notre Dame cathedral during the horrific blaze in Paris on Monday evening 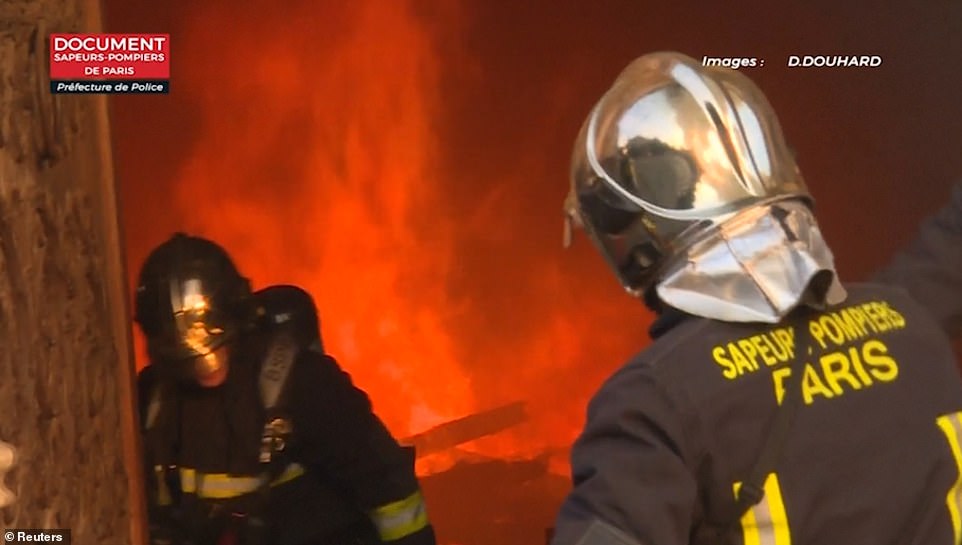 Heroes: Paris firefighters rush into the cathedral to tackle the blaze and save the medieval building from collapse

On Tuesday, the government revealed which treasures survived the fire – with the great organ and several priceless paintings rumoured to have been destroyed.

Franck Riester, France’s culture minister, said on Tuesday that the cathedral’s main organ ‘seems to be quite affected’ by the blaze while the fate of several other artefacts remains unknown.

A British choir performed the last concert at Notre Dame before the devastating fire. Twelve members of I Dodici sang choral works in front of the cathedral’s altar on Monday morning.

A video filmed by an unknown member of the audience shows the sunshine gleaming through the magnificent stained glass. She later sent the footage to the London-based group and told them of her ‘immense pleasure’ at attending the poignant concert with her husband.

She wrote: ‘In light of horrible events now unfolding, we thought you should have this video from what now sadly might be the last concert in the cathedral.’

Conductor of the London-based college choir Gabriel Chernick said it was a ‘real privilege’ to sing in a ‘space which has such a rich history’. Asked how he felt when he heard about the fire, he added: ‘It was devastating, we all became quite emotionally involved having just performed there.’

Firefighters reported that some of the large paintings inside the cathedral were too heavy to take down from the walls and save.

Mr Riester said the paintings were mostly undamaged but many may have suffered some effects from the smoke.

‘The large paintings, at first glance, have not been affected by the fire. But, often in these situations, there is water damage,’ Mr. Riester added.

It comes as it was reported officials attending the Notre Dame blaze initially couldn’t find any sign of fire despite the alarm being raised 23 minutes before the structure went up in flames.

Paris public prosecutor Rémy Heitz announced on Tuesday that firefighters were called to the world-famous cathedral at 6.20pm CET, almost half an hour before the roof caught fire after a fire alarm was triggered.

But after an initial inspection they said they were unable to find any evidence of fire.

Firefighters remained inside Notre Dame until a second alarm went off at 6.43pm and eventually discovered a fire in the network of wooden beams under the cathedral’s roof – but were unable to put it out.

Mr Heitz said this evening: ‘What we know at this stage is that there was an initial alarm at 6:20 p.m., followed by a procedure to verify this but no fire as found.

‘Then, there was a second alarm at 6:43 p.m. and at that point a fire was detected in the structure.

‘The investigation is going to be long and complex,’ he added. ‘We are in the process of interviewing witnesses.’ 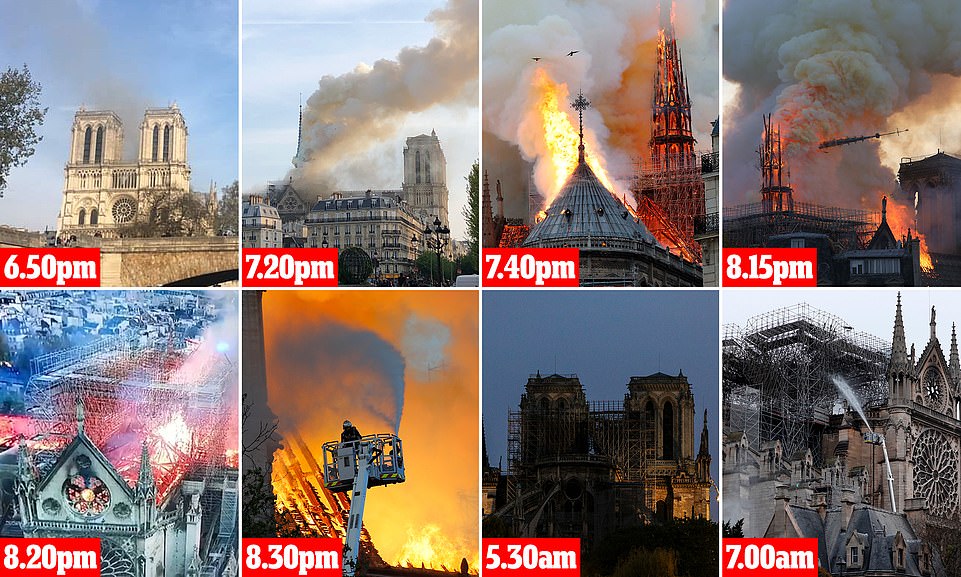 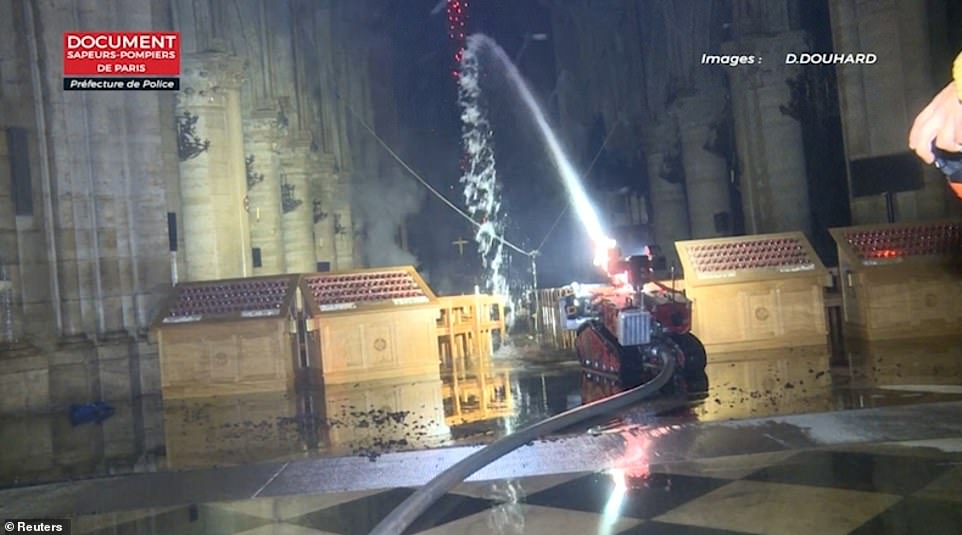