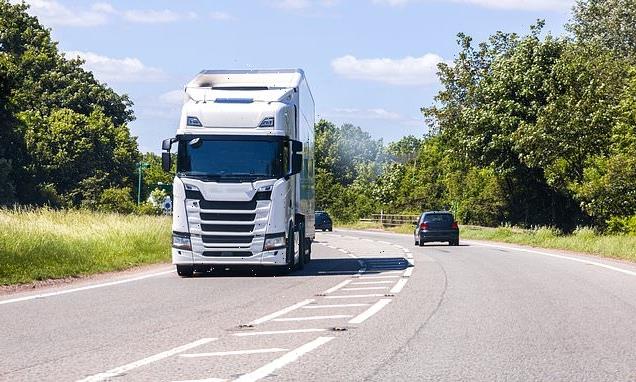 Now delivery driver shortage is a threat to school dinners: Caterers are warned to stock up on food amid fears they could be caught in crisis that may also hit Christmas

Schools are being warned to stock up on food for hot meals over fears they could be caught up in a growing driver shortage that also threatens Christmas.

The end of the holidays next month will add to a crisis that has hit big names including McDonald’s, Nando’s, KFC, and Beefeater.

Deliveries of milk and fresh produce to supermarkets and corner shops have been disrupted, while supplies of canned and bottled drinks are rationed.

The fact that a firm the size of McDonald’s has effectively run out of milkshakes has alerted many to an issue threatening widespread disruption to Christmas.

The Federation of Wholesale Distributors (FWD) warned: ‘Wholesalers are keeping a close eye on availability across the range of products that schools buy, and have been encouraging them to stock up early where possible.

‘They are working closely with schools and suppliers to flag any potential risks.’

Trade bodies such as the British Retail Consortium (BRC) and Logistics UK have warned Business Secretary Kwasi Kwarteng the driver crisis is worsening. 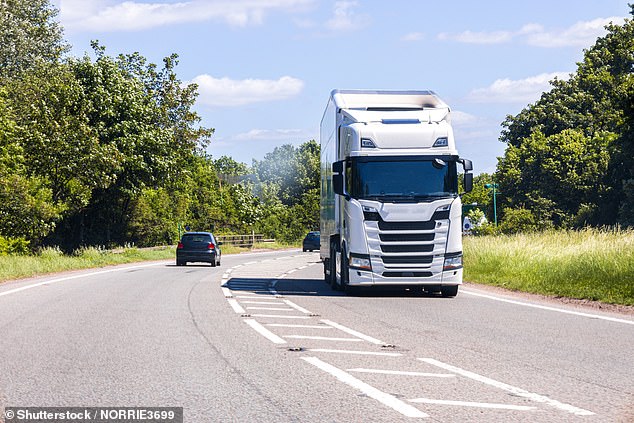 David Visick, FWD communications chief, said: ‘September is going to be an incredibly challenging month for food distributors who are struggling to find enough delivery drivers.

‘Schools come back, workplaces are reopening fully for the first time in months, and the tourist catering trade is still at full capacity.

‘The knock-on effect will be further disruption to food and drink supplies for village shops, local pubs, and all the restaurants which have been unable to trade fully for the last 18 months.’

A shortage of lorry drivers, put at more than 90,000, has disrupted deliveries across the economy, including manufacturing and construction. Experts say it is due to a combination of factors including poor wages, the closure of a tax loophole for some drivers, and EU employees returning home after Brexit.

Lockdown hit the training of drivers and 40,000 HGV tests were cancelled.

Mr Visick said: ‘We’re asking the Government to look at introducing a temporary visa to allow HGV drivers from the EU to fill vacancies in food supply in the months from now until Christmas.’

The issue has hit household names. McDonald’s said: ‘Bottled drinks and milkshakes are unavailable in restaurants across England, Scotland and Wales.’ Last week, Nando’s was forced to shut 50 outlets because of a problem with deliveries, while many KFC outlets cut the number of items on the menu. 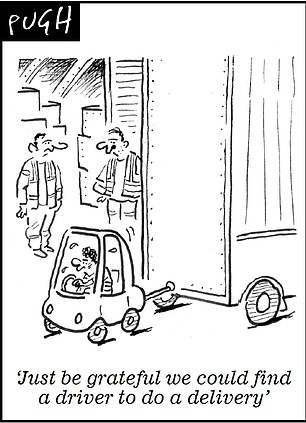 A poster up in one Beefeater restaurant read: ‘Due to circumstances beyond our control involving supply chain/Brexit, we are experiencing unheard levels of unavailability across a number of products.’

Helen Dickinson, BRC chief executive, said: ‘It is consumers who will suffer.

‘Retailers are increasing pay rates, offering bonuses and introducing driver training schemes, as well as directly supporting suppliers in the movement of goods, but Government will need to play its part.

‘We are calling on the Government to rapidly increase the number of HGV tests, provide temporary visas for EU drivers and make changes on how HGV driver training can be funded.’

Rod McKenzie, of the Road Haulage Association, said: ‘We are not being doom-mongers, but there is a clear and present danger caused by the effects of the lorry driver shortage, which is acute, and the Brexit trade deal.’

The Government urged firms to train Britons. A spokesman said: ‘Employers should invest in our domestic workforce instead of relying on labour from abroad.

‘We recently announced measures to tackle the HGV driver shortage, including plans to streamline the process for new drivers to gain their licence and increase the number of tests.

‘We have also temporarily relaxed rules to allow drivers to make longer journeys, but these must only be used where necessary and must not compromise safety.’