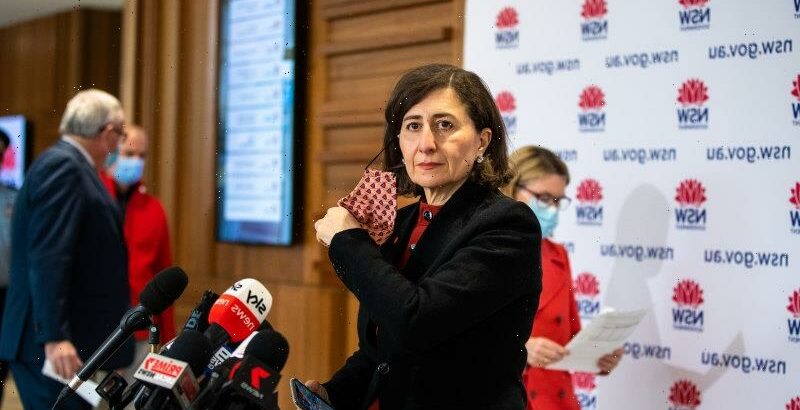 NSW has reported 283 new local coronavirus cases, while Tamworth will enter a week-long lockdown after a case visited the area.

Premier Gladys Berejiklian confirmed there had been no incidents of transmission in Tamworth, but a person had travelled to the area from Newcastle while unknowingly infectious, resulting in a number of exposure sites. 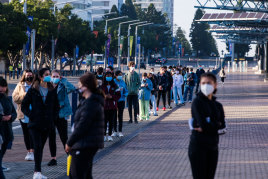 Hundreds of Year 12 students queue for their first dose of the Pfizer vaccine at Qudos Bank Arena on Monday morning.Credit:James Brickwood

The lockdown will begin at 5pm today. NSW Chief Health Officer Kerry Chant said a woman who was exposed to COVID-19 in Newcastle travelled to Tamworth on August 4.

At least 106 of NSW’s new cases were in the community during their infectious period.

A woman in her 90s from northern Sydney died at Greenwich Hospital on Sunday. The Premier said the woman was unvaccinated. 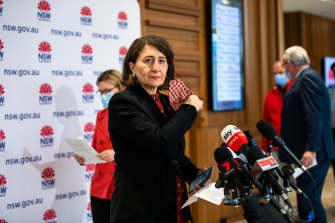 “All deaths are horrible during this time and, again, we extend our deepest sympathy to her loved ones at this difficult time,” she said.

The Premier said the “epicentre” of the virus continues to be Sydney’s western and south-west suburbs.

Kingswood High School, in Sydney’s west, closed for cleaning and contact tracing on Monday after a member of the school community tested positive for COVID-19.

“All staff and students of Kingswood High School are asked to self-isolate until they receive further advice,” a NSW Education spokesperson said.

Kingswood was one of 12 suburbs in Penrith added to the local government areas of concern yesterday. In a letter to the community on Sunday, the school’s principal, Adam Forbes, said the “vast majority” of students reside in the identified suburbs.

Meanwhile, hundreds of teenagers have been arriving at Qudos Bank Arena, at Sydney Olympic Park, this morning as the state’s vaccination program for HSC students from hotspot area begins.

Western Sydney Health said there were 24,000 first-dose appointments for eligible students from August 9 to 14 at the Olympic Park venue. Today was fully booked with almost 3000 students expected, the health district wrote on Facebook.

Health officials are contacting people who were in the waiting area of Northern Beaches Hospital for a brief period on Saturday night, after it was visited by a COVID-positive family member of a case receiving treatment.

A Belrose man in his 30s was admitted and moved to the intensive care unit at the hospital on Saturday, where he remains in a critical condition.

A family member of the man, who also had tested positive to COVID-19, later arrived at the hospital and was in the waiting area for five minutes, the hospital said in a statement.

“Once staff became aware of the risk, they were immediately taken to an isolation area. People who were in the waiting area at the time are being contacted.”

Northern Beaches Hospital chief executive Andrew Newton urged patients to be truthful with screening staff if they have been to a hotspot or are a close contact of a case, adding he wanted to promote a culture of support, not blame.

In a Facebook post on Sunday night, Mr Newton acknowledged it was “only natural” to want to be with sick loved ones and the hospital would try to provide support in such situations.

“This can be somewhat heartbreaking at times, especially when people have loved ones as patients, some of who are particularly unwell,” he said.

Exposure sites in western Sydney as well as multiple suburbs of Newcastle were added to NSW Health’s list on Sunday evening.

There were 11 new local cases reported in Victoria on Monday. All were linked to known cases but only one was in isolation for their entire infectious period.