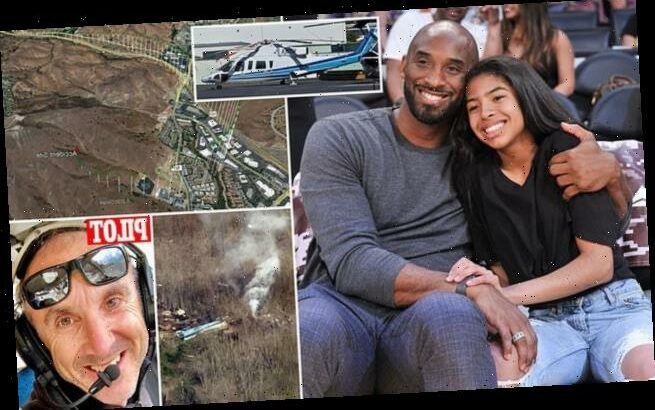 Kobe Bryant pilot ‘didn’t know which way was up’ after ignoring weather warnings and federal safety standards to fly NBA legend, his daughter and seven others through thick fog – as officials prepare to deliver crash verdict

The helicopter pilot who flew Kobe Bryant, his daughter Gianna and seven others into a Calabasas hillside last January ‘didn’t know which was up’ after flying them into thick fog which had grounded other air traffic that day, NTSB officials said on Tuesday – as they met to officially rule on a cause for the crash that killed all nine people on board.

They were in a Sikorsky S-76B helicopter with two of Gianna’s basketball teammates, their parents and their coach, and were flying to the Mamba Sports Academy in Thousand Oaks when the aircraft plowed into a hillside shortly before 10am.

Until now, the only possible explanation has been that the pilot, Ara Zobayan, was disoriented as a result of poor visibility caused by thick fog which had grounded almost all other air traffic that morning. There has never been any evidence of mechanical failure, suggesting pilot error was the likely cause of the crash.

The NTSB is holding a virtual meeting to officially rule on the crash, which began at 9.30am EST. The meeting is expected to last throughout the morning, with members making presentations before a decision is reached.

At the start of the meeting, officials said they will discuss whether Zobayan was under pressure from Island Express, the company that owned the helicopter and who he worked for, to complete the flight, or if he put pressure on himself not to let Bryant down.

They also discussed the fact that Island Express was only legally allowed to operate charter flight under VFR – Visual Flight Rules – which are an industry standard set of conditions which essentially means a pilot can only in good or clear weather. On January 26, VFR did not apply because of the fog.

Some called the accident preventable. Others said Zobayan abandoning his training when he got into trouble and should have tried to make a safe landing at an airport rather than fly the group out of clouds when he couldn’t make sense of where he was going.

‘I’m really saddened by this crash and we use the term crash rather than accident and I think it’s important to understand the distinction. An accident is just something that’s unforeseen, unpredictable, if you will.

‘Unfortunately this wasn’t. We pretty well know what happened. We have a very good idea of why it happened and we absolutely know how to prevent it,’ NTSB Vice Chairman Bruce Landsberg said. 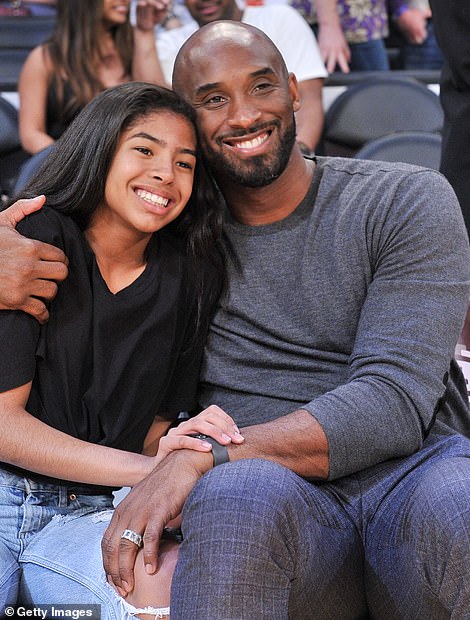 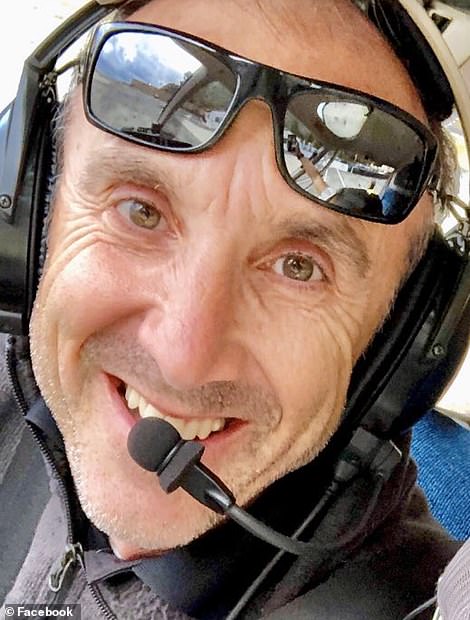 Kobe Bryant and his daughter Gianna, 13, were killed along with seven others in a helicopter crash last January. On Tuesday, NTSB officials will discuss whether pilot Ara Zobayan was under pressure from his bosses at Island Express to complete the flight in spite of poor visibility 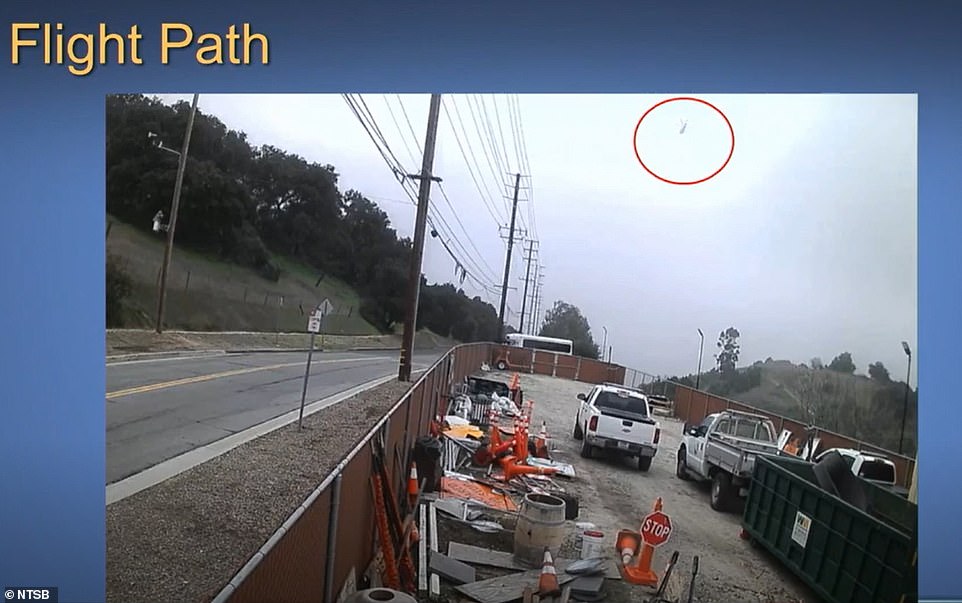 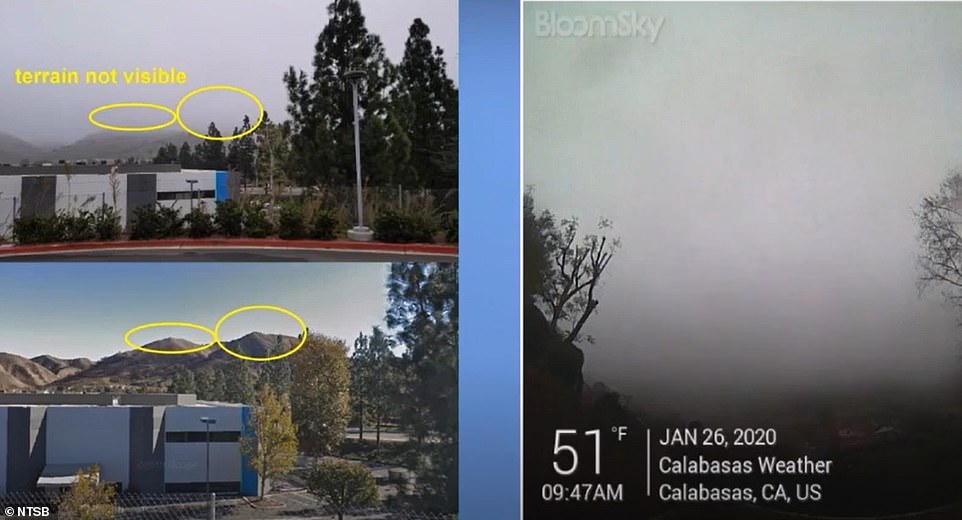 Another slide from the meeting shows how the hillside that the pilot flew into (bottom left) are normally visible. Right, the fog on the day of the crash 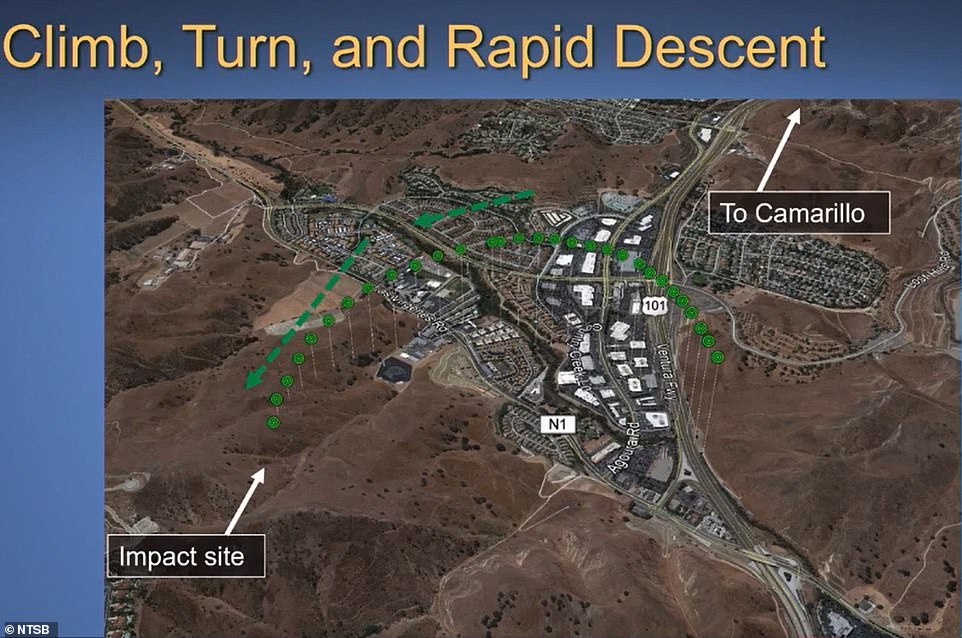 The helicopter was in a tightening left turn and descending rapidly. This maneuver is consistent with the pilot experiencing spatial disorientation and limited visibility conditions 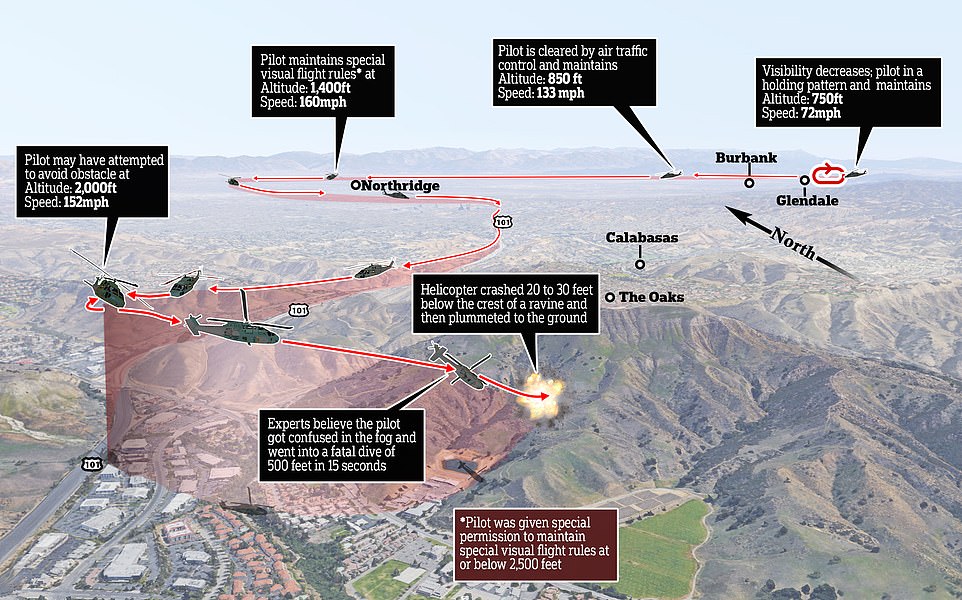 The first problem, the officials ruled, was that the pilot should never have taken the aircraft off the ground under the conditions that were present on January 26.

The thick fog meant that most air traffic across the city had been grounded, even LAPD helicopters.

The pilot was not qualified to fly in poor conditions – few are – but chose to anyway, abandoning VFR, which is the federal standard set of guidelines.

‘This weather didn’t sneak up on the pilot quickly. They had a very easy alternative of landing at Van Nuys airport It was 10 to 12 miles behind them, just a few minutes of flying time,’ one of the NTSB board members said.

‘As long as we have VFR helicopters continuing to flirt with marginal weather, limited visibility…a certain percentage of them will not come out alive,’ one said.

‘The lesson to be learned is for pilots to take this risk seriously and adhere to their training.’ 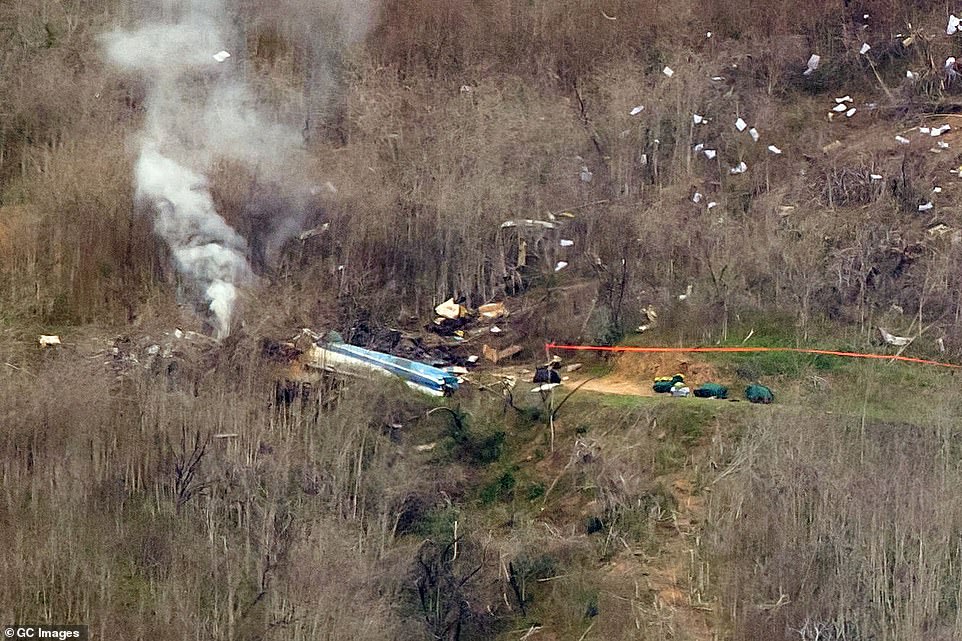 This was the scene on the hillside in Calabasas after the crash at 9.45am on January 26, 2020. There were no survivors

During questioning, NTSB member Michael Graham asked lead investigator, Bill English, if the pilot climbed straight ahead when he penetrated the weather?

English responded: ‘No, sir. The climb was a subtle left turn.’

Graham: ‘He didn’t follow his training. Do you feel he committed to the instruments in this case?’

English said: ‘The passive behavior of the helicopter is not consistent with committing to the instruments.’

In essence, English ruled that Zobayan had abandoned his training.

ABANDONED HIS TRAINING TO KEEP FLYING ONCE HE GOT INTO TROUBLE

Once in the air, despite the fact he shouldn’t have been, the officials said the pilot should have done a number of things that he didn’t.

‘Such illusions can trigger a pilot’s perception to believe he is flying straight and level, but in this case the pilot was on a steady left turn conducive for the pilot to experience “the leans”,’ Dr. Sullivan said.

They also said he could have declared an emergency or turned back to Van Nuys airport but didn’t. 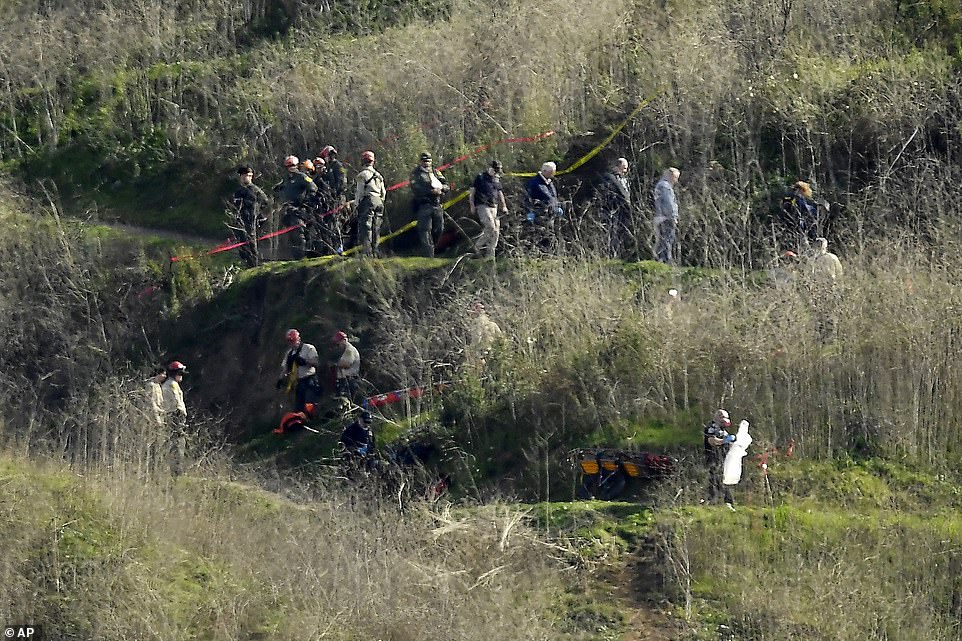 Investigators spent days working through the wreckage. Bryant was identified by his finger prints on January 28

‘PUT HIMSELF UNDER PRESSURE BECAUSE HE WAS KOBE’S FAVORITE’

Other members argued that ‘self-induced’ pressure may have contributed to Zobayan going ahead with the flight.

He was Bryant’s favorite pilot and was so trusted by the NBA legend that he’d flown his kids without him on board.

Dr Dujuan B. Sevillian, one of the NTSB members, said: ‘The objective evidence that we collected with Island Express was through interviews and with those interviews let us know that the relationships between the pilot and the client had turned into a friendship over the years.’

Sevillian said that the ‘client allowed the pilot to fly his children without him being present and that type of relationship that they had was very close’.

Sevillian continued: ‘When we look at human factors psychology we look at the decisions people make based off the perception of the situation. In this case the pilot as he was flying in route, this type of relationship that he had with the client can lead to self-induced pressure during the en route portion of the flight so that is why the objective evidence from the interviews helped us understand that relationship and the effect it can have on pilot decision-making.’

‘This self-induced pressure can adversely affect pilot decision-making and judgment,’ one said.

Lead investigator, Bill English, explained to the NTSB: ‘It would call for some speculation but if you are asking about making this flight under IFR appropriate certified IFR operations this would not have been a difficult flight.’

NTSB Chairman Robert Sumwalt added: ‘That’s right because instead of trying to stay under the clouds, you could have climbed up into the clouds and flown legally and safely if the pilot was properly trained… Is that correct?’

English: ‘Yes, that is correct.’

Island Express, the company, was only allowed to operate flights under VFR. Officials said on Tuesday that the pilot was not sleep-deprived or impaired, had completed the adequate training and had flown enough, and that he flew through clouds despite not being allowed to.

‘Island Express Helicopers was operating on an FAA approved operation specification document that authorizes the pilots to conduct on demand day and night visual flight rules only flights.

‘The company had 25 employees and operated six helicopters. Island express was experienced in conducting charter flights. In 2019 a month they flew for 95 charter flights many catering to high-profile clients.

‘John Wayne-Orange County Airport occasionally received flight request from a broker who use them exclusively for the accident client local transportation request.

‘The pilot was certificated current and qualified to fly visual flight rules in a coordinates,’ one of the NTSB officials said at the start of the meeting. 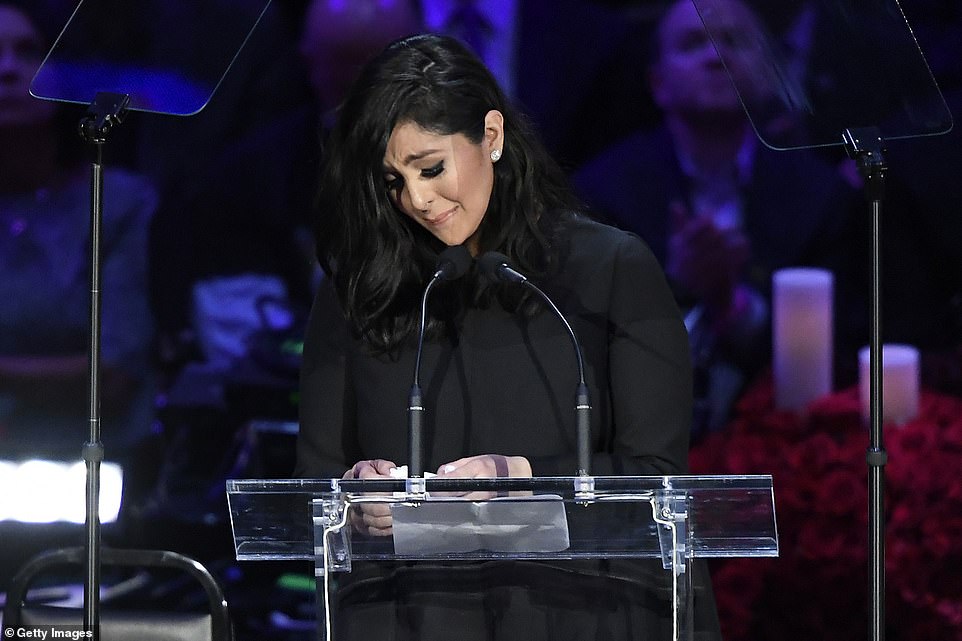 Vanessa Bryant speaks during The Celebration of Life for Kobe & Gianna Bryant at Staples Center on February 24, 2020.  She has already filed a wrongful death lawsuit against Island Express, the company that operated the flight

The full crash report has not yet been released and won’t be until the end of the meeting. Then, officials are expected to take questions about it.

The night before the crash, Bryant’s assistant moved the flight – at his request – to 45 minutes earlier than it had been scheduled.

Originally, the group was due to depart from Orange County at 9.45am but he changed it to to 9am because he wanted to watch the other basketball game.

They’d been in the air for 39 minutes when the pilot crashed at 9.45am.

In the days that followed, an NTSB board member told reporters that clouds and fog causing limited visibility in the foothills north of Los Angeles would likely be a key focus of the investigation.

The board said previously an examination of the helicopter’s engines and rotors found no evidence of ‘catastrophic mechanical failure’ that could explain why the airship would have plunged into the terrain.

Bryant was not formally identified until two days after the crash and officials had to use his fingerprints to do it. His wife Vanessa and three other daughters – Natalia, 18, Bianka, four, and Capri, one – were at home.

The others on board were Gianna’s teammates Alyssa Altobelli and Payton Chester, Alyssa’s parents, John and Keri Altobelli, Payton’s mother Sarah Chester and their coach Christina Mauser.